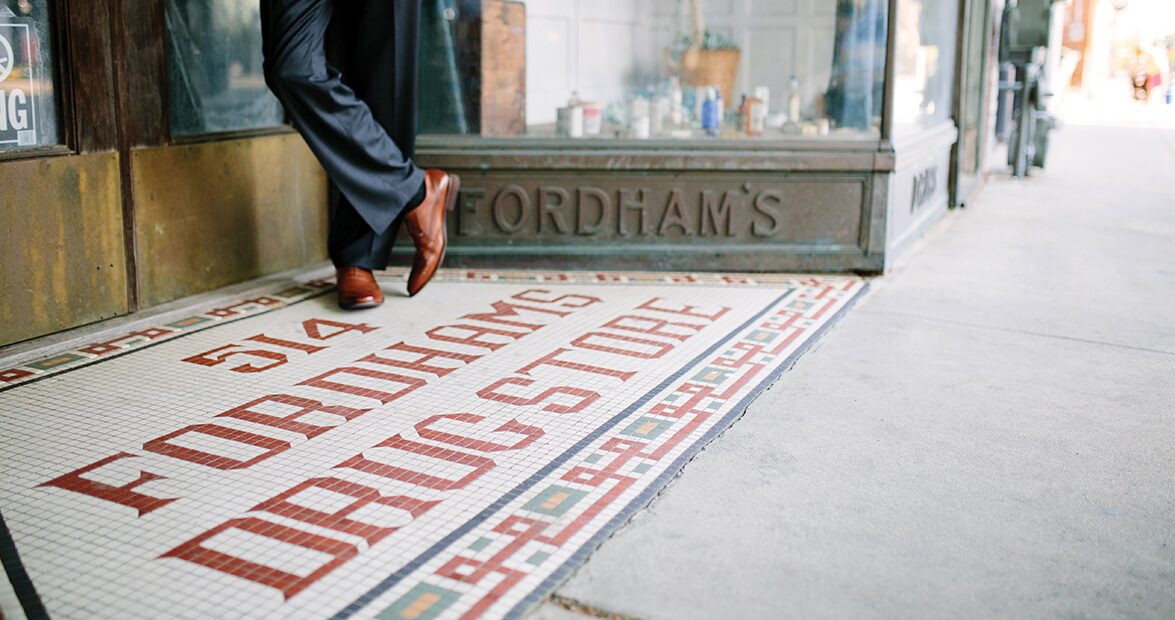 Pump two or three squirts of Coca-Cola syrup into a glass three-quarters full of ice. Fill with carbonated water. Serve at a soda fountain inside a drugstore known for delighting its customers for more than 100 years.

What you get is a sweet memory, one that’s guaranteed to last.

Dottie Serafin would like it better, though, if you added a bit of cherry to her glass. She was a cherry Coke fan back in the ’60s, when she, her sister, and her two cousins were regulars at Fordham’s Drug Store, beyond the railroad tracks on South Elm Street in downtown Greensboro.

“They mixed it right in front of you,” Serafin says. “The farther down you got in the drink, the more syrupy it was.”

She enjoyed a glass of cherry Coke with a new comic book — preferably Archie — a reward from her mother for good behavior.

Cherry Coke was among the beverages of choice at Fordham’s. The others were Cherry Smash, vanilla Coke, and Coca-Cola, or Co’Cola, as customers often called it. Yet as popular as the fountain Cokes proved to be, the drugstore’s original owner, Christopher Columbus Fordham, rejected initial offers from the soda company. A Coca-Cola salesman offered him a taste of the new beverage, which had been invented in 1886 by a pharmacist in Atlanta. Fordham tasted it, and said no thanks: This would never sell.

But sell it did, everywhere, and eventually at Fordham’s. Here, it was mixed, in the early years, using the area’s first Coke dispenser: an ornate white china container.

“I know that’s where I learned the art of dealing with strangers, how to speak their language …”

Fordham’s opened on South Elm Street as Grissom & Fordham on July 21, 1898, during the heyday of downtown pharmacies. In 1903, C.C. Fordham bought the pharmacy outright, and it became simply Fordham’s Drug Store. The business remained in the Fordham family until the founder’s son, C.C. Fordham Jr., died in 1969. Through the years, the soda jerks at Fordham’s mixed a lot of memories — a 1985 newspaper story mentions a lavender malted milkshake “good enough to defy calories” — and they became as much of a fixture there as the fountain itself.

One, soda jerk Christopher Columbus Fordham III, later served as chancellor of the University of North Carolina at Chapel Hill.

Brad Cherson, whose father, Arnold, was the first person outside the Fordham family to run the drugstore, also spent time behind the counter.

“The hardest part was learning all the special drinks, ice creams, and ways our customers wanted their orders,” says Cherson, who’s now a pharmacist. “I know that’s where I learned the art of dealing with strangers, how to speak their language and relate to all types of people. All that from a soda fountain.”

Perhaps the best known of the drugstore’s front men was a preacher, fiddler, and poet named Charlie Sharpe, who worked at Fordham’s from 1960 to 1991.

A newspaper account describes how Sharpe came to be a soda jerk at Fordham’s: He was downtown, helping some Salvation Army members conduct services at the county jailhouse, when he dropped into the drugstore for a Coke. “I laid my fiddle down on the counter here,” Sharpe told the reporter.

“Mr. C.C. Fordham was behind the counter then … and we got in a conversation about my fiddle. Before I left, he told me he didn’t know what I was doing then, but he’d give me $5 more a week to come down here and work on the front end of this drug store.”

Sharpe became known not only for his fountain drinks, but also for his poetry. Sometimes he combined the two. His poem “A Soda Jerk’s Prayer” was posted in the drugstore and published in his book, Poems from the Heart of Olde Greensborough.

Father, I thank Thee for placing me
Behind this marble altar.
Keep me in the hollow of Thy Hand
Lest I sin or lest I falter.
Let me see Thine image in every soul
That lays a nickel on this bar.

Two pharmacists, Eddie Tuck and Jeff Biggs, bought the business in 1991, and the building not long afterward. They kept the drugstore running the way it always had, until it closed in 2002. A “For Sale by Owner” sign went up in late 2015.

Throughout its 104 years of operation, the drugstore remained an architectural marvel, designed in an Italianate style with apothecary urns and a large mortar and pestle crowning the roof. The inside was adorned with mosaic tile, wooden floors, a decorative tin ceiling, and a watch repair stand just inside the door.

Jeanne Davis, who owns a nearby building, says she’s been impressed with the decor at Fordham’s since she was a child. She talks about spinning on the barstools and finding the counter’s stone slab especially welcome in the summer.

“I will always remember how cool it felt on a hot day,” she says. “The bar back, the counters, the stools, jars and drawers full of magic, the stained glass, and the tiling. The smell and the feel go back a long way.”