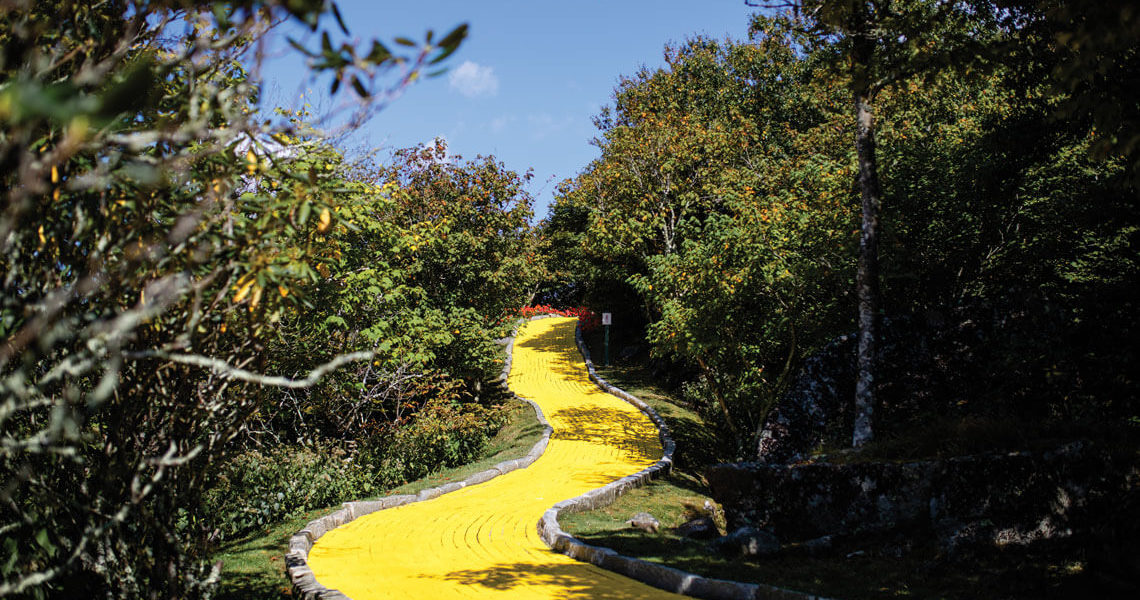 Land of Oz creators hoped that Judy Garland would cut the ribbon, but she died the summer before the park opened. To honor her memory, they built a gazebo looking out over the sweeping Elk Valley. photograph by Revival Creatives

In the warm months, the once-snowy slopes of Beech Mountain turn green, the hardy trees that thrive at 5,506 feet leafing out to cocoon a magical place at the top of the mountain: the Land of Oz. More than 50 years ago, Grover Robbins, one of the developers who started Beech Mountain Resort, hired Jack Pentes, an artist from Charlotte, to design a theme park that would draw visitors year-round, not just during ski season. The two men drove to the peak, “and then,” Pentes said in a 1971 program, “the trees grabbed me, those beautiful trees that couldn’t be anywhere else — except for the feeling that I had seen them [before].” They continued to explore until Pentes realized, “This is the Land of Oz!” It was the only idea Robbins needed to hear. When the park was completed in 1970, it harmonized with nature, just as Pentes had envisioned — lying cradled within the land on Beech Mountain, as if the Land of Oz had always been there. 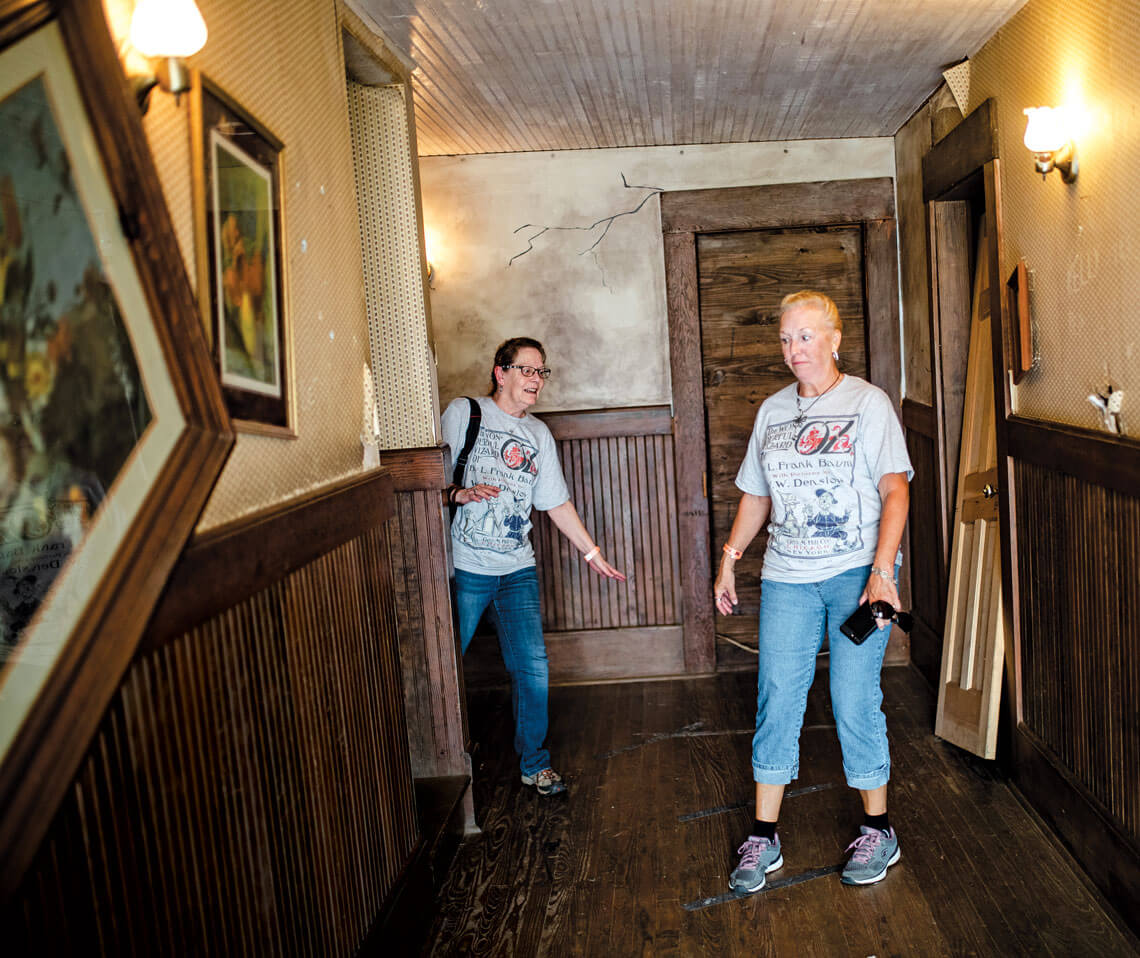 After Dorothy’s house “crash-lands” in Oz, the once-tidy rooms are thrown into disarray, and the sloping floors usher visitors to the next part of their adventure. photograph by Revival Creatives

In 1970, Land of Oz opened to great fanfare: Actress Debbie Reynolds and a 13-year-old Carrie Fisher attended the grand opening to cut the ribbon, and, that first season, 400,000 visitors rode up Beech Mountain by bus or ski lift. At the top, they followed a path through the woods to Uncle Henry and Aunt Em’s farmhouse, exploring rooms carefully decorated to look like a turn-of-the-century Kansas home. But when they descended into the storm cellar, the furniture began to shake, the wind kicked up, and psychedelic colors swirled as the house was swept up in a “tornado.” On the other side of the cellar corridor, visitors emerged, slightly dazed, to find a mirror image of the rooms they’d just passed through — only this time, the floors tilted at a 15-degree angle, artwork hung askew, and doors were blown from their hinges. Those visitors surely weren’t in Beech Mountain anymore: Just beyond the back door lay the Yellow Brick Road. 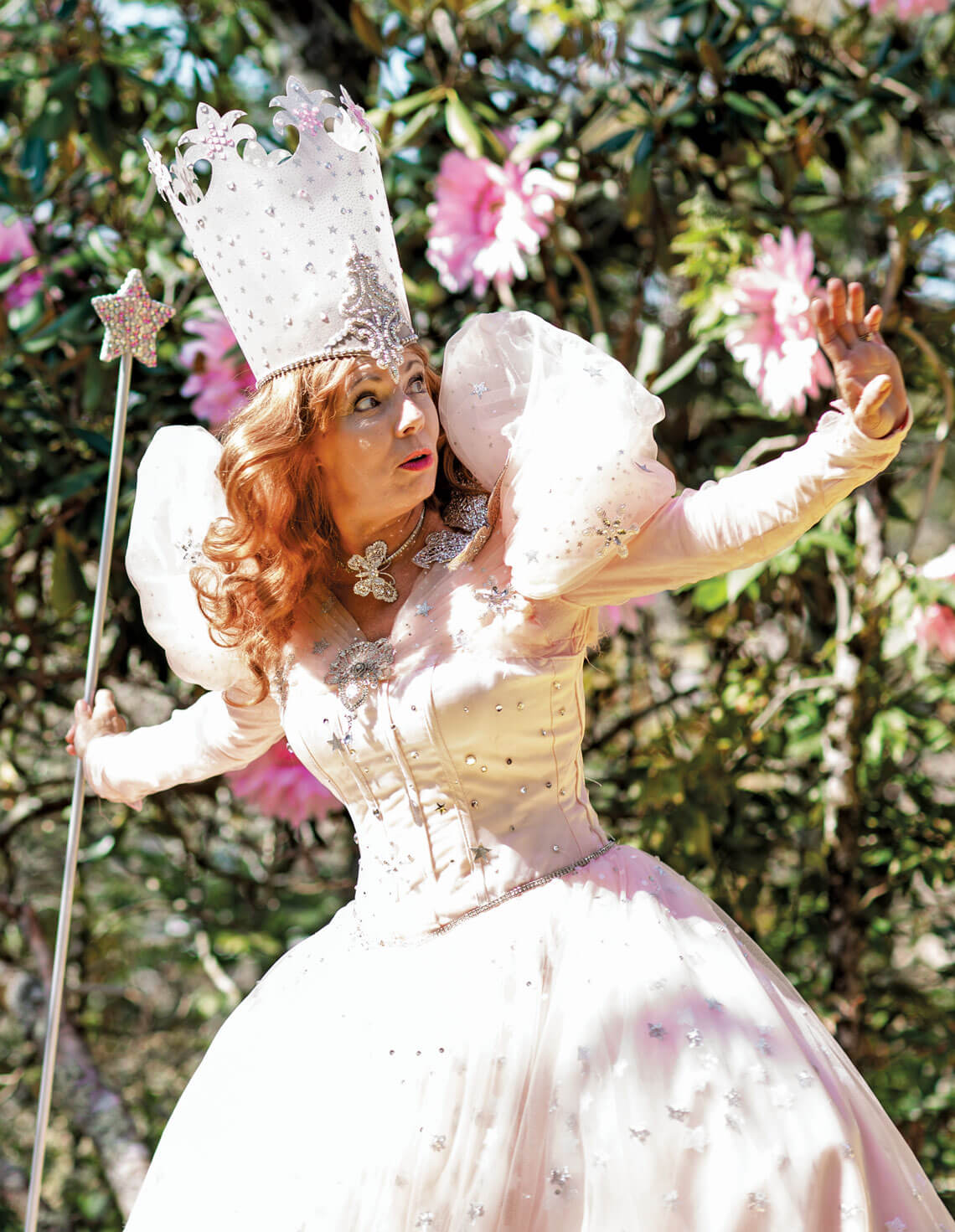 At last year’s Autumn at Oz event, Vanessa Schilling played the Wicked Witch of the West (below). Cay Harkins (above) was an original Dorothy who met her husband, a Tin Man, working at Land of Oz in the ’70s. Now, they play Glinda the Good Witch and Professor Marvel, respectively, and their daughter plays Dorothy. photographs by Revival Creatives 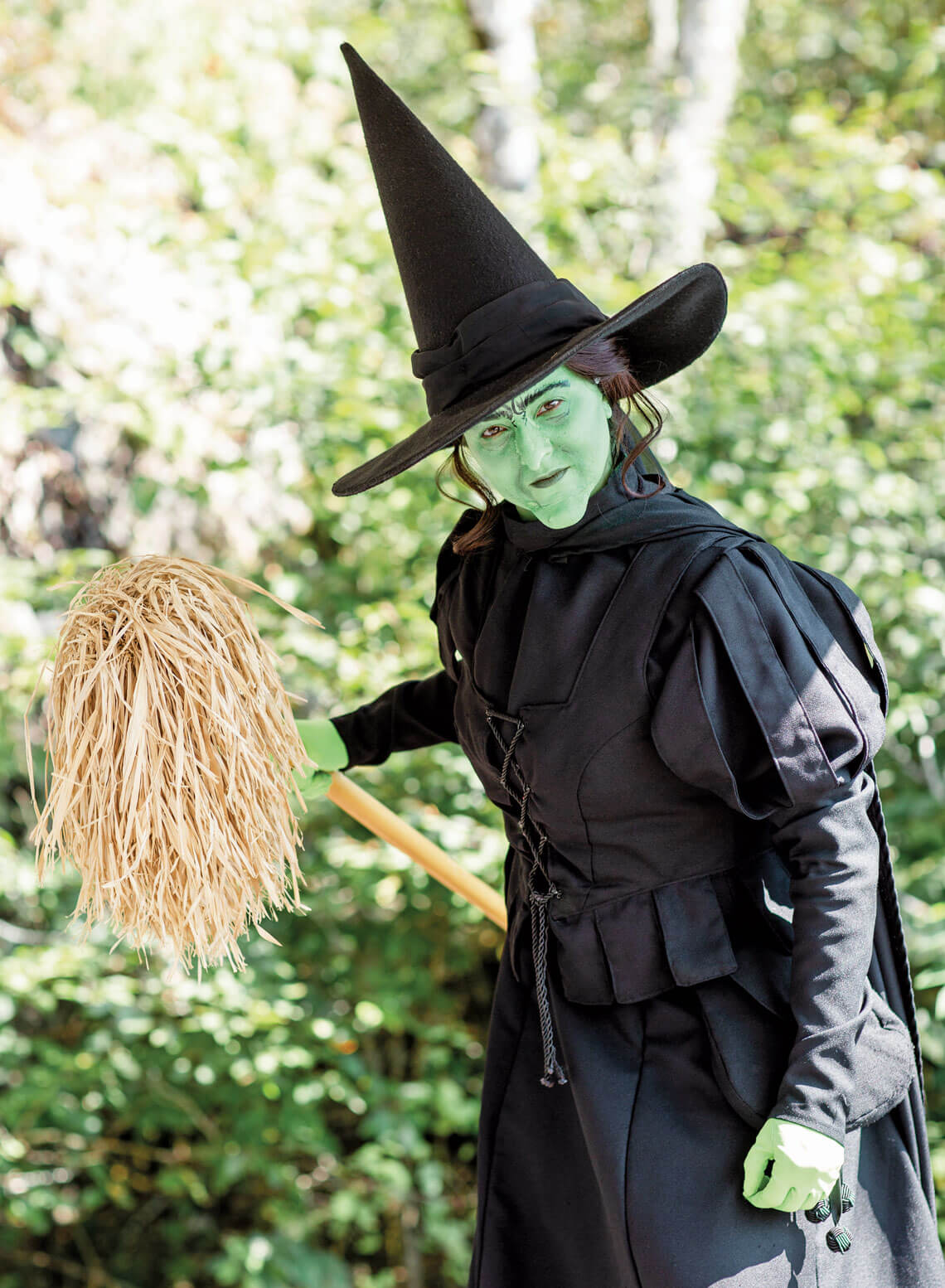 Designer Jack Pentes carefully considered each element of the park, even crawling through on his knees to see it from a child’s perspective. Along the Yellow Brick Road, he planned stops where visitors could meet the Scarecrow, the Tin Man, the Cowardly Lion, and the Wicked Witch of the West. Colorful toadstools sprouted from Munchkinland, and a chairlift ride designed to look like hot-air balloons circled the park. But real life soon intruded: In 1975, the company that owned the park went bankrupt. Later that year, vandals set fire to the Emerald City and burglarized the on-site museum that held costumes from the 1939 film The Wizard of Oz. Although the park’s new owners rebuilt, Land of Oz was never the same, and in 1980, it closed its gates.

In the decades after it closed, Land of Oz became something of a myth and a mystery. But its story wasn’t over. A reunion of the original cast members in the mid-’90s evolved into a public event called Autumn at Oz, which sells out quickly every September and continues to grow. The cast alone comprises 68 people — including six Dorothys a day, ensuring that everyone has a chance to see her skip down the Yellow Brick Road. Attendees are often overwhelmed with nostalgia, says Artistic Director Sean Barrett, who’s seen full-grown adults burst into tears. “It speaks volumes about the park,” he says, “but also about The Wizard of Oz.” 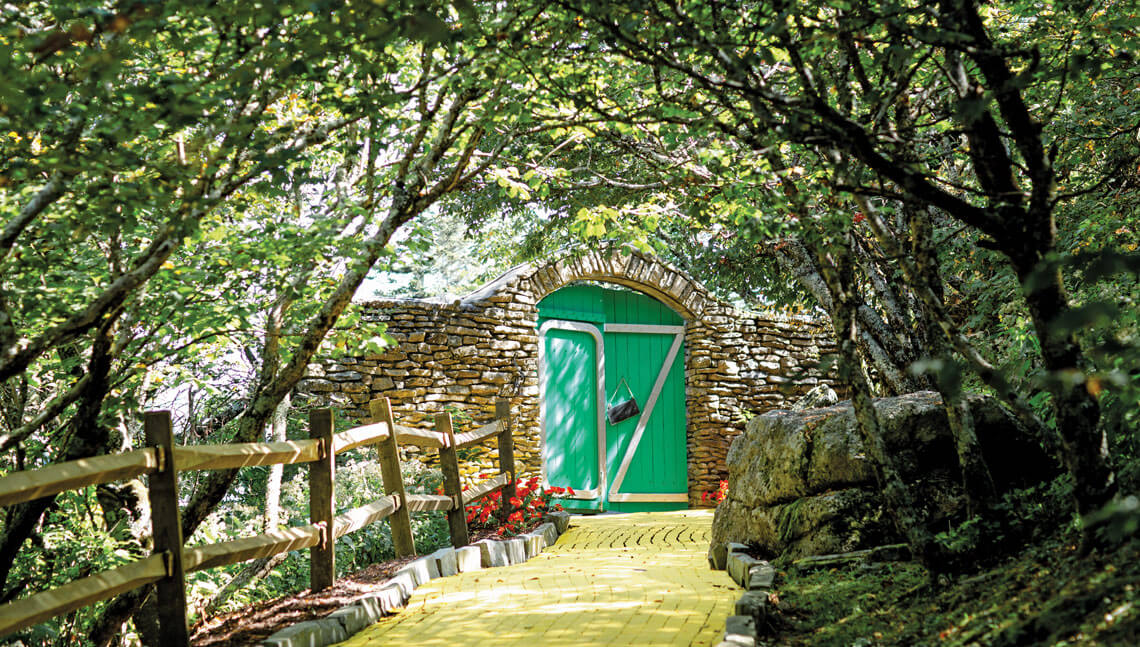 When the gatekeeper of Emerald City, played by Scott Loveless (below), pokes his head out, Wizard of Oz fans recite his line in unison with him: “Who rang that bell?” photographs by Revival Creatives 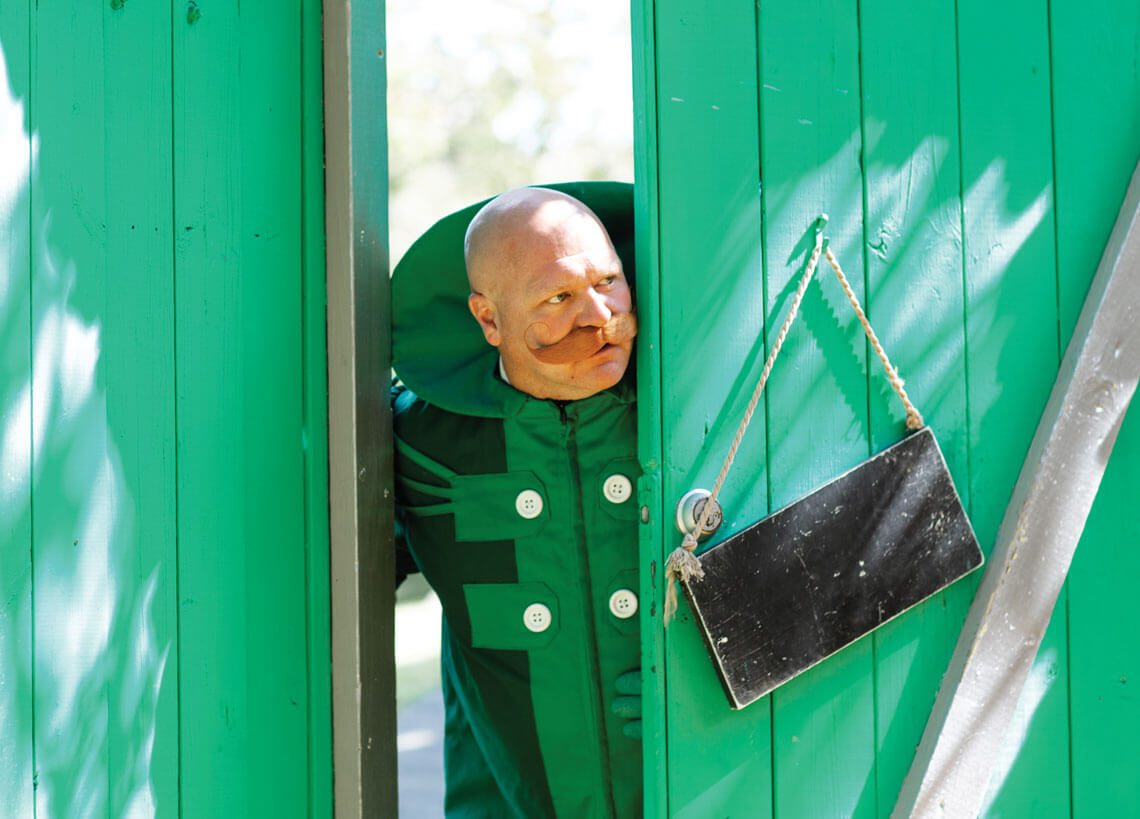 Barrett and the rest of the staff work hard to get the details just right: Every year before the park opens for private tours beginning in June, they volunteer to touch up the paint on the 44,000-brick Yellow Brick Road. Before Autumn at Oz, they fill in the cornstalks around Dorothy’s house and place 4,000 poppies along the Yellow Brick Road leading up to the Emerald City gate (above). “Everyone takes the job seriously,” Barrett says. “We feel a responsibility to keep the park going.” Many original cast members from the 1970s — then called “Ozzies” — return to the park to help out year after year, bonded by their passion for Oz. 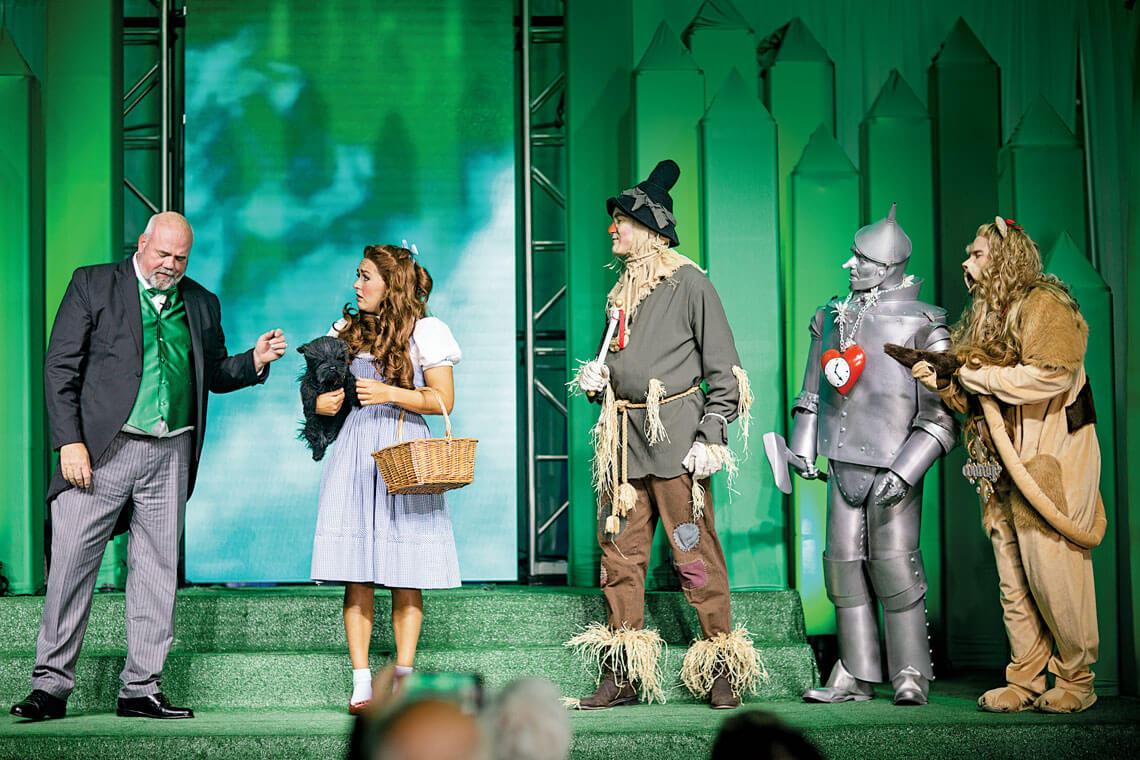 With the Magic Moment stage show in Emerald City, with music by composer Loonis McGlohon and choreography by Alice LaMar, both Charlotteans. The old Emerald City and its amphitheater are gone now, but during Autumn at Oz, the wizard (Jeff Dreyer, far left) once again gets a visit from Dorothy (Brittany Sue Hines) and her friends (left to right: Matt Ridge, John Michael Schott, and Zach Ball). Together, they discover what they had all along: smarts and courage, heart and home. photograph by Revival Creatives 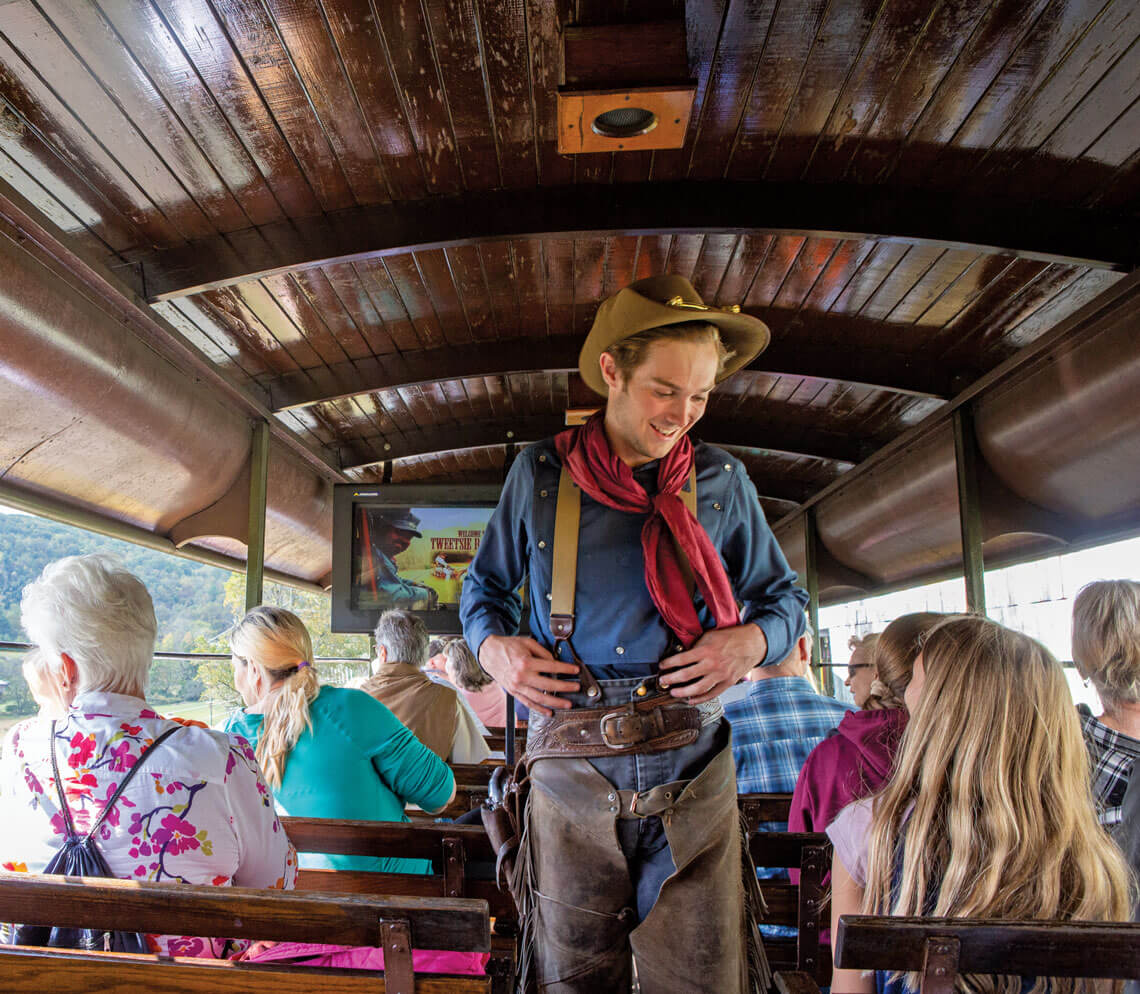 Riding the rails with cowboys like Harlowe (above) has been a rite of passage for North Carolina kids for more than half a century. Yet the Tweetsie tradition stretches back even further, to the late 19th century, when the East Tennessee & Western North Carolina Railroad (ET&WNC) cut a steep and rugged route through the Blue Ridge Mountains. Beginning in 1882, ET&WNC locomotives hauled iron ore from the mines in Cranberry, in Avery County, to Johnson City, Tennessee; by 1919, passenger service extended to Boone. The railroad was a lifeline for residents of remote western North Carolina, and it earned the nickname “Tweetsie” for the comforting trill of its steam engines’ whistle. But as roads reached many of the formerly isolated communities that had once relied on Tweetsie, cars and trucks supplanted the trains, and in 1950, the ET&WNC closed its tracks. 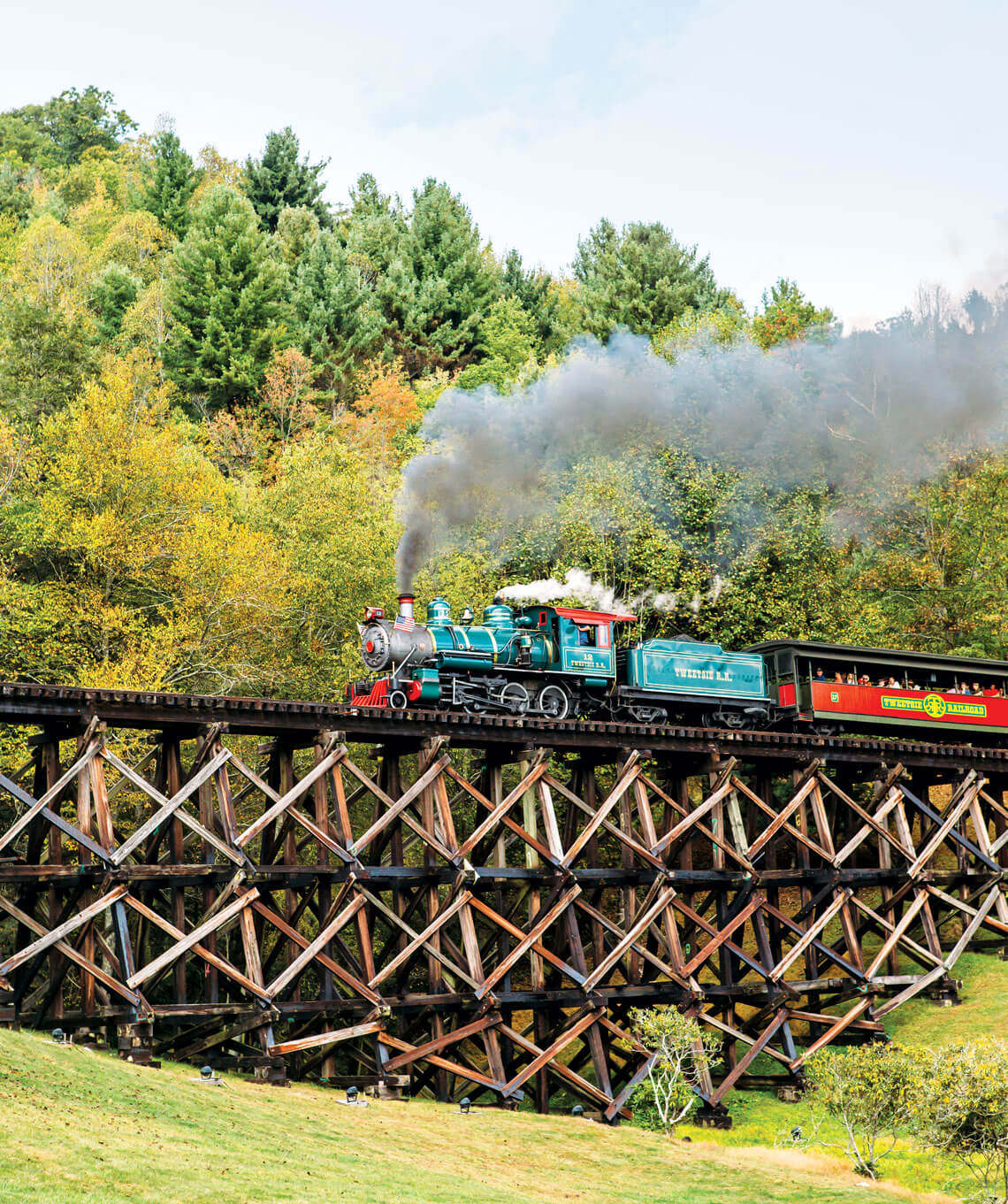 More than a century old, Engine No. 12 is the last surviving steam locomotive of the East Tennessee & Western North Carolina Railroad, which ran between Boone and Johnson City, Tennessee. photograph by Tim Robison

After the ET&WNC shuttered, its sole surviving steam engine embarked on a new journey. Engine No. 12 had a brief stint as a tourist attraction in Virginia before it was purchased by actor Gene Autry, who planned to use it in Western films. When that didn’t work out, Grover Robbins — the entrepreneur who would go on to develop Beech Mountain and open Land of Oz — saw an opportunity. He bought the rights to purchase the locomotive from Autry for $1, later brought it home to North Carolina, and began to build a theme park around it — the first in the state. 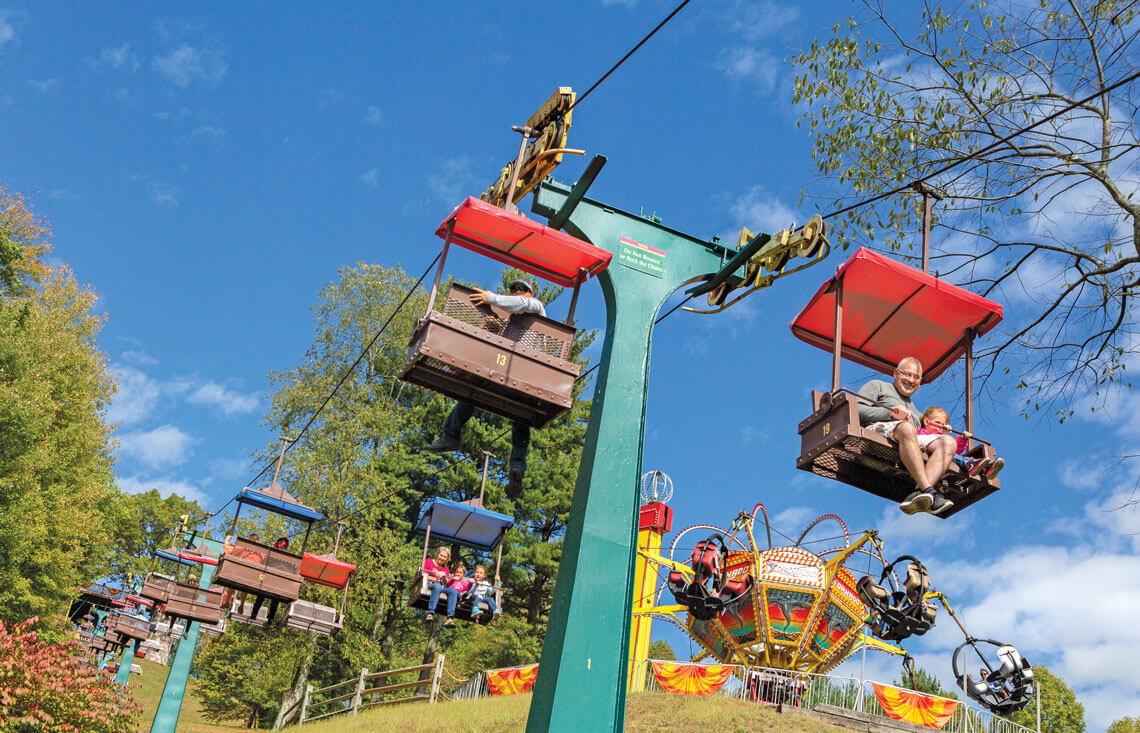 Tweetsie’s amusement rides include the chairlift to Miner’s Mountain, which offers scenic views as visitors float peacefully over the park. photograph by Tim Robison

When Tweetsie Railroad opened on July 4, 1957, its appeal was simple: Visitors rode Engine No. 12 to a picnic area a mile away, ate lunch, and rode back. Soon, the mile-long track became a three-mile loop, one train became two, and Robbins’s Wild West theme park began to take shape. Over the years, Tweetsie has grown to include live shows and amusement rides, gem mining and a petting zoo. But it still feels small and welcoming. It’s still designed for — and owned by — family. And, thanks to Robbins and his relatives, the unmistakable whistle of a train called Tweetsie still echoes across generations. 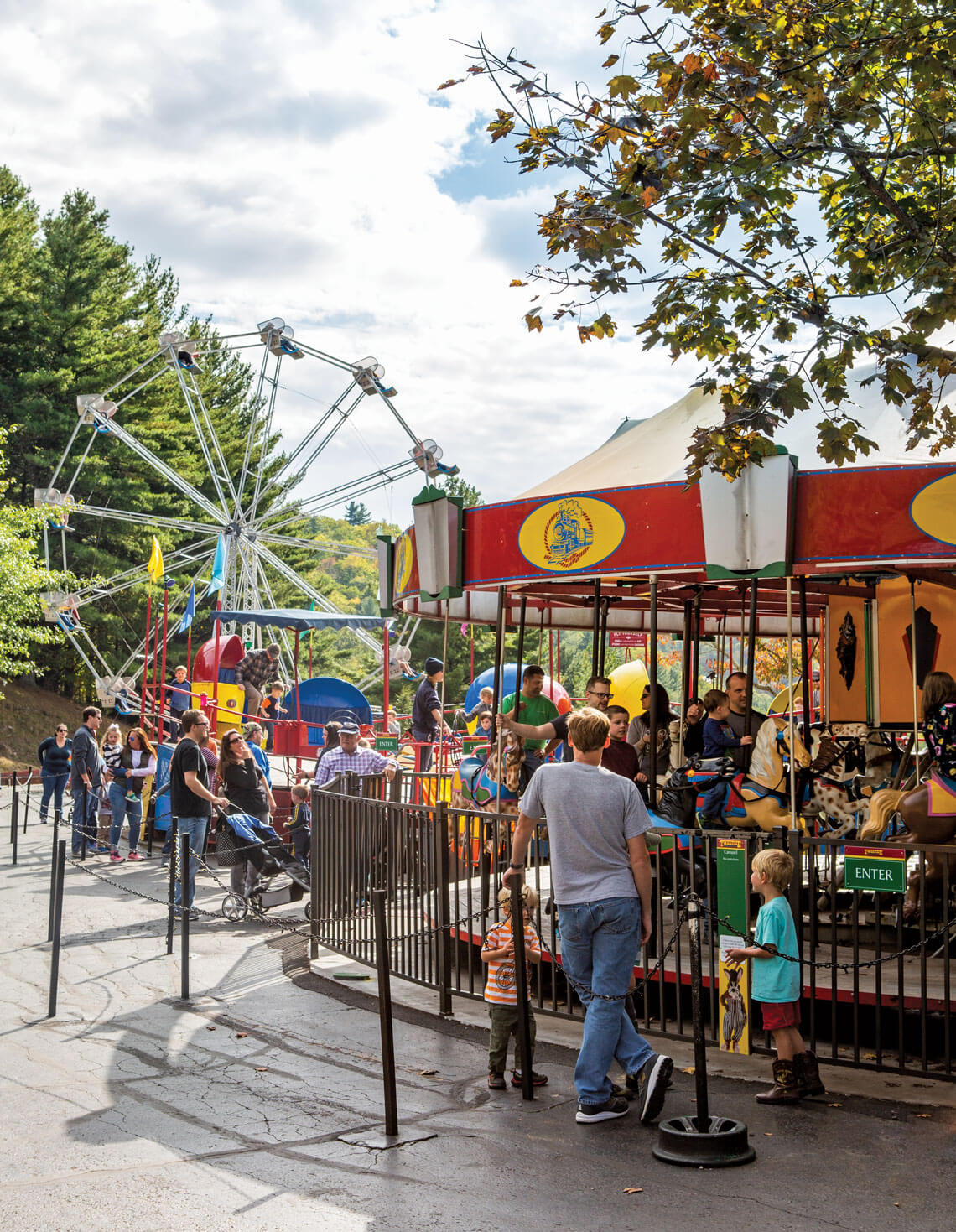 Parents who grew up visiting Tweetsie Railroad return with their own children for rides, games, and chocolate-covered cherries, served up by Tom Livingston (below) at Tweetsie’s Fudge Works. photographs by Tim Robison 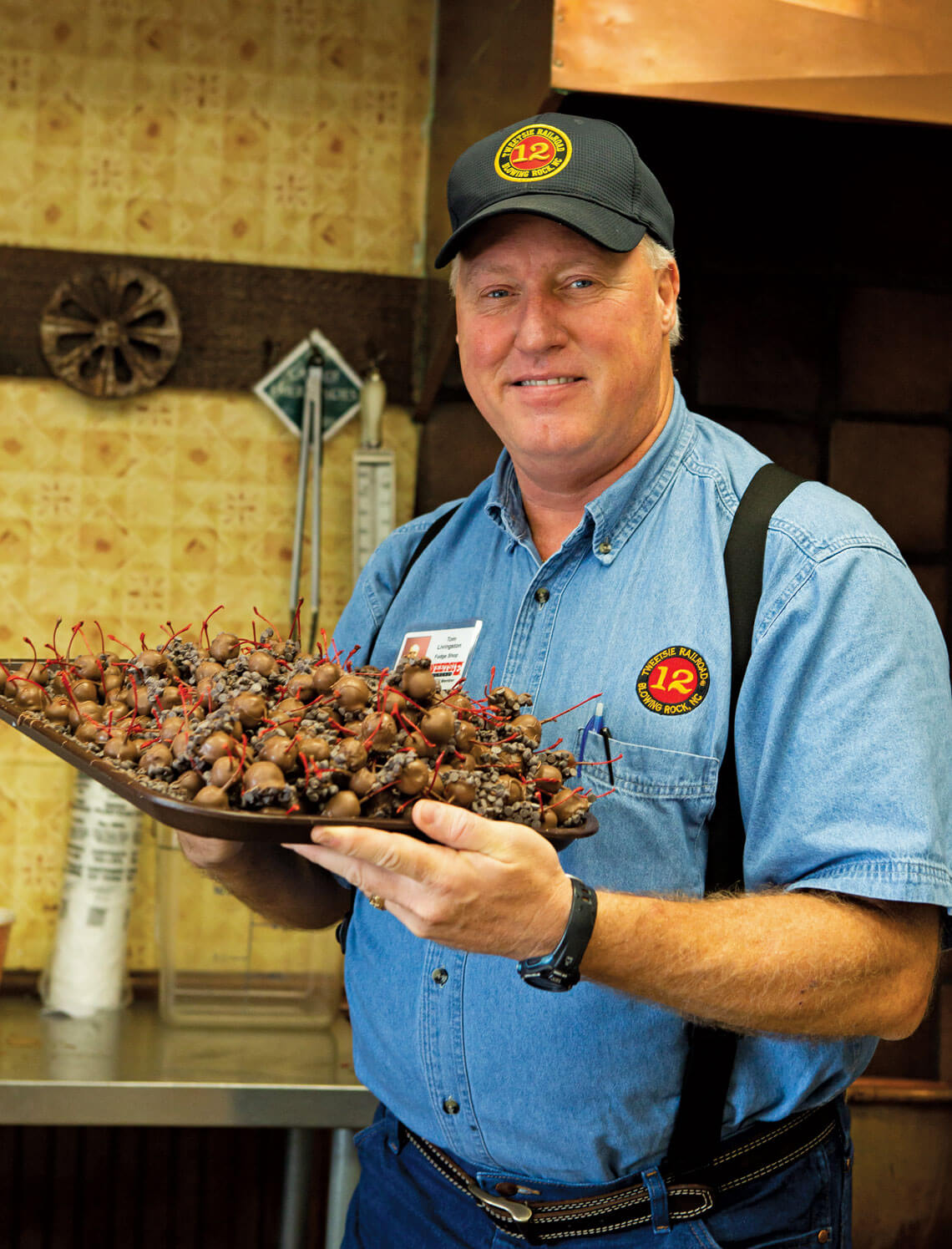