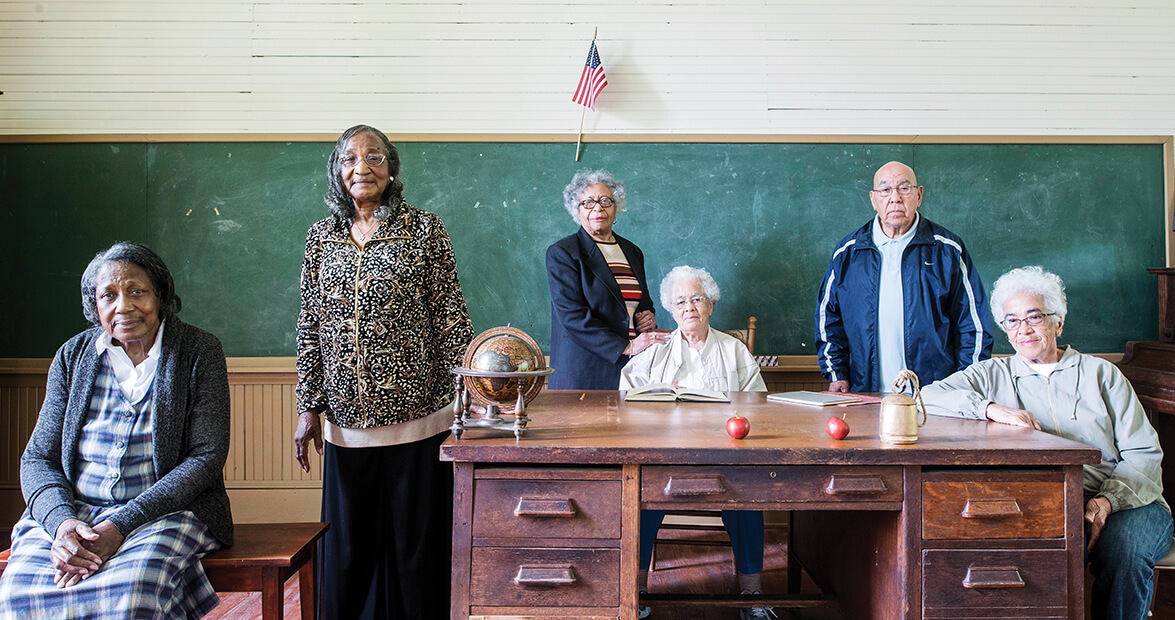 In her pressed white dress with red apples around the skirt, her hair fixed just so, and a ham biscuit wrapped for lunch, first grader Bessie Pearley was ready to march off to school for the first time. She didn’t have to go far: just through the woods to the two-room schoolhouse right next to her church. Standing on the wooden steps out front, the teacher, Miss Lillie Mae Rogers, would ring the bell in sight of her little coupe with a rumble seat parked on the dewy grass. As familiar as it all was, it was entirely new, too, and Bessie wanted no part of it.

So, shortly after the school day began, she followed the path home again. “I’d asked to go to the john house and just slipped away,” Bessie, 84, says with a clap of her hands, still relishing the escape. Soon enough her brother came to take her back to the Russell School, one of the schools for black students in segregated Durham County. After that, she says, she never wanted to leave. Now, sitting at her kitchen table, not a mile from the scene of the crime, she sighs and says, “Oh, the times we had …” 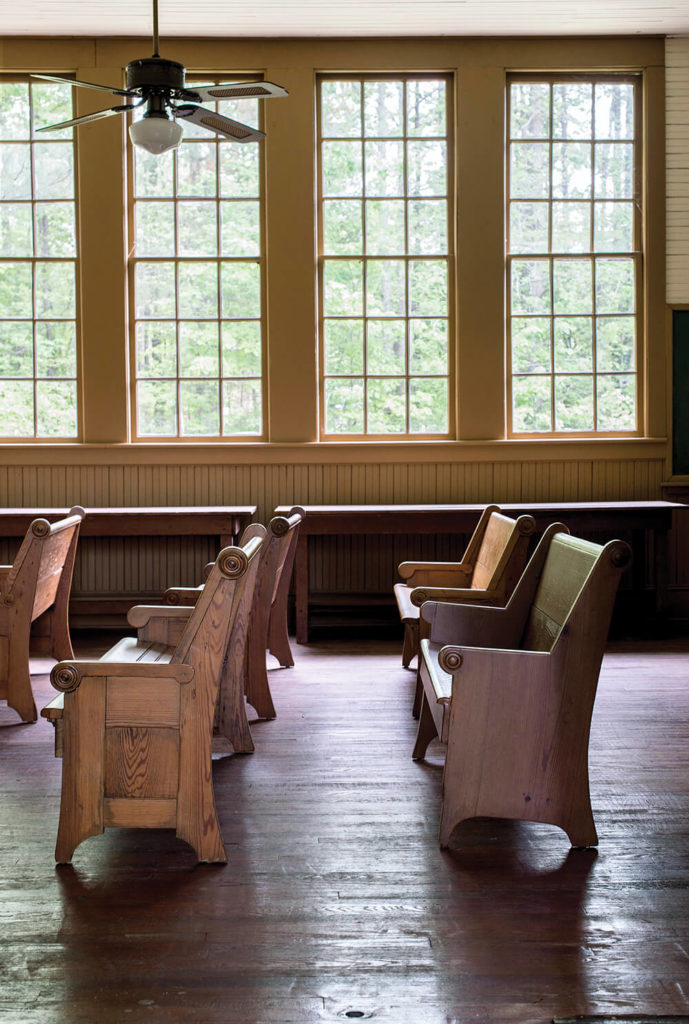 Inside the Russell School today. photograph by Lissa Gotwals

Several years before, in 1936, and an ocean away, another 6-year-old had found herself on a journey that would dovetail with Bessie’s rural schoolhouse. It all started with a simple packed suitcase, which at first seemed unremarkable to Helen Rosenwald, an only child from Bünde, Germany, who often traveled with her parents. The Rosenwald family owned a century-old cigar factory, and her father was well-respected as a volunteer fireman and a choral society member. He was also Jewish, and under Nazi rule those positions had been stripped away, some of his assets seized, and other freedoms threatened. Relatives in Berlin had sent word that it was time to get out. Too young to understand what that packed suitcase meant, Helen boarded a steamer, and left her country. Forever.

The Rosenwalds spoke no English when they arrived in New York City. The patron of the family’s escape was Julius Rosenwald, a first cousin of Helen’s grandfather, and a man who had been president of Sears, Roebuck & Company in Chicago. Good ol’ Julius. That’s what 87-year-old Helen calls him, with a knowing twinkle, as she pages through family pictures in her Durham living room. Helen never met him — he died before her family made their safe passage — but his generosity had an enduring effect. Julius and his son William organized and funded — at $1,000 per person — the relocation of 60 family members from Nazi Germany to the U.S.

A philanthropist as much as a businessman, Julius invested his wealth in causes promoting the arts and sciences, with a special interest in those benefiting Jewish and African-American communities. The Rosenwald Fund supported the work of black writers Ralph Ellison and Langston Hughes, and singer Marian Anderson, among others. As a trustee of the Tuskegee Institute, Julius developed a friendship with educator and activist Booker T. Washington. Together they embarked on an ambitious project to build small, smartly designed schools throughout the rural South, staffed with distinguished black teachers, in the hopes of righting some of the educational imbalances of segregation.

By 1932, some 5,000 Rosenwald Schools had been built in the South, and North Carolina was home to more than any other state. Generations of leaders, from the writer Maya Angelou to civil rights legend John Lewis, were shaped by them. And yet, Helen’s branch of the Rosenwald family tree knew nothing of the schools from Maryland to Texas that bore their name. “No one in the family mentioned the schools,” she says. “I don’t think my cousins knew about them.”

The extended Rosenwald family was mostly centralized in Chicago and New York; in other words, there were no Southerners in the bunch. That is, until 1955, when the girl born in a German tobacco town started her own family in an American one: Durham. 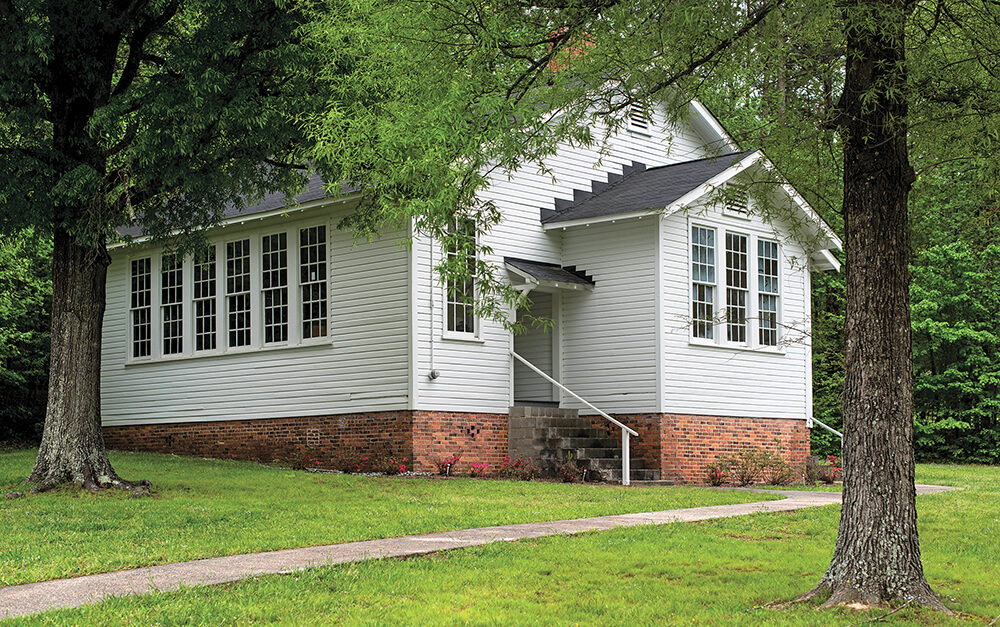 Inside the Russell School photograph by Lissa Gotwals

When Helen’s father came to visit her and her husband, Gerald Stahl, they took a drive down Gregson Street past the rows of red-brick warehouses stacked with fragrant bright leaf. “He stuck his hand out the window like this,” Helen says, scooping the air to her nose, “to smell the tobacco aroma. I guess he missed it.”

While Gerald worked as a pharmacist at Watts Hospital, 25-year-old Helen took the bus to her job at the city recreation department. “I was used to New York, where you get on the bus and the bus driver calls out, ‘Get to the back of the bus!’ That’s what you’re trained to do,” she says. “So I got on the bus in Durham and went to the back to take a seat. People were looking at me. A passenger finally said, ‘Ma’am. You’ve got to sit in the front of the bus.’ ”

It was, Helen says, her introduction to the Jim Crow South, but its instruments of oppression were all too familiar and deeply unsettling. (Her husband, too, had been a refugee from Nazi Germany.) That’s why learning about the Rosenwald Schools and their mission gave her such a profound sense of gratitude. “When I found out my family history was steeped in this, in North Carolina, I was so proud,” she says. “So proud.”

The Russell School sits on a grassy slope in the leafy, northern reaches of Durham County. It’s considered one of the best-preserved Rosenwald Schools in the country, in part because it never fell into ruin, as most did. After the doors closed in 1945, they soon reopened for the neighboring church, Cain’s Missionary Baptist, which snapped up the building for $100. Four of the five school alumni living in town, including Bessie and her sister Lillie, still attend the church, and they can recount the Christmas pageants, parties, and meetings held there in the decades that followed.

About five years ago, Helen saw an announcement in the newspaper about an event at the Russell School, one of 17 Rosenwald Schools that once operated in Durham County. Having not realized there was a schoolhouse so close by — and still in use — she called and explained her family connection. Now she’s an honorary board member, and a good friend of board chair Phyllis Mack Horton, whose grandparents attended the school.

Helen and the school’s alumni shared their stories as part of the 2015 National Rosenwald Schools Conference, which was held in Durham. The school hosted a screening of the acclaimed documentary Rosenwald, which brought much-needed, albeit fleeting, attention to the landmark.

“We have to get people to come here, to experience it, to learn from it,” Phyllis says. Half joking, she adds that she’s considering “yoga on the lawn” to get neighbors to stop by. She’s standing in the doorway of the school’s cloakroom, maybe in the very spot where her grandfather first teased her grandmother. Her volunteer work with the school is a way to keep those family memories close, along with the recollections of Bessie and the others, people she’s known her whole life. “It makes me emotional, yes,” she says. Her eyes suddenly prick with tears. “Because it’s important.”

Phyllis invites school groups to come by, ask questions, and run their curious fingers over the pocked chalkboards, which were hand-me-downs from a white school, as most of the Rosenwald School supplies were. Sometimes she brings alums like Russell Mack, who sat next to Bessie in first grade. He might tell them about spelling tests, recess, or the wild blackberries he picked at the edge of the schoolyard woods. Or how his favorite subject, current events, sparked discussions about the war. “Everyone had relations in the service back then,” says the 83-year-old. “We’d have to stand up and give a report: Who it was, where they were. I had one brother in Saipan. When I made my report, no one heard tell of Saipan,” he laughs. “We had to go to the map!”

Bessie can still picture herself in springtime on the plank seesaw, boys nearby shooting marbles. “You can be working, doing something else, and these wonderful things come across your mind,” she says, “and you remember the joy you felt.”