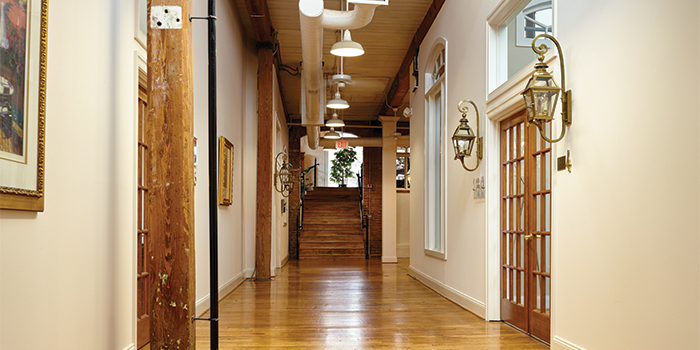 If you think industrial, antique, and ornate are three styles that can’t live in harmony, you haven’t been to Revolution Mill, where, in addition to the original heart pine floor — and hallways dressed up with wrought iron scrollwork and chandeliers — architects, hairstylists, stockbrokers, nursing students, lawyers, photographers, and 45 other firms coexist in varying square footage, from a single studio to the soaring space of a gymnasium. Must be all that sunlight that keeps everyone contented. Two, and sometimes three, horizontal lines of 38 windows, each with 42 panes, make the flat-topped redbrick mill on a slope in northeast Greensboro glorious in consistency alone.

Someone in the Cone Medical offices has rigged up a time-honored method of keeping out the sun: with an umbrella that’s open, indoors, and attached to the desk rim. An interior designer has lengthy panels of linen fastened to rings on steel dowels, and casually pulls them over to blunt the streaming sunshine, no differently than a shower curtain. Which is something never manufactured at Revolution Mill.

What was manufactured was flannel, especially in the first quarter of the 20th century; Revolution became the largest exclusive flannel producer in the world by 1930. Artificial light, in those olden days, wasn’t strong enough for task work. The vertical beams were, though, and still are. Nicked and gouged, and in locations where they aren’t enclosed by an office or embedded in a new interior wall, their numbers stretch seemingly endlessly, or at least into the 80-somethings, where this counter wore out. “When I first began working here,” admits Karen Little, assistant property manager, “I thought about getting roller skates.” She can instead partake of the fitness center open to all tenants. 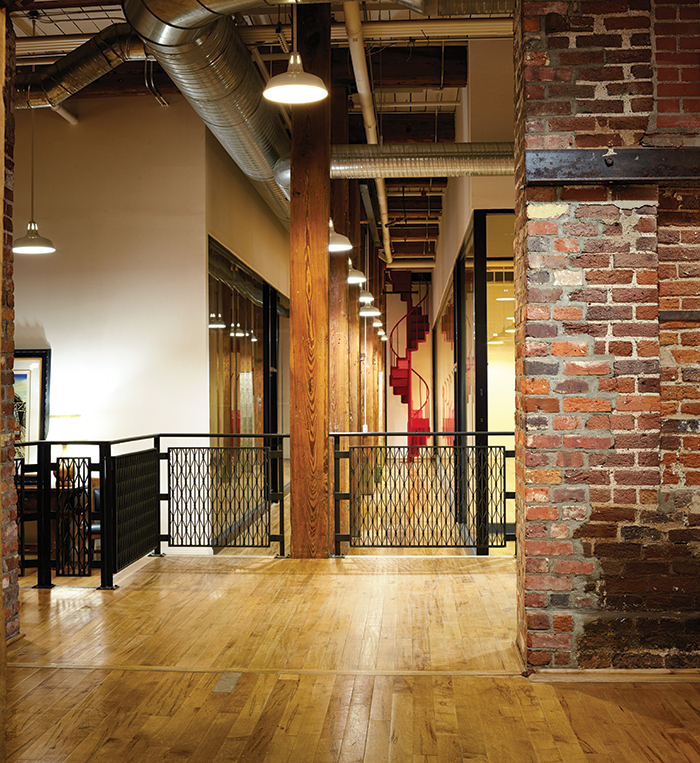 Or just wrestle the brides lined up to say “I do” on an open-air terrace with a fountain, or inside as well, at the top of a pair of curving staircases. A spacious event center overlooks both architectural features. Mills were built for utilitarian purposes, with a focus on safety and efficiency instead of aesthetics. It’s these beams, or “over-engineered timbers,” and massive brick firewalls (also referred to as “slow-burning construction” specs) that make old mills so flexible in use — and therefore attractive — today.

And Self-Help, Inc, the Durham firm undertaking the renovation of Revolution, knows it. Of the mill’s 600,000 square feet, 250,000 have been renovated. Walking up the exterior concrete stairs, aware that thousands and thousands of footsteps trod the same risers in an earlier era, or gazing down on the Dye House, where enormous machinery gathers dust, is an eerie experience. But peering into the gutted, ready-for-my-rehab interior, is a thrilling one. In the next year, 100 to 150 one- and two-bedroom units, as well as a deck and courtyard, will transform this wing of the mill.

The entire Revolution Mill complex was placed on the National Register of Historic Places in 1984. Thirty-one years later, and unlike some mill rehabs, the landscaping feels permanent, with full-growth trees and shrubs, and inviting, stone-walled entrances. Habitually, one looks for the chimneys, sprouting like branchless brick trunks from the Piedmont’s packed red clay. And there they are. Symbols of home sweet home. Office sweet office. Studio sweet studio. Side by side by side beneath beam by beam by beam. What a revolutionary concept.