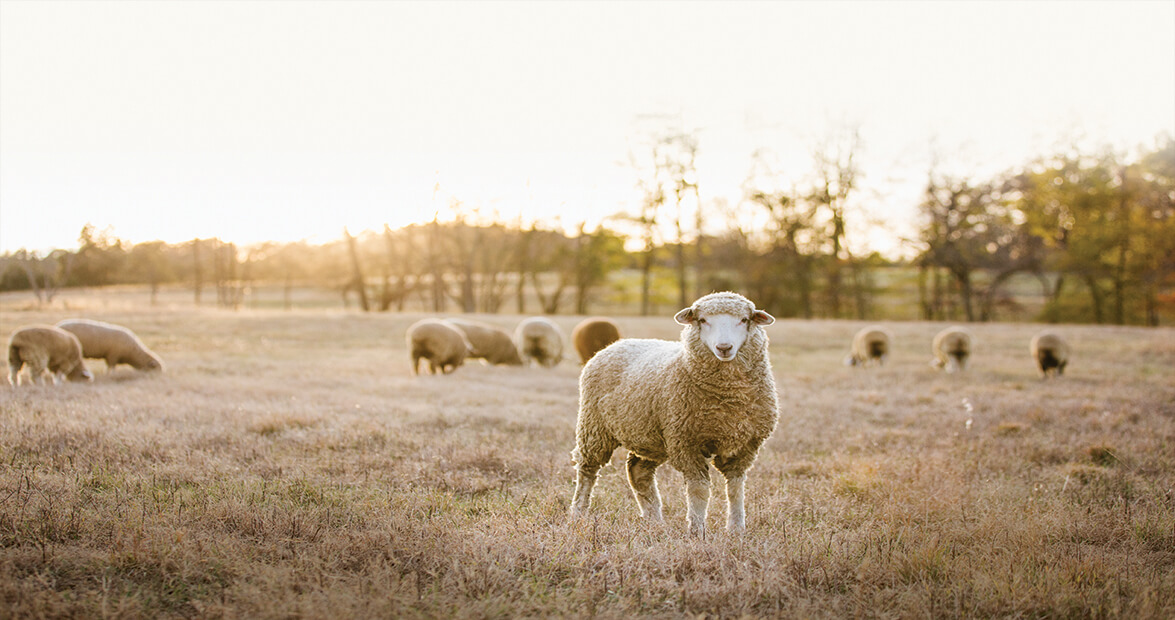 In a field across from a horse pasture, eight rams congregate in the shade, munching on fescue and waiting for their moment to sire more bundles of woolly cuteness. Newborn lambs are irresistibly cute, their fleece not exactly as white as snow, but plenty fluffy.

In another field, nearly 50 ewes dot the meadow, some with heads lowered, some lying on their bellies. A bucolic scene. Toward the end of October, the ewes and rams mix and mingle. Five months later, in the spring, the lambs wobble into the world with an ear-piercing maaaaaaaaaa. Cute, cute, cute.

But before you get all cuddly, remember this: They’re not pets. Rising Meadow Farm near Liberty is a working farm, and these lambs are here for making things, not just for eliciting awws. Many will be sheared for wool and yarn.

“It’s not a petting zoo,” says Ann Fay, who, along with her husband, Ron, bought this 128-acre farm in 1993. But even she can’t help herself when, standing in the room where she sells her hand-dyed yarn, she sees a picture of a little lamb. “A cute little guy,” she says. But they have to get big before they can provide wool for sweaters, socks, and rugs. Oh, and? — shield your ears — for meat. And my, how they grow. “These lambs grow by leaps and bounds. You can almost see them grow,” Ann says.

Ron and Ann Fay are an improbable farm couple. Both had decades-long careers in education: Ron spent more than 20 years as the headmaster of an independent school in Nashville, Tennessee, while Ann worked in school development and public relations. Originally from Vermont and the Boston area, they lived in New York, Pennsylvania, and Tennessee before deciding their lives needed a course correction. It was the early 1990s, and they were in their early 50s. “And we thought if we were ever going to do something different, we need to do it now,” Ann says.

They thought about moving to the country and starting a corporate retreat for white-collar types who needed a break from the city. Going back up north would be too cold for farming, and they wanted a change of scenery from Nashville, so they homed in on North Carolina. Their daughter Beth and her husband, Winfield, also craving a rural way of life, joined the search for land.

When they found this undulating spread of meadows and woodlands along Williams Dairy Road, they saw great potential. Never mind the overgrown cornfields and two old houses gone to seed; the place was picturesque, remote, quiet. They hired workers to refurbish the houses; one home went to Beth and Winfield, the other to Ann and Ron, who ran a bed and breakfast there for several years. They brought their dozen or so sheep and added many more to the flock — at their peak production, the Fays had more than 200 ewes for breeding. (Now approaching their late 70s, Ron and Ann have winnowed the herd to about a quarter of that number, easing the workload.)

These days, they also have four alpacas, a couple of llamas, and a flock of free-range chickens. They open their farm to the public on three occasions during the year, including Shearing Day in February, which is celebrated with a potluck lunch, Scottish fiddlers, and demonstrations by a renowned sheep shearer. The farm is open again for a day in the spring and for Farm Fest, held on the last Saturday in September. “It’s really good to get people to come to a farm and understand what happens, and look out and see animals on the pasture,” Ann says.

You can come by the farm for wool or lamb meat any time of the year, if you call ahead. Sometimes, the Fays will get calls from people who just want to show the animals to their kids. That’s fine, too. “It’s been a wonderful thing to be here,” says Ron, just in from clearing brush on his Massey Ferguson tractor. “I love working with animals.”

And working is the key word. If only lambs weren’t so darn cute.