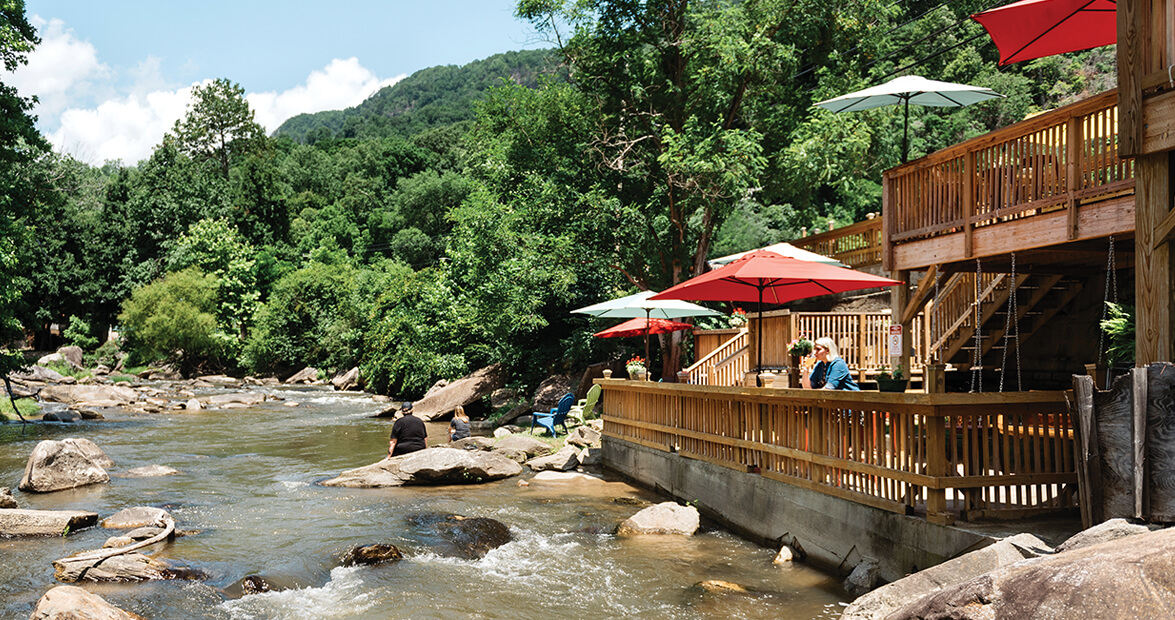 The Broad River is rushing past Hickory Nut Gorge Brewery, late afternoon sun reflecting brightly off its surface. The river is hurried here in Chimney Rock, full of boulders and bends, but the soothing rrrsh of water invites a slower pace. Until a flash of lime green breaks the reverie. Two kayakers paddle past, just feet from the deck of the brewery, giving patrons a wave before, just as quickly, they’re out of sight.

“You know, we should really get a sign,” Merri Fretwell says. “‘KAYAK PARKING HERE.’”

When Merri and her husband, Marc, opened this brewery in 2016, on the edge of the Broad and next door to Chimney Rock State Park, they wanted it to be a place for paddlers and hikers, families and lone adventurers. Merri had grown up visiting Lake Lure, and Marc, who grew up in the English countryside and learned to brew from his father, had always dreamed of turning his lifelong hobby into something more. “In rural England, the local pub is the community meeting place,” Marc says. “We want to be that here.”

And, to the Fretwells, the perfect location was worth some elbow grease: They renovated the old building, a former barbecue restaurant, almost entirely themselves. The taproom is mountain-cabin cozy, with fresh flowers on the tables and big windows that frame the Broad. You may as well be floating. “We wanted to be a place that is spiritually uplifting,” Merri says.

The beauty of the gorge inspires the beer, too — like the River Otter IPA, named after the family of fuzzy visitors who frequently play in the currents, and the Devil’s Head Red Ale, a best seller named for that other famous rock formation in the park. “When the batch comes out a little different, we name it the Devil’s Wife,” Merri says with a grin.

Marc, who favors English-style IPAs — less hoppy than their American counterparts — is also proud of Hickory Nut Gorge Brewery’s special English tap: Traditional British-style beers are hand-pumped from a metal cask, kept at cellar temperature, and carbonated naturally by yeast, rather than by added carbon dioxide like most kegged beers.

But, as with most things in the area, the real draw is outside. Four decks lead guests down to the water — and provide stunning views: Look up to see the town’s namesake on the mountain, or spot Hickory Nut Falls cascading into the forest. Or just slip into a riverside Adirondack chair, kick back, and watch the kayakers. “Sometimes, when you walk in, you’re like, ‘Wow, there’s nobody here.’ And then you walk out on the deck,” says taproom manager Scout McCormick. “Everyone wants to be on the river.”