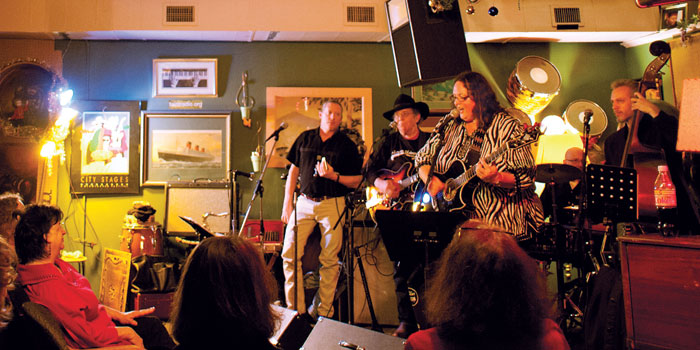 In 1960, in a Raleigh junior high school, Rodney Marsh’s friend dragged him along on a trip to the band room. The instructor handed Marsh a flute headpiece and said, “Blow over this like you’re blowing over a Coke bottle.” A noise came out.
Marsh’s life suddenly had a focus.

“Everyone has their moment when something completely changes your life forever,” Marsh says.

All the way through school, “everything bent towards the band room.” He played flute through college. He’s since played with Carolina legends like Gregg Gelb and well-known acts like the Hard Times Jazz Band. He’s considered something of a master at both flute and sax.

Marsh talks about hearing Duke Ellington or Buddy Rich or Sonny Stitt, about Stan Getz hanging around in the kitchen of The Frog & Nightgown, where Marsh cooked and brought his flute to work and stepped on stage. He talks about getting pocket change from his idol, jazz flutist Herbie Mann, and keeping it for 30 years.

Marsh isn’t comfortable performing. He likes to improvise rather than read notes. “I always felt like I was faking,” he says, peering through horn-rimmed glasses beneath his signature black beret that tamps down his shock of gray hair.

Beginning in the mid-1970s, instead of steady performance, Marsh made his musical contribution by fixing musical instruments in his house. That business led him through a series of Raleigh storefronts and, eventually, to the 7,200-square-foot, two-story building in downtown Raleigh. Before Marsh’s business moved in, the building was a bridal shop. The upstairs held fitting rooms, but now that space is a performance room unlike any other, a space called Marsh Woodwinds Upstairs.

Since he moved into the building, Marsh has devised ways to help others relax on stage.

He uses unusual methods to help performers and attendees find comfort. He offers snacks. He collects so many items from yard sales and antiques shops, you feel like you’re in your grandmother’s parlor rather than a performance space. Drums hang on the walls, as do old movie posters and framed pictures of musical instruments and ships. A bigger-than-life-size sculpture of a panther stalks the stage behind the performer’s seats.

When Marsh decided to use the second floor for performances, a friend explained that acoustics would be a problem: “He said I’d have to tune the room.” But Marsh never did. Instead, his collection helped the room tune itself. Oriental carpets cover the floor. A hand-sewn tapestry of a nighttime cityscape covers one wall. Opposite, atop what Marsh calls an outrigger, from which wedding gowns used to hang, lolls a seven-foot, plush alligator.

“Places like this evolve,” Marsh says. “You just nail some picture up, and then you nail another one up. You decorate for Christmas, and you never take it down.”

One night during a performance, the room glows in pools of golden lamp light. Rows of comfortably padded chairs march backward from the low stage — room for 80, give or take. A woman with long, dark hair plays guitar; next to her, a man in jeans accompanies on another guitar. The carpets, the wall hangings, and the padded seats all seem to absorb echo and discord, making the room sound like it feels — intimate, warm, and peaceful. Marsh sits in the back, running the soundboard, smiling, sipping a glass of wine.

The performers break, and the audience flows into the alcove full of free snacks. Admission into Upstairs includes those snacks, which Marsh buys, in a hodgepodge of snack trays and containers. The snacks he provides run from veggies and dip to chips and Reese’s Pieces. They just make Marsh Woodwinds Upstairs feel more like home. Marsh’s time as a cook planted the idea in his mind that food and drink make for a happy audience. During intermission, people mingle like they’re at a party.

“I’ve never had a bad experience here,” playing or listening, says Matt Douglas, the guitarist who performed alongside singer Caroline Mamoulides. “It’s a real listening room. It’s got such a great energy.”

“Yeah,” Mamoulides says. “And Rodney is the best host.”

Marsh Woodwinds Upstairs is a performance space designed by a man who isn’t quite comfortable performing — a place where performing music can never be uncomfortable.

Scott Huler’s articles appear in The New York Times, The Washington Post, The Philadelphia Inquirer, The Los Angeles Times, and Backpacker and Fortune magazines. He has written several books, including his most recent, On the Grid: A Plot of Land, an Average Neighborhood and the Systems that Make Our World Work. He served as the 2011 Piedmont Laureate and lives in Raleigh with his wife and two children. Scott’s most recent story for Our State was “The Natural Lake” (January 2012).