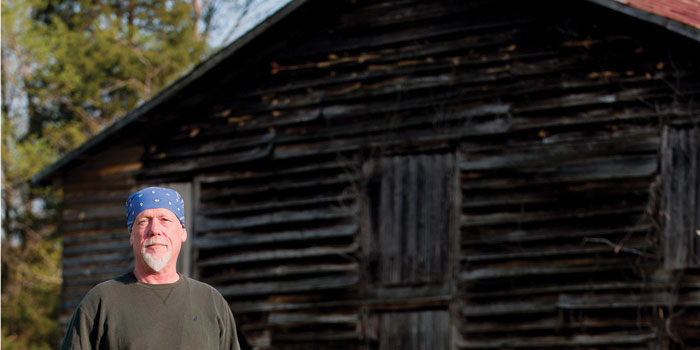 Roger Dinger finds the forgotten South in the corners of central North Carolina. He climbs into his Ford pickup, and with his hammer, crowbar, and a pair of gloves beside him, he travels the back roads 100 miles from his Chatham County workshop to places named Glendon, Crutchfield Crossing, and Seminole.

Sometimes, he strikes out on his own. But most of the time, he gets a call from somebody who’s heard about him, and they’ll tell him about a barn, a corncrib, or a cure house that needs to come down.

That’s when Dinger starts to work. He’ll take pictures, crawl under the structure, and stand inside and think. For him, it’s a spiritual, visceral experience not unlike visiting a family member in the twilight of life.

He hears about the history that bloomed in this corner of North Carolina, and his mind takes off and envisions the life of a barn: the acorn growing into a sapling, the sapling growing into a tree, the tree turning into a part of a barn, and a barn becoming an indelible part of a working-class farm family.

Many times, the barn disappears and becomes, maybe, a subdivision. But Dinger hates that. He gets permission to dismantle the barn, throw the wood into the bed of his F-150, and take it back to his workshop beside the Rocky River.

There, Dinger creates. He takes the wood and turns it into picture frames, birdhouses, shoe shelves, corner cabinets, bookcases, beds, and tables 8 to 10 feet long. He always takes the first thing he builds back to the barn’s owner, to express his gratitude.

Dinger uses most everything he reclaims, including old hinges and latches. Basically, he gives new life to old buildings. He has a name for it: reinbarnation.

“That word tells the whole story,” says Dinger, who turned 58 in March. “It’s reincarnation. It’s transformation. It’s giving new life to something that has passed on.”

A hunger for history

Dinger walks through his workshop, past his array of sanders and saws, to a workbench. He slips on his green gloves and begins to rub boiled linseed oil along a piece of gum, sanded white, as smooth as marble.

After a few sweeps, the gum turns all shades of brown. As the color deepens, the grain pops, like veins in a muscled forearm, and the blemishes in the wood become as pronounced as dimples in a cheek. The blemishes come from insects, deer, cows, kids, hammers, you name it.

“You don’t truly know what it’s going to look like,” he says. “I see the different grains, the nail holes. But when I lay the multiple boards side by side, it sort of says to me, ‘Oh yeah, this’ll look good.’”

Dinger never took a carpentry class. He worked with wood only when he helped his father refinish their basement. Yet Dinger always saw himself as a naturalist with a big imagination and a hunger for history.

He was like Huck Finn — except without the Mississippi River. Dinger had the South River.

He grew up in Waynesboro, Virginia, a small town in the Shenandoah Valley where the Blue Ridge Parkway and Skyline Drive meet. He wandered the fields, hiked through the woods, and stopped when he and his buddies found an abandoned barn where they could play Civil War. Always, his dog, Fred, a black-and-tan hound, was by his side.

Dinger came out of the University of Virginia with an undergraduate degree in religious studies and ended up as a kayak and rock-climbing instructor with an outdoor equipment company and later a wilderness school in north Georgia before becoming a land surveyor in Greensboro. He crunched numbers, drew maps, and supervised survey crews. And wherever he went, he saw the structures of the forgotten South give way to the new South.

In 1992, Dinger spotted this old barn in Summerfield. It was all oak, with 14-inch-wide boards, weathered silver. He asked the owner if he could salvage the wood, and the owner obliged. Dinger turned that barn into an entertainment center, a bookcase, a coffee table, picture frames, and paneling for his den.

Soon, on every work site, he looked for barns, sheds, anything that would take his mind off his old world of number crunching and move him into his new world of wood.

In 2003, he and his wife, Katja Sage, left Greensboro and found nearly six acres beside the Rocky River in eastern Chatham County, between Pittsboro and Bear Creek, where the only sounds are the birds singing and the whispers of a slow-moving stream.

To showcase his work, Dinger built a workshop and a gallery. He continued his survey work. But by 2007, after nearly a quarter-century as a land surveyor, he quit to build furniture full-time.

Dinger was nervous. Making money in the mercurial world of art is no sure thing. But he believed in his art and his idea of “reinbarnation.’’ He took small-business classes through Central Carolina Community College; discovered a community of artists through the North Carolina Arts Incubator in Siler City; and got a few breaks, such as getting Best of Show at the Festival for the Eno in Durham in 2007.

Word spread. Clients came. And Dinger’s confidence grew. “I didn’t know what I was doing,” he says. “But I had a vision, and I believed in it, and it allowed me the time to build things I saw in my mind.

“Five years ago, I never would have had the confidence to build a corner cabinet, but now I do,” he says. “I just feel very connected to the beauty of the wood. To me, it’s almost alive. It looks like muscle tissue. It’s just my sense of aesthetics. I enjoy being in old places. I enjoy being around old things. It’s just beautiful.”

In his workshop, after several cups of coffee, Dinger spends hours by himself. He stays there for days, from midmorning until after the sun sets. He listens to classical music and turns the found wood into pieces of furniture he first saw in his mind.

He sees it in dreams. Then he sketches it out, and after days and weeks of work, he has something useful, utilitarian, and beautiful.

He has a phrase for what he does: recycling history.

“I go into a space where I’m very present with what I’m doing, and I rarely think about anything else,” Dinger says. “It’s pleasant. It’s just this free flow of thoughts that opens doors when I’m working, and it’s just interesting to see how things evolve and change.”

Dinger’s wife notices how those things evolve and change. As they sit on the back porch or at the kitchen table, she’ll see a spark in his blue eyes. She has a name for it: the look.

These days, she sees the look often. They walk along the 2,000 feet of trails they created along the Rocky River or lounge around with their three cats, Voodoo, Zulie, and Alvysar, and Dinger talks art.

He tells her about listening to the wood; of knowing its history; and how it helps him saw and sand, hammer and shape.

Soon, Sage sees it — a planter, a table, a headboard, a desk. And she realizes one thing: Her husband, the craftsman with a poet’s heart, knows how to listen to his artist within.

“This has really fulfilled a deep well of creativity that has let him step into his artistic self,” Sage says. “I think he’s become more fully himself. He gets up in the morning, and he can’t wait to get out and work on the idea that he dreamed about the night before. He looks forward to his time with the wood.”

Every structure Dinger finds in the forgotten South has a story. He talks about one, for instance, that was an old cure house built during the Civil War in Glendon, a community in northern Moore County beside the railroad tracks between Siler City and Carthage. David and Nancy Pierceall, husband and wife, live there.

David restored the cure house into a playhouse for his grandson and his great-nieces and great-nephews. But Hurricane Fran toppled a 200-year-old oak that crushed the playhouse.

The Piercealls’ daughter, Beth Coode, contacted Dinger about using the wood to build a gift for her parents. He turned their playhouse of heart pine into two end tables.

“It’s like recycling,” Nancy Pierceall says. “You hate to see things go to waste, and you know things you think were beautiful — and they are — but they’re also a part of your family.”

The gallery is open by appointment only. Please call or email to arrange a visit.

Jeri Rowe, a Greensboro resident, is a staff columnist with the News & Record.