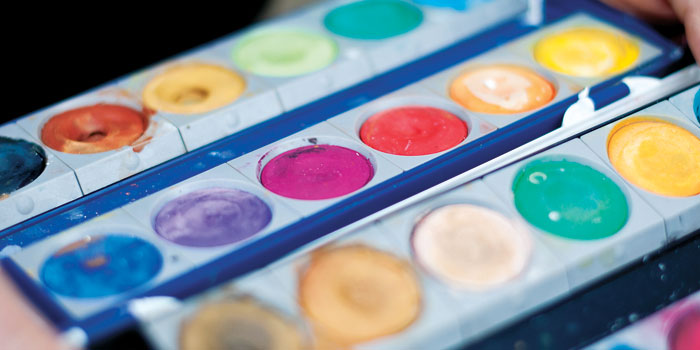 The only light the boy had was the glow of the fireplace. Lying next to the burning logs at night, 4-year-old Ronald Ragland taught himself how to draw. It was during World War II, and Ragland and his brother competed to see who could draw the best tanks and planes and cartoon characters from the daily newspaper.

The Ragland boys grew up on a farm in Oxford. Their dad, Hugh, planted a hundred acres in tobacco, and the self-sufficient Raglands grew their own food. Hugh watched their money, and Ragland refers to the pencils he and his brother used for drawing as toys.

Those toys became Ragland’s tools. The precocious farm boy built a successful career as a commercial artist. Since retiring in 1997, he has returned to the world of his youth. He is a memory painter, drawing on recollections of his rural North Carolina farm life for inspiration.

People all over the country embrace his work. He sells prints of his paintings through a website, beagleart.com; magazine ads; and postcard mailings. Over the years, he received orders from every state except Alaska and Hawaii; he even shipped prints to Japan and Russia.

He refers to his subject matter as “my growing-up time” and professes nostalgia for those simpler days. “It was a good life,” he says.

He’s released nine prints to date, all of them painted with opaque watercolors.

“A lot of my paintings work on people’s emotions,” Ragland says. “I’ve had women call me up crying because a picture brought back childhood memories of their father and family and where they grew up.”

Several of his more lighthearted pieces show beagles tracking or chasing rabbits. In fact, beagles inspired what he does now. In 1995, he painted the cover of a catalog for Happy Jack dog products. Soon, he marketed it as a print. To this day, a beagle is somewhere in all of his paintings, even ones that don’t focus on the dogs.

“When I grew up, every tobacco farmer had beagles,” he explains. “When they finished all the hard work in the fall and winter came in, they’d go out with their dogs and hunt rabbits.”

Ragland lounges in a chair in his den. Above the chair hangs a self-portrait: A teenage Ragland wrangles with an antsy mule as a storm blows up in the distance.

“This mule had been struck by lightning, and every time he felt a rumble of a storm coming up, he took off for the house whether I wanted to or not,” Ragland says, chuckling at the recollection.

Ragland always knew he would make his living as an artist. After high school, he enrolled at the Ringling School of Art (now the Ringling College of Art and Design), in Sarasota, Florida. Upon graduating, he took a job in Raleigh with a studio that supplied art to advertising agencies.

The United States Army drafted him in 1959, but his artistic ability got him out of grunt work. After he completed basic training, the Army assigned him to a drawing board and gave him a private office at Fort Knox, Kentucky. His painting of an M-60 tank was ceremoniously presented to a major general and hung in the Pentagon.

After his discharge, he spent the next 35 years working for ad firms, including a successful Raleigh-based agency he cofounded with John Percivall.

As a commercial artist, he was a nose-to-the-grindstone kind of guy. “I never missed a deadline in 42 years,” he says. “Shows how hardheaded I am.”

Ragland craved variety, mastering an array of techniques, subjects, and media. He designed everything from cigarette packs to bank billboards. He often found himself illustrating farm scenes for agricultural accounts, which reconnected him to his rural roots.

Ragland quit the business when computer-designed art overtook manual work. “I didn’t want to get involved with that,” he says. “Mechanical things bore me.”

Ragland and Betty, his wife of 55 years, live in a modest brick home in north Raleigh. He paints in a basement studio, a tidy room with a drafting table and an array of watercolors neatly lined up. He’s partial to the German-made Pelican brand. He puts about 100 hours into each painting. He spends even more time figuring out its composition.

“Knowing what you’re going to paint, that’s the problem,” Ragland says. “It’s thinking about what’s next: what tree, what this, what that.”

While he paints, he tunes his radio to a station playing traditional country or old rock and roll. Ragland was a fan when rock ’n’roll hit in the 1950s, and he’s still enamored by the music and its creators. Signed photos from Jerry Lee Lewis, Fats Domino, and Brenda Lee line a wall in his home.

He leads a life filled with interesting pursuits and few idle moments. He’s lifted weights most of his life and still pumps iron with a few friends from Oxford. “We’re all 76,” he says. “We’re not supposed to be doing stuff like that.”

He once restored a 1957 Chevrolet Bel Air with his three children, and the car now sits in his driveway. It won nine trophies at car shows.

Even in retirement, the work ethic that harks back to the childhood scenes Ragland captures faithfully in his paintings still drives him.

One of Ragland’s most popular prints, Old Country Pride, shows his father atop a plow pulled by draft mules. The vivid hues and crisp, clean lines evoke old-time farm life with photographic clarity.

Ragland was inspired to paint Hot Pursuit after visiting family in Wendell. Ragland, curious to know what his cousin’s dogs looked like while running, observed the beagles for hours, and he later brought the scene to life in this print.

Memories is set in a field of shoulder-high tobacco where Hugh Ragland, Ronald’s father, and his African-American farmhand, Albert Downey, stoically harvest the crop. It’s a classic scene with recognizable archetypes.

Parke Puterbaugh is a Greensboro-based writer who teaches at Guilford College. He is a former senior editor at Rolling Stone magazine and the author or coauthor of 10 books, including his most recent, Phish: the Biography. His last story for Our State was “Literary Harmony” (December 2011).