We change from short sleeves to hoodies and back again several times over, just at lunch — but that’s what comes with open-air dining at 5,000 feet. Let’s stay here a moment, between hikes, before anybody checks in anywhere, and just savor the view. Let’s look at Hogback Mountain, at Funnel Top, at Looking Glass Rock, at Buckwheat Knob. I count nine rows of mountains. My boys can’t believe that we’re looking down at clouds. There are dogs everywhere, and people eating in pairs and groups, and everybody’s facing south, drinking in the 30 or 50 or 100 miles you can see from up here. 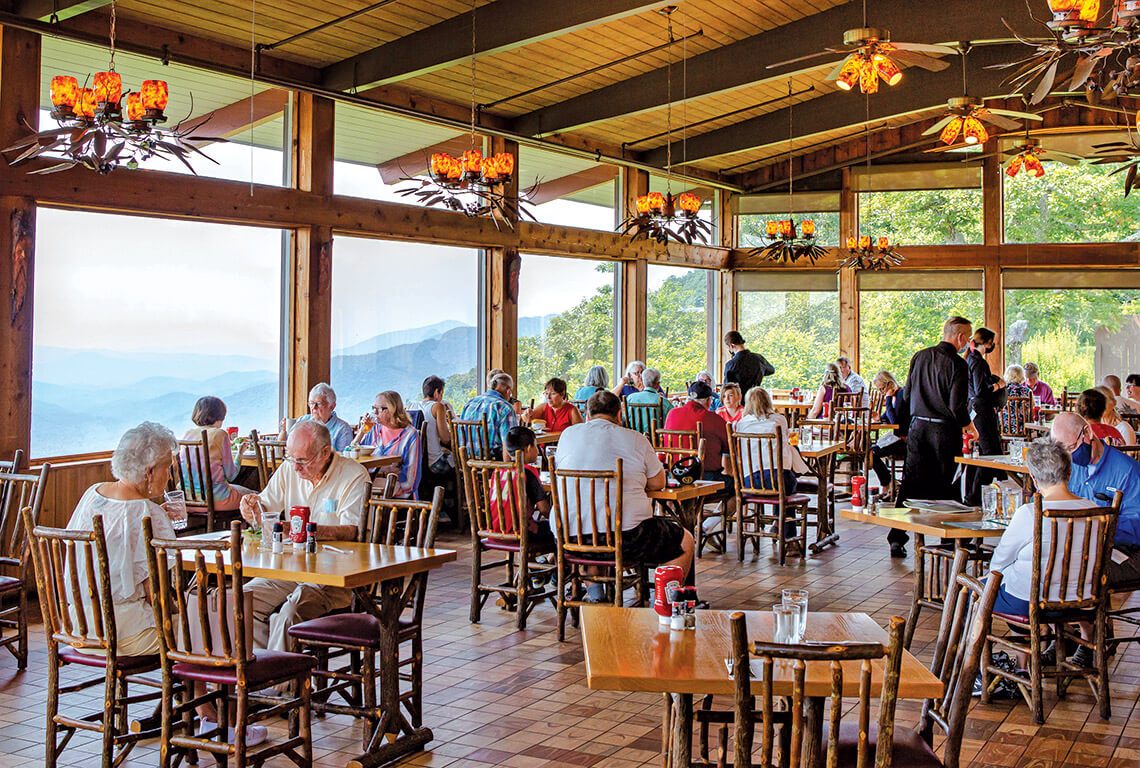 Guests can enjoy panoramic views through the restaurant’s walls of windows while they eat. photograph by Tim Robison

It’s hard to describe, exactly, what the Pisgah Inn is: some cross between fine dining and a picnic, a hotel and a motel, spartan and homey — but mostly, it’s these four unassuming board-and-batten buildings perched on the side of the top of a mountain, and the view runs on forever, and the food is good, and the drinks are cold, and if you’re not fond of the weather, all you need to do is wait half an hour. The prevailing sense isn’t even any of that, though. It’s really that you’d just like to sit in these Adirondack rockers either for the rest of the afternoon or for the rest of the season, and not give much consideration to anything else at all.

Bruce O’Connell has been giving every bit of consideration to every inch of this place since his family came on board in 1979, in another strange kind of cross: as investors, and also hotel managers. “Dad was maintenance, Mom was accounting and front desk, and I was the food guy,” he says. “I was 24. When I first got here, I had no intention of staying or liking it.” He’d been through hotel school at Cornell and was working in Baltimore, “and I got dragged out of the big city and down into the sticks.”

But the place grew on him. “Every time I came back,” he tells me (the Pisgah Inn is seasonal, open April through October), “I was fonder and fonder.” To hear him talk about the inn now is to hear him talk about the place as though it were his child: “I’ve watched the inn grow up.” He’s seen just about everything: a five-foot snowfall in May of 1992, various fires, the roof blown off. When I stop him to ask when that was, he says, “Which time?” 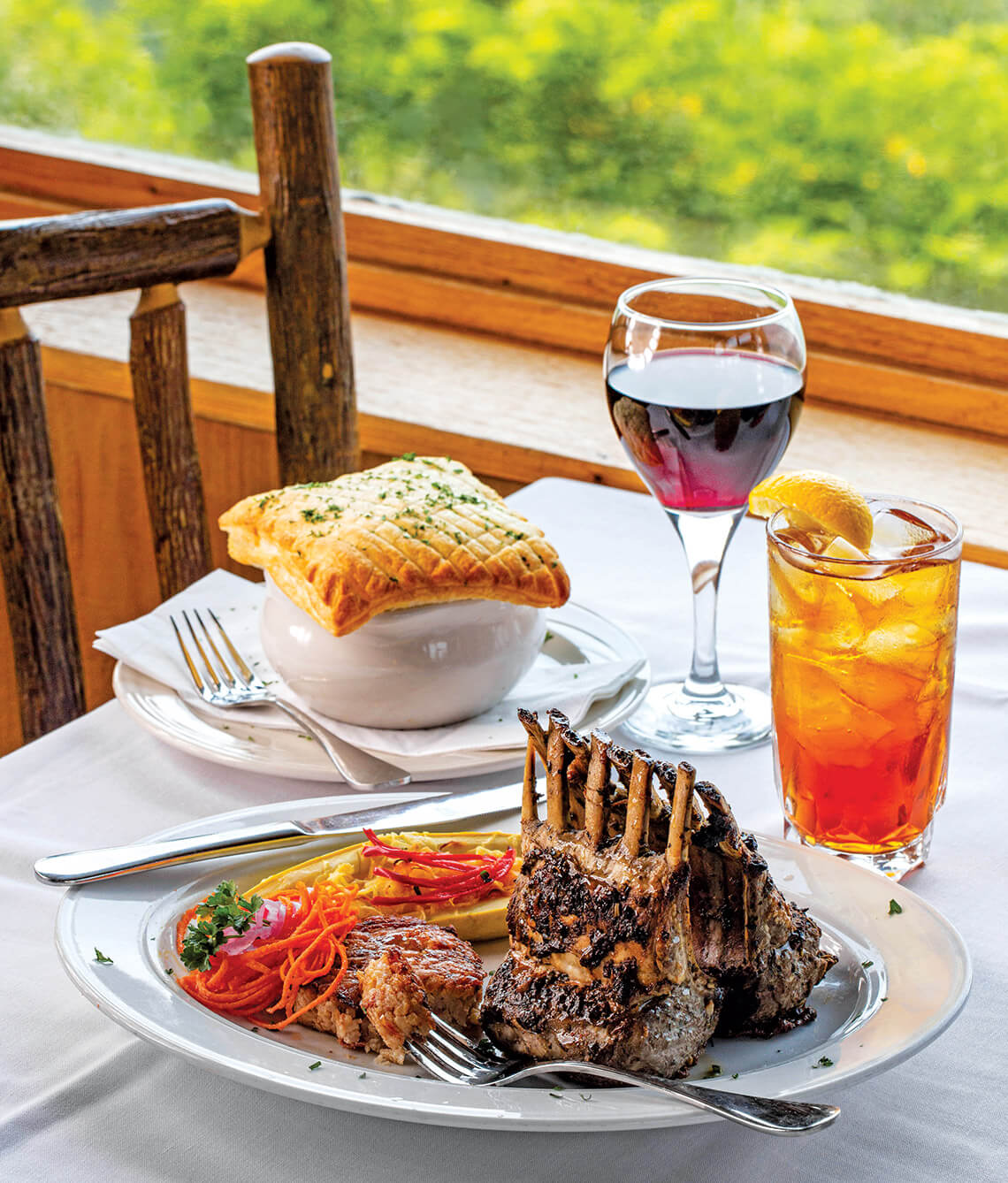 Everything up here is a contradiction, or a question with at least two answers. There’s electricity, but frequent lightning storms, so the hotel has blackout kits with flashlights and water bottles at the ready. The whole project — hotel in a forest — is dedicated to preserving the land and using it at the same time. O’Connell is the owner, insofar as you can own anything in a national park like the Blue Ridge Parkway, and as for the question of ownership in same, no, you cannot. O’Connell, then, is the concessionaire, operating the inn at the pleasure of the president (who nominates the National Park Service director), on a string of years-long leases. I won’t get into how it works — I’m no lawyer — but O’Connell notes that the Park Service regulates all prices and rates. “They know how much the fries weigh,” he says.

“What’s your favorite season?” I ask him, and he says fall before I can even get the question out. “Without a doubt,” he says. “And not just because of the colors. I love it when those last leaves fall and we close the gates.” He pauses. “You’re ready to close. You’re exhausted. It’s so much work. But I’ll tell you what,” he says, and I don’t say anything, because O’Connell is very good at at least two things: running a hotel at altitude and talking about that same hotel. “My favorite day is opening day. I love the excitement of seeing the returning faces of the employees.” He loves his people. This is clear right from the jump. “Overwhelmingly,” he tells me, “guest comments mention how great the staff is, and that means more to me than the food or the view.”

A brief history of the Pisgah Inn traces from the Vanderbilts building a hunting lodge nearby, in 1896, to the founding of the first inn by 1919, to banker Aaron Prevost and a group of investors building the new(er) inn in 1965, to the O’Connells joining as partners in 1979, to Bruce’s mother, Phyllis, eventually marrying Prevost after each of their former spouses passed away, which I only note here because the spectacular observation deck, added in 2017, is dedicated to Phyllis Prevost, who was once Phyllis O’Connell. This is all to say that lightning strikes up on the mountain in a variety of ways. One of those ways is that my great-aunt Beulah Fairhead ran the restaurant and kitchen at the Pisgah Inn in that second batch of early days, in 1968 and 1969. According to her son, my uncle Fred, she baked pies that everyone loved. Her husband worked in what used to be a little service station out front. Uncle Fred says that they knew Prevost through the Mountain Valley Golf Club in Waynesville. 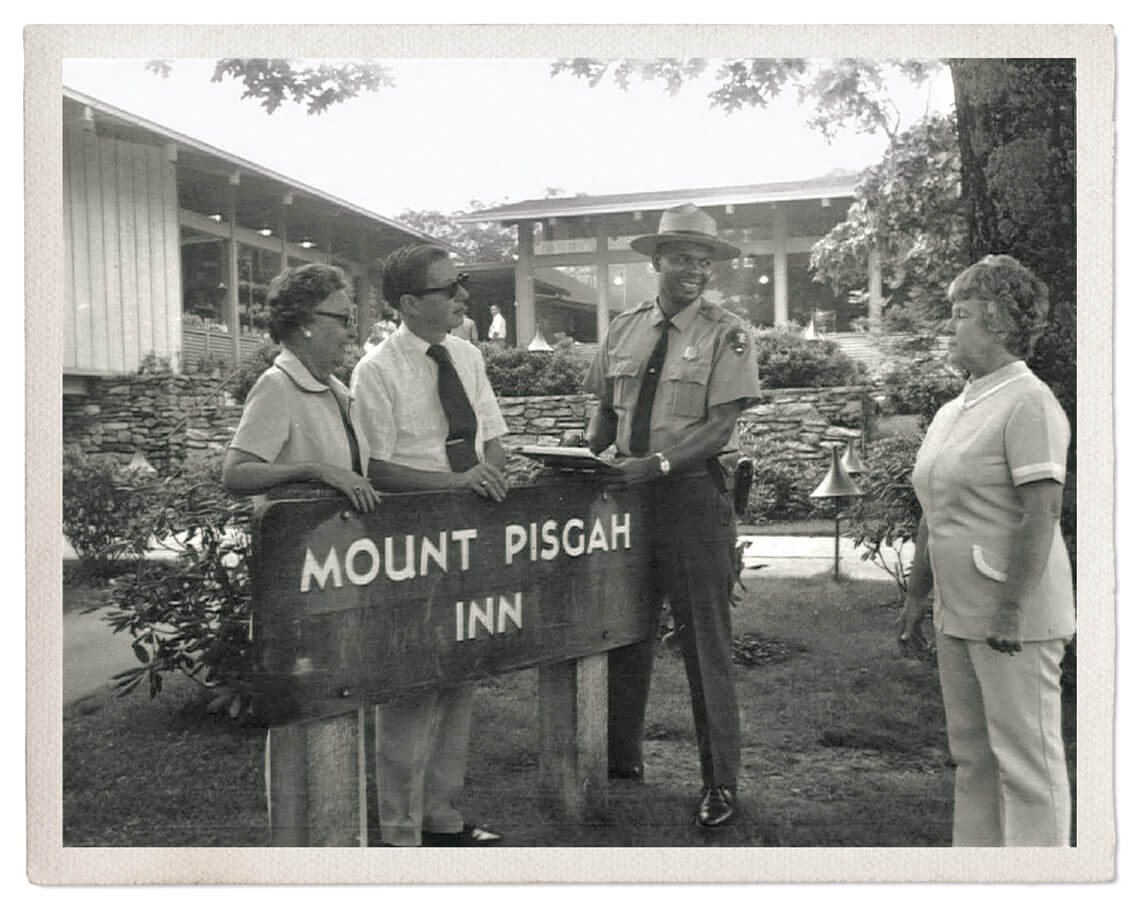 I’m finally not that surprised: Time seems ready to bend any which way up here, even if there is a table of sunset and sunrise times, by month, in the 50-page (!) guest handbook that I almost get O’Connell to confess to writing himself. Of course he stayed 40 years. Of course my great-aunt, a woman I never knew, stood for two summers in these same massive plate-glass windows and looked down over these same valleys. Anything seems reasonable, seems possible. Outside, the wind changes, and the weather swings 20 degrees again.

There’s no air-conditioning in the rooms, but you can get a lovely cross-breeze by opening the front and back windows. Every room has a balcony or a private porch that faces the same view — the place shares a sort of bloodline with smallish wooden beachfront condos, and has about it the same kind of idea: You’re not here to be inside. Come out to the balcony, sit, drink your coffee, your glass of wine. Watch the sunrise if you’re up. All dining is by reservation only, but even if you’re just up on the parkway for a day trip, you can procure, say, a slice of pie, or a cold beverage from the Grazing Deer Cafe, and you can stand out on the wood-and-steel Phyllis Prevost Observation Deck and watch an afternoon age into evening.

O’Connell tells me that the average guest stays two nights. From the moment I get out of the car, though, I get the appeal of doing what Beulah did, coming up for a full season, and then another. The place has a gravity all its own. And it is, after all, a little cozy thing — a room at the inn feels comfortable without being spare or showy. The fries are terrific. The beer selection is far better than it should be. The guest handbook also has a wildflower guide and local bookstore recommendations. Everything about this place says welcome, says stay awhile, says how can we help you, what can we get you, what do you need? But the thing is, you don’t need anything. You just need the view. And maybe something to eat and drink. And maybe a place to lay your head, so you don’t have to leave anytime soon.