Somewhere ahead, there is just enough water. Between two marsh points, along the oyster bars, the creek channel at high tide is barely deep enough for my boat to pass. The catch is that I have to hit it just right. Veer left or right, and there are three ways to run aground: on hard sand, in deep muck, or — the least desirable option — through oyster beds that will chew up both my propeller and my wallet. I line up the bow and bite my lip. Then I gun the motor.

There’s a lesson in this: Some of the best things in life lie just beyond the shoals, and while it’s sometimes possible to carefully pick your way through the shallows, it’s also sometimes best to square up to where you think you need to be — and floor it. Get your life on plane and count on conviction to carry you through.

And be willing to pay the price if you miss your mark.

It was a place freighted with hopes and dreams. And where big plans ran aground.

As we clear the shallows at the creek mouth, I exhale and ease back on the throttle. We’re in deeper water, for now. Julie and I can take our time. We’re on no schedule and have no real plan. Nothing ambitious other than to go where the creek takes us.

Which was not always the case for Harlowe Creek, where hopes and dreams and bristling confidence marked the water for a very long time.

Harlowe Creek flows into the Newport River north of Morehead City. If you drive the new high-rise bridge from Morehead City to Beaufort, it appears out the driver’s side window, far off in that green smudge on the horizon. It’s out of the way and little-known, but this short tidal creek was once considered the linchpin in a navigational network that reached from the North Carolina foothills to Europe. It was a place freighted with hopes and dreams. And where big plans ran aground.

After clearing the creek mouth, Julie and I putt-putt through an open bay. Then the creek narrows, in some areas only 20 feet wide. Broad black needlerush marsh extends on all sides, and we seem to glide through the top of the marsh like a harrier on the wing. And we are alone. We’ve never seen another boat up here. For starters, boats with tall seats and T-tops can’t make it under the two bridges that cross Harlowe Creek. And a lot of folks aren’t willing to chance a busted propeller. After all, for all the trouble and the risk of an oyster bed autographing your hull, there’s nothing much to see.

Except for yellow and gold butterflies winging over empty marsh, and mummichogs dimpling dark waters. 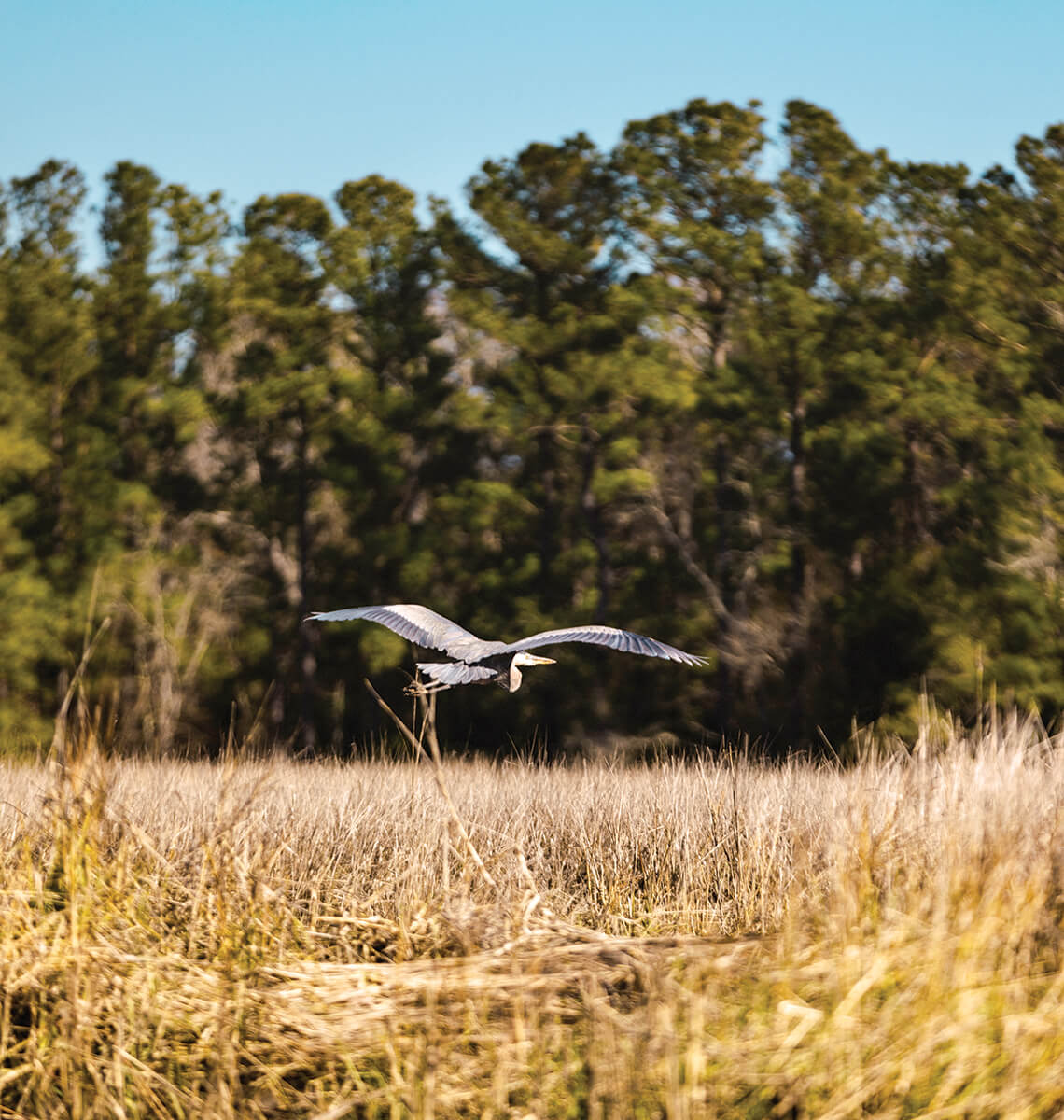 Few boaters chance their hulls in the shallows of Harlowe Creek. But the resident great blue herons know these waters well. photograph by RYAN STANCIL

Natural beauty wasn’t on the minds of earlier visitors. In 1766, North Carolina passed an act to join Harlowe Creek with Clubfoot Creek, five miles north, to connect Beaufort to the Neuse River. With a deep channel, it would be possible to move cargo from New Bern down the Neuse, into Clubfoot Creek, then Harlowe Creek, and on to Beaufort Inlet, the Atlantic, and the rest of the world. Private companies dug the initial ditch, with checkered progress. By 1827, boats could make the trip. But the canal, shallow and poorly constructed, was destined for failure. In 1911, the Adams Creek Canal was completed two miles east. It’s now part of the Intracoastal Waterway, plied by barges and yachts, jonboats and skiffs, humming with boat traffic all year. Like folks hoped the Harlowe Canal would be.

Three miles up the creek, the serpentine channel suddenly straightens like a stick and arrows north. We barely make it under the NC Highway 101 bridge, and I keep an eye on the tide. It’s dicey getting up here — I have to have enough water at the creek mouth to make it over the bar, but not so much that I can’t squeeze under the bridges. Now that we’ve entered the historic, hand-dug canal prism, I keep an eye out — I’ve seen floating logs and other hull-crunching debris in the creek. And it’s not the kind of place you want to get marooned. 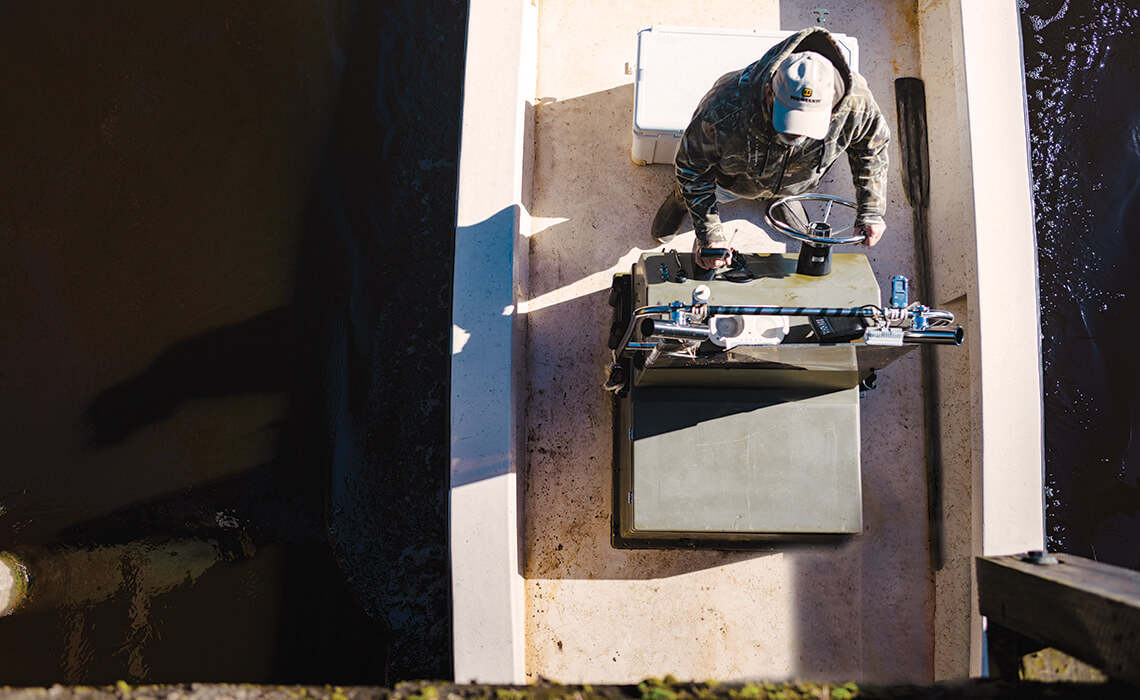 Johnny Dickinson knows that it takes a steady hand and a compact craft to clear the bridges on the Harlowe Creek Canal. photograph by RYAN STANCIL

“It’s kinda creepy up here,” Julie says. The woods along the channel are a tangled mass of storm-blasted cedar, giant old pine trunks, and meager glimpses of open marsh. Pieces of rope trail off into the water, their frazzled ends barely suggesting the boats they once held.

I look into the murky water — the tide has turned. We need to do the same and follow the water back to the creek mouth while there’s still enough to float the boat. I pull off a three-point turn in the narrow channel and head for home.

In February, a historic marker was installed on Highway 101 west of the canal. Now, motorists can learn a bit of the story of that curious straight channel through that forgotten piece of Carteret County. Perhaps they’ll pull over and take a closer look, and wonder what it’s like beyond the water’s bend, where the marsh glows gold in the sunlight. For answers, they’ll have to ask the clapper rails and great blue herons. And the few boaters who don’t mind risking hulls and motors for a glimpse of the past.