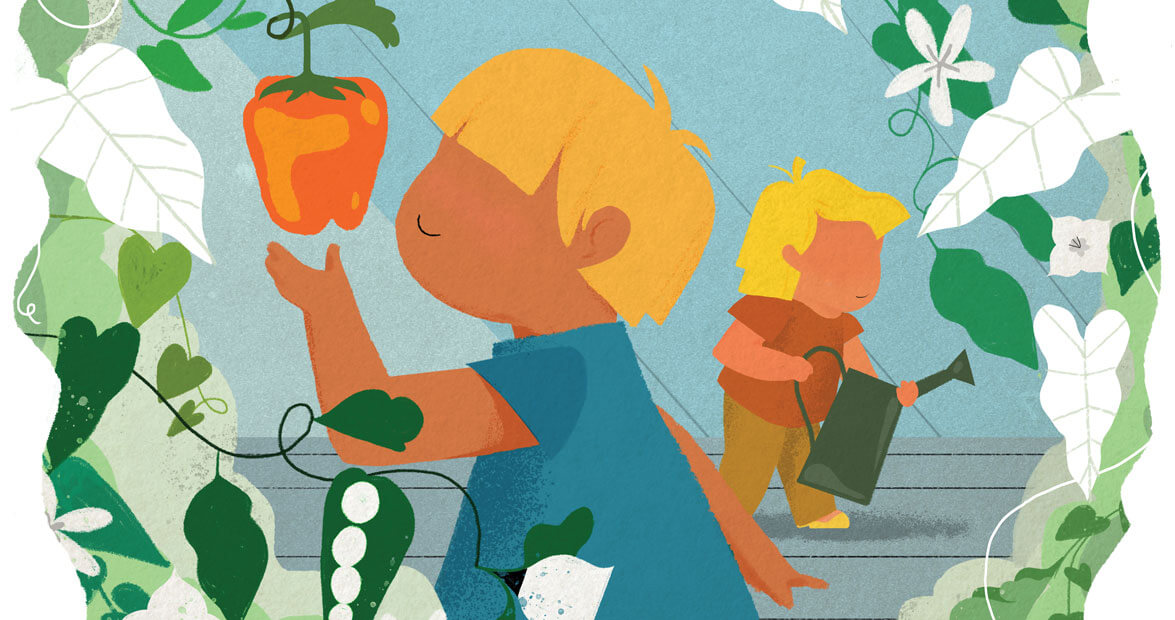 Here is what will overwinter in my small parcel of North Carolina: spinach, in kind of a spotty way, depending on snowfall. Kale, almost always. The row of sorrel we’ve had for nearly 10 years. Certain lettuces, though the red ones do better. The wild arugula springs back up by mid-spring. Mâche will hang on.

We used to have an elaborate greenhousing system for the coldest snaps: clear plastic sheeting tented on wooden stakes, with Wiffle balls on the stakes to keep the sheeting from tearing. We weighed the perimeter down with firewood. Put that on in the last couple hours of afternoon warmth, and you can keep it 20 degrees warmer inside the garden than out.

And I will grant you that the lettuces looked good during the greenhouse years: a little less frostbitten, a little more eager. But then there was this baby boy in our world, and then his brother. Our lives soon became a little more about diapers and Legos and eventually hitting those Wiffle balls, and a little less about keeping an eye on the forecast every day, temporary greenhouse folded carefully to the side of the garden boxes.

Nothing around here is folded very carefully to the side of anything anymore. We’ve learned what’s hardy and what’s not.

By April, the coldest nights are over. Our little front-yard garden is rounding back into shape, ready for these two boys of ours to get in there with trowels and rakes and add this year’s wildly uneven rows to whatever soldiered through the winter. We’ll put in a cherry tomato on each end, maybe, but we’ve moved mostly to greens.

That’s what gives us the greatest yield in our 32 square feet, and, as importantly, you get seedlings right away. These kids are at the sweetest of sweet spots in regard to all this: They come home from school with lima beans growing in plastic cups.

They watch the daffodils and tulips come up. They pay attention to the dogwood blooming, then leafing out. They’re interested, and I cling to this fact with a religious fervor. This is not Netflix or Minecraft. This is hands-in-the-dirt stuff. This is unfiltered knowledge. Plus, they actually eat it.

I’m not exaggerating when I say that it’s difficult to leave the house without my 8-year-old, The Toad, grabbing a fistful of lemony sorrel for the road — my lettuces, he used to call it, before he got old enough to learn differences beyond leaf shapes. It was the first thing he ever ate from the garden.

The Wee, my younger one, has an adjunct box we added when he was 5, in which he mostly digs and makes a mess, but in which he also grew a spindly bell pepper plant last summer. This year, he’s planning bush peas and sorrel of his own.

They’ve just gotten to the age where I can send them out in that long spring dusk to retrieve salad for dinner — and most of what comes in these days is indeed salad, so who cares if there are a few blades of fescue in my bowl every now and then.

The garden’s actually lovely out there by the sidewalk, the dark red of the cool-season lettuces setting off the bright green, brand-new mustards and Bibb and romaine. They grow so fast, the boys say, and I look at the boys themselves, taller every day, it seems, and think: You don’t know the half of it. I like that we garden in the city, like that the boys know that one of the rituals of spring is to sow new seeds every couple of weeks, to keep starting over.

I like to think that all of this will someday matter to them, in the way that it matters to me that my mother used to hand us wide, flat butter lettuce leaves from our own garden.