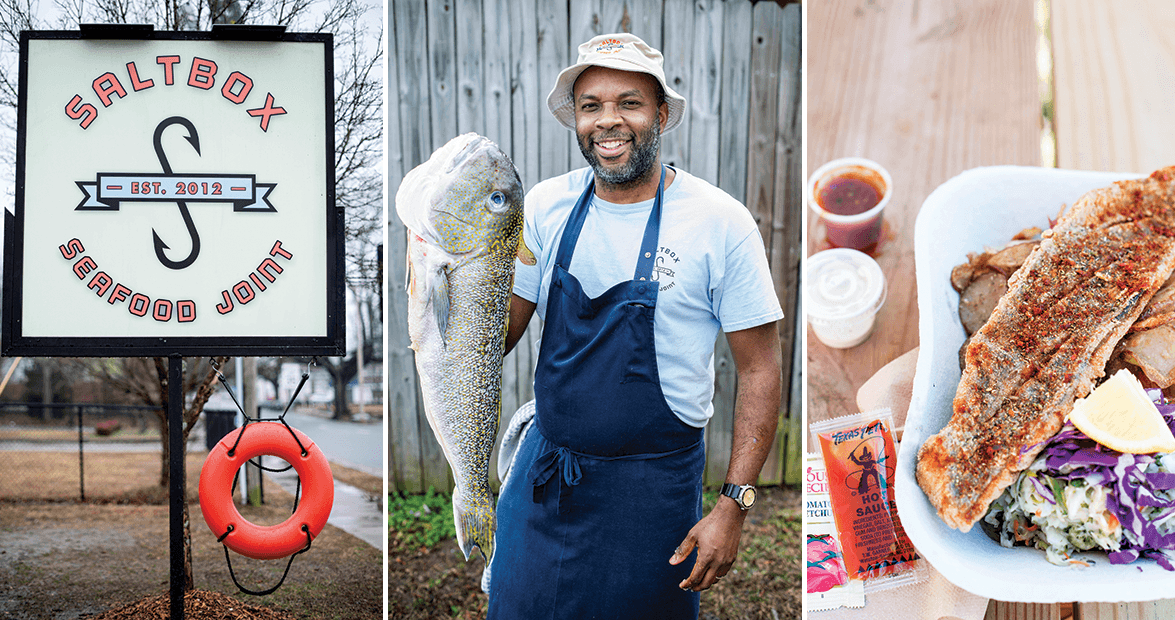 On family outings when he was a boy, Ricky Moore loved to fish in Cold Creek off N.C. Highway 101. The spot is located between his mother’s and father’s home places, in Riverdale and Harlowe, respectively, not far from their home in New Bern.

“We’d all go out there in the station wagon, loaded with bamboo poles to catch drum, spots, croakers, you name it,” says Moore, who today cooks fresh-caught Carolina fish at Saltbox Seafood Joint in Durham. “We’d also gig flounder and go crabbing with string and a chicken leg.”

When it was his turn to use a pole, Moore would throw his line as far as he could, wondering where life might take him. He was born at Marine Corps Air Station Cherry Point, where his father served in the U.S. Army. By the time he was 7, his family had already lived in Germany, Texas, and Kentucky, and returned to New Bern. Wanderlust led him to join the Army right after high school. He served 10 years in Hawaii, where he met his wife.

They briefly lived in Arizona following his 1991 discharge but soon left for upstate New York, where Moore applied his G.I. benefits to attend the Culinary Institute of America. Before long, he was working in the kitchens of top restaurants in Chicago and Washington, D.C. Jobs followed at Apicius in Paris, a two-star Michelin restaurant, and Chef Daniel Boulud’s acclaimed Daniel in New York City. Moore’s growing reputation earned him a spot competing against Chef Michael Symon on “Iron Chef America.”

The world was his oyster, but Moore was surprised to discover that the place he most wanted to start a new venture was his home state. And, true to his childhood roots, he wanted to cook fish.

A way with fish

“Look at me: I’m a line cook now,” Moore quips as he preps for the lunch crowd in the 205-square-foot kitchen at Saltbox Seafood Joint, which he opened in a former hot dog stand in Durham’s hip but gritty Old Five Points neighborhood in October 2012. “I’ve never been so inspired.”

With an impressive résumé and a recognized name, Moore could have located Saltbox in a larger space or a more affluent setting. Instead, he followed his gut — and heart — and opted for a no-frills location and a vibe that mirrors his view of what good food is truly all about. Here, there’s no dining room. No bar. No valet parking, hostess, fancy decorations, or upscale ambience. But no matter. Customers still line up every day, rain or shine, in the grass-and-gravel parking lot outside Saltbox, often crowding in before Moore has a chance to flip the window sign from closed to open.

Many are regulars; others are first-timers who have heard about Moore’s way with fish from friends or read about him in the national food magazine Saveur, which declared that “Saltbox fulfills our wildest fantasies of what a takeout fish shack can be.”

But it’s not the press or even the word of mouth that keeps people coming back. The draw is simple: It’s the taste and aroma of perfectly cooked, imaginatively seasoned, impeccably fresh fish.

Moore’s gleaming supply is trimmed into portions and dusted with Saltbox’s signature spice mix, a fragrant blend of toasted fennel and lemony coriander that seals the meat under a whisper-thin crust. The fish is then dunked into a sizzling fry basket or grilled on a smoking-hot cast-iron skillet.

Accompaniments, including honey-drenched hushpuppies and hand-cut coleslaw, are simple but artfully staged — the red cabbage goes on the coleslaw last, to keep vibrant colors separate. House-made chips are amped up with the addition of fried onions and green bell peppers.

“If hash browns and French fries got together and had a baby, this would be it,” Moore declares as he seasons a batch and flips them in a large metal bowl to ensure that each crunchy bite is delicious.

While Moore loves serving almost any kind of fish, he takes particular pride in introducing his customers to ones they may never have tried before. He’s got a preacher’s way about getting past people’s fear of “fishy fish,” like mullet or mackerel, by praising it as “full flavored.”

Moore’s regulars wouldn’t have it any other way. Chris McManus drives 20 minutes from Mebane at least three times a week to eat at Saltbox. “I’ve had the sheepshead, mullet, and trout, but I really like the catfish,” says McManus, who previously had never been a regular anywhere but his mother’s kitchen table. “It’s like I remember from childhood, but with some nice herbs on it.”

And lunchtime regular Shea Broussard, who moved to the Triangle three years ago from Texas, echoes McManus as she claims her order of sweet Hush Honeys. “I love that y’all are here in Durham,” she says. “I grew up in the bayou and always had access to great seafood. I love that I can do that right here, without being anywhere near a pier.”