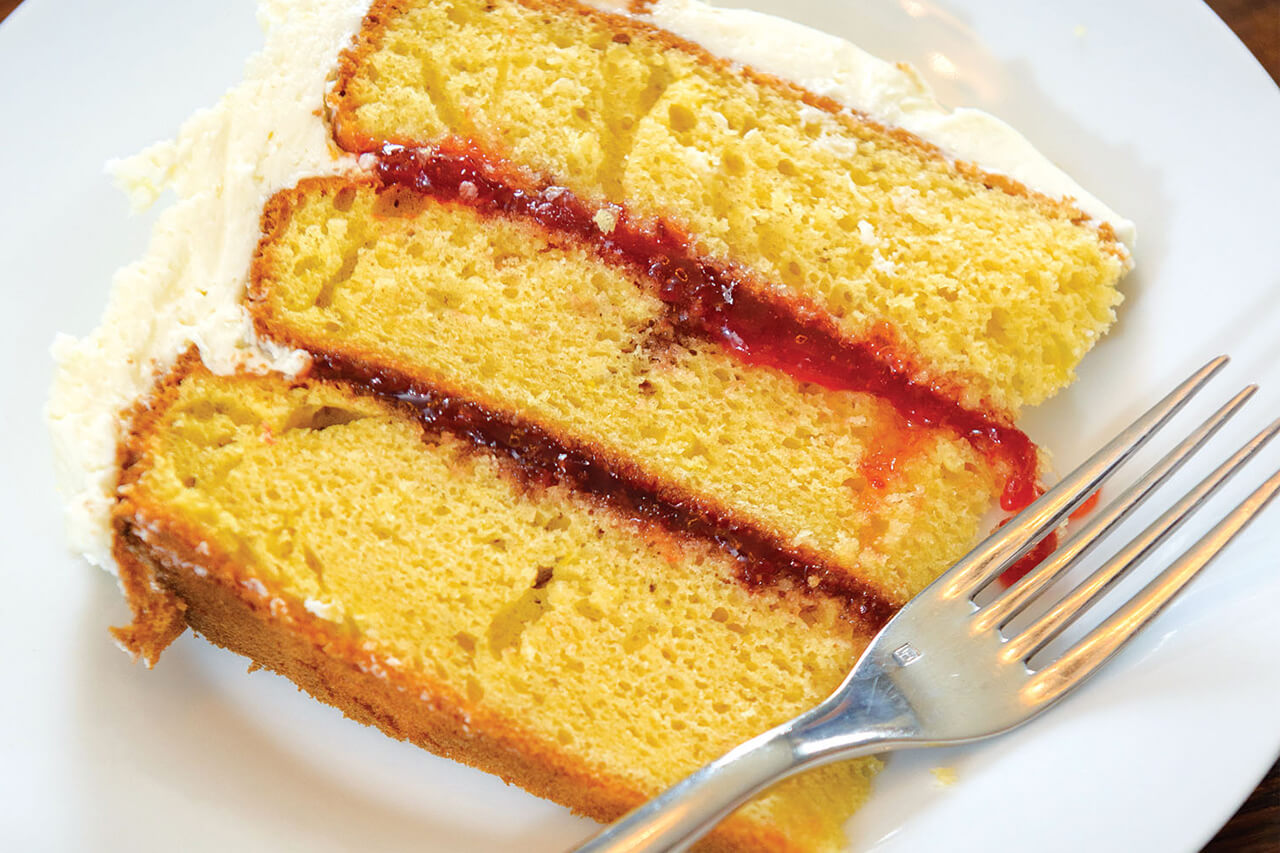 As a young man, Brendan Cox never needed to consult a calendar to be reminded of an upcoming family occasion. He’d know something was up when his late mother, Susan Miller Cox, gathered the ingredients to bake a hot milk cake.

“It was a clear signal that grown-ups would be coming over for a celebration,” recalls Cox, chef-owner of Oakleaf, a farm-to-table restaurant in Pittsboro. “Hot milk cake with hot milk icing is not your everyday cake. But it was my family’s go-to for birthdays and big holidays, especially Christmas and Easter.”

Today, it’s his family’s signature cake for Mother’s Day. His wife, Leslie, who grew up in nearby Sanford, says the cake is a way of keeping her mother-in-law — and her husband’s grandmother, Jacqueline Miller, known as “Gigi” — present in the thoughts of their three children. 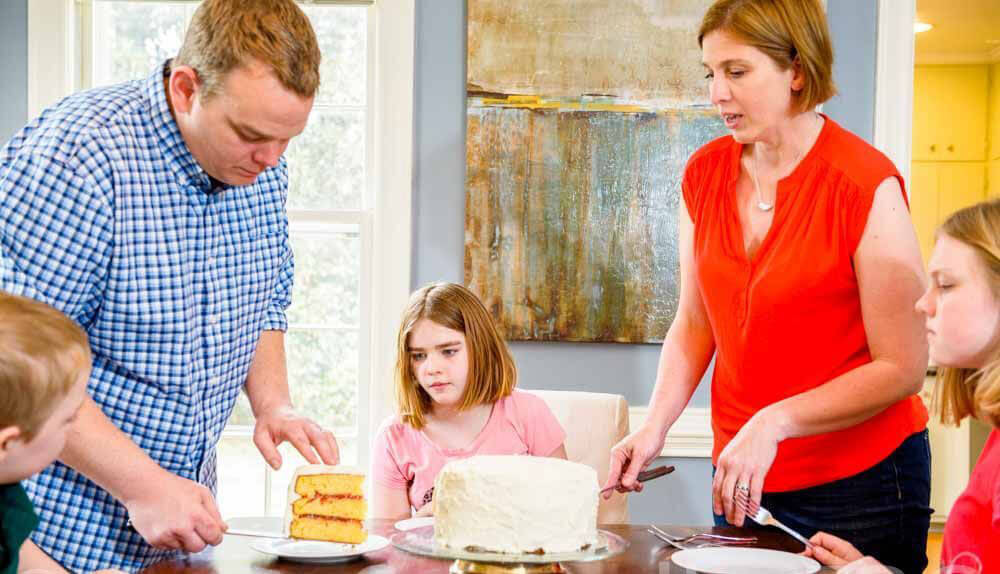 “I’m not a very sentimental person in general, but for some reason, I am with food memories,” says Leslie, who fondly recalls the first time she tasted the cake and its distinctive, custard-like buttercream icing. “Because Brendan’s mother is no longer with us, it’s become a way for us to hold on to that piece of her.”

The Cox family treasures the aged recipe cards written by Brendan’s grandmother and mother, both of whom lived in Maryland. As typical of the years they were recorded — the 1940s for the cake and the ’60s for the icing — the cards do not include essential details like what temperature to set the oven or how long to bake the cake.

“What we do now may not be exactly as they made it,” says Brendan, who admits he once tried to “make it better” by applying high-end culinary techniques that proved too fussy. “It’s close enough that it takes me back to my childhood when I take a bite.” 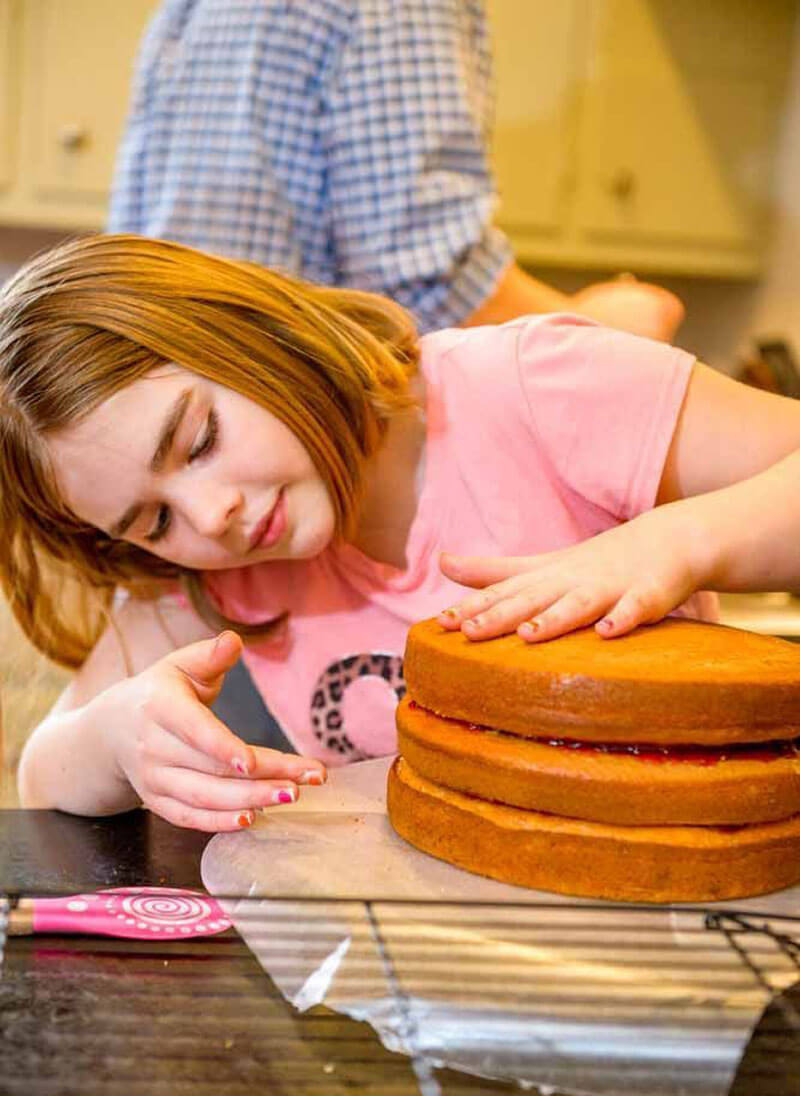 Leslie and the couple’s middle daughter, 10-year-old Charlotte, recently baked another hot milk cake as a birthday treat for Leslie’s mother, Janice Long of Sanford. A twist was added to the recipe a few years earlier when they made it for Grandpa Larry Long’s birthday, adding his favorite strawberry jam between the layers.

“It creates a nice balance between the moist crumb of the cake and the rich icing,” Brendan says. “And, now that we’re settled in North Carolina, it helps to make it our own Southern version.”

A recipe that is closer to the Cox’s cake can be found in Marion Brown’s Southern Cook Book, which became a sensation when first published in 1951 by the University of North Carolina Press. The book was reprinted some 30 years later to ensure that its traditional Southern recipes remain a resource for cooks and culinary historians.

“A favorite old Southern cake, easy to make,” Brown wrote of the hot milk cake recipe she included, which is attributed to the kitchen of Mrs. Eugene G. Shaw of Raleigh.

If you’d like to serve hot milk cake to the special mother in your life on Mother’s Day, Cox shares the recipes to their version below.

Measure flour and baking powder, and sift several times into a medium bowl. Set aside.

Melt butter in a saucepan. Add milk and heat until milk is just hot to the touch.

Add dry ingredients to the egg mixture all at once, stirring to combine. Add hot milk slowly, stirring into the thick batter. Add vanilla.

Place rounds of parchment paper inside of three buttered, 8-inch round baking pans. Divide batter evenly among the pans. Bake for 20-25 minutes, rotating the pans midway, until lightly golden and pulling away from the sides of the pan.

Remove from oven and cool in pan on a wire rack for 15-20 minutes. Use a flexible rubber spatula to loosen and remove the cake from the pans, then return to wire racks until completely cool.

Warm milk in a saucepan over medium heat until just hot to the touch. Add cornstarch and stir until thickened, like a loose custard. Remove from heat and cool completely.

Remove parchment paper from cake layers. Place one layer on a cake stand or serving dish. Cover layer with 1/3 jar of jam, spreading evenly while leaving a plain border of at least half an inch. Add remaining layers and repeat.

Insert several metal cake testers or thin, wooden skewers into the cake to prevent layers from sliding while frosting. Apply frosting liberally, using an offset spatula. When cake is fully covered, remove skewers and use spatula to create decorative swirls. Top with crushed nuts or sprinkles and garnish with fresh strawberries.

Want to receive more recipes like these each month?