The story I am about to tell could happen anywhere in the world — it is, as I write, happening across the globe.

A man and a woman meet, fall in love, marry, and begin a life together that lasts longer than the average life span when they both were born. The world around them changes so dramatically that it is, by the time this couple settles into retirement, nearly unrecognizable. Wars are fought, laws enacted and repealed. The rhythm of existence is, by the time the couple has been married 60 years, so altered, so foreign, that it feels not far off from the futuristic movies that were popular when the couple was freshly married. Though people don’t travel by spaceships, you don’t even need gas to drive certain cars to the grocery store, and you can get a ticket for running a red light even if the cop is sitting in a booth at Krispy Kreme.

Her name is Hallie. His name is Jim. Though the couple keeps to some of the old ways — they purchase stamps at the post office, they write and mail letters rather than send them instantaneously through a network of electricity and air — they also adapt to the changing world. And to the changes of the place where they were born, the place both of them have, for their entire life together, called home. Though this story could happen anywhere — is likely happening everywhere, love and devotion being immune to zip code and time zone — this version of it happens, and is still happening, right here, in North Carolina. It’s a story of tobacco field and furniture factory, a tale rooted in the Coastal Plain, Piedmont, Foothills, and Blue Ridge. The writer Eudora Welty once said that because place confines character, it defines character. The couple in this story is less confined by their place than happily and willfully contained within its borders. And so their union is inseparable from the landscape where, after 64 years, it thrives still.

She’s a Foothills girl from Lenoir, a factory town in the shadow of the Brushy Mountains. She’s the daughter of a Presbyterian minister and his hardworking, homemaking wife. She’s one of seven children, all of whom attend college. The four boys all go to Davidson; the three girls attend Salem. After Salem, she pursues her master’s degree in history at a time when the only women admitted to the University of North Carolina at Chapel Hill are Chapel Hill natives and graduate students. She has come of age during the Depression. She works herself through school, picking up dirty laundry, serving lunch at the high school, taking shifts at the library. Her diet is so limited that midway through her degree, she contracts scurvy. 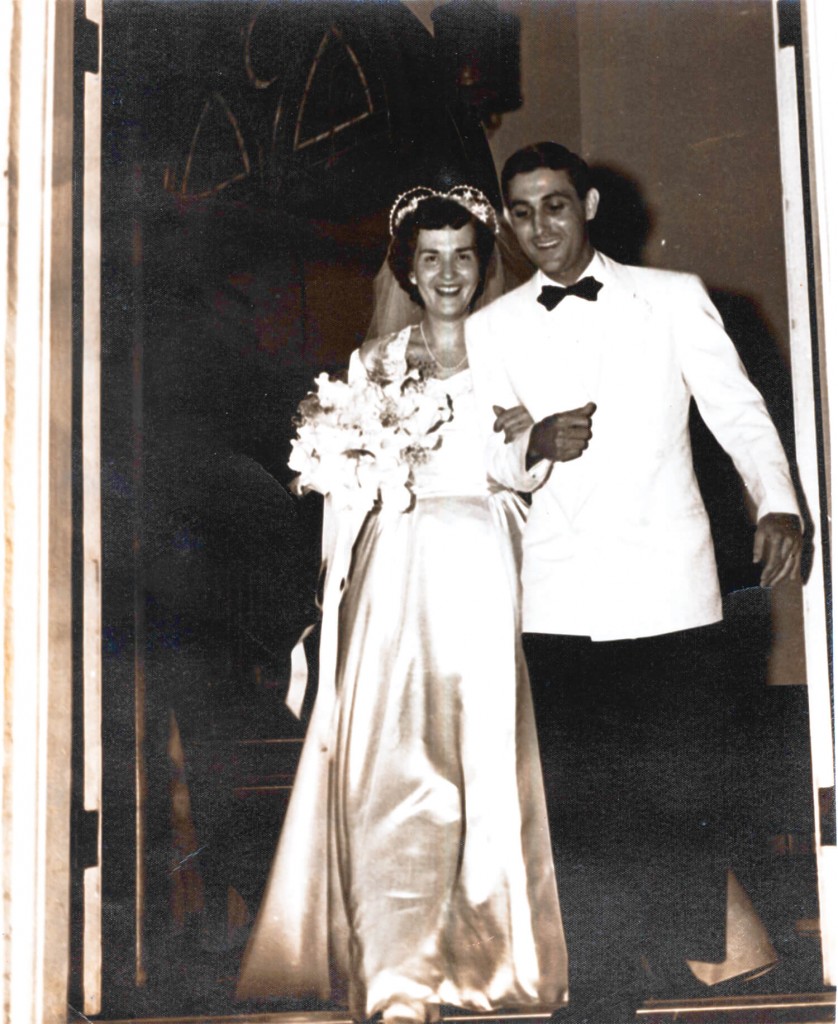 In 1950, a little more than a year after a blind date, the Foothills girl and the Coastal Plain guy got married in Lenoir.

He comes from Tarboro, deep in the Coastal Plain, a place of slow brown rivers and still swamps, of tobacco and cornfields. He was born in 1924, a year before she was, and has known hardship from the moment of birth. His father, who ran a store, a farm, and a clothes-pressing concern, dies of pneumonia when the son is only 5. His mother struggles to hold her family of eight kids together. The oldest children go to work to help support the youngest. He works as a delivery boy at a drugstore before he even enters high school, and then migrates after graduation to the shipyards of Newport News, Virginia, to weld battleships for the coming war. Like thousands of other boys his age, he enlists in the Army soon after war is declared. One night, in a muddy field outside of Aachen, Germany, he takes a bullet to the shoulder, another to the leg. He recovers from his wounds, is sent back for more fighting, survives, returns home, and — aided by the GI Bill — attempts something no one else in his family has done: He goes to college.

Their first date is a blind one: an evening with two other couples at a dance hall on what he still calls “the Burlington road.” She’s a black-haired, fair-skinned beauty. Chapel Hill is flooded with veterans, and, given the ratio between men and women, she could afford to pick and choose. But she likes this modest, slender, olive-skinned boy with the eastern North Carolina accent. They come from different backgrounds, different landscapes. She knows rocky soil; he grew up with the feel of sand between bare toes. He’s seen more of the world than she has. She was raised to be worldlier than he was.

For three months, the government sends his GI Bill stipend to a boy with the same name enrolled at East Carolina University. With money borrowed from his brother, he splurges on a 15-cent ice-cream cone, takes it to her when she’s working the night desk at her dorm.

He’s a terrible dancer, she says 64 years later, but he was awfully polite.

When he first proposes to her during a walk in the arboretum on the UNC campus, she laughs. But in 1950, a little more than a year after that blind date, they marry in Lenoir. They move to Siler City, where he takes a job as a reporter at the Chatham News, and she works briefly as a social worker before beginning a long career in education. They share a strong work ethic and common values rooted in the policies of Roosevelt’s New Deal. They’re proud to live in a state that the political scientist V.O. Key praised as the most progressive in the South. Their native heroes are Frank Porter Graham and Terry Sanford. They settle into early-married life in Siler City, where they involve themselves in the social and civic life of the community. Three years into their marriage, they have the first of five children. Between the second and third child, there’s a miscarriage. She is pregnant six times in eight years, and is thankful that their house is right across the street from Chatham Memorial Hospital.

Thirty miles up U.S. Highway 421, in Greensboro, four students sit down at a lunch counter in 1960, adding momentum to perhaps the greatest social change of the couple’s lives together. They share a binding belief in the equality of all humans. They teach their children tolerance and respect. They expect them — as the state motto goes — to be rather than to seem.

With savings put aside from his 16 years as a reporter, he buys a half interest in a newspaper 90 miles east. The girl from the Foothills who met her husband in the Piedmont arrives in the land of swamp and tobacco field, and the boy who made it as far west as Chapel Hill heads back Down East.

In Clinton, they settle in a ranch house two miles outside of the city limits. Not long after they arrive, the local schools succumb finally to the edict of Brown v. Board of Education. Both are at the forefront of the battle to end segregation — he in the editorials he writes, she in the classrooms where she teaches, and at the community college where she becomes an administrator. The mid-’60s usher in other changes they’d just as soon do without. The records their children play sound like fingernails scraping a blackboard to a couple who danced in the old Tin Can to the sounds of Kay Kyser. No, thank you, they say to the Beatles and Stones, we’ll stick with Sinatra and opera, though Hallie does, in time, develop a taste for Streisand and Bacharach.

When the country turns 200, they celebrate 26 years of marriage. This story is not a fairy tale; their union is no less free of conflict and disagreement than their home state is without turbulent times. Marriage, they recognize from the start, is by nature an exercise in hard work, compromise, and sacrifice. They’re known to argue, sometimes about politics — she turns against the war in Vietnam before he does, and in the early days of the 1968 Democratic primary, he sticks with Humphrey while she backs Bobby Kennedy — but they both delight in watching Senator Sam Ervin untangle the lies of Watergate on the national news. Still, disagreements occur, and one or the other of them might sometimes leave the room or even the house to cool off after a spat. But they can’t stay upset with each other for very long.  “Didn’t make any difference if we had a fight,” he says years later. “We still had to get up in the morning, feed the kids, get them ready for school, go to work. Wasn’t any time to waste staying mad.”

Early on they learn not to intrude upon the things that make each other happy. He knows never to schedule an outing during a UNC basketball game and doesn’t react when, after Carolina wins the NCAA championship in 1982, she announces her intention to leave all of their savings to Dean Smith. She never questions her husband as he roams around the Coastal Plain, attending auctions and digging up old whiskey bottles, which he displays in the den. She ceases to roll her eyes after the umpteenth visitor asks about his collection and he quips, for the umpteenth time, “She empties ’em, I save ’em.”

All five of their children, at some point in their college careers, attend the university where their parents met. Though they never tell their offspring to love their native state, their children love it with a fervor that feels genetic. Three of the five children leave the state, but the state never leaves them. They return as often as they can, and maintain the exile’s enthusiasm for the land of the longleaf pine.

In retirement, they spend 20 years in a mountainside house in Yancey County, the peaks of the Black Mountains visible across the Toe River Valley. She had always wanted to return to the mountains. He wants only what she wants, which is to be with him, travel with him, take care of and be cared for by him. Heart blockages, knee replacements, a move to an assisted living facility — the inevitable accompaniments of aging bring them even closer. When the mountain winters prove too much, they return to live in the town where they met, and where they live still.

It’s hard for them to recall the days when they shared a phone line with a neighbor, though the cell phone their children insist on sits, uncharged, in a drawer. Some technologies they embrace: She pops up on Facebook. He learns to download an attachment. Though there are changes, both local and global, that sadden them — the state budget cuts in education, the war in Iraq — they rejoice when a black man is elected president. They are thrilled when the state they have known always allows their son to legally marry his partner of nearly three decades. But they’ve always been what these days is known as “inclusive.” She has, on occasion, been known to be cordial to State and even Duke fans.

They love their home state as unconditionally as they love their children. North Carolina, to them, is far more than ideology or geography. To them, home, like love and marriage, is a concept that doesn’t translate into words. Other people might divorce, and they might move to South Carolina, bless their hearts, but my parents, though they pledged no vows to the ground beneath their feet, will love it as they have each other: for better or for worse, in sickness and in health, forever, always.

This story appeared in print as “Forever Always.”