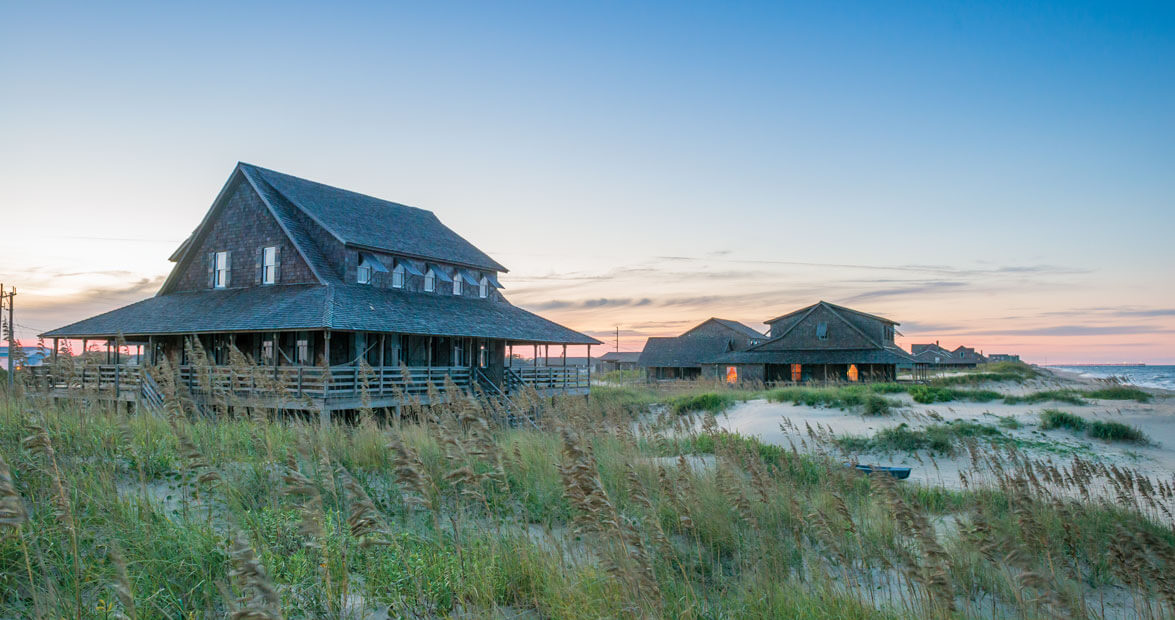 “Mother says I was no trouble because I would lie on the floor and watch the pigs under the house,” Frances Inglis recalls. As “What I Did on My Summer Vacation” topics go, this one gets an A. But it was all in a summer day’s play in the 1930s for Inglis, who was “always at one grandmother or another’s cottage” at Nags Head. Her great-grandfather bought a cottage and three lots on the oceanside in the early 1900s for $70.

More than a century — plus multiple nor’easters and hurricanes — later, six cottages of that era still stand. The remarkable longevity of these particular houses can be traced to two factors: their builder, and the families who’ve preserved the cottages — and the way of life they offer — by doing, well, nearly nothing to them.

Planters from the “northeastern crescent” of Ahoskie, Elizabeth City, Edenton, Tarboro, and Williamston had been sending their households — including livestock — to Nags Head since the 1830s to escape the miasma and “yellow chills” of the inland summer, says Peter Rascoe III, a historian, preservationist, and Southern Shores town manager. In the early 20th century, soundside vacation homes expanded along the oceanfront, with a distinctive style attributed to a short, wiry, Elizabeth City carpenter named Stephen J. Twine.

Twine, who died in 1973, did most of his building and remodeling on a one-mile length of beach. His decisions for function over form are the stuff of studies, such as that by Catherine Bishir, author of North Carolina Architecture. Twine constructed his cottages of cedar shingles used as siding — made from cypress or juniper wood, that could withstand water. The houses had wide porches on two, and sometimes four, sides, featuring lean-out, as opposed to straight-up, seating. Windows have propped shutters hinged at the top to allow sea breezes in, but keep beating sunlight out. The slant of the hip roofs echoes the shapes of the surrounding dunes. Twine ran upright timbers from the first to the second floor, “tie-testing” the house with corner straps. The cottages were perched on pilings so that they could be moved, as indeed they have been. 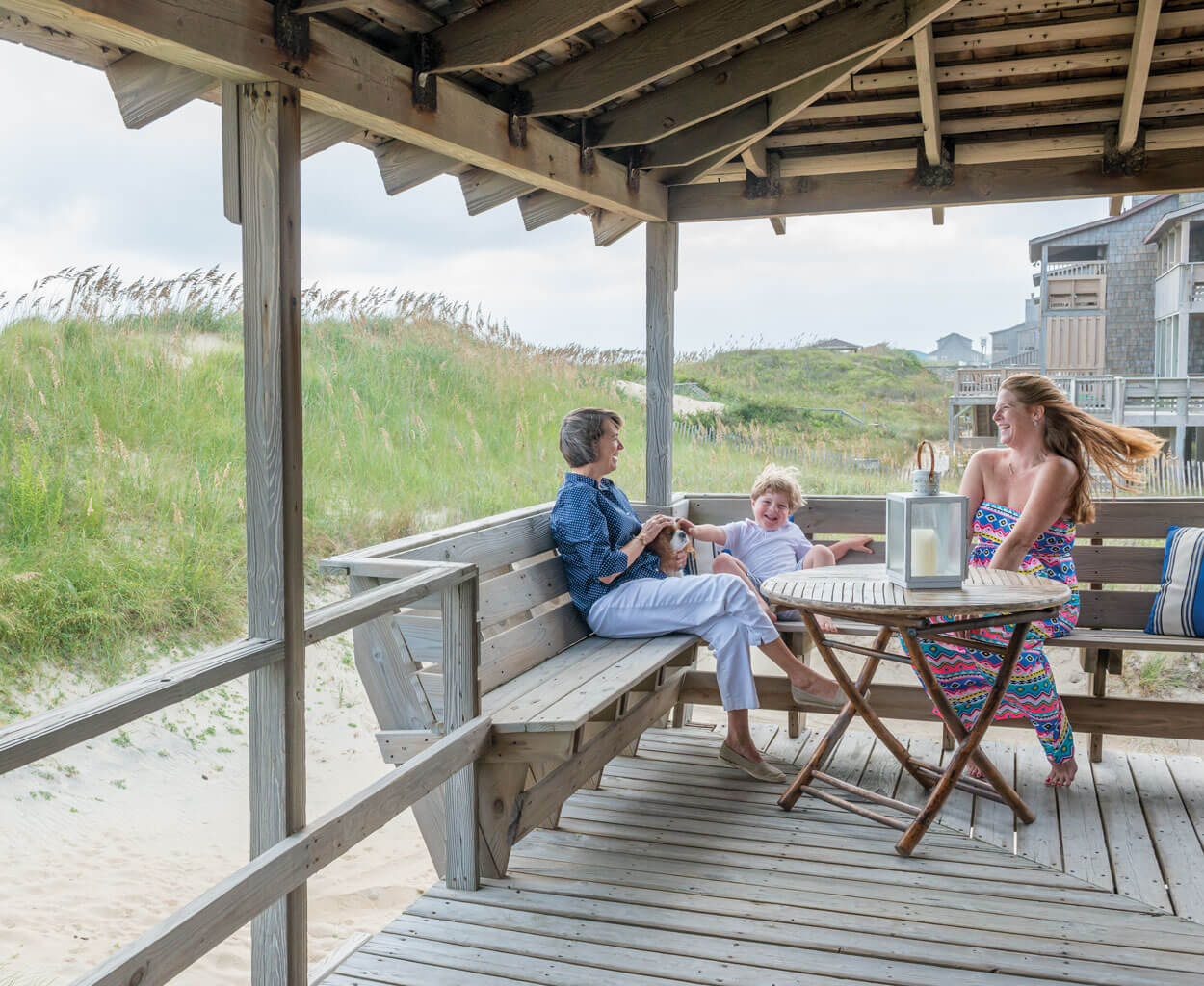 On the iconic slanted benches, three generations shoot the breeze, as well as enjoy it. photograph by C2 Photography

South Carolina’s Pawleys Island may have bumper stickers proclaiming “Arrogantly Shabby,” but these grande dames of Nags Head have their own eloquent moniker: the Unpainted Aristocracy, a term coined in the 1920s by Jonathan Daniels, eventual editor of Raleigh’s News & Observer, to describe their weathered, yet elegant, appearance.

“What’s unique about this little strip is that it’s not protected, regulatory-wise,” Rascoe says of the area that, in 1977, was federally designated as The Nags Head Beach Cottage Row Historic District. “It’s only regulated by each family’s sense of heritage. These are third and fourth generations at the least, and in some cases, fifth and sixth. No laws, no code, no governing body exists that requires them to paint or build or maintain anything whatsoever, as with Charleston or Edenton. It’s all up to the owners,” Rascoe, who is 57, continues. “It’s truly a miracle.” For some six years, he championed public tours of 8-12 houses per year on behalf of Preservation North Carolina.

Sophie Foreman Jordan spends summers at a house built in 1916 that still has no interior walls, and certainly no heat or air-conditioning. When she was a child, ice was delivered up the steps in huge chunks, and stored in a metal container. “You’d pick at the ice for your drinks. The walls were bulleted with pick holes because you stabbed the pick back in the boards. If you wanted to hang up your bathing suit, you just banged a nail in the wall,” Jordan says. Now known as the Wood-Foreman cottage, the house has been moved three times from its original placement.

“It’s all up to the owners. No laws, no code … requires them to paint or build or maintain anything whatsoever. It’s truly a miracle.”

Not ice pick holes, but remembrances of every other sort are lettered on the walls of Margie Worthington’s family’s cottage, known as the Outlaw Sr. Cottage, built in 1885. Penciled on the interior of a cabinet door is an ancient diagram for building a sailboat. Clearly, “someone was having a discussion one night and needed paper, and just used what was at hand,” Worthington says. If you know where to look on a particular wall, you’ll find the notes that a family member scribbled every June 22, around the time of the summer solstice: “Win this war” in 1942, and later, “Japan has surrendered.”

Inglis recalls the blackout requirements of World War II, when “you had to use curtains on the windows and couldn’t walk in front of your cottage after dark.” She saw tracer bullets in the darkness from her family’s cottage, Spider Villa, so called because of a visitor’s humorous poem — still tacked to a wall — describing the damp, spidery house in rhyming verse.

Because his father had been in the war, John “Possum” Silver, 63, played army in the lot beside their 1860 cottage throughout his childhood in the ’50s and ’60s. “My cousins and I were completely unsupervised,” Silver says. “We’d rip old wood off garages and dig a whole network of foxholes in the sand deep enough to stand in, put the boards on top, and then blankets on top of those. We’d steal cigarettes from the houses and thought we were hidden, but you could see smoke coming out of the sand.” Later in the day, the adults drifted from cottage to cottage, having cocktails, and “they’d fall in our pits,” Silver continues. We were inside watching from the second story, and jumped off the roof so they couldn’t catch us.” 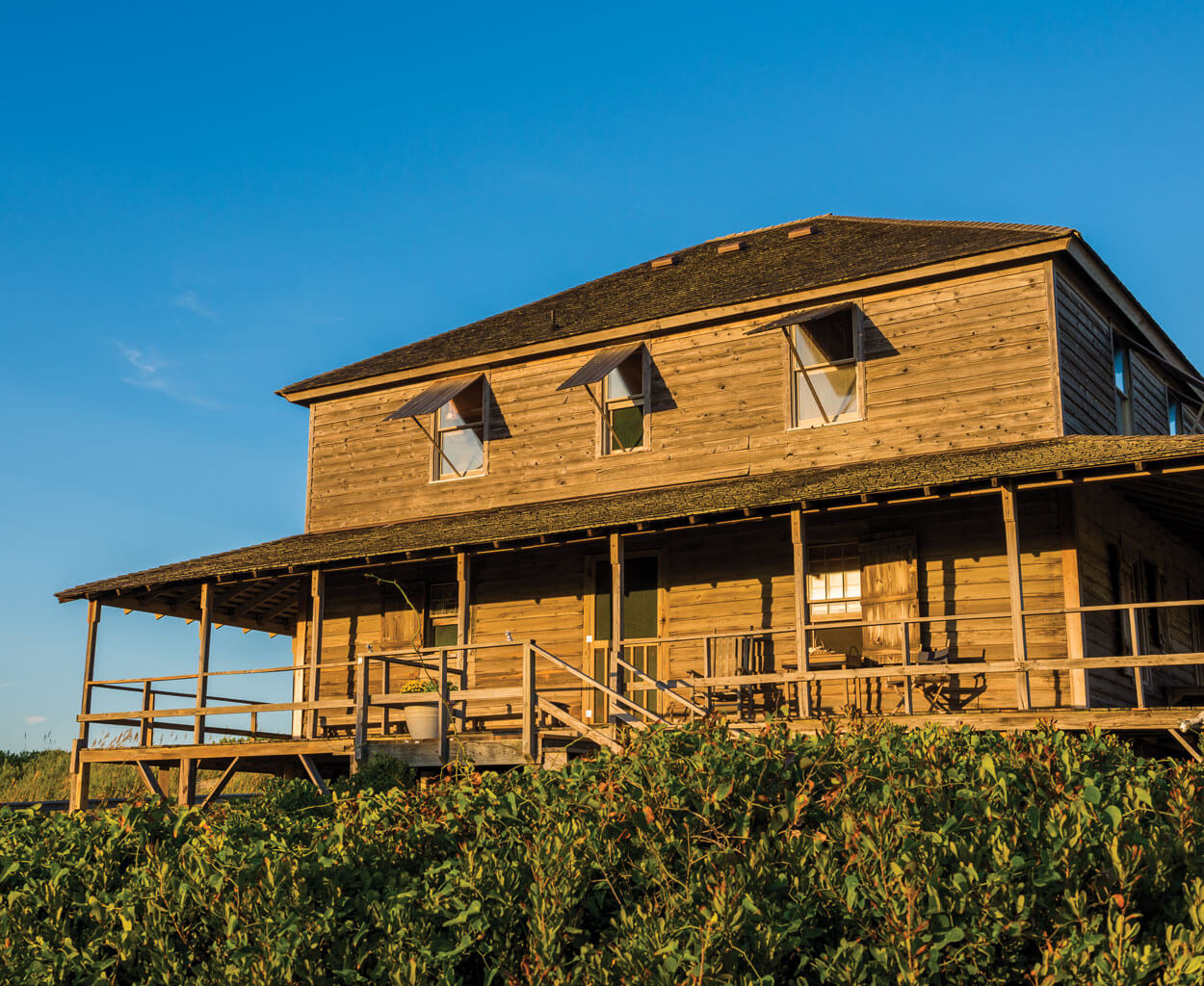 Nothing “rambling” here. The plain, yet functional, Outlaw Sr. Cottage displays a typical hip roof meant to mimic the lines of the dunes. photograph by C2 Photography

The evening cocktails were part of a daily routine that continues to this day. “You took a dip with your friends and cousins before breakfast, always,” Inglis says. (At 86, she still does so on her summer visits.) Then a big breakfast, back to the beach, and inside for a seated, served lunch. “Everyone went back at 5 for the evening dip, and to help the fishermen pull in the nets. You brought a dishpan for the fish for supper,” she says.

Jordan, who’s of a younger generation, concurs. “One sibling would be at their cottage for a month, and when we helped pull in the nets, the new arrivals would come running out, and that’s how you knew the families had changed.” Jordan loathed the required, post-lunch quiet time. “It was hot; the bed was sandy,” she recalls. Still, the children could search under the house for rusty nails, for which parents paid a penny apiece. Or play records, making sure to stand on a magazine to move the needle, or risk getting shocked, since the floor was always damp.

“Electricity was sketchy,” Rascoe confirms. In many houses, light pulls still consist of a string and a punctured shell, and a door handle is a wooden spool. Worthington’s family still eats on the table where her great-grandfather was laid out — in full Confederate Army uniform — after he died in August 1921. “The Captain wanted to be buried in his uniform,” Margie says. “So he brought it with him every summer, and it hung on the back of the bedroom door.”

Thankfully, another Unpainted Aristocracy standard feature — a rag and a bucket of turpentine on an outdoor step — no longer exists. Because almost 400 ships were sunk off Nags Head during World War II, never mind the countless vessels that pumped their bilges at sea before refueling (a practice that’s now illegal), “you’d have tar squishing between your toes if you walked on the sand, and tar on your elbows if you swam in the ocean,” says Silver. Coming indoors meant a turpentine scrub. Also gone from the Outlaw Sr. Cottage is the contraption of metal plumbing pipes and laced rope at the top of the steep, narrow staircase. “You lowered it over the stairwell when you wanted to take a nap,” Worthington says, so that the cats and dogs and billy goat couldn’t get upstairs. 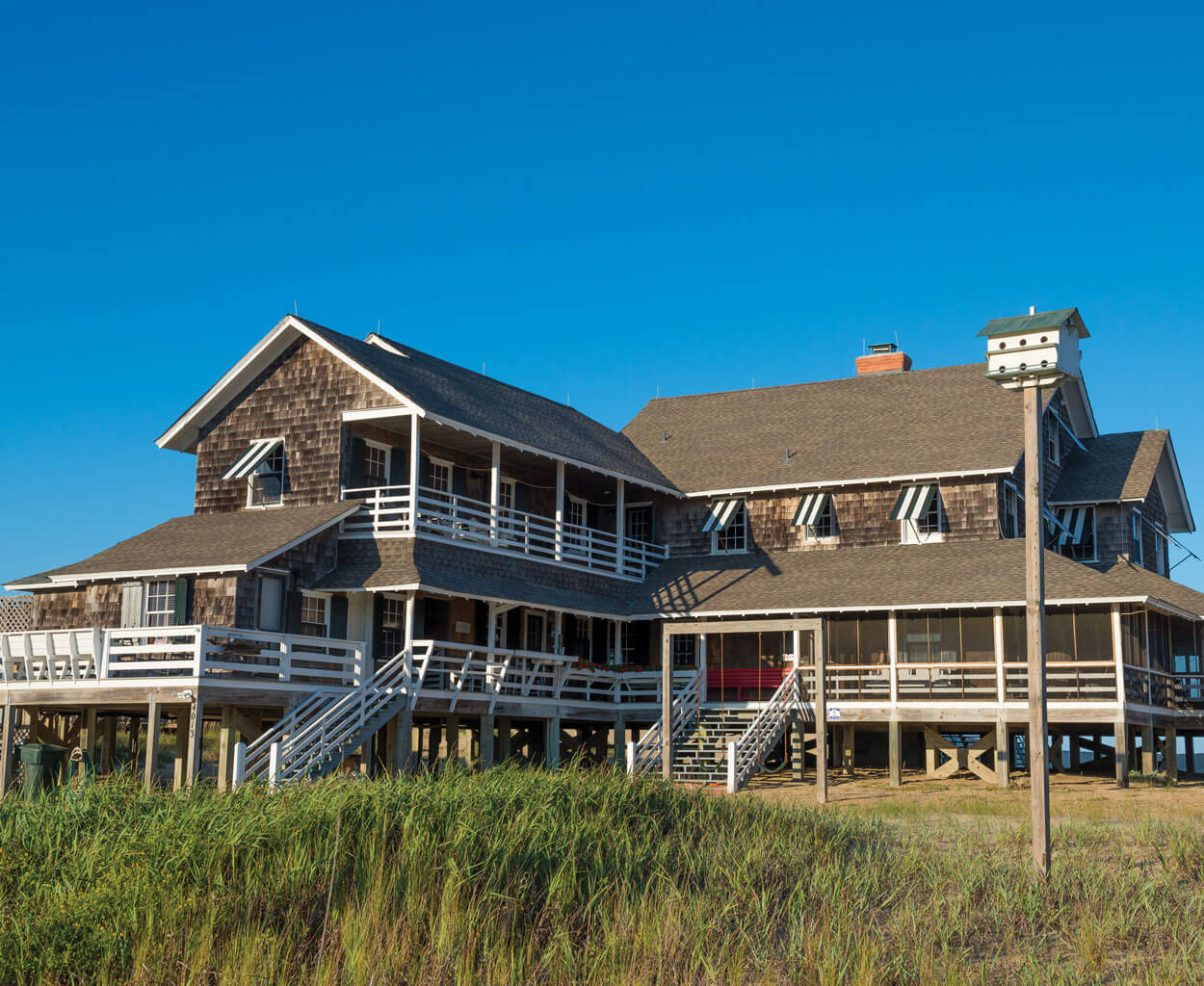 Stately on stilts, the cedar-shingled Buchanan Cottage has a porch at nearly every turn. photograph by C2 Photography

The building boom in Nags Head began in the 1960s. A summer population of 40,000 has followed. But life remains much the same for the Unpainted Aristocracy. When one house had suffered too much damage and had to be torn down, the family built a new one on the same footprint, and with the same layout, as the original one. “It’s a tribute to each family that they’ve maintained the look and feel and authenticity of the original homes,” Rascoe says. The last time Worthington’s house was moved, it was rolled across the sand, and she remembers that an old, old man seemed to be in charge. “Is this going to work?” she asked him.

“We won’t know until we troi,” he answered, in true Nags Header fashion.

Perhaps even more than the history the homes represent are the stories they house, the same chorused tales of different generations, unchanged but for a detail here and there, like the cottages themselves. “You keep waiting for a sellout, for a demolition company to show up,” Rascoe says, but this fate seems as unlikely as the sea draining dry. “So many people have lived so much life in this place,” Worthington says simply, as simple as the structures themselves.