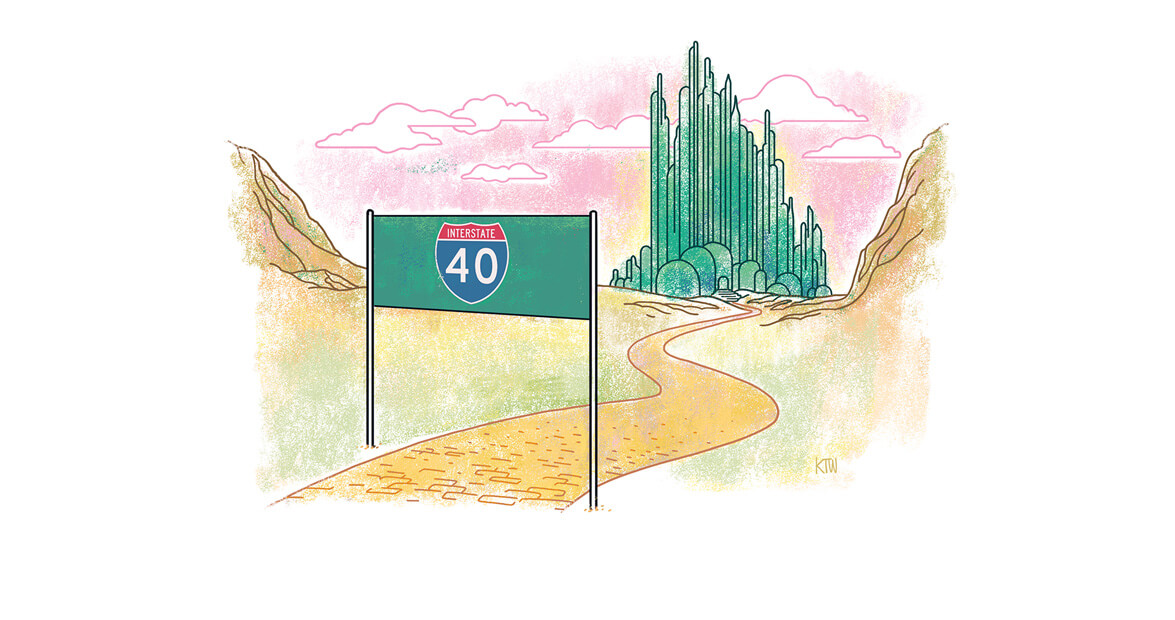 Emerald green has long been my go-to hue, my gold standard for measuring all that is lush and luminous. Since sixth-grade essay assignments, I’ve garnished my sometimes purple prose with emerald references. In searching for similes, and mining for metaphors, emeralds have thrust through the barrenness of writer’s block to put a sparkle in my eyes. (Yes, I did just write that. Even my laptop is groaning.)

Looking back on my attempts to be a Dickens, I have compared summer foliage, pine boughs, mountain streams, kudzu, dewy grass — even those big reflective interstate signs — to our state’s official precious stone.

I say this because, in my imagination, emeralds are the superlative shade of green, never mind that my only experience with the stone has mostly been in the abstract. Until recently, I’d never held one in my hand, and had rarely ever actually seen one.

My first encounter with emeralds came in cinematic form. It was after following a yellow brick road with a terrier named Toto. As a kid, the flying monkeys and melting witch freaked me out, but I found it spectacular how Technicolor depicted the Emerald City of Oz.

I watched the movie (several times) before reading L. Frank Baum’s The Wonderful Wizard of Oz in the fourth grade. There, in the theater of my mind, the Emerald City gleamed bigger and brighter than it ever could from the tube in my living room. It was one of the first books I had ever read from front to back, and one of the first to stir in me an appreciation for imagery. “Where the blocks were joined together were rows of emeralds, set closely, and glittering in the brightness of the sun,” Baum wrote.

Before long, I was plumbing the depths of my soul to unleash a torrent of shimmering similes, watching as my creative juices cascaded onto the page to marinate the manuscript with luscious imagery. (Sorry, dear reader. That one was a real doozy, too.)

It wasn’t until I began turning phrases for this magazine that I learned that emeralds are our state’s precious stone. Of course, if we can have a state toast and a state insect, we can surely have a state stone, especially one of such stateliness. Well, my pretty, I guess there’s no place like home to seek out this wonderful gift of geology.

So here I am, cruising west on Interstate 40, passing signs (the color of emeralds!) with this town name and that exit number, setting my prospects on a mine that has struck a bonanza of tourist green. The place is Emerald Village — an enchanting, Oz-like name if ever there was one — a few switchback curves away from Little Switzerland.

Upon arrival, however, the place is as hushed as a boomtown gone bust, its great gravel parking lots vacant. The mining season had ended the day before.

As I walk the grounds, a fellow with a whitening goatee stops his car to ask whether, in fact, I’m lost. As it happens, he’s Alan Schabilion, the owner of Emerald Village. He’s kind enough to show me around and leads me to a small assortment of emeralds from nearby Crabtree Mountain. Here and in Hiddenite, a community some 80 miles east, are the only places in the country where emeralds have been mined commercially. The ones I see are indeed green, and indeed beautiful, but they’re not quite the dazzling gems of my imagination.

Back in the city, under bright lights and encased in glass, is where the mother lode of our state’s emerald riches commands awe. Here, at the North Carolina Museum of Natural Sciences in Raleigh, are four of the largest emeralds ever found in North America. The centerpiece is the 64-carat Carolina Emperor, the largest cut emerald on the continent.

This is it, I tell myself while gazing through the glass. This is the object that has added so much green glimmer to my word pictures. The gem is stunning — indeed, dazzling — but my mind invariably wanders into metaphors, and I can’t help but compare this model of lushness and luminosity to … a Sprite bottle.

Sprite, for all its sparkle, is far from a precious stone. And it’s pathetically unpoetic. I yearn to compare this beauty before me to something heavenly and magical, to uncap my inner Dickens and gush with literary effervescence like a shaken carbonated beverage. (Sorry.)

In truth, emeralds need no embellishment. They are the paragon of pretty, and to compare them to anything else — be it a Sprite bottle or fescue in the morning sun — borders on insulting. Some things are meant to be left alone in the universe. But in the often messy process of chiseling out prose, emeralds will always beckon like some diamond in the rough.