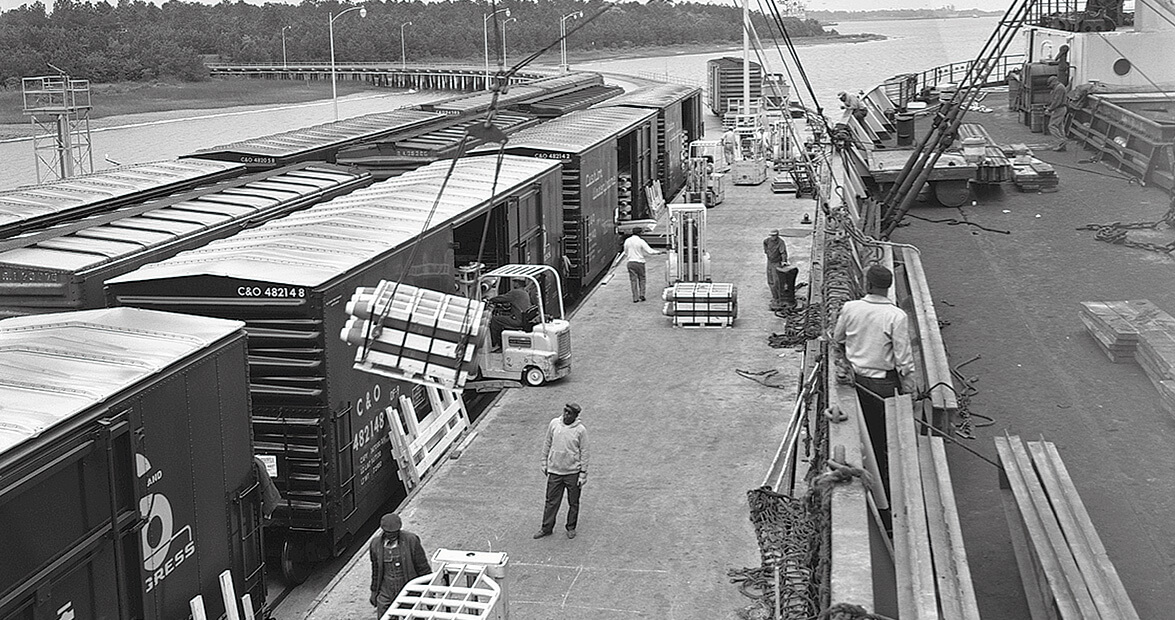 The signs stir our curiosity, stoke our imagination, and evoke a sense of foreboding: “U.S. Property. No Trespassing.” They’re posted one after another on a chain-link fence that goes on and on. Topped with barbed wire, it cuts through a pinescape of sandy white soil and the occasional strands of Spanish moss.

Inside the fence are ponds where alligators lurk and bug-eating plants await their next gooey meal. There are railroad tracks to nowhere and towering cranes ready to lift boxes of bullets and bombs. Beyond the cranes, the Cape Fear River rolls its mile-and-a-half-wide tide on its final thrust to the Atlantic.

This is where the mighty ships come in to load or unload their cargo of weapons: rockets, missiles, howitzers, grenades, projectiles, pyrotechnics. The Military Ocean Terminal Sunny Point (MOTSU), run by the U.S. Army, is the nation’s largest ocean terminal for military munitions. “Wherever we’re fighting is probably where we’re sending stuff, or they’re sending stuff back to us,” says Steve Kerr, the deputy to the commander at MOTSU.

When the wars began in Afghanistan and Iraq, ammunition and other combat equipment shipped from MOTSU. The cargo arrived at the terminal by train and truck from ammunition storage depots across the country. A bustling time, to be sure, but not as frenetic as during the Vietnam War and Operation Desert Shield, when ammunition was loaded onto pallets instead of being stuffed into containers.

That was the “old-fashioned way,” says Frank Colvin, a plans officer who’s worked at MOTSU for 33 years. By the 21st century, all ammunition shipments were made in containers. “It’s far more efficient,” he says. “It takes less time. That’s the reason why the entire commercial world uses containers for shipping.”

During the Vietnam War, the port loaded as many as six ships at a time with armament. And in the early 1990s, as the Persian Gulf War raged, more than 466,000 tons of combat cargo passed through MOTSU in transit to the Middle East.

Out among the pines

MOTSU sprawls across 8,600 acres on the west side of the Cape Fear River, brushing up against the towns of Boiling Spring Lakes and Southport. The Department of Defense owns another 2,230 acres across the Cape Fear on Pleasure Island, which is used as a buffer zone for Kure Beach and Carolina Beach. A vast majority of MOTSU’s real estate is longleaf and loblolly pine forest, all providing a barrier between the shipping operations and the general public.

It was, after all, a catastrophe that served as the genesis for MOTSU. On July 17, 1944, military munitions exploded at Port Chicago near San Francisco. They detonated while being loaded onto a ship bound for the Pacific combat theater in World War II. More than 320 sailors and civilians were killed and about 390 others were hurt. The fireball soared nearly two miles into the sky. The port was flattened, every building in the neighboring town was damaged, and the rumble was felt as far away as Nevada.

That disaster led to stricter safety procedures and more enhanced training for handling explosive cargo. When MOTSU was built between 1952 and 1955, it had a critical feature that Port Chicago lacked: space. Its administrative buildings are positioned four miles from the wharves. “We have a lot of empty space, but that’s to provide safety,” Colvin says. “In case there’s an accidental detonation in one area, it won’t cause a detonation in another area.”

Driving a government-issued Chevy van along the center wharf, Colvin is giving a rare visitor’s tour of the terminal. He’s among the more than 250 civilians employed here, along with five soldiers. These days, the port receives 35 to 40 ships a year. Loading each one with explosive cargo is a process that can take two days or two weeks, depending on the quantity.

All containers are lowered delicately and positioned so that certain munitions are separated from others. It’s the same approach for storing cargo on-site: To avoid accidents, some munitions are kept on lots well away from other kinds of weaponry. Those railroad tracks to nowhere are actually spurs surrounded by berms, allowing railcars with explosives to be parked for a while. From the air, they look like spindly Christmas trees stenciled into the forest.

The truth about MOTSU

In its 60-year history, MOTSU has experienced one deadly accident on board a ship — and it didn’t involve explosives. In June 2001, an engine fire broke out on a cargo ship, killing two men. Colvin says that’s the only time he’s felt even slightly concerned for his safety. As for whether a calamity like the one at Port Chicago could happen here, officials say it’s extremely unlikely.

“Conditions have changed the way that we handle our cargo now,” Kerr says. “It’s basically a benign operation that’s run in a very safe manner.”

But when a place has such restricted access, our imaginations tend to go rapid-fire. People likely wonder whether nuclear missiles have come through MOTSU. The short answer: Probably not. Colvin says the official line is that he “can neither confirm nor deny” that such weaponry has ever been at MOTSU, but he also notes that the safest means of transporting nuclear warheads is by air.

Still, in 1994, a shipment of spent nuclear fuel rods arrived at MOTSU from Europe for disposal at the Savannah River Site nuclear reservation in South Carolina, a move our neighbor to the south strenuously opposed. Another hot-button shipment occurred in 1970, when tugboats pulled a World War II ship laden with deadly nerve gas to be sunk 245 miles off the Florida coast.

In the communities around MOTSU, locals are mostly laid-back about their low-key, high-security neighbor. “They know what they’re doing,” says Boiling Spring Lakes resident Forest Propst as he heads inside Kopp’s Kwik Stop II.

“It’s never even crossed my mind, really,” says the store’s owner, Richard Kopp, who’s lived in the area for 20 years. “I’ve never heard anybody say anything about it.”

Longtime locals know that tools of destruction head for war zones from this riverbank with the cheerful name of Sunny Point. But the property is still mostly the domain of longleaf pines and woodpeckers. Once you understand the goings-on behind the gate, the forbidding signs and barbed-wire fence lose a little of their edge.