As a child in Brooklyn, F.M. Hooper Jr. loved playing cops and robbers and going to war movies. He watched the battleship USS North Carolina being built at the Brooklyn Navy Yard in 1937. In 1948, Hooper enlisted and boarded a train and then a bus for basic training, expecting to arrive at Parris Island in South Carolina. “Be sure to sit at the back,” his father told him. Instead, Hooper arrived at Montford Point, a boot camp for Black recruits in Jacksonville.

“Two dates define Jacksonville,” says Glenn Hargett, former assistant city manager for Jacksonville and current assistant manager for Onslow County. “The first is December 15, 1940, when the federal government announced the establishment of a Marine base here to train for amphibious landings in Europe. They needed somewhere near the coast, with beaches and a river.” In 1940, the rural community of Jacksonville had a population of 873. By 1950, the city’s Sears store was the highest-grossing Sears in the entire United States. “The impact of the base on this community cannot be overstated,” Hargett says. 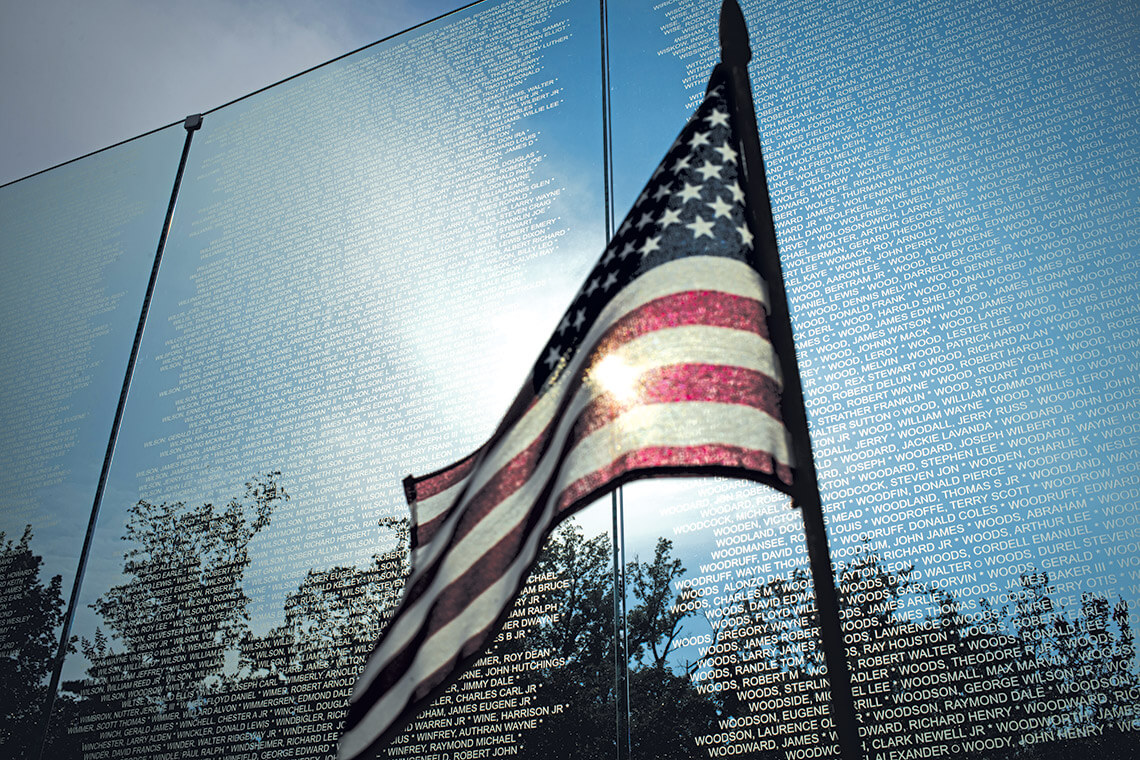 The names of those who died in the Vietnam War are etched on glass panels at the Onslow Vietnam Veterans Memorial at Lejeune Memorial Gardens. photograph by Andrew Craft 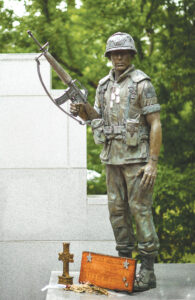 The statue at the Beirut Memorial at Lejeune Memorial Gardens. photograph by Andrew Craft

At the gateway of downtown Jacksonville stands Lejeune Memorial Gardens, a unique collection of memorials all instituted by the people of the community; none were mandated or compelled by any other cause. The memorials are within short walking distance of one another, yet each is entirely different. The Beirut Memorial commemorates what Hargett believes is Jacksonville’s second most important day, October 23, 1983. In a matter of seconds, thousands of pounds of explosives killed 220 Marines stationed as peacekeepers housed in a barracks in Beirut, the greatest loss of life for Marines in a single day since D-Day at Iwo Jima. The majority were based at Camp Lejeune. “They were our neighbors,” Hargett says, “the Sunday school teachers, the soccer coaches.” In a wooded, landscaped area, one of the memorial’s granite walls reads, “They Came in Peace.” The wall on the left bears the names of the lost. In a niche between the two broken walls, a statue of a Marine stands watch, underscoring the fact that these men were serving as peacekeepers, not fighters. Designed by North Carolina State University graduate students, the memorial is one of the largest military memorials ever constructed and paid for by private donations.

My father fought in Korea. He got married and spent his honeymoon driving cross-country to report for duty in San Diego, where the Army gave him a hernia operation, then shipped him out. I grew up hearing snippets of Japanese in all of his funny sayings; bookshelves in our house held his collection of Asian objets and art. Yet my most treasured evidence of his military service is a curling black-and-white photograph of him wearing baggy fatigues and leaning against a naked tree trunk in an equally barren background. His netted helmet is pulled low over his eyes, the straps dangling beside his cheeks. Long legs folded up to his shoulders, he’s looking downward, reading a letter. My mother’s one-word description is written in the scalloped-edge border: “Pitiful.” This is a memorial, too.

The median age in Jacksonville is 23. Yet an astounding number of ex-military personnel from the Vietnam era chose to stay on in retirement. They are responsible for the Onslow Vietnam Veterans Memorial, second in size only to the national Vietnam Veterans Memorial in Washington, D.C. Surrounding a covered reflecting pool, a circular glass wall is etched with the names of 58,229 who gave the ultimate sacrifice, as well as the many still-unaccounted-for POWs and MIAs, in alphabetical order. Within the pool, there is a fountain with five jets, each representing a branch of the Armed Forces that served on active duty in Vietnam. The memorial is shining, precise, bright, open, and optimistically transparent with its elements of water and glass, yet profoundly moving. 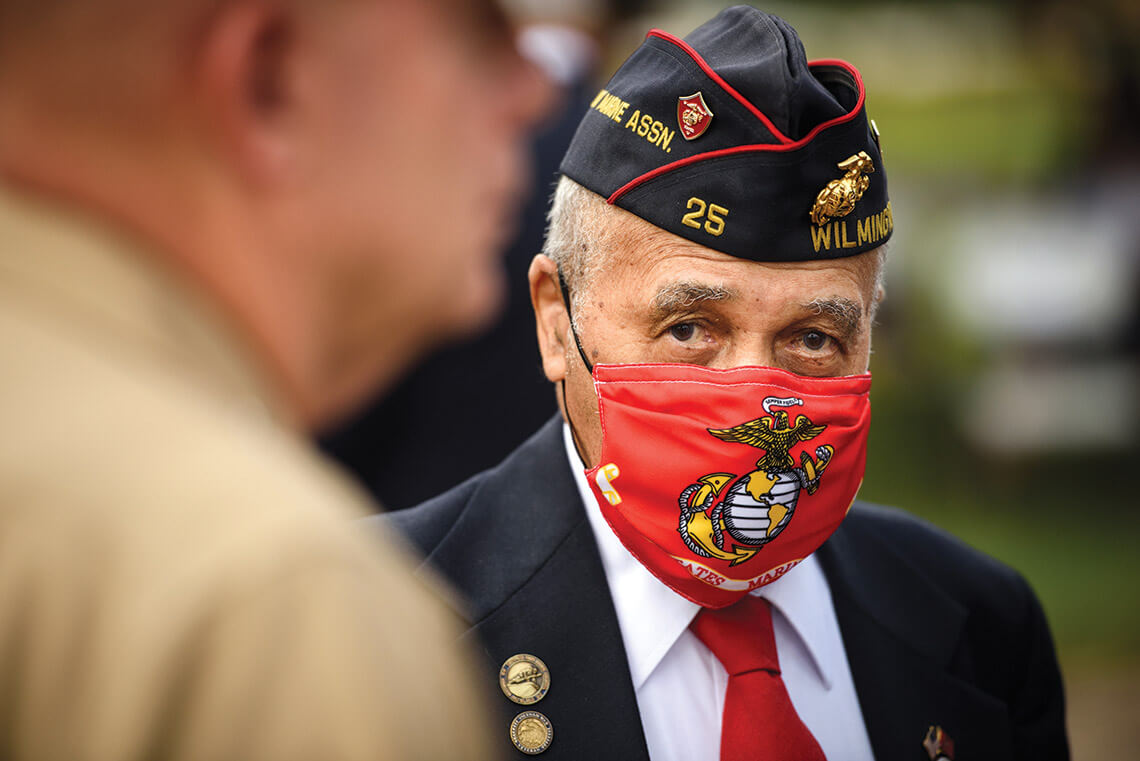 Pastor Chuck Peters enlisted in the Marines in 1965 and served in southern Iraq near the Kuwait border in 2004-05 as a battalion chaplain for all branches of the service. Among his duties on base, road missions, and convoy trips were church services, counseling, suicide prevention, and, of course, solemn funerals. “For individuals who’ve been in combat, seen fellow Marines or soldiers die,” he says, “there’s an emotional commitment that is heartbreaking. A military unit is a family, and it’s devastating to lose a family member. You’re not just losing a fellow soldier; this is a battle buddy.”

So many dead. Their names and number are legion. They died on deserts and in airplanes, in hospitals and jungles and trenches, on mountaintops and beaches. They died instantly, unknowing, or in agony, suffering. They died named and unnamed, with shoulders and breast pockets decorated or bare, and are buried in graves both marked and unmarked. And while the origins of the holiday that commemorates our national losses are obscure, it is right, and good, and necessary, that we honor and remember them with a day set aside specifically to do just that. And to keep searching.

In the era of Jim Crow, drill sergeants at Montford Point were determined that F.M. Hooper Jr. and his fellow recruits would meet and exceed the Marine standards, even if the Corps didn’t recognize them as Marines. The result was that the men performed amazingly well in battle, running ammunition behind the lines. The largest number of Black Marines to serve in combat during WWII took part in the seizure of Okinawa, with approximately 2,000 seeing action. A third monument at Lejeune Memorial Gardens is the Montford Point Marine Memorial, designed by a relative of a Montford Pointer. A bronze armed Marine scales a hill, representing the moment when the Montford Point Marines put down their ammo cans and picked up their rifles to fight alongside the white Marines. There are no names of those whose lives were lost on the nearby wall, only stars. Tragically, the Marine Corps kept no records of the 20,000 Black Marines who passed through Montford Point. Gold stars on the wall symbolize those individuals whose names are still being sought today. 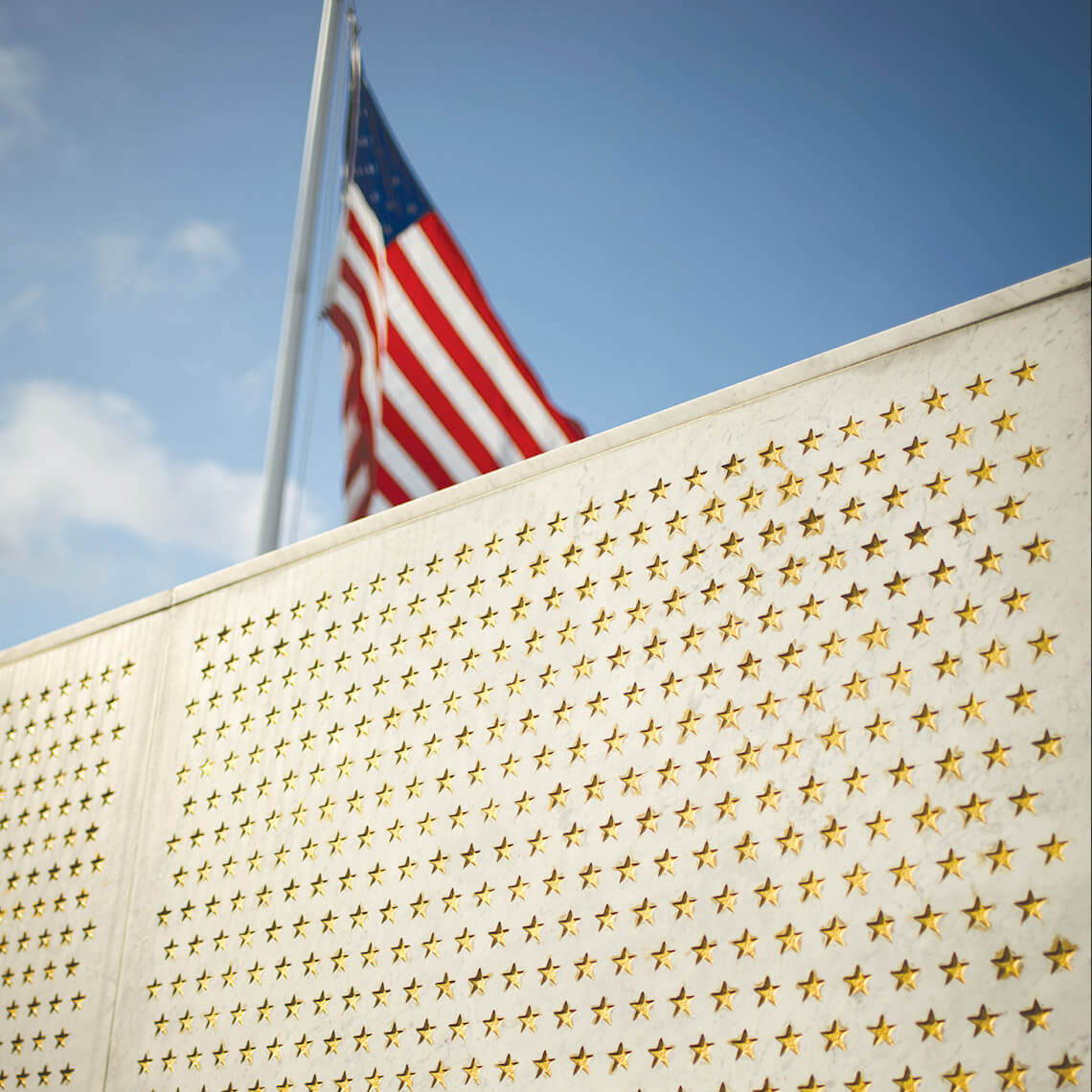 There are no names on the Montford Point Marine Memorial, only gold stars that represent the Black Marines who served during World War II. The absence of names symbolizes the fact that there is not a complete roster of Montford Point Marines. photograph by Andrew Craft

Hooper is one of the seekers. During his service, his ports of call included Europe, Turkey, the Philippines, Japan, and Vietnam. He speaks fluent Japanese. He is a member of the Order of the Long Leaf Pine and has received the Congressional Gold Medal, the nation’s highest expression of appreciation for distinguished achievement. He spends his days looking for Montford Pointers; sometimes, descendants find their great-grandfather’s military service records among his effects after his death. When Hooper finds them, if anyone finds them, they, too, will receive the Congressional Gold Medal. As long as he lives and can get there, Hooper will attend the moving celebration held at the Montford Point Marine Memorial in Jacksonville every August 26 — the day the first Black recruits arrived there in 1942. 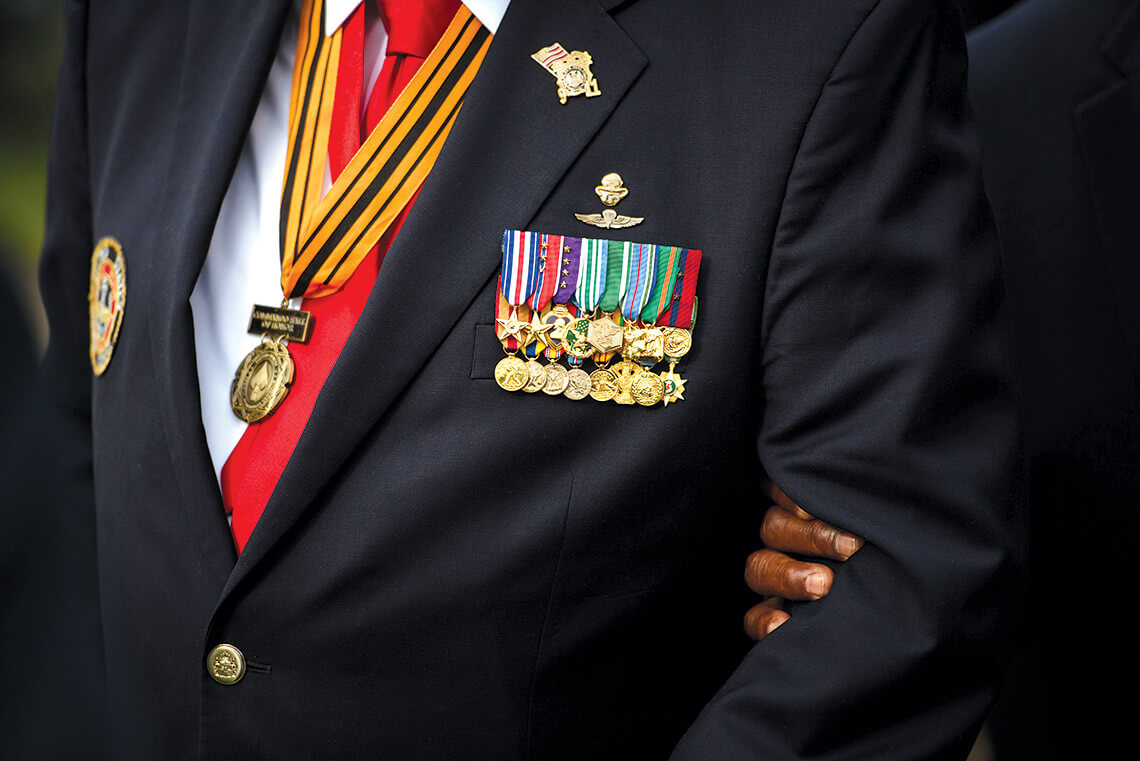 So many dead. They came, or they were called, or they followed in a family member’s footsteps. By instinct, for duty, for responsibility. And they died in the undisputedly ultimate sacrifice: For cause. For country. The lost are those for whom honor, duty, and sacrifice were not just a patriotic litany, but a reality. They deserve our gratitude, our respect, and something permanent to memorialize and remind we the living of their very impermanence: memorials. Memorials for meditation, or for inspiration; solid, solemn, formal, often imposing edifices. Memorials that yet are made so present, so human, not only by the names inscribed or engraved or chiseled on marble or granite or bronze, but also by the personal touches left behind that express an ongoing grief: berets and flags, a teddy bear or locket or single photo encased in plastic.

So many dead. Whether you salute, cover your heart with your hand, or simply stand silently, respectfully, gratefully, this and every Memorial Day, recognize their service, decorate their graves. Honor their patriotism, toast their memories, preserve their pasts.