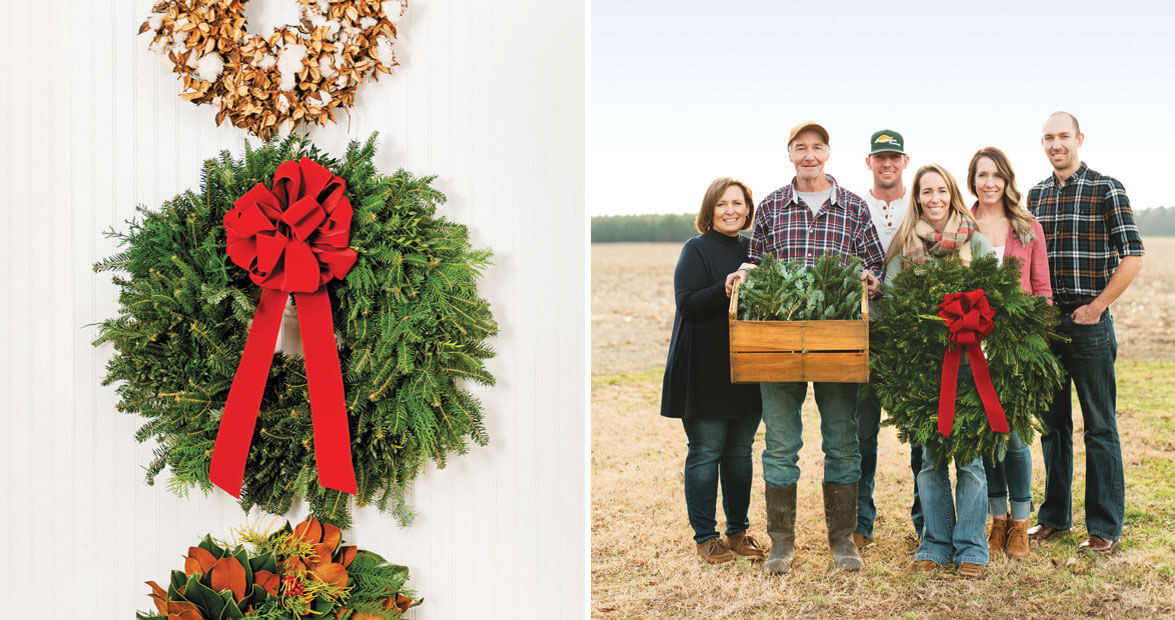 If Christmas has a smell, it can be found in the wreath-making room at Sanderson Wreaths. In this wooden building on a farm in Wayne County, the fragrance isn’t the Johnny One-Note Yankee Candle kind. It’s the rich, deep aroma of Fraser fir, fresh magnolia, corn husks, cotton burrs, and cedar. It’s fall and winter, earth and frost, wood and needle.

It’s also really loud. Kari Sanderson Hobbs is using a clattering automatic garland machine, a wooden spool that binds bursting fronds of greenery into a slightly more manageable 125 feet of fresh holiday trim. Kari’s brother Josh usually helms the contraption, but during this busiest time of the year, everyone pitches in where they’re needed.

Call that a nonchalant business approach or call it common sense, but it’s been working for more than 30 years. Kari’s parents, Kenneth and Vickey, started the operation in the early 1980s as a choose-and-cut Christmas tree business that they hoped would create a nest egg for their family. “My husband and I wanted to plan for our children’s futures,” Vickey says. “I really thought we’d just work at it hard enough for them to be secure. I didn’t think we’d be doing it 35 years later!”

“It’s not just work. It’s Christmas. You feel it all over.”

But as the market for Christmas trees and decorations grew, the couple saw an opportunity to expand. They moved away from the tree-selling business in the 1990s and focused exclusively on Christmas trimmings. Those have expanded, too: Some handmade wreaths now span several feet across. They burst with berries, cotton bolls from the family farm, and eight varieties of greenery, from eucalyptus to cedar.

“After we had picked cotton one year, I went out into the field,” Vickey says. “The little burrs were so pretty. I just thought, There has to be a way to do something with it.”

The Sandersons sell seasonal garlands and wreaths in November and December, plus a host of other creations — billowy cotton boll wreaths and starkly beautiful cotton burr ones — throughout the year at the State Farmers Market in Raleigh. The family recently opened a small store adjacent to their wreath workshop, where farmhouse-style trinkets sit alongside Kari’s cotton bouquets and hand-tied bows.

On weekend nights during the busy holiday season, the Sandersons light the firepit, and visitors toast marshmallows outside. Santa always drops by on opening night, and there’s a barrel train for the kids to ride. “It’s just plain, simple, homegrown country,” Vickey says. “This whole community is just tied together.”

It’s a community effort to make it all happen, of course. The farm hires 10 to 15 people each winter just to help with the wreaths. Many of them are familiar faces. “Most people here are neighbors or family,” Kari says.

Today, the business that was supposed to provide for the kids has turned into a tradition that the family intends to carry forward. “I hope I can continue to do the same thing and send my children to college doing this, too,” Kari says.

It won’t be easy. Each year, the pace is exhausting in the short weeks leading up to the holidays. But with family and neighbors in and out of the workshop, and the smell of evergreen as magical as ever, Vickey says that even after all these decades, it’s still fun. “It’s not just work,” she says. “It’s Christmas. You feel it all over.”