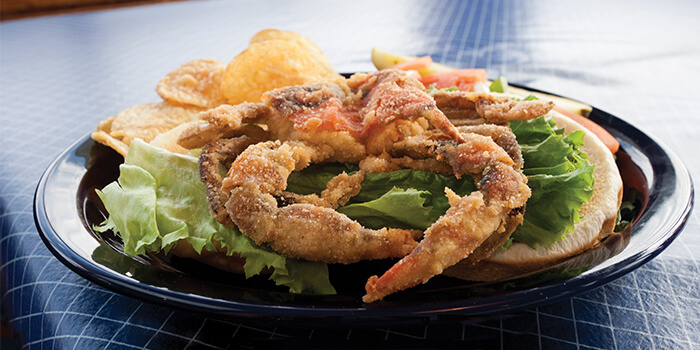 A not-so-flattering photo exists from my first visit to the Sanitary Fish Market and Restaurant in Morehead City six years ago. It looks like one of those joke photos tourists take on vacation, pretending to pick Lincoln’s nose at Mount Rushmore.

In this one, I’m holding a soft-shell crab sandwich that has brown, spindly legs dangling out of the sides. My mouth is open like the shark in Jaws. The marlin above my head is thinking, “Take a bite. I dare ya.”

The thing is, this was the second photo. In the first one, my eyes were shut. Who could blame me? It looks like a giant fried spider on a bun.

Most North Carolina seafood restaurants have a version of a soft-shell sandwich, but eating one at the Sanitary, sitting in one of the four “decks” surrounded by nets, buoys, and other ocean paraphernalia, makes it special. You become one of the folks who’ve been eating here since 1938. Six years after that first visit, I’m sitting at the bar that was built by a boatbuilder, waiting on another sandwich.

When novices order the Sanitary’s sandwich, what comes on — and over the edge of — the plate can be a bit of a surprise: the legs.

Eating a crab usually means cracking open some plump legs, dipping the meat in melted butter, and tossing the detritus into a bowl. The best part is the claw, which should be saved for last. Eating crab is messy, and it’s work. A crab sandwich usually means lump crab, or (gasp) imitation crab, mixed into some sort of salad concoction or deep-fried into a puck.

With a soft-shell, there’s no imitating, and no waste. You’re eating a crab, the whole crab — minus a few parts like the eyes, mouth, and gills — and nothing but the crab.

“With hard crabs, you have to boil them and crack them,” says James Scott, the Sanitary’s chef. “You don’t get a lot of enjoyment. With soft-shell, you get different textures and flavors. They’re a little treasure from the ocean.”

The Sanitary soft-shell crab sandwich is precious, indeed. The delicacy isn’t even included on the menu; rather, it’s the star on something of a secret menu, whose items Scott makes upon request. But there are tourists who, like me, don’t live near the ocean and want to try something new and different.

“Some order it thinking they’re getting a regular crab in a hard shell,” says Linda Travis, a server who’s in her 14th season at the Sanitary. “I ask, ‘Have you ever had soft-shell before?’ I tell them they eat the whole thing and they get freaked out.”

Locals love them. OK, not all the locals. Sanitary bookkeeper Renee Tunnell Morris, daughter of the Sanitary’s resident storyteller, John Tunnell (who’s been working there for 71 years), doesn’t like soft-shell crab sandwiches for the same reason fans of the sandwich are attracted to them. “It’s the legs and the texture,” she says. 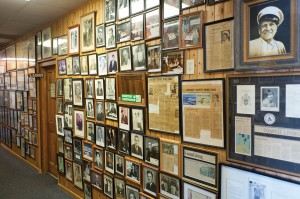 Soft-shell crabs can be grilled, but Scott prefers to dry off the crabs, add a little cornstarch to the seasoning, and fry them. “Cornstarch makes the crab plump up, and helps get that crisp feature,” Scott says. He even leaves some of the tougher skin on top for extra crunch. “I’m using Old Bay Seasoning,” Scott says. “Classic ingredients and seasonings people are used to. I try not to shock them. I just give them something good. Comfort food.” Albeit an eight-legged comfort food.

And it’s that very splay of legs and the crab’s resemblance to a spider that some people can’t get past. Granted, I’ve never eaten a spider, but I imagine that they have a similar crunch to that of soft-shell crabs.

I hail from Ohio, where exotic stuff like seafood isn’t common fare. Now I head for the beach, and the nearest soft-shell crab, by myself if need be, as my husband won’t eat them.

I stare at my plate, the marlin overhead still taunting me, the sandwich-with-legs still looking as though it might take off any minute. Despite selling the occasional soft-shell crab sandwich, Scott says adventurous eaters don’t flock to the Sanitary. Pretty much the same people have been coming here to eat fried fish and hush puppies for the past 50 years. This is a place people come back to — even when they’re far away. They take pictures of themselves wearing the famous, brightly colored Sanitary T-shirt at the Great Wall of China, or the Eiffel Tower. And when they see someone else wearing one, there’s the knowing glance: We’ve been there, too. How about those hush puppies?

When I had my first soft-shell crab sandwich, I closed my eyes and took a bite, and there was that crunch Scott describes. There’s no crunch like it, the ocean’s fried-up version of phyllo. Drop that eight-legged arthropod on a bun with lettuce, tomato, and Scott’s rémoulade, and — claws and all — I’m hooked. Take another picture.