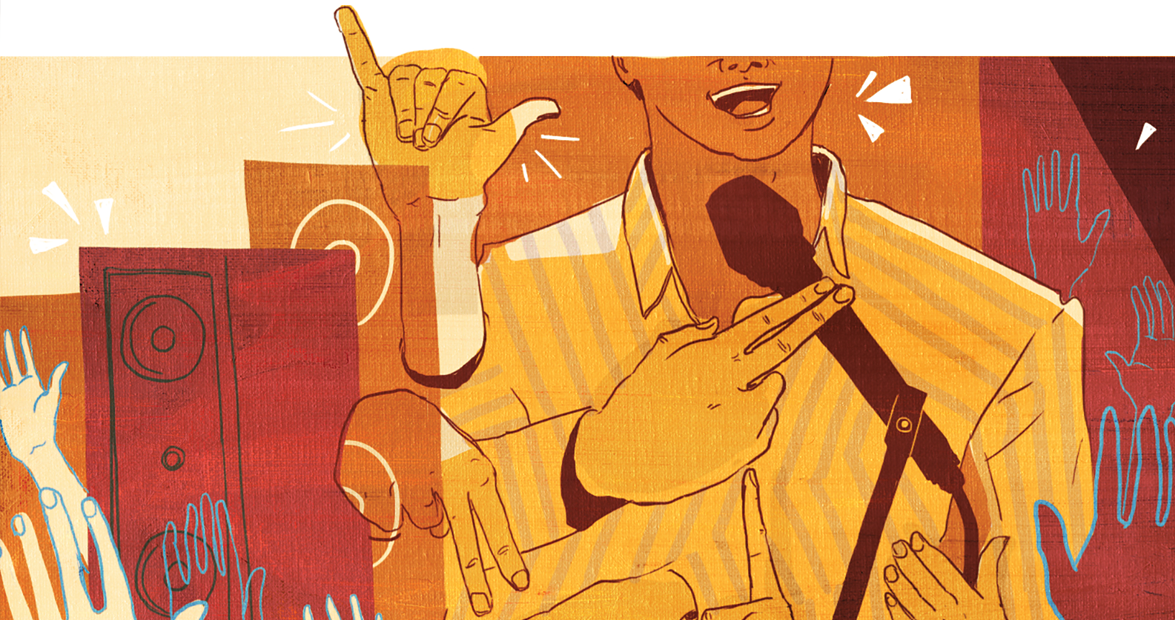 David Litman’s hands are in continuous motion. His fingers dip, thumbs twitch. He points and raises and swipes his hands through the air. His hands dance to an unheard beat. His hands sing.

Like almost 1.2 million North Carolinians, Litman is deaf. But although he’s lost his hearing, he has not lost his love of music.

One of the Greensboro resident’s favorite hobbies is karaoke.

“At first, I was apprehensive about singing,” he says. “I have no musical talent — this includes not being able to carry or even know what a tune looks like. But it dawned on me: ‘Hey, nobody can hear how bad my voice is anyway, so why not?’ ”

He first experienced karaoke in 1998, at an Association for Late Deafened Adults convention in Chicago. Four hours of singing, signing, and dancing later, Litman was hooked.

Now, he happily jumps on stage to perform his favorites: “Tiny Dancer,” “Hotel California,” and “Paradise by the Dashboard Light.”

Litman grew up “living an unremarkable hearing life,” he says, but that changed when he was 24, when doctors discovered growths on the hearing nerves in both of his ears.

Surgeons tried to save Litman’s hearing, but after a second operation — he went in listening to The Phantom of the Opera — he came out fully deaf. Since then, he’s devoted himself to helping others with hearing loss and is now the Hard of Hearing Specialist for the North Carolina Division of Services for the Deaf and Hard of Hearing. Part of his job is making things hearers take for granted, like music, more accessible for the hearing impaired.

With so many in North Carolina with hearing loss, the chances of seeing a signer at your local karaoke bar are pretty good.

“While I am fully deaf, I am also fully full with life,” Litman says.

So are his hands.