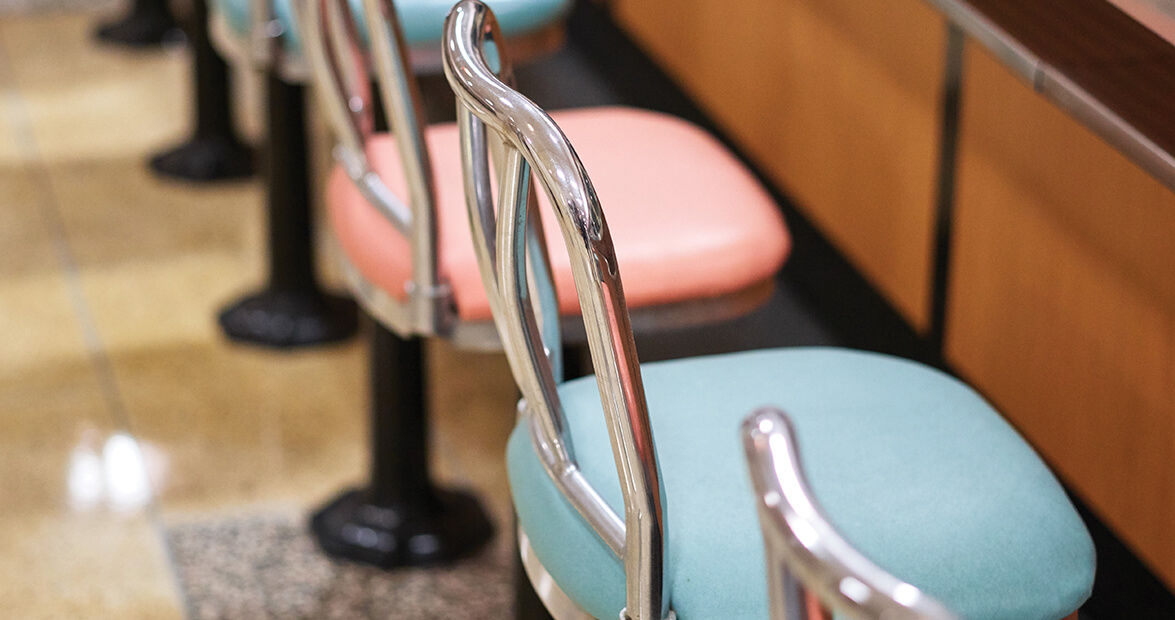 1960: The civil rights sit-in at Woolworth’s inspires change. This historic date is included in our 50 Moments that Made NC.

It’s their courage that still amazes Phil Freelon. They were all freshmen, barely into their second semester of college. Franklin McCain, at 19, was the oldest and, at 6 feet 4 inches, the most physically imposing of the crew. Ezell Blair Jr. and David Richmond were a year younger. And Joseph McNeil wasn’t even 18 on that day — February 1, 1960 — when the four students from North Carolina A&T State University walked into F.W. Woolworth’s in downtown Greensboro; bought some toothpaste, paper, and colored pencils; and then sat down at the lunch counter. Although blacks were allowed to shop at the store, food service was whites-only, and they were duly refused. The quartet quietly and politely declared their intention to stay, and they (and student reinforcements) continued to wait. And wait.

For six months, they waited at that lunch counter.

“When you think about these people as 18-, 19-year-old kids, to go out there and take that kind of risk, not only jeopardizing their future, possibly, and their education, but physically, they could have been hurt — it’s just amazing,” says Durham-based architect Freelon, the architect of record for the new, internationally acclaimed Smithsonian National Museum of African American History and Culture (NMAAHC). Among the museum’s thousands of artifacts and hundreds of exhibits are two simple stools from that Woolworth’s lunch counter. Sitting in one of the vinyl seats, leaning back against the cool, polished chrome, a tall man’s legs would have touched the floor. Made, like so many just like them, at a hardware foundry in Chicago, the stools are utterly ordinary, yet completely extraordinary. Their invisible history is what visitors see when they stand before them now.

Freelon was just 7 at the time of the sit-in, but his career continues to intersect with the Greensboro Four. A decade ago, he designed the International Civil Rights Center & Museum in Greensboro, which occupies the old Woolworth’s where the sit-in took place. When he walked through the then long-abandoned building for the first time, he was filled with emotion. “The ghosts of the past were still in the air. The ambience of the place still had a heavy feel to it,” he recalls. “It was dark and musty, and things were covered with dust. In your mind, you kind of flash back and imagine a bustling downtown Greensboro, with people moving in and out of the five-and-dime, but if you’re thirsty or hungry, you’re not allowed to partake.”

The four teenagers did a great deal more than integrate lunch counters in downtown Greensboro over those winter, spring, and summer months. During the course of their demonstration, they transformed the sit-in into the signature tactic of the civil rights movement.

The idea of patiently demanding service wasn’t novel. Since the late ’30s, sit-ins had been used to protest segregation with little success, including in Durham in 1957 at the Royal Ice Cream parlor. In the months before the Greensboro sit-in, students were training for nonviolent direct action across the South. But the A&T students acted independently, inspired by exemplars from Toussaint L’Ouverture to Ralph Bunche and goaded into courage by each other’s dares.

They weren’t alone for long. By the second day, classmates had joined them, as did students from Bennett College and Woman’s College of the University of North Carolina (now UNC Greensboro). The A&T football team, calling itself the “Union Army,” helped usher in new shifts of protesters. Woolworth’s finally gave in on July 25. By then, successful sit-ins, many led by students from other historically black colleges, had integrated lunch counters across the South and inspired student-led civil rights groups nationwide. 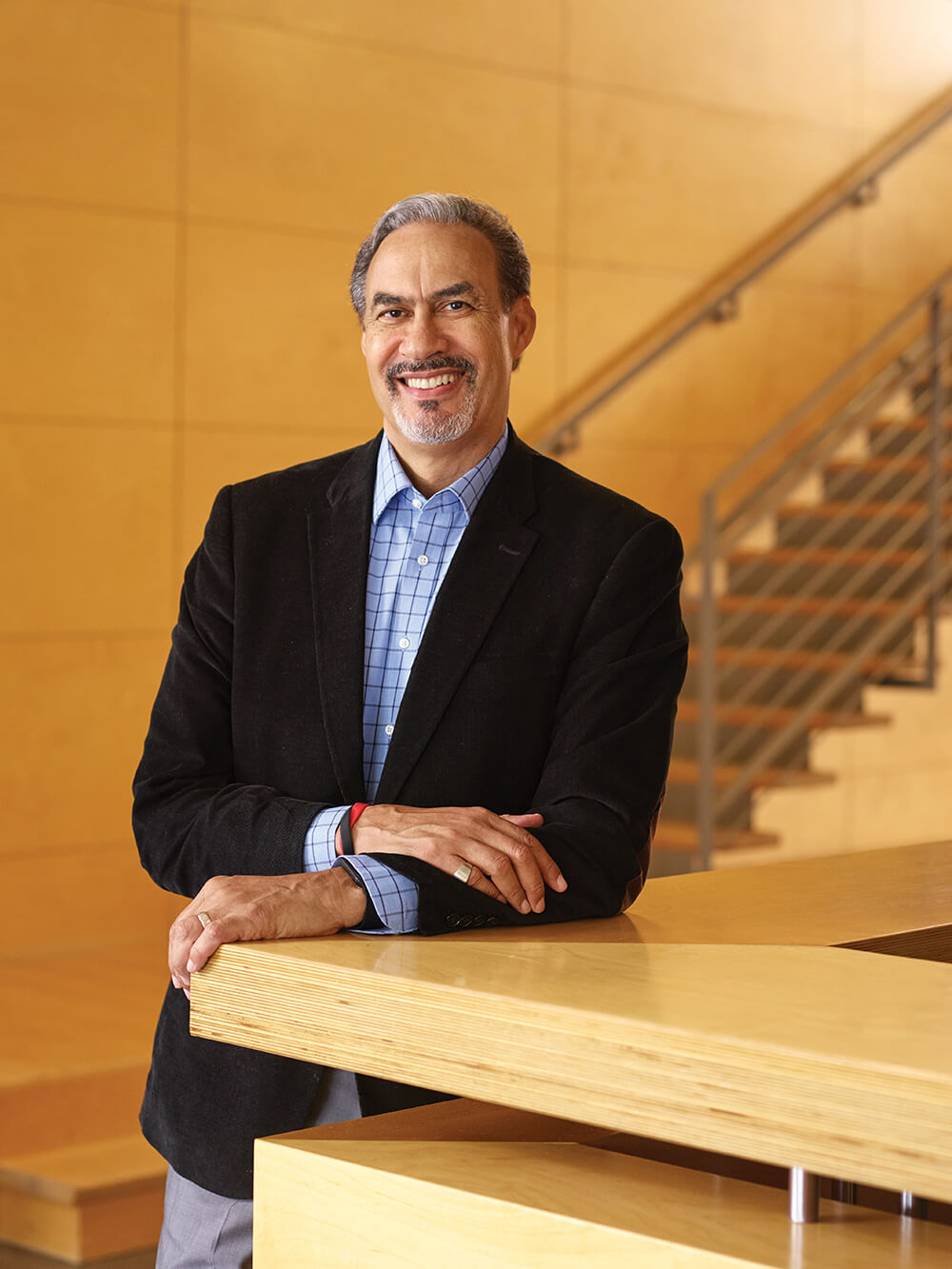 In those volatile, heady times, Freelon was growing up in Philadelphia, the grandson of a pioneering African-American Impressionist painter, Allan Freelon Sr. His parents were socially engaged, and politics was a common topic at the dinner table. As a teenager, he followed the movement closely, “not in a pounding-the-table, raising-fists kind of way,” he says, but he studied black themes and authors in his classes, and designed covers for his high school’s African-American newspaper. He ventured south for college, to Virginia’s Hampton University, where his architecture professors encouraged their star student to transfer to a larger program. And so, in 1973, Freelon came to North Carolina for the first time, to attend North Carolina State University. It would set the course of his life, in many ways.

“I was apprehensive,” he says of the move to his now home state. “I associated North Carolina with the Deep South.” He recalled driving past an infamous billboard in Smithfield with a hooded Klansman atop a horse, brandishing a burning cross. As he got to know the state better, his view changed, and though he left for Houston at the start of his architecture career, Freelon and his wife, Nnenna, soon returned to the Research Triangle to start their family. “Obviously I was impressed,” he says. “I’ve left and come back a couple of times, but decided to start my family and my business here.”

Freelon’s work is often rigorously geometric, but intricate patterns and lots of glass also give his buildings a lightness and openness that keep them from coming off as forbidding and cold. In that way, they seem to reflect their designer, a distinguished man with salt-and-pepper hair and an air of analytical calm. He now uses a cane, following a 2016 diagnosis of ALS.

But Freelon’s natural reserve gives way to excitement when he speaks about meeting the three surviving members of the Greensboro Four at the museum’s groundbreaking. “It was awesome,” he says. “When you see them in their teens, and then they’re in their 60s or 70s, it’s strange. But when they were together, they did something that will be commemorated in history forever.” 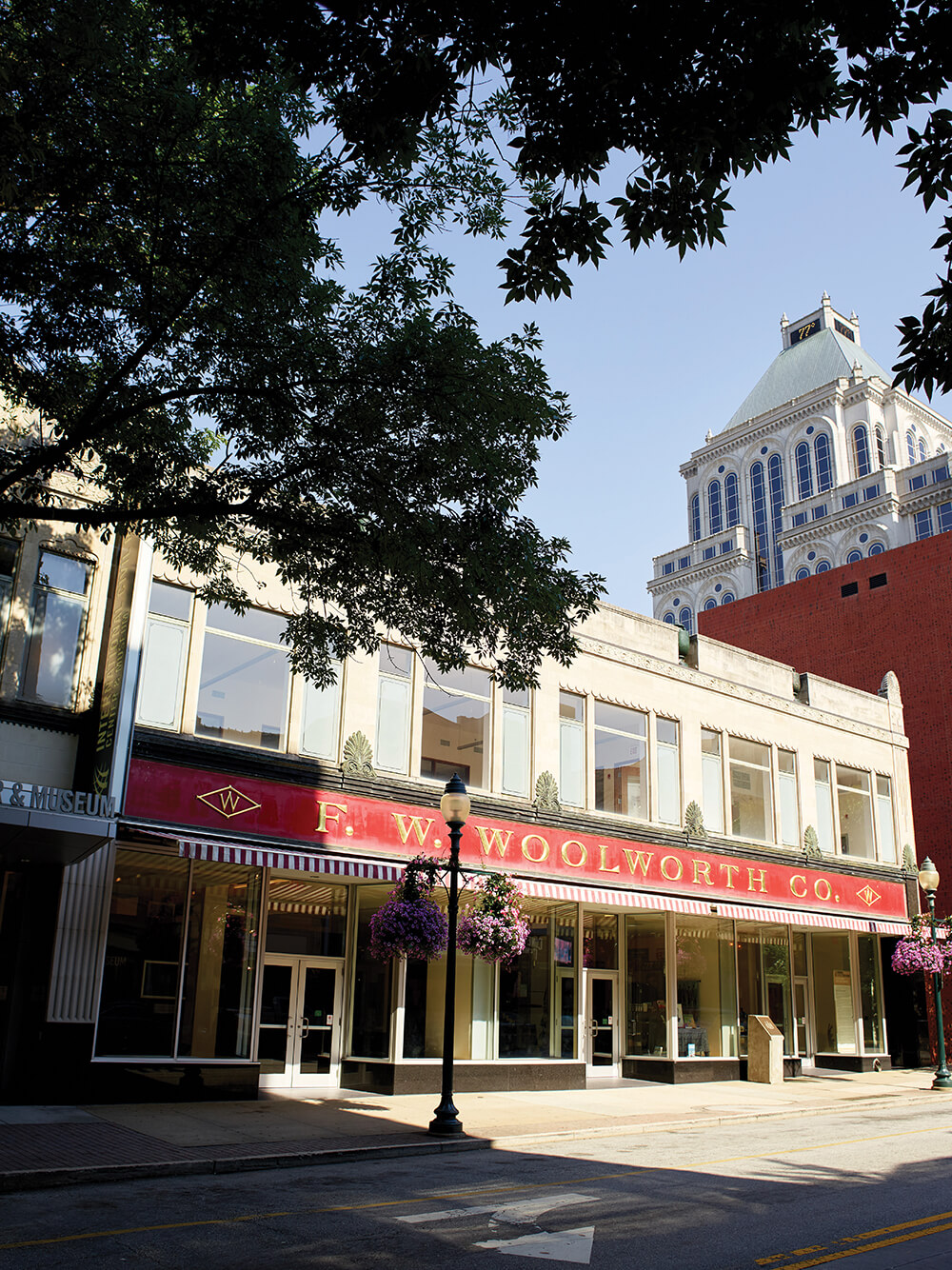 The F.W. Woolworth building in Greensboro, which is now a civil rights movement museum. photograph by Joey Seawell

Freelon’s museums in Greensboro and Washington, D.C., and in Detroit, where he’s completing the highly anticipated expansion of the Motown Museum, are all designed to foster meaningful interactions with the past. “Engaging people with more than just a visual representation on a book or on a computer — we know scientifically, when you can do that, the experiences and the learning are deeper,” he says.

Visitors to the new Smithsonian can’t sit on the old Woolworth’s stools, of course, but other displays encourage interaction. “You can move into a slave cabin. The Tuskegee Airmen aircraft is right there, hanging over your head,” Freelon says, a sense of wonder creeping into his voice. “There’s a segregation-era Pullman rail car. You can walk through that thing and see, OK, here’s where some people sit, and here’s where others sit.”

The music section of the Smithsonian NMAAHC, which features artifacts from home- state greats George Clinton and James Brown, is meaningful to Freelon in a different way. His wife is a Grammy-nominated jazz singer, and their son Pierce is an activist and hip-hop musician who’s running for mayor of Durham. (Their daughter Maya Freelon Asante is a visual artist, and their other son, Deen, is an associate professor at UNC Chapel Hill.) As a superfan of the Godfather of Soul, Freelon is quick to note that the Brown exhibit is on the museum’s top floor — part of a plan to walk visitors from the building’s subterranean history galleries gradually upward to the culture displays, which crown the edifice.

The two Woolworth’s stools are on the second concourse, in the middle of the historical section, not far from a dress sewn by Rosa Parks and a pen Lyndon Johnson used to sign the Civil Rights Act of 1964. Which four stools Blair, McCain, McNeil, and Richmond sat on that fateful day is lost to history. The lunch counter had 65 seats, meaning several museums can boast the original spot where the Greensboro Four sat, and Freelon is fine with that. “There’s no way to tell now!” Freelon says with a laugh. “It’s nice to be able to have it in three, four, five places. It’s all good.”

Freelon knows well the power of being near such a meaningful historical object. Even after designing an entire museum around the old Woolworth’s, he found that when he saw the stools again, in the new building in D.C., he felt the same electricity. “It’s a memory that gets triggered back to the first time I walked into that dingy area of the building, before it was renovated,” he says. “History is a funny thing. There can be poignant moments embedded in these objects.”