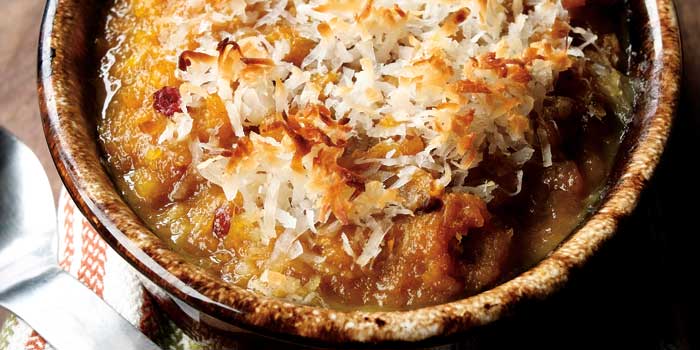 Doris Petteway wasn’t trying to kill her daddy. She just wanted to surprise him with a good meal while her mother was away caring for Petteway’s ailing grandmother. And it would have been a sweet gesture if Petteway, who was 12 at the time, hadn’t confused the tulip bulbs her mother stored in the pantry for onions and sliced them into the gravy.

“Mother was not at all concerned that we would be sick from the poisonous bulbs,” Petteway later wrote, “but only that she had lost them.”

The good news is that nobody died or got sick. And seven decades later, Queen Street Church in Kinston turned the story of longtime member Doris Petteway’s brush with murder into the title for its recently published cookbook, Potato Salad, Pimento Cheese, and How Doris Almost Killed Her Daddy.

Petteway, cherished by her fellow members for her excellent cooking and great storytelling, died this year at age 82, but not before she saw the cookbook with her photo on the cover and her story published on page 1.

Since Our State first asked readers to share their cookbooks with us, we’ve received about 200 volumes. Whether they’re from churches, community groups, individuals, or businesses, they all make us hungry with their delicious recipes — such as the butternut squash souffle in the Queen Street Church cookbook. But a handful of books caught our eye with unexpected titles.

“There are hundreds of cookbooks out there,” Bette Fulghum of St. Pauls says. “Why would you pull mine off the shelf?”

Because the book’s name is Lizards for Dinner and Other Good Stuff. Fulghum, who published the cookbook for her children and grandchildren, got her title from her daughter’s first year in school. As Fulghum picked up her daughter one day, the teacher said, “We’re curious about what you had for dinner last night.” Fulghum’s daughter told everyone she had lizards for dinner.

What Fulghum actually served was a family favorite — livers and gizzards — which her children, now adults, still refer to as lizards.

Elizabeth Tucker Vasgaard’s family knew a cookbook honoring her memory had to have a sense of humor. Throughout her life, Vasgaard delighted family and friends with her funny stories and delicious baking.

“Mom was everyone’s favorite cook and entertainer,” Vasgaard’s daughter Vicki Bowman wrote in the letter she sent in with the family cookbook.

For the title, Lord, Ain’t the Gravy Good, the family recalled a favorite poem Vasgaard recited before every Thanksgiving dinner for 70 years: “I don’t like your bread/ Your chicken is old/ Your beans need baking/ Your cabbage is cold/ Your pastry needs a hammer/ That’s understood/ But Lord, ain’t the gravy good!”

“The cookbook is a tribute to Mom and Dad,” Bowman says, “and to the fun meals we shared as a family around the dining room table.”

The funny titles worked on us — they made us take a closer look. And the stories behind them made us glad that we did.

Diane Summerville is a writer and editor living in Greensboro.