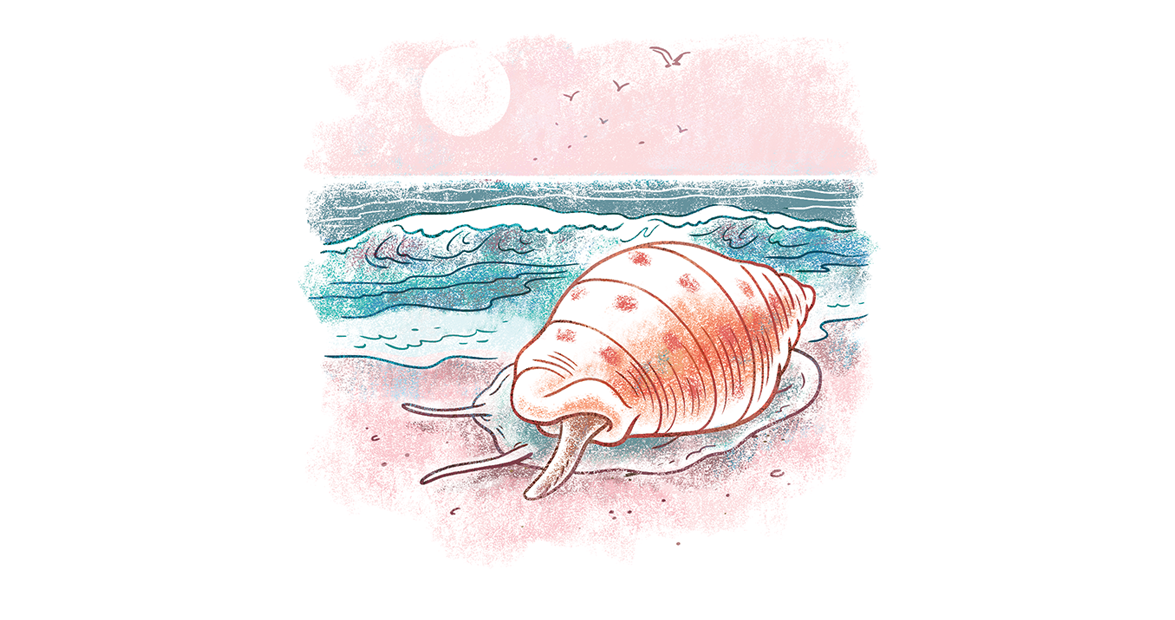 In 1965, the North Carolina General Assembly passed a simple, seemingly whimsical piece of legislation. That spring, with the Vietnam War worsening by the minute, the riots in Los Angeles on the horizon, and the march Dr. Martin Luther King Jr. led from Selma to Montgomery, Alabama, just days before, North Carolina chose an official state shell: the Scotch bonnet.

The session in which the legislature selected the state shell was apparently quite long — there were a lot of competing shells, and there was considerable controversy. Many members felt that a state shell shouldn’t be so elusive and hard to find. It should be spread about liberally on the beaches of North Carolina, they said, and it shouldn’t be so fragile. Moncie Daniels, the state representative who proposed the Scotch bonnet — pronounced “bonay” — was prepared to offer a Scotch bonnet shell to everyone who voted for it. But he could only find two, and they were broken. Still, over the course of many hours, the Scotch bonnet, a species of the sea snail, prevailed over the ear snail shell, false cerith shell, the prickly winkle shell, and the hairy shell (which I’m glad didn’t win).

Darwin’s dilemma
The legislature’s state shell debate wasn’t the first time the snail was at the center of a controversy. Over 100 years earlier, in 1855, before his theory of evolution was widely publicized, Charles Darwin was perplexed by this shell. Other pieces of evidence regarding natural selection — finches, cabbages, beetles, turtles — were more straightforward, but the snails bedeviled him: “One of the subjects on which I have been experimentising & which cost me much trouble, is the means of distribution of all organic beings found on oceanic islands … Land-Molluscs are a great perplexity to me.”

Darwin’s ideas on evolution were forming as early as the 1830s, but his On the Origin of the Species (in which our state shell is featured prominently) would not be published until 1859. To understand this long delay, it’s important to understand Darwin’s very loving marriage to his cousin, Emma. She was a religious woman, and she loved Darwin deeply, even as these radical ideas about evolution percolated her quiet, introverted husband. Her main worry was that he wouldn’t reside with her in paradise if he carried on with these ideas. “Everything that concerns you concerns me,” she wrote to him, “and I should be most unhappy if I thought we did not belong to each other forever.”

For 30 years, he let the subject surround them gradually, and his waiting itself was kind of a quiet man’s love letter. On a note from his wife about natural selection, he wrote, “When I am dead, know that many times, I have kissed and cried over this.”

Our connection to the ocean
My parents, my sister, and I visited Wrightsville Beach  in 1996, all of us staying at the Blockade Runner. I say visiting, but in fact I was interviewing for a job in the English Department at the University of North Carolina Wilmington, and my family came along for the trip. It was one of a handful of times I’d been to the shore, and it was definitely the first time I’d slept within earshot of the ocean. I’d brought a book with me that I read deep into the night: At the Water’s Edge, in which Carl Zimmer describes the movement of mammals, from sea to land and back to the sea again, as our species’ greatest, most dramatic journey.

One evening,  after another day of interviewing, I joined my family at the beach. As we walked the distance between the Oceanic restaurant and the seawall,  we encountered a line of dolphins. All of us gasped, and one of us — I can’t remember who, maybe me — actually shouted out across the waves, which, as Melville wrote in Moby-Dick, is inevitable when mammals on a beach encounter their counterparts leaping out of the ocean.

I got the job, and I’m still taking that same walk from the Oceanic to the seawall for maybe the thousandth time. I scan the sand for shells, pausing to stare out across the sea, transfixed by the sight of dolphins rising out of the waves, cousins on a different path through existence, a road less traveled. I’m reminded of Darwin’s obsession with evolution and those snails. It might be that the Scotch bonnet isn’t a whimsical choice at all, but a durable and profound symbol for a state that has embraced and absorbed all manner of different viewpoints: North and South, creation and evolution, Democratic and Republican. A state where the seemingly simple is, in reality, quite profound.