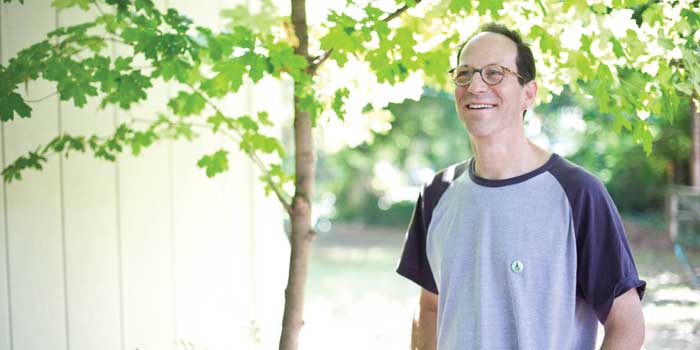 When you look at the books by nonfiction writer Scott Huler, you wonder if this guy ever focuses for more than a second.

Topics in the Huler oeuvre, so far: Cleveland Browns fans; NASCAR; the Beaufort wind-measurement scale; the legendary route of Odysseus; and, most recently, city infrastructure. You might have read his work in The New York Times or The Washington Post, or heard it on NPR. In his spare time, Huler hikes. He hiked 450 miles of the Appalachian Trail — and wrote about it.

Try to mark Huler with a rubber stamp, and it’ll bounce right off. Then he’ll ask why you have that big rubber stamp in your hand and start taking notes. Huler’s writing topics grow out of personal curiosity. And that continuous desire to learn led to his position as the 2011 Piedmont Laureate, a program created by local arts councils to promote awareness and appreciation of literary arts in the Piedmont.

“Scott looks at what I might call mundane parts of our existence and makes them fascinating,” says Eleanor Oakley, president and CEO of the United Arts Council of Raleigh and Wake County. “I think he’s very curious about his surroundings and the world he lives in, and that manifests itself in a fascinating array of writing.”

Huler, 52, was born in Cleveland, Ohio, and graduated from Washington University in St. Louis, Missouri. He moved to Raleigh in 1992 to work as a feature writer for The News & Observer. He left the newspaper in 1997 to write books and left Raleigh in 1999 to follow his future wife, novelist June Spence. Both returned in 2003 after Huler finished a journalism fellowship in Ann Arbor, Michigan.

No Southern pillar is safe from the Huler wit. Take the legendary Southern propensity for storytelling. “Everyone says, ‘Oh, we Southerners love our stories,’ like it’s some Southern thing,” Huler says. “Well, I grew up in Cleveland, Ohio, and my grandfather came over from Poland, and he would tell stories about that all the time. Why is storytelling so much identified with the South?”

Huler’s newest book, On the Grid: A Plot of Land, an Average Neighborhood, and the Systems That Make our World Work, started with questions that arose in his mind during a drought in Raleigh, where he lives. Those questions led Huler to explore water pipes, garbage collection, and the other fraying petticoats that hold up the fancy dress of civilization.

Bland Simpson came to know Huler when Spence taught creative writing at the University of North Carolina at Chapel Hill. Simpson, professor of English and creative writing at UNC, asked Huler to teach a class on creative nonfiction in 2007. He knew Huler would be great in the teaching aspect of the Piedmont Laureate position and wrote a recommendation.

“He’s like the early gang of new journalists, like Tom Wolfe and John McPhee.” Simpson says. “Some nonfiction writers stay more in one territory, and I’m probably one of those. Scott is very much in the great American, top-notch, nonfiction-writing cadre.”

One day several years ago, Simpson asked Huler about his toddler son. Toddlers exhaust parents. But there’s the average exhausted, then there’s the Scott Huler version. “He said, ‘It’s like a whole day is a baseball game, and June and I, when we get to about 9 o’clock, we look at the score, and it’s Louis 39, and Scott and June 4. We’ve exhausted our first-string, and we don’t have any more fresh players, but Louis still has his starting lineup out there, and we know there’s no way we can pull this one out,’ ” Simpson says.

Huler believes that his greatest accomplishment will be if his sons, now 6½ and 3, become as curious about life as he is. And the same goes for his goals as Piedmont Laureate.

“People are so passive about their information habits,” Huler says. “They should be much more active. Ask questions. Look around you. Think, ‘Wow, that’s interesting. I want to know more about that.’ ”

Words on the Move

As a writer, Scott Huler believes his most important job is getting people to ask questions. Words on the Move, Huler’s project to raise awareness and appreciation for writers and the act of writing in the Triangle, spreads his constant curiosity to the community via the public bus system. In Raleigh and Chapel Hill, placards on the inside of buses grab riders’ attention with a simple, “Hey,” followed by a list of rapid-fire questions that are sure to make anyone’s commute a little more thought-provoking.

Hey,
Where did this bus start? • Where does it go? • How long does it take? • How many stops does it make? • What would it cost you if you drove?

Hey,
What are you reading? • When was the last time you read a book for pleasure? • Do you read more online or offline? • Who gets paid if you buy a book for an e-reader? How? • If a bookstore sells more coffee than books, should it change its name?

Debbie Moose is a freelance writer in Raleigh and the author of four cookbooks. Her work has appeared in a number of publications, and she has a blog at debbiemoose.com.