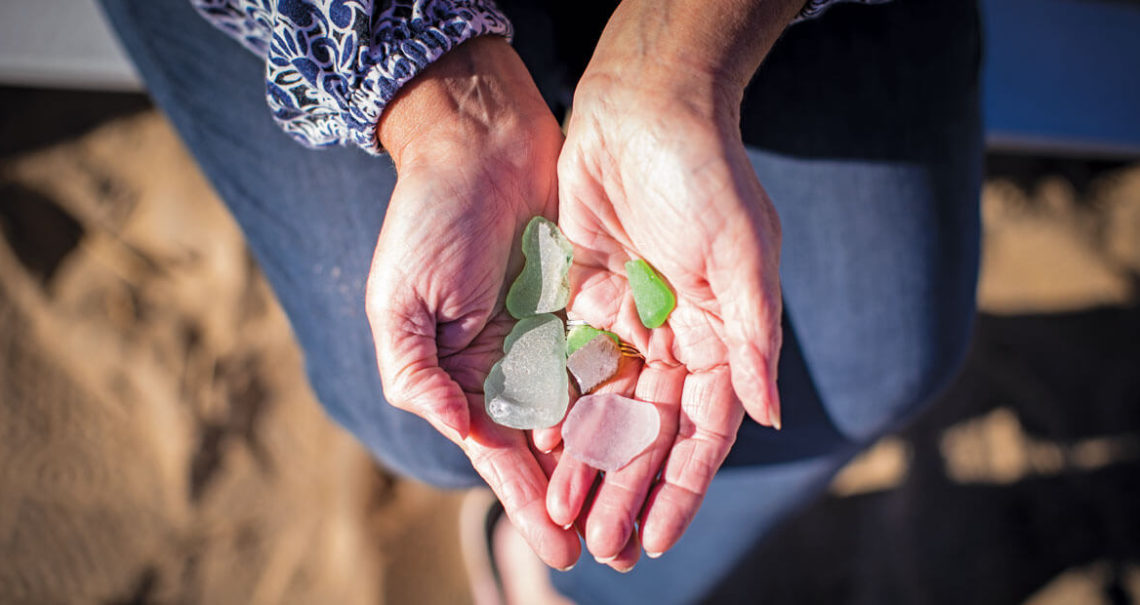 The first thing my 19-year-old daughter, Aliya, does, after settling into my passenger seat and slinging her backpack into the rear, is switch off my podcast and turn up her music. My lesson on compassion cuts off mid-sentence, replaced by heavy bass and lyrics that make me cringe. There is turbulence between us. She’s hurtling into adulthood; I’m tumbling into middle age. We keep colliding. I turn my car away from her college dorm toward the coast. We’re going to the Outer Banks for the weekend to search for sea glass — and also, I hope, to smooth out some rough edges between us.

There’s no telling what we’ll find at the beach on this chilly February weekend. The Outer Banks can be an ideal or terrible place to find sea glass, depending on the season. Local collector and jeweler Pembroke Bryant, who has spent decades combing these beaches for treasure, once kept records on tides, wind, and moon cycles when collecting in his early years. But he gave up trying to crack the code of sea-glass hunting long ago. All he knows for certain is that the odds are better during the off-season, on barren beaches. “If you see footprints in the sand, the sea glass is probably gone,” he says.

These cold, gray days should bring us luck.

On the Outer Banks, where hurricanes have long washed everything into the sea, debris from storms — the broken dishware and bottles and windowpanes — is delivered back to the sand as sea glass. After storm surges, the little gleaming shards sometimes spill from the berms built in the 1930s by the Civilian Conservation Corps, whose members stuffed the embankments with trash as well as sand. Here, and all along the Southeastern coast, sea glass delivers pieces of shipwrecks, as well as evidence of pirates, German U-boats, and torpedoes. From Native American trading goods to Prohibition-era artifacts, each piece is a clue to history. A captured moment, imperfect but polished. One of a kind. 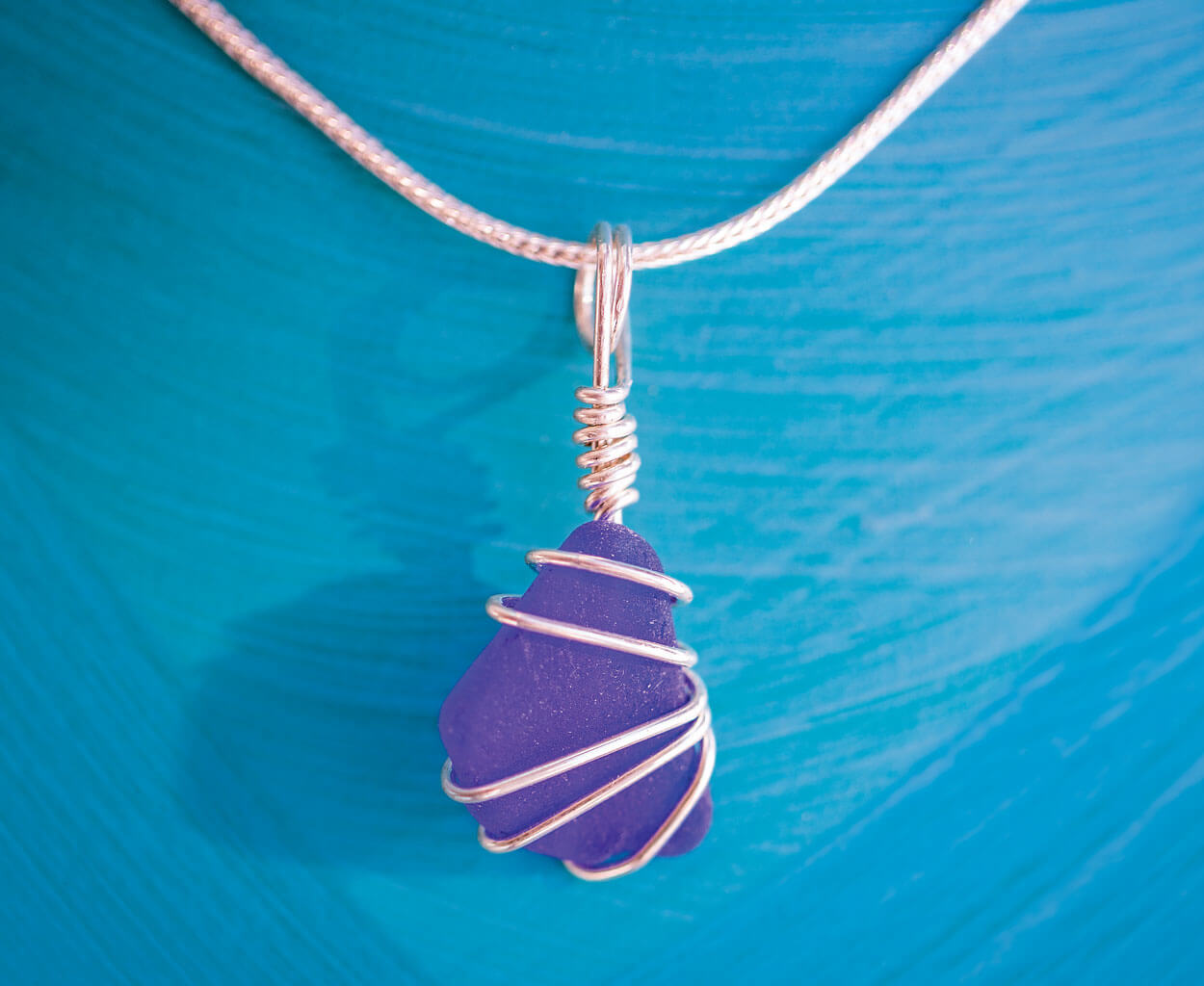 Sea glass is created by the churning of glass shards in a body of water that has a pH above 7. The water changes the chemical composition of the glass, transforming it into the gem of this necklace made by Mark Slagle.

Glass is not sea glass. What distinguishes sea glass is the way the shard has been marked by time. Pieces found on the sand have undergone a long, slow transformation, both inside and out. Over decades or centuries, as caustic water changes the glass chemically, hydration causes pitting and frosting on its surface. Sharp edges are polished by churning and abrasion — not just in the pounding surf, but also in the tides and currents and undertow. On the Outer Banks and other sandy beaches, sea glass remains triangular — roughly the same shape as the original broken piece. But where there is turbulent water and rough terrain, one can find rare rounded sea glass, sculpted by nature into the shape of a marble.

This morning, I’m meeting several local sea-glass artists to learn what to look for — and where to look. I’d hoped Aliya would join us, but I’m an early bird, and she’s a night owl. One of us often dreams while the other is wide awake. We’d gotten in late the night before, a wet wind whipping our hair as we unloaded the car. The dawn light wakes me early. As I open my eyes, for just a moment, I’m surprised to see my daughter’s sleeping face. In the semi-darkness, I study her features, her singular beauty, and think, How could this person have come from me? What the forces of time and nature can create amazes me.

Slipping out the door, I let her sleep.

Mark Slagle, a local jewelry artist and metalsmith, meets me at a coffee shop in Nags Head. He strolls in, tall and lanky as an adolescent, with streaks of gray framing his face. Rusty Banjo, his yellow Labrador, follows close behind, stopping frequently at tables for scratches behind his ears. Everyone seems to know him. 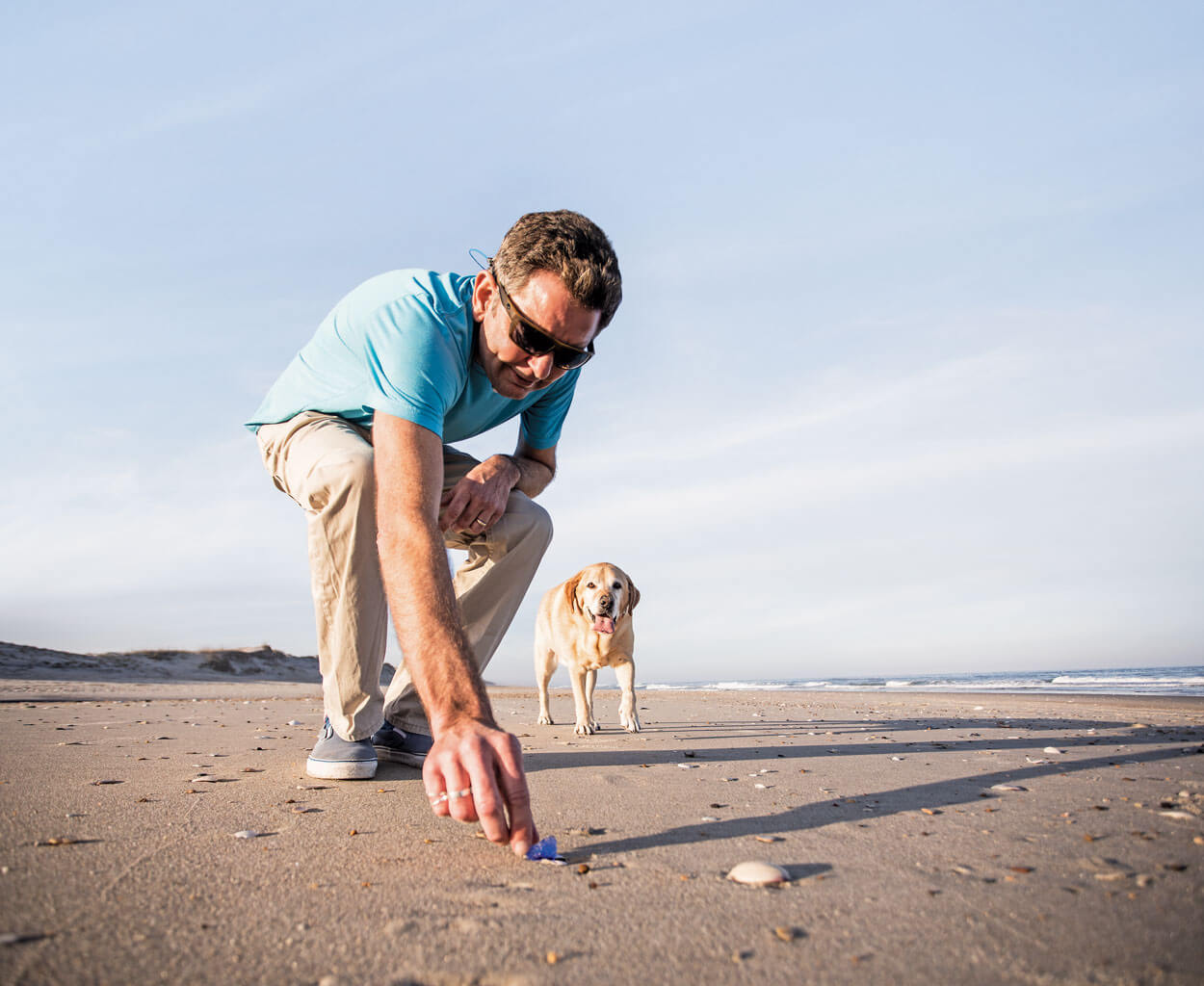 Slagle worked odd jobs on the Outer Banks for years — landscaper, bus driver, church employee — before discovering that he was an artist. It was a cold day, like this one, when he found a heart-shaped piece of sea glass, half-buried and with a moonstone inner glow, near Avalon Pier. He had been looking for inspiration to create something with his hands using materials from the ocean. The perfect piece of sea glass seemed like a sign. He took it home, wrapped it in silver, and gave it to his wife, Cyndi, as a Valentine’s Day gift.

Later, when his father was dying, he found solace in sea-glass hunting: Eyes trained on the sand, he lived in the moment and learned to surrender to what was beyond his control. “Only the ocean and God could wash my worries away,” he says. Sea-glass artists and collectors know how to slow down and pay attention, how to appreciate simple beauty and unexpected gifts. They see patterns the rest of us miss, and their instructions can sound almost mystical: Wait until the ocean settles and the gravel beds appear. Let your eyes glaze over. Learn to see without seeing. Seek flashes of light.

“I hear sea glass calling to me on my beach walks,” artist Margaret Miller says, leaning forward as if to share a secret. Her unruly blond curls fall loosely around her face. The calls come to her as she walks the sand in Kill Devil Hills, pulling her to tangles of seaweed or other places where sea glass likes to hide. After a hurricane or a nor’easter, when big surf churns up ocean treasures, she searches the shoreline at low tide, always abiding by certain rules: No digging, for example. Sea glass appears to her as a gift; she won’t put shovel to sand. Also: No altering. She wraps sea glass in wire instead of drilling into it. And once she picks up a piece, she will not put it back down. She trusts her intuition.

“Why do you bother wrapping precious metal around trash?” Miller’s teenage son once asked her in the dismissive tone known to mothers of teenagers everywhere. Back then, many people would have agreed with him: Sea glass seemed worthless. Then, in 2004, Pure Sea Glass: Discovering Nature’s Vanishing Gems was published, and everything changed. The book uses tides, weather, and historical records to set guidelines for sea-glass collection. It teaches how to use color and shape to identify the age and historical significance of each piece, and it sets standards to distinguish the counterfeit from the real. Today, the book remains the bible for sea-glass collectors and sellers. 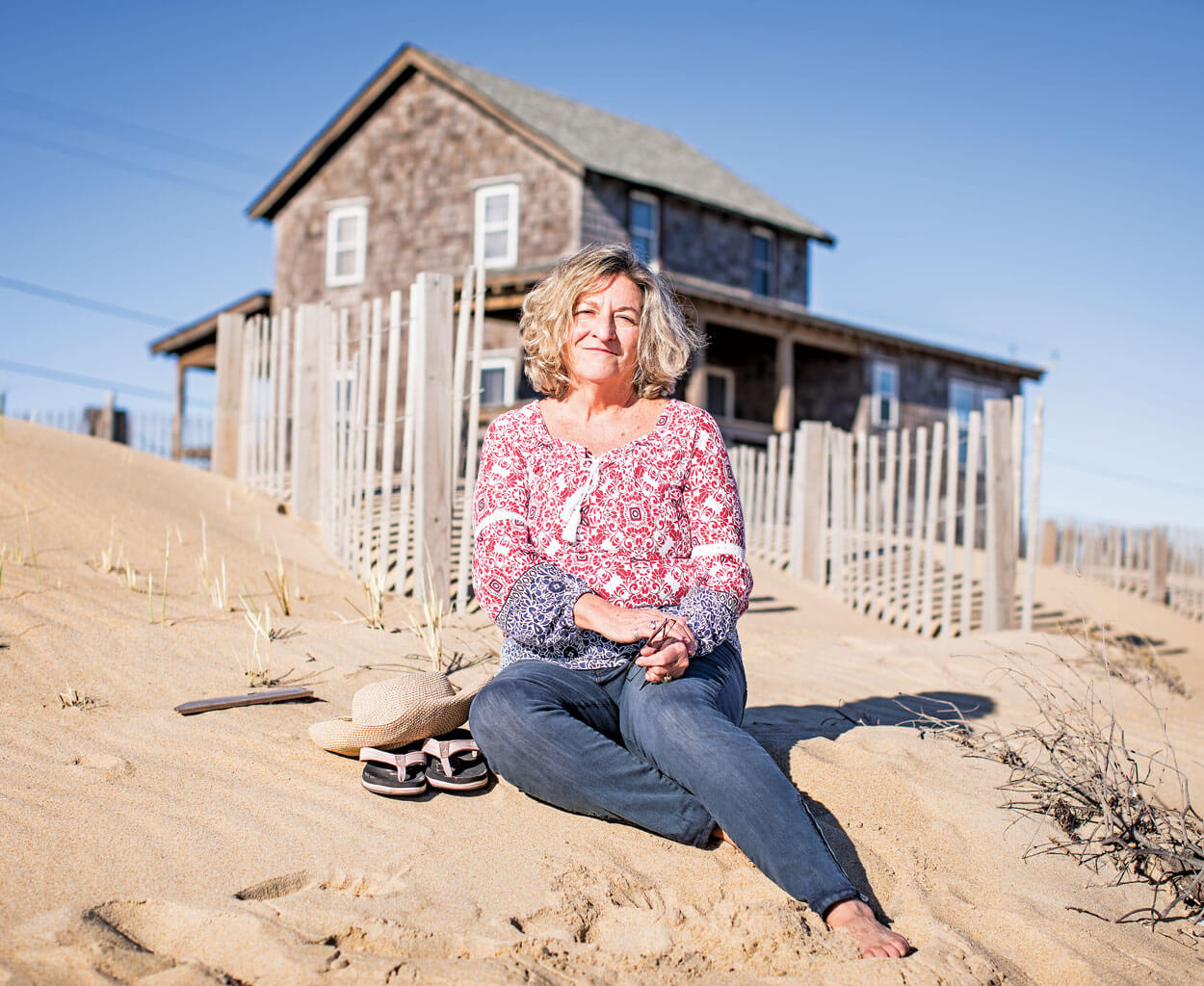 Jewelry artist Margaret Miller never drills holes into the sea glass she finds in Kill Devil Hills. Instead, she wraps it like a hug in metal wire. photograph by Chris Hannant

Still, the art, history, and science that give sea glass its value don’t necessarily explain its allure. To Pembroke Bryant and his 6-year-old daughter, Pippa, the glinting shards of glass retain an air of mystery, too. At Oregon Inlet, his favorite place to search, he and Pippa have found all sorts of transformed treasures, like remnants of Coke bottles from the ’70s and insulator glass from the telephone poles that once lined the highway. But there are no guarantees.

This morning, Pippa proudly shows me what they found on their latest excursion. Unsure what I’m seeing, I study the hard, gray lump in her palm. “It’s fulgurite,” she explains: sand that’s been petrified by lightning. I would never have noticed it, but her father, who has been scouring this coastline for decades, has taught her not only what to see, but how to see.

Look at a certain shape, for instance, and you can see where it came from. Bryant uses local triangular sea glass for his more whimsical designs. But his fine jewelry features rare colors of sea glass in round shapes — the most precious kind — found on rocky coastlines with tumultuous waters. He works with collectors in Iceland, England, and Northern California. Somewhere, perhaps along the northern British coast, a retired expat couple walks the beach at dawn, seeking pieces to send to him.

The image of someone on a distant shore, combing a quiet beach, stays with me. That afternoon, Aliya is finally up and dressed, and my day is half over. We take a slow beach walk together beneath a gunmetal sky. There’s a cold headwind. I’m excited to share with her all that I’ve learned: how nature transforms trash; how every piece tells a story; how turbulence and abrasion polish rough edges; how marks and blemishes distinguish what is real from what is man-made.

“Sometimes you look too hard for metaphors, Mom,” she says. “Sometimes a thing is just what it is.”

I fall silent, my eyes on the sand. She has a point. We’re different in this way. I’m always turning ideas over like stones, examining them from all sides.

We walk along without speaking. Then, she stops suddenly, bends over, and picks up something off the sand. I continue walking ahead, not seeing what she sees. “Look,” she says, running to catch up with me. She opens her fist to reveal a pale shard, small and uneven and seemingly lit from the inside. Her features have changed, too, brightened.

It’s a rich irony that I’ve been learning and looking all day and haven’t found one piece. Once again, I’ve been tromping over treasure, too preoccupied to notice.

“It’s yours, Mom,” she says, smiling as she rolls it into my hand.

I hadn’t expected such a small and precious gift: not worth anything, but priceless nonetheless. I scrape my fingernail across its surface. When I feel its rough imperfection, I know it’s real, and I am delighted.