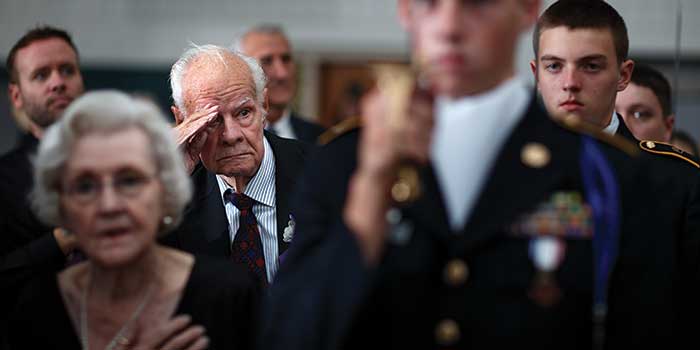 None of them really know each other.

They stand near the whiteboard that reads “WELCOME” in big, black-ink letters, and they trade small details about family and hometowns in a room above a church gym, framed by a foosball table and a few sofas.

They wonder about what is happening downstairs. They don’t know. But they know everyone around them has something in common, something that has bonded them together and branded them for life.

They were wounded in combat, and they received Purple Heart medals. They were soldiers, sailors, and marines; and, they fought in France, Vietnam, Korea, and Iraq.

For a moving, in-depth introduction to the honorees at the Wake Forest Purple Heart Foundation Dinner, visit ourstate.com/purple-heart.

But the war veterans who come don’t see themselves that way. They made it back. Their buddies didn’t. Moreover, they saw, heard, and felt things on some distant battlefield that defied description. And yet, it doesn’t dampen what they truly believe: It was their duty to serve.

They congregate on a Saturday afternoon in a second-floor room. They think of those who didn’t make it back, and they share with others the brotherhood created by a medal no one wants to earn but everyone should respect.

And so they stand — and wait. Once they hear their names, they line up in a stairwell or take an elevator down to walk, get pushed in a wheelchair, or be escorted by a therapy dog underneath 25 feet of drawn sabers.

It’s a somber beginning to a ceremony awash in patriotism. Someone behind a microphone mentions the war they fought in and the number of Purple Hearts they earned far from this church off busy U.S. Highway 1 in Wake Forest.

It happened to them in a flash. But their brushes with death remain with them forever. War changed them — both inside and out. And as they enter the church gym through a tunnel of steel, they realize how much this ceremony really means to them.

At Table 5, Danny Boylan sits beside his wife, Patty. He’s quiet. She knows. She reaches over and squeezes her husband’s right hand.

“Are you all right?” she asks.

Boylan grew up in a family of soldiers in New Jersey. His dad worked as a pressman for newspapers in New York City, after having fought in World War II. Boylan often asked him what it was like.

“You don’t know fear,” his dad said, “until you forget how to talk.”

Boylan never knew what his dad meant until he volunteered for the Army in 1968. A year later, he went to Vietnam and grew to understand what he calls “white fear.”

In battles, a piece of shrapnel hit Boylan in the left eye, and his right palm was sliced open like a roll of deli bologna. Then came the explosion that earned him his Purple Heart.

His armored personnel carrier struck a mine, and shrapnel sliced through his right leg and broke his right ankle. He was blown 20 feet in the air, and in an instant, he was deaf and blind, surrounded by black smoke.

He thought he was dead.

Today, at age 64, living in Wake Forest and retired from running service stations and repair shops, he tells his two granddaughters that he was in the Army, and he got hurt. That’s it. They’re young, no older than 8.

His year in Vietnam brought nightmares and gave him post-traumatic stress so bad he drank to calm his nerves. It destroyed his first marriage, and he couldn’t hold down a job for a decade. In 1983, he needed to be hospitalized to help get his life back on track.

Then, in February, 44 years after his battles northwest of Saigon near the Cambodian border, Boylan received his Purple Heart.

So, at Table 5, he squeezes the hand of Patty, his second wife, a girl he first met in second grade. He listens to the patriotic songs and the speech from a command sergeant major who served in Iraq. He keeps telling himself, “You can’t cry here. Please, don’t cry here.”

He doesn’t. But he comes close.

“For 44 years, you’re struggling with that conflict because it never ever goes away, and this is finally like a happy ending,” he says. “This is where it’s recognized and service is appreciated, and even with the nightmares, you feel you can go on from here.”

Tarsha Burroughs sits at Table 10 near the front. She brought a crowd: her two sisters, her brother-in-law, her two best friends, and one of their husbands.

The Purple Heart Dinner has become a big deal for her. She came last year, and it made her appreciate even more the medal she keeps under glass in her office.

She works as a curriculum specialist for Wake County’s public schools. But when she is in a classroom teaching math to teenagers, she often gets the question from her students:

“Did you ever shoot somebody?”

It was right after midnight when she heard the pop-pop that sounded like a soda can opening. She knew immediately what it meant. It was the telltale sound of an incoming mortar. All she remembers is the flash of light.

Six hours later, she awoke in a hospital bed. She asked for a phone and called her parents. She knew they would be worried about their child, the youngest of seven, the one they still call “Bootsy.”

Since then, she has had two surgeries to repair her eardrum and remove more shrapnel from her face and head. Meanwhile, high fevers and bad ear infections have sent her to a hospital emergency room, and she needs more plastic surgery on her face.

But at 39, she feels lucky. Two of her fellow soldiers weren’t. They died in that midnight mortar attack. They were in their tents, asleep.

He’s a World War II veteran who earned three Purple Hearts in less than a year while fighting the Germans from Italy through France. He singlehandedly captured 18 German soldiers and stared down the barrel of an oncoming tank and the rifle of a German soldier.

In 1944, he was injured three times — shrapnel through his helmet, shrapnel in his back, and shrapnel from a shell that landed near his foxhole and blew off two toes.

As he recovered from his foxhole blast in a hospital bed in Charleston, South Carolina, he felt sorry for himself. Then, he saw two elderly women. He recognized one of them: Helen Keller, the deaf and blind author who had become a political activist.

She walked from bed to bed, placing two fingers on each wounded soldier’s lips to read in her mind what was spoken, and she tapped into the palm of her interpreter’s hand, telling her what she wanted her to say.

Before she left, a soldier thanked her. Keller turned.

“If I’ve done so much with so little, what can you do with so much?’’ Keller asked.

He came alone to the Purple Heart Dinner. Edith, his wife of 64 years, stayed home in Raleigh. Like Burroughs, who sat at the table next to him, he had been before. He came to the first dinner five years ago. Back then, he met a few dozen veterans from World War II.

This time, he met only three.

The number of names saddens him. The dinner draws 41 Purple Heart recipients and 320 people to 46 tables inside the church gym. So many soldiers from his generation never made it.

Alexander Armor is nervous. But he has his therapy dog, Jet.

Armor always feels anxious in large crowds. Moreover, he doesn’t know anyone at the Purple Heart Dinner. His wife’s grandmother, who lives in Raleigh, supports the Wake Forest Purple Heart Foundation, and
Armor came from his home in Tennessee to attend.

He walks in with Jet at his knee, and after a few minutes in the room above the gym, he knows that he made the right decision. He realizes that no matter the conflict, no matter the war, no matter the generation, there is always an unbreakable bond among anyone who has served.

He is Canadian, raised on a farm in Alberta. But he was educated at the Hargrave Military Academy in Chatham, Virginia, and volunteered for the U.S. Army because he loved his new country. To show it, he went to war in 2005 and became an American citizen.

He fought in Iraq on and off for four years. His Purple Heart came in 2005, while traveling in an eight-vehicle convoy. He was in the third vehicle, a Humvee, when it hit an improvised explosive device (IED) and shrapnel shot into his right side.

“I was driving along, and I remember this pressure that feels like God is taking you in his hands and squishing you,’’ Armor says. “The next thing I know, I’m being treated by a medic, and I ask, ‘What the heck just happened?’ ”

The IED made mobility a problem for Armor. He has a bad right knee, nerve damage, and a herniated disk in his back. If he drops something, he can’t pick it up. If he walks into a crowd, he feels hypervigilant because he doesn’t know where the enemy is.

So, Jet helps. She brings Armor his shoes and picks up with her teeth coins, paper clips, and credit cards. She’s a black Labrador retriever. She sleeps beside his bed and goes with him everywhere — even up the 26 steps to B-112, the room with a foosball table, a few sofas, and a few veterans from as far back as World War II.

With Jet at his side, Armor walks back down the stairs, through the tunnel of drawn swords, and sits at Table 1. Jet lies at his feet.

Armor is now a youth minister.

“It was fellowship with other people who understand, and it helps heal old wounds,’’ Armor says. “It made me realize I’m not alone. It does get better.’’

It does get better. Tessie Jackson — a mother of three, a grandmother of five, and a great-grandmother of eight — finds that out here, too.

She sits near the back with her family, cradling the statue of an eagle with its wings spread. It is to honor the military service and sacrifice of her son, Benny, her youngest child. He was killed in October 1969 by a sniper while leading a platoon on patrol in Vietnam.

Since then, in her home outside Wake Forest, Jackson has kept her son’s room the same — complete with the same bedspread and the same trinkets on his dresser.
His Purple Heart and six other military awards hang in a glass case six steps from his room, beside his mother’s brown recliner. Now, his eagle statue sits on the family’s TV.

Jackson sees it every day.

“This is so great,” Jackson says of the eagle statue, minutes after the ceremony. “I was brokenhearted, and I wasn’t going to come. I was going to stay home because I didn’t think I could stand it. And I’m better off that I came.

Jackson tells stories about her son. She speaks fast, she smiles, she laughs.

Yes, she says, she feels better. At least at Table 17.

Jeri Rowe, a Greensboro resident, is a staff columnist with the News & Record. He is the youngest son of a World War II veteran who served 28 years in the Army before retiring as a sergeant major.