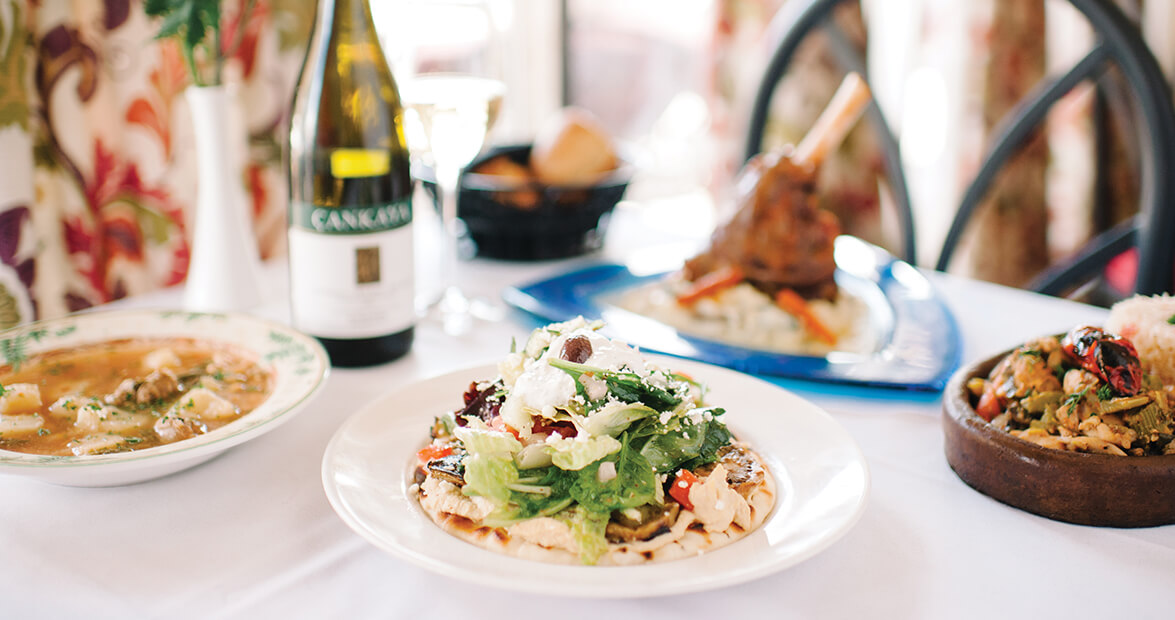 Mustafa Somar is sitting at the end of the bar at Sherefé in downtown Fayetteville, waiting for customers.

It’s raining. No, pouring. Puddles are forming along the road. The few people out in the storm are hunched under umbrellas.

But Somar doesn’t seem to mind. He sips tea. He checks his iPhone. He waits. Finally, around 12:30, Angela Berry comes through the door. She shakes the rain off her umbrella after the short walk from her office near the courthouse.

She lights up when she sees Somar and returns the greeting. There’s a familiarity to it all. He’s happy to see her, but not because it’s slow. He’s happy to see everyone. For the next two hours, Somar will greet all of his guests like old friends. Each one will stop at the bar. Hugs. Kisses. One woman even shows Somar updated pictures of her kids.

Like its chef, Sherefé is something of an anomaly in the Fayetteville dining scene. Good food and good service have made the restaurant a destination for special occasions as well as everyday dining. It’s popular among those at Fort Bragg, home of the 82nd Airborne and the Special Forces. Somar has hosted parties and dinners for generals and visiting dignitaries. But in a market dominated by fast food and corporate restaurants, it is a testament to Somar that a Mediterranean restaurant whose dishes aren’t priced for a budget is thriving. 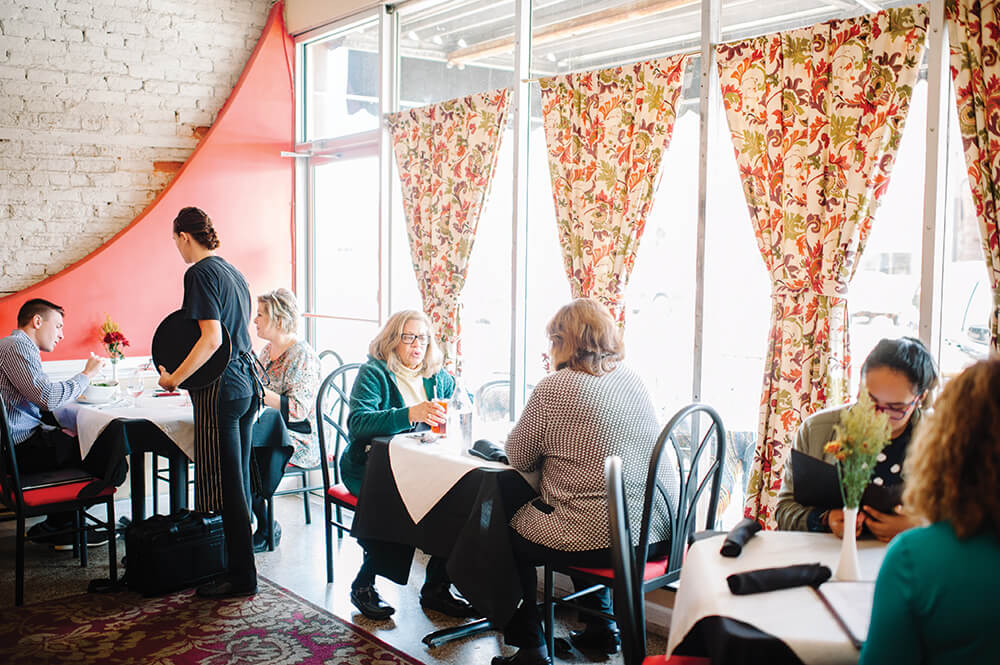 Open the door to Sherefé, and the first thing you’ll notice is the fragrance. photograph by Faith Teasley

The success of Sherefé comes from something not on the menu: hospitality. Somar has built more than a restaurant. He’s built a family. From Somar’s greeting at the door to the warmth of his signature soups, it’s all inviting: Come sit. Come eat. Come drink. Let’s dine.

Berry works and lives in downtown Fayetteville. She eats at Sherefé a couple of times a month.

“The food is so good,” she says as she looks over the menu.

Asked to pick a favorite dish, she can’t choose just one. But today she is looking for soup and a Greek salad. “Mustafa makes it feel like home,” she says. “I love it here.”

The success of Sherefé comes from something not on the menu: hospitality.

Somar opened Sherefé in a small storefront on Ramsey Street in 2004, after three decades spent working as a manager for several hotel chains. A contract to manage a string of budget hotels in eastern North Carolina brought him from California to Fayetteville. He decided to open Sherefé, named for the Turkish word for “cheers,” in part because it was his dream, but also out of necessity.

“There was no place I wanted to eat in town,” Somar says.

In 2012, he relocated to a converted hardware store in Fayetteville’s historic downtown. Hand-painted tiles from Istanbul hang on the walls. On brighter, drier days, sunlight streams into the front of the restaurant past floral-printed curtains. Everything is clean, crisp whites and deep woods. Rustic, yet modern.

Open the door to Sherefé, and the first thing you’ll notice is the fragrance. It’s hard to place right away. It’s pleasant. There is a hint of spice to it. Something Eastern, maybe? Then it comes to you: It smells like home. Maybe not your home. But a home.

Somar patrols the restaurant in a white chef’s jacket with his name and Sherefé on the breast. His clogs have an intricate pattern. He moves with ease from room to room, greeting guests, answering questions from his staff, and tasting the food.

In the kitchen, he loiters near the stove and a pot of soup. He takes out a spoon and tastes the broth. Without missing a beat in his conversation with sous chef Tim Wiley, he sprinkles a pinch of herbs into the simmering liquid. 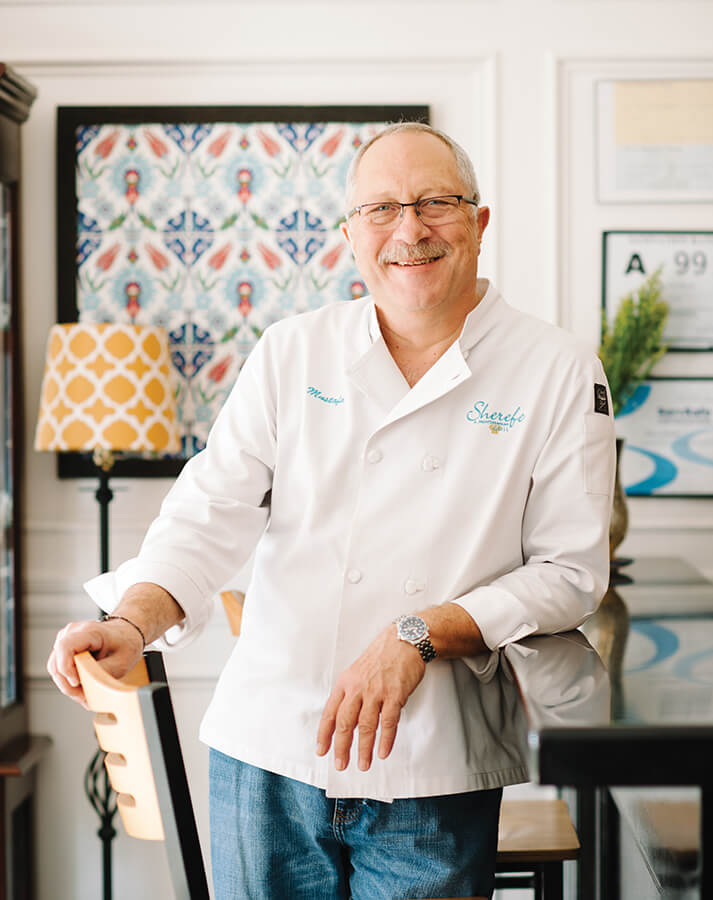 Mustafa Somar hosts cooking classes so that fans of his restaurant, Sherefé, can learn to make their favorite dishes at home. photograph by Faith Teasley

Somar grew up in Istanbul and was raised on the flavors of the region: lamb, olive oil, fresh herbs. Today, his cooking philosophy stays true to his upbringing. His menu is seasonal. Fresh. High end. He seeks out the best-quality meats, seafood, and vegetables; avoids preservatives and frozen foods; and uses only the finest herbs — some of which he brings home from his frequent trips to Turkey.

Everything except the bread is made fresh, and 90 percent of the menu is gluten-free. Menu highlights include fresh-made hummus that is silky smooth, an eggplant pizza with a Greek salad on top, and an exquisite lamb shank with rosemary.

The last is served in a massive white bowl, and you can smell the rosemary before the dish even arrives at your table. The lamb shank stands tall on top of a mound of creamy mashed potatoes. The meat is tender and falls off the bone. Each bite is the perfect mixture of rosemary, savory lamb, and potatoes whipped with smoked eggplant.

“I do layers of flavor,” Somar says. “Nothing on my menu has a singular flavor.”

That’s especially true of Somar’s soups, the real stars of the menu: creamy broccoli and feta. Lemon chicken with a distinctive, tangy broth. Lamb and bean. Spinach and mushroom. Many are created on a whim. One morning a few weeks ago, Somar woke up in the mood for some garlic soup, so that became the day’s soup special.

The soups, along with the rest of Somar’s food, have found a loyal audience.

“People are sick of the chain restaurants,” says Heather Cooke, a local lawyer whose office is near the restaurant. “People in Fayetteville want something new, especially with the revitalization downtown.”

Cooke has stopped in for lunch with another lawyer, Sherry Miller. They order the day’s special — a barbecue lamb appetizer served on a crispy wanton. The sauce is savory and rich with a hint of a flavor they can’t quite place.

“Do you taste the chocolate?” Somar asks them.

Both Miller and Cooke grin at the revelation. Somar, back at the end of the bar, flashes a knowing smile.