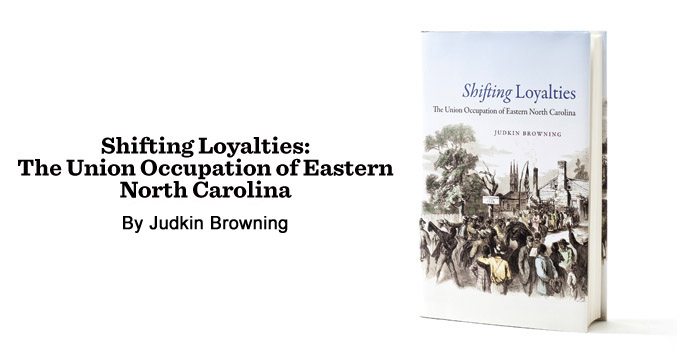 Unlike much of the secessionist South, eastern North Carolina was once considered something of a hotbed for Union sympathizers and collaborators. Many residents of Carteret and Craven counties held a lukewarm attachment to the Confederacy, placing more value on their property and livelihoods than on political aspirations.

At least that was the sentiment in 1862, at the beginning of the Union occupation of New Bern and Beaufort, as documented by Appalachian State University historian Judkin Browning in his book Shifting Loyalties. During the course of the Civil War, local loyalties shifted back and forth, depending on a variety of circumstances, but the populace gradually transferred its allegiance to the Confederacy as the hardships and abuses of military occupation set in.

By the end of the Civil War, this rural, pro-Union pocket that the federal occupiers found welcoming and fertile for recruitment hardened to unstinting Confederate repudiation of Unionism. The turning point: race.

Carteret and Craven residents exhibited a flexible concept of nationhood and cultural identity, typically thinking of themselves as holding a dual citizenship in the South and in the Union. But racial equality was one thing they would not abide.

As Browning documents through dozens of letters and press clippings, white Southerners considered white supremacy the most important concept. The idea of racial equality was so repugnant that they would sacrifice anything to preserve a society based on racial purity and segregation.

As Browning notes, white Southerners could live with the idea of the Union but only as it existed in 1860. Southern whites were appalled by what the war wrought: the Emancipation Proclamation and federal policies letting blacks pursue an education, own businesses, own property, don military uniforms, and bear firearms.

As a result of these sentiments, a distinct, Southern, political identity emerged that no amount of Confederate speechifying and pamphleteering could achieve.