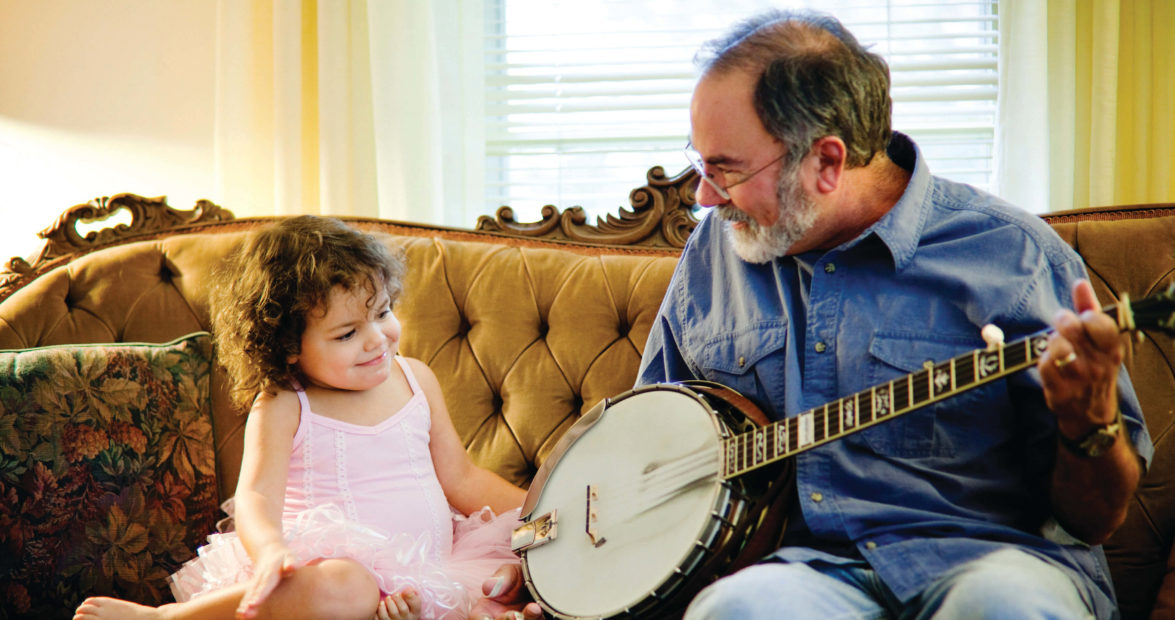 Growing up in the tiny town of Marshville, where the claim to fame is being the home of Randy Travis, entertainment was often hard to come by. Lucky for us, my sister and I had a cheerful one-man-band in our father, Gene Knight. In the evenings, he picked his banjo just for us while we danced in circles around the living room coffee table.

We came to understand that Dad’s banjo was our family’s prized possession. Wherever we went, the banjo came with us; it was too precious to leave unattended. I joke that my sister, the banjo, and I shared equal status. Once, when a fire alarm forced us to flee our hotel room, my mom ushered my sister and me in each hand while my dad rescued the banjo.

I always thought he was a really good banjo player (after all, he was my dad). But over the years, I realized that the rest of the world thought he was pretty good, too. Before I was born, he played in the New Deal String Band, a Raleigh-based outfit of young hippies, now considered pioneers of a progressive style of bluegrass known as newgrass. Some of the band members hung out at the Sidetrack, a coffeehouse by the railroad tracks in downtown Raleigh’s warehouse district. The Sidetrack was an outpost for broad-minded youth, and it attracted world-class musicians traveling along the East Coast.

The New Deal String Band cut its only record on the Sire label in 1969 and named it, simply, Bluegrass. While the album included well-executed, traditional bluegrass, highlighted by Leroy Savage’s high, lonesome singing, Billboard magazine pinpointed the band’s decidedly non-bluegrass arrangements of The Beatles, The Rolling Stones, and Bob Dylan.

The band opened minds to new possibilities in traditional music with innovative set lists and bold hairdos. The talented group picked the fastest bluegrass instrumentals, but also wowed the crowd with songs like “Love Potion No. 9.” When the unconventional youngsters shared a stage with Bill Monroe in 1970, Monroe referred to them as The Hair Boys.

In the following years, interesting characters came and went from the band. Eventually, the band drifted apart, and my dad got a more stable job to support his new family. He continued picking with friends and playing the occasional gig, while Savage continued playing music for a living. With a name like Leroy Savage, who could expect him to work a 9-to-5?

Now, some 40 years later, after my mother’s persistent urging, my dad and Savage cut a new record together. On Rowdy to Reverent, the songs vary from hard-driving bluegrass to a Grateful Dead homage to the “Tennessee Waltz.” Savage’s voice is still impossibly high but now has a seasoned richness that comes with age. My dad’s mastery of the five-string banjo rings out in his signature tune, “Shenandoah Breakdown.”

Their band, aptly named Sidetrack, is a veritable supergroup. It includes Dewey Brown, an accomplished fiddler who plays in Ralph Stanley’s band for his day job; Joe Newberry on vocals and guitar; Mike Aldridge on mandolin; and Bobb Head on bass. The final track, “Will You Miss Me When I’m Gone,” showcases the haunting vocals of Mike Craver, an early member of the Red Clay Ramblers.

When I hear the finished record, I am just as impressed as I was as a little kid dancing around the coffee table with my sister. When Sidetrack played its first gig at the Pittsboro General Store, my little niece parked herself in front of the stage and watched her granddaddy intently. She danced with abandon like she was in her own living room, unfazed by the crowd of spectators, as if my dad and his band were playing just for her.