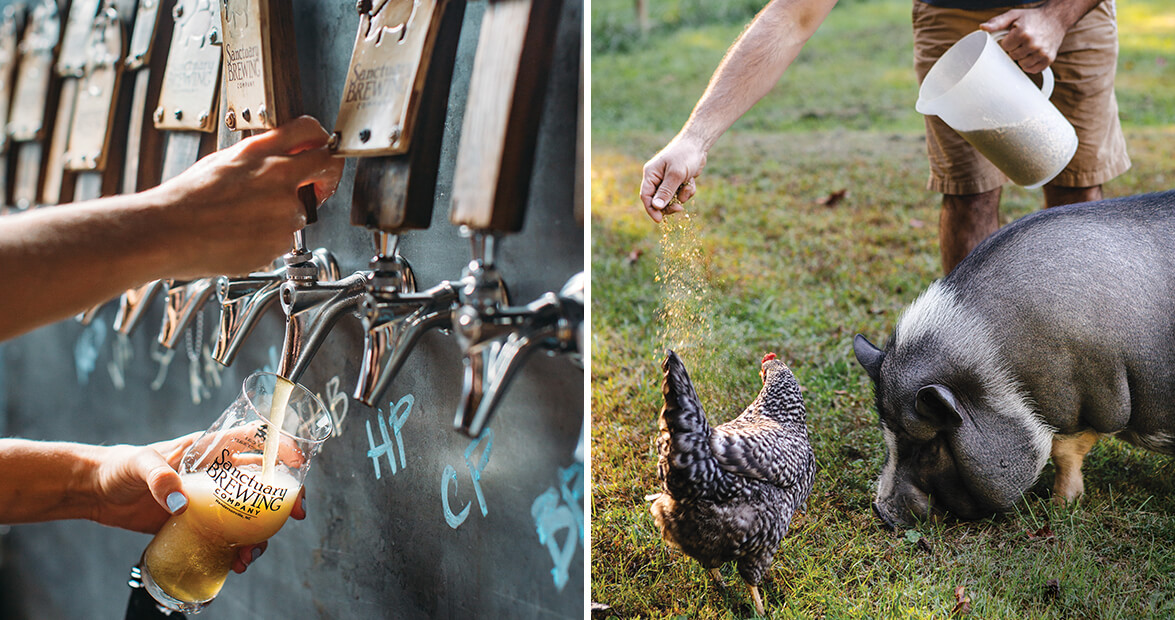 Charlotte and Oliver are best friends, Lisa McDonald says as she crosses her lawn to a fenced enclosure next to the barn. That wouldn’t be unusual, except that Charlotte is a chicken, and Oliver is a 250-pound pig.

Lisa ducks through the gate and offers a whole apple to Oliver and a smaller piece to Charlotte. “You have to be very strategic when you’re feeding them together, but she’s good at stealing,” Lisa says as Charlotte sneaks up to grab what Oliver has missed. “Sometimes Ollie’s ornery; Charlotte keeps him in line. The other chickens don’t like her, so if they come over, Oliver will have a standoff, like, Don’t even mess with her,” she says, laughing. “It makes life easier that they have each other.”

Lisa and her partner, Joe Dinan, care for Charlotte, Oliver, and a menagerie of other animals at their farm-like homestead in Flat Rock, but they’re not really farmers: They own Sanctuary Brewing Company in nearby Hendersonville, where a love for animals and the community is just as important as crafting high-quality beers. Since it opened in 2015, the brewery has quickly become a hub for fund-raising — and pint-raising. In the brewery’s first year, three of their five beer entries made it to the second round at the Great American Beer Festival — quite an accomplishment for newcomers. This year, they won three medals at the North Carolina Brewers’ Cup.

But what Lisa and Joe are most proud of — and what sets them apart in the crowded world of craft beer — is their passion for animal rescue. “I’ve always been an animal lover,” Lisa says, “and I think Joe was to a certain degree, but a lot of it rubbed off on him through me.” Partnering with at least 11 local rescue organizations, Lisa and Joe have found homes for more than 200 cats and dogs; for every animal adopted at one of their events, Sanctuary Brewing Company covers all of the associated fees. Lisa says that their shared interests have made for the perfect partnership: “Joe turned me into a craft beer lover, and I turned him into an animal lover.”

A riot of color lines the white masonry-block wall outside Sanctuary Brewing Company: bright red coats, navy blue hats, scarves and gloves in green and white and black and pink. In the summertime, bags filled with hand sanitizer, sunscreen, canned food, and paper products take their place, but in the chilly winter months, the “Kindness Wall” offers the promise of warmth to people in need. Anyone can leave a coat, hat, or scarf on a hook, and anyone can take one. People drop off boxes filled with items for the wall; last year, a local school held a coat drive just to restock the supply. 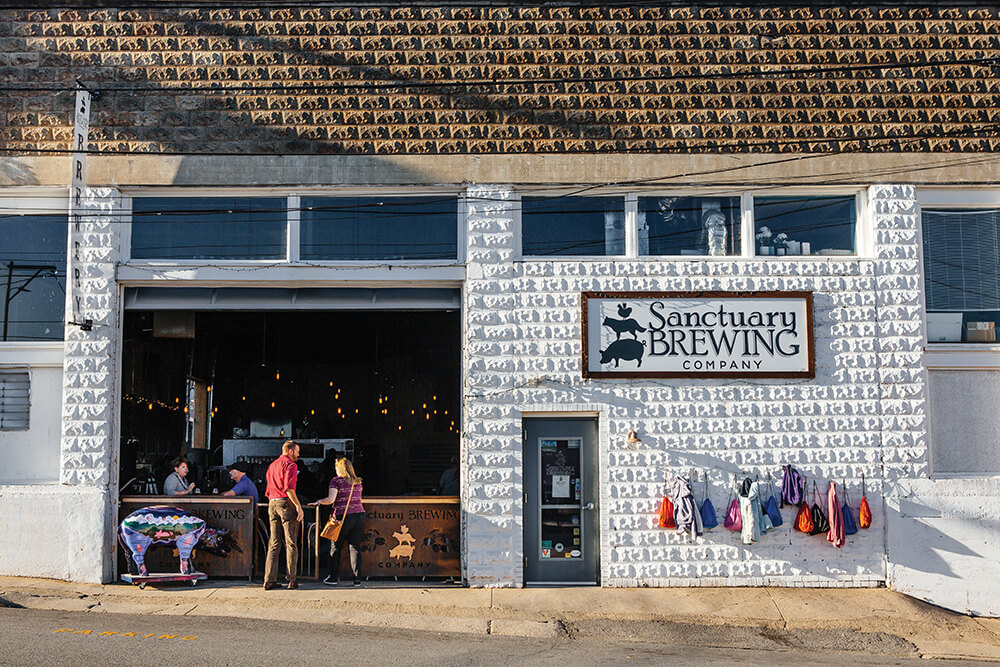 Paying it forward: The coats, hats, and bags hanging on the “Kindness Wall” outside the Hendersonville brewery are there for the taking. photograph by Tim Robison

“There are times in the winter when the wall will be filled with coats, and we’ll come in the next day and the coats will be gone,” Lisa says. “That’s a pretty awesome feeling.”

The inspiration for the wall came from a Facebook post about a park in New York City where someone had left scarves tied around trees for people who needed them. Lisa and Joe brought that practice to their brewery shortly after it opened, and the gesture marked a new phase in their commitment to the Hendersonville community. Since then, the brewery has raised more than $15,000 for various charities — not to mention all of the clothes and other products that have passed across the Kindness Wall. They’ve held fund-raising events for everything from ALS research, to a local school for children with autism, to a friend who was in an accident and needed help with medical bills.

“This is so much more than a brewery,” Joe says. “If it weren’t for the community, we wouldn’t be here. It only makes sense for us to be giving back.”

For Lisa and Joe, being here and growing with the community in Hendersonville is one of their favorite parts of what they do. “Neither of us are from here, but we were welcomed with open arms,” Lisa says. “The people in this town are generous and kind and fun, and everyone knows everyone and supports each other.”

When Lisa and Joe moved to the area from Chicago in 2011, they managed to carve out time to adopt animals despite Lisa’s busy career as a corporate legal consultant. But her “ping-pong lifestyle” — traveling for several weeks at a time and caring for animals at home — was tiring, and she wanted a change. Meanwhile, Joe’s career as a brewer at Wicked Weed in Asheville began to take off. The couple dreamed of someday opening their own brewery, and eventually, an animal sanctuary.

“Then we realized it didn’t have to be a chronological thing,” Lisa says. “We could actually do both of those things at the same time.” They filed for a trademark on the name the very next day. The brewery and sanctuary evolved together: Sour beers, ales, IPAs, and more are made on-site at the brewery, and the rescued animals are cared for about two miles down the road at Lisa and Joe’s home.

While Charlotte and Oliver are distracted by their snack, Lisa slips through the gate and heads back toward the farmhouse, where there are more mouths to feed. She and Joe currently have 16 of their own animals — five chickens, five cats, three dogs, two goats, and a pig — and they foster anywhere from 10 to 40 animals a year. All of them are rescues: Charlotte was found wandering on Charlotte Street in downtown Asheville, and Oliver came from a woman who had been told that he would only grow to be 40 pounds. “It’s busy in the morning and busy in the evening — feeding times,” Joe says, “but other than that, it’s pretty laid-back.” 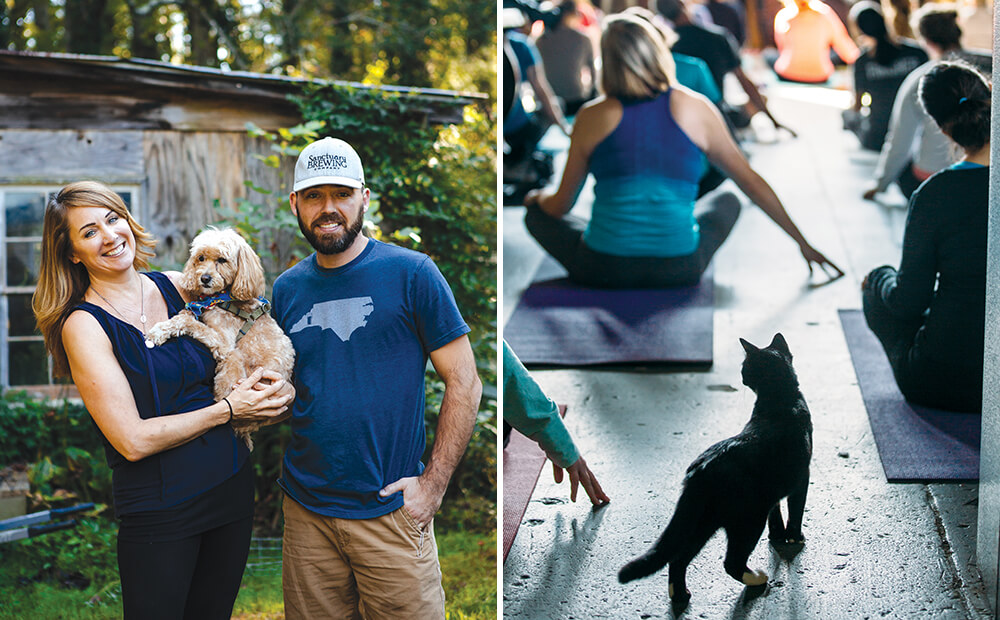 Apart from their fund-raisers, the money they earn goes back into the brewery or into the animal sanctuary. And they host up to 10 events a week: Taco & Trivia night on Tuesdays, adoption events for local rescue organizations on Wednesdays, Yoga With Pets (sometimes adoptable) on Saturdays, a free community meal on Sundays, and live music throughout the week. And that’s not counting the occasional karaoke, bingo, documentary screenings, guest speakers, and pop-up kitchens. “It’s always something,” Joe says, “and it’s always community-based, as it should be.”

Lisa walks inside the house, and the dogs, Harry and T-Bone, follow, the bells on their harnesses jingling cheerfully. Two of the cats — Piper, a gray tabby who was found in a drainpipe, and Oscar, orange and currently sporting a lion cut — are on a chair, licking each other’s heads. “Oh, animals,” Lisa sighs. It’s Sunday, and she’s about to prepare a garbanzo bean mock tuna salad for the free community meal held at the brewery each week. She and Joe hosted the first meal on Easter Sunday in 2016, and it was so successful that they decided to do it every week. They haven’t missed a single Sunday.

There used to be a fruit and vegetable garden in the front yard. “Back when I had free time — when I only worked 40 hours a week,” Joe jokes. He and Lisa hope that, one day, they can open a larger sanctuary — 100 acres for an animal rescue; a brewery and a restaurant; and space for classes on cooking, brewing, animal care, and yoga — enough room for all of their passions. “We’re almost to the point where we can dial it back a little bit,” Lisa says, “but we’re going to expand instead.”

Plans are underway: They’re upgrading the brewing system and gearing up for canning and distribution across the state. While waiting to acquire additional space in their downtown location, an in-house vegan restaurant is already in the works for early 2018. As is the case with everything they do, their ultimate goal is to give back to the community they love.

“The great thing about this place is that, quite often, we get to see the good in people,” Lisa says. “It was already there; we just have this vehicle that lets them express it.”