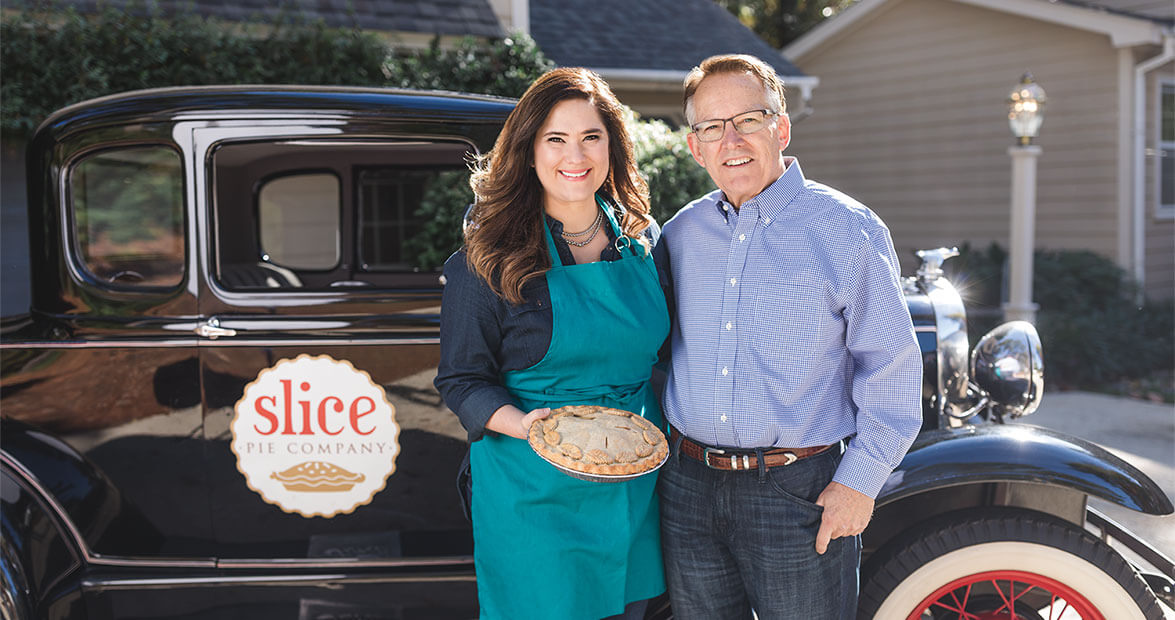 Kristen Cleve can tell with a look who crimped the crust.

Tongue twister, yes, but true nevertheless. The bakers at Slice Pie Company in Raleigh each have his or her own distinctive pinch style. This morning, Kristen is trying to make the crust of a mixed-berry pie as lovely as a fellow baker’s. “I’ve never seen a prettier crimp in my life,” she says. “It’s just a matter of how your fingers move. Kind of a talent, like cross-kicks. It’s delicate. Intricate and tiny … and fast.”

Slice’s origins stretch back generations, to Kristen’s great-great-grandmother’s recipes. As a 5-year-old, Kristen’s father, Mike Mullins, perched on a stool beside his great-grandmother Nannaw, watching her work, and learned to make pies, too. Nannaw used a hardbound cookbook from 1898 that Mike still has, and, thanks to an apple orchard on their land in West Virginia, apple pie was her specialty. “Back then, people made pies from anything that was available, including coffee grounds,” Mike says. But what made Nannaw’s pies exceptional was the crust, the recipe for which she penned by hand on the flyleaf of the cookbook. That crust recipe, Mike believes, is what sets Slice pies apart. “If you put a numerical value on crusts out there today,” he says, “I’ve never tasted one above a zero. Ours is off the charts.”

Slice is headquartered in a detached garage loft in a southeast Raleigh neighborhood. To get to work, Mike, 68, simply crosses his driveway; Kristen, 36, crosses the street. Upstairs, in a kitchen not much bigger than yours, a dozen aprons, colorfully printed with everything from apples to polka dots to pickup trucks, dangle from a door hook. “Yay, pie!” reads a magnet on a whiteboard. There’s a sink, a couple of stainless steel tables, stacks of mixing bowls, a sifter the same size as yours, and two sleek commercial ovens that look like microwaves on steroids, capable of baking 32 pies at a time.

But possibly the most important object in the kitchen is the framed blue ribbon from the 1997 North Carolina State Fair. Mike entered an apple pie — and won.

Mike was a minister when Kristen, his fourth child, was born. He also had a job in sales in order to support his growing family, but he continued baking pies for family and friends, and Kristen and her siblings gave many of his pies as gifts. “People kept saying, ‘This is the best pie I’ve ever eaten in my whole life,’ ” she says. One Thanksgiving Day — at a meal with pie on the dessert menu, of course — the idea of a pie business was born. 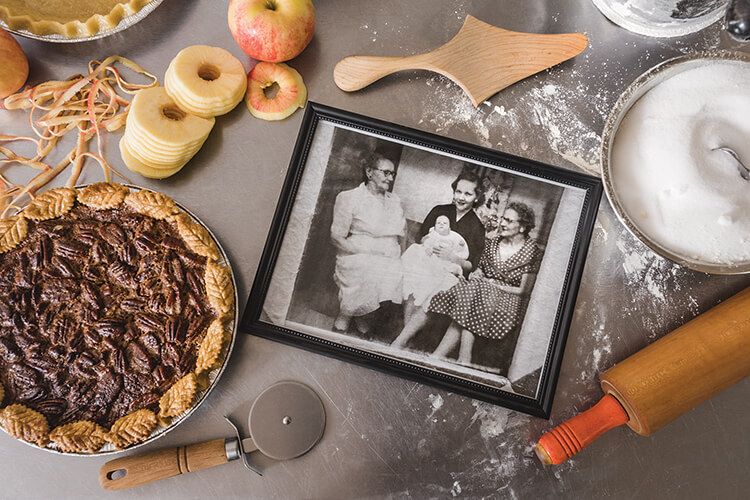 The father-daughter pair — 50/50 partners — launched Slice in March of 2014. Kristen, who’d previously had a comfortable work-from-home career, took a picture of their business card, posted it on social media, and let word of mouth — and folks searching for homemade pies on Google — take over. And boy, did it. Orders came from individuals, companies, restaurants, and markets. Mike leans in, because, you know, it’s a secret: One of his friends is a higher-up at Whole Foods and can buy pies there for $3, but instead, he’s one of Slice’s best customers. “He’s addicted,” Mike says, an adjective he uses frequently to describe Slice’s 22 classic pie flavors, including fruits, chocolates, Key lime, lemon chess, and pumpkin. Coconut cream is Kristen’s favorite. “I don’t even like coconut,” she confesses.

Kristen removes a hot pecan pie from the oven (not a secret: 325 degrees for 45 minutes). If necessary, she, her father, and their crew can bake 150 pies a day. Because they want the pies as fresh as possible on delivery day, a large order means a 20-hour shift. On those brain-drain days, Mike leaves instructions everywhere for his pies, and goes over them with everyone about six times. “A teaspoon left upside down means I’ve already put that ingredient in,” he says.

What doesn’t go into nearly every crust and filling are eggs, soy, lard, butter, or any other dairy product, which makes their pies “basically vegan,” Mike says. Gluten-free is available, too. How, then, are the pies so addictive? “I just don’t know how we do that,” he answers. “Ask my great-grandmother.” Another secret. “Most pie makers use the crust only as a vessel to hold the filling, so it has no taste,” he continues. “Our crust is the exclamation point. It says, ‘Holy cow, what is this?’ Without all those binders, it doesn’t get soggy.”

“Oh, look,” Kristen says of the pie cooling on the counter, “it’s pulsing — that’s the heartbeat of a pie.” Sure enough, dark caramel liquid is oozing from the crust slits, as though it’s sighing, like someone who’s eaten too much, well, pie.

In November 2016, Slice was contacted by a San Francisco-based tech company that ordered nearly 500 pies for their clients. The list was loaded with important names, mostly in California, but, you know: Who they were is a secret. The company received its largest response ever from grateful recipients. Today, Reeds Jewelers is coming by to fetch 84 Slice in a Jar pies — nine ounces baked in a glass container about the size of a jam jar — and 132 four-ounce Slice in a Jar pies, adorable minis in baby-food-size jars (always apple; no crimp). The crusts are adorned with dough leaves, a specialty, though Slice also sculpts everything from trefoils to stars to sailboats, plus teddy bears, monograms, and cherry branches on top of pies. The most time-consuming to make: pies with lattice, whose tops are most definitely woven. 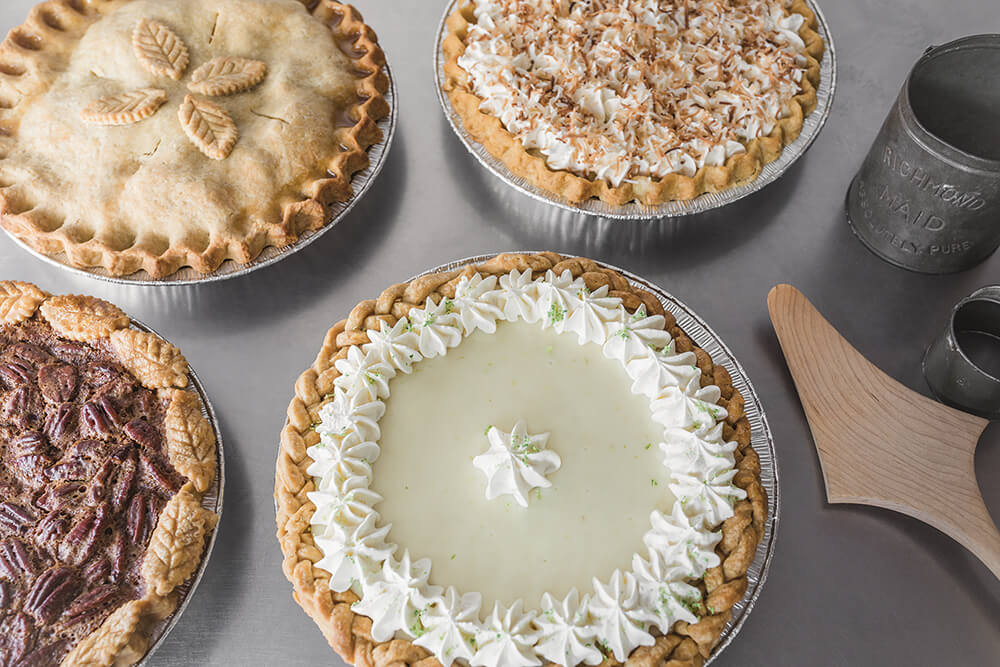 Slice Pie Company specializes in delicious and beautiful crusts, such as those adorning their pecan, apple, coconut cream, and Key lime pies. photograph by Eric Waters

The strangest order Slice ever received was from a customer who was hosting a contingent of Norwegians for Thanksgiving and wanted “Norwegian pies,” which turned out to be a “sugary thing that would be an acquired taste for most Americans,” Mike says, although the guests adored them. One Slice customer shows up every Friday to pick up five pies, which he delivers as a thank-you to people he’s done work for. He’s a major contractor, but his identity must remain a … sigh.

The most popular of their flavors is, unsurprisingly, apple. Chocolate chess is the favorite of the chocolate pie-eaters. Northerners tend to order rhubarb, which Mike cuts up himself, 80 pounds at a time. For sweet potato pies, he boils 60 pounds of the tubers. Raspberries, despite what you might think, make a wonderful hot pie. “We have some enhancers to pull the flavor out,” Mike says without revealing what they are, because … you know …

Mike’s specialty is French meringue, which contains more egg whites to produce a higher dome than most meringues, and a glossy finish. “Meringues are what I call ‘immediate pies,’ ” he says. “They’re designed to be made and eaten very quickly.” For her part, Kristen prefers making fillings. They work side by side, pie by pie. And every single one is from scratch.

Eliana, Kristen’s 6-year-old daughter — Nannaw’s great-great-great-granddaughter — has become a baker, too. She saunters in after school and starts her own pie. She measures, adds, sifts, kneads, and places her dough on a one-of-a-kind pie press that father and daughter searched and sourced and had made specially to …

Well, that’s a secret, too. But you can be sure it involves that off-the-charts Slice crust.

Slice Pie Company
Slice pies can be ordered directly from the bakers or purchased at select stores in the Raleigh area.
(919) 349-8499
slicepiecompany.com