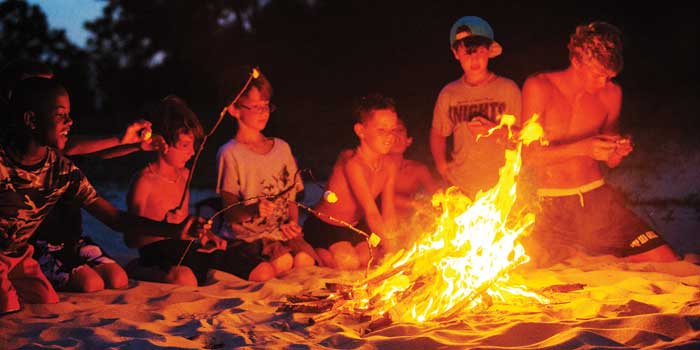 Right is right, even if no one else does it,” said Juliette Gordon Low, founder of Girl Scouts of the U.S.A.

Her sentiment proves true in many of life’s situations, including the making of that familiar campfire treat known far and wide as a s’more.

First, a little background. I was not a Girl Scout, which has nothing to do with my feelings about the organization but everything to do with my feelings about being a joiner. (I’m from a small but rowdy clan of Southern Jews who mostly subscribe to the Groucho Marx school of thinking: we usually refuse to join any club that would have us as members.) Nevertheless, I do believe in Low’s idea that there is a right thing to do and a right way to do it, even if the pursuit is a lonely road.

What does this have to do with s’mores? Two things.

The first is that the dessert has a history. S’mores became popular after a recipe for them appeared in a Girl Scout handbook in 1927 called “Tramping and Trailing.” So there is a right way.

The second thing to know is that a s’more is not, as some folks mistakenly think, something you can throw together willy-nilly if you have some graham crackers, a chocolate bar, a couple of marshmallows, a stick, and a fire. Yes, those happen to be the ingredients for a s’more — the science part of it, if you will — but there is a definite art, a right way to make one.

“Toast two marshmallows over the coals to a crispy, gooey state,” the original text from “Tramping and Trailing” reads. “Then put them inside a graham cracker and chocolate bar sandwich. The heat of the marshmallow between the halves of chocolate bar will melt the chocolate bar a bit. Though it tastes like ‘some more,’ one is really enough,” it continues, in what is perhaps an early admonishment for healthy eating.

The text from the handbook is a good description of how to make a s’more, but it doesn’t tell us what one is supposed to taste like. It might as well be describing how to put together a stereo. But we’re not building a stereo here, we’re making something to eat, something meant to be excessively sweet and ooey-gooey delicious and, best of all, something that will become a memory to pass down to our own daughters and sons.

Although I may not have been a Girl Scout, I have always been a cook. My earliest memories are of being in the kitchen with my Mema, watching her as she made the biscotti-like Jewish cookies called mandelbrot. I remember the exquisite torture of waiting the full 30 minutes for them to bake and the moment of joy when my grandmother let me eat the first one once they were done. You had to be patient, but it was worth it.

Let’s face it, if you combine marshmallows, chocolate, and graham crackers even in the most neglectful of ways, you’ll end up with something that tastes pretty good — even if the marshmallow is incinerated, the chocolate isn’t softened or melted, and the graham crackers were purchased in 1996. But why settle for that mediocrity?

There’s one secret ingredient to make a s’more that’ll change your life (or at least your campout). Patience.

A s’more is one of the most deceptive foods. It has commonplace ingredients, combined in a common way. You don’t even need a stove. But a s’more is also an amalgam of flavors and textures. Its quality relies on the interplay between the crunch of the cracker; the sweet, mushy tension of the melting marshmallow; and the velvety smoothness of the chocolate.

To get it right, you have to take it slow. And it all comes down to toasting the marshmallow.

This is the crucial step. Thrust yours into the fire, and it’ll catch, turn black, and in the worst cases, taste like lighter fluid. Whatever you do, don’t put your marshmallow directly into the flame. Instead, hover it just above. Let it toast. That’s why they’re called toasted marshmallows.

By this time you’ll be salivating. You’ll know something good is coming; you’re going to be patient. You’re going to spin your stick slowly. Friends will be on their second s’mores, wiping the charred remains off their lips from their first ones, cursing their burned tongues.

But not you. You’re going to wait until that marshmallow is golden brown all over. Sing the whole second verse of “Ring of Fire” (“I fell for ya, like a child/Oh, but the fire went wild”). Now it’s time.

Prod the marshmallow gently with your finger. Does it give? No? Put it close to the flame again, spinning it slowly. Test it again. Yes? Then slide it on top of a chocolate-topped graham cracker. Carefully lay another cracker on top of it. And gently push the whole thing together.

Now that’s a s’more. It only took me about 30 years to get it right, but I did. Now I try to teach my boys, ages 8 and 5, how to make s’mores. I want them to be the grateful little repositories of all that I learned from my Mema in the kitchen, of how I know that patience is its own reward. And what do you think they do?

Yep. They put that marshmallow on the stick and shove it in the fire. They pull it back seconds later, all black and charred. Then they slap their s’mores together and grin at me and ask for “s’more.” But I think they’ll learn. I’m patient, and I know I’m right.

If you’re not comfortable with the grit and grime of camping, we know where you can find a tamer version of the campfire classic in Atlantic Beach.

Amos Mosquito’s, owned by Sandy and Hallock Howard and Dave Brumley, is a family restaurant that has been serving s’mores on its dessert menu since it opened 14 years ago.

It’s no wonder this is the restaurant’s most popular dessert item. Imagine watching the waiter approach your table carrying a small hibachi grill, a Hershey bar, six graham crackers, and six marshmallows ready to be skewered and toasted. A waiter lights the grill right at the table, and diners cook their marshmallows over a small, open flame before building their own s’mores.

Customers get creative with marshmallow-toasting methods, Sandy says. Some char their marshmallow right away, sticking it directly in the flame until it burns. (Our accompanying story ought to set those patrons on the right path, though.) Others are more patient, slow-roasting the marshmallow high above the flame.

The chance to put together the ingredients for your own s’more fits in well at a restaurant where everything down to the salad dressings is made from scratch. And even with 15,000-20,000 s’mores served a year, Sandy says there’s never been a mishap. — Caroline Leland

Kelly Alexander is a James Beard Award-winning writer in Chapel Hill. She is a former editor at Saveur and Food & Wine magazines. She teaches food writing at Duke University.