I grew up in Boone, a small town perched among the higher peaks of our Blue Ridge Mountains, a place that expects a few good snows each winter, or at least we did back then. Despite all that snow there for the taking, I recall making snow cream only once, after reading about it in a library book when I was in third grade.

Homemade snow cream is sweet and cold, nothing more than sugar, milk, vanilla, and snow stirred together, and nothing less than magic. It requires copious amounts of freshly fallen snow — which, in much of North Carolina, is a phenomenon as rare and fleeting as shooting stars, as I would come to learn. People don’t make snow cream because they have a recipe; they make it because having enough snow to make a batch is a special occasion.

My grandparents were game to help with my experiment, as grandparents often are. Mama Madge lent me her large enameled dishpan — her unit of measurement for many things, like a mess of beans from the garden — to harvest my snow. Daddy Fred went out with me because he was always up for my adventures. We trudged into the backyard, to a spot where the snow was still as smooth and soft as a freshly made feather bed. Daddy Fred held the pan while I scooped up heaping mittenfuls of snow.

Back in the house, Mama had gathered the sugar, milk — I’d bet my lunch money it was the canned milk she liked in her coffee — and vanilla. The yellow wooden step stool that brought me up to counter height was in place. I concocted a big batch with great flourish, stirring with a long-handled spoon. Mama scooped my handiwork into the brightly colored aluminum drinking cups we used for supper each night. I don’t recall much about what that snow cream actually tasted like, but I’m certain it was perfectly delicious. Snow cream always turns out just right because it’s magic in the first place.

Snow cream magic struck again about 30 years later. This time, I was the mama, and the snow cream connoisseur was my then 4-year-old daughter. I’d moved down off the mountain and was living in the flat land known as the Triangle, a place where measurable snow is rare. Due to a string of dry winters, my daughter had never seen more than a dusting. Newscasters predicted a whopper, but every North Carolinian knows that a snow forecast can be fickle. This time, it was accurate. Big, fat, feathery flakes started coming down overnight, and by morning, the ground was blanketed. I heard my sweet, footy-pajama-clad girl get out of bed and peek through the blinds into the backyard. She gasped with delight. Then I heard her run across the hall and look out another window. “Mama! Mama!” she exclaimed. “It snowed in the front yard, too!”

That snow was one for the record books, something like 20 inches. We didn’t have a sled, so I pulled out my largest baking pan, so big that she could sit on it with legs stretched out long. For hours, she scooted down our driveway alongside a gaggle of squealing children. 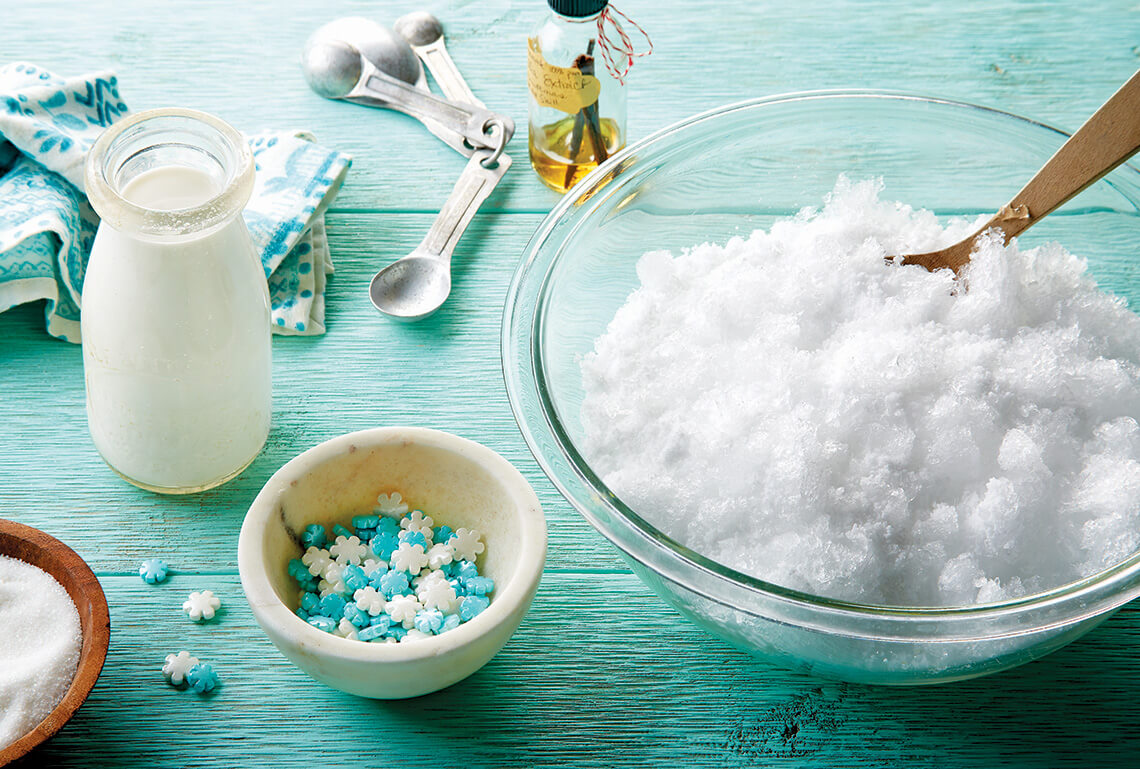 Maybe snow cream came to mind because I knew there would be few snow days of that caliber in her childhood. Or maybe a snow angel whispered in my ear. Of course I pulled out Mama’s dishpan and helped my daughter scoop up mittenfuls of snow. She and her sledding buddies tumbled inside and shed their rarely worn winter wear near the door.

I put the dishpan of snow on the counter and slid chairs up to the edge so the little ones could reach. I handed each of them a cup to scoop some snow into the mixing bowl of vanilla-scented milk and sugar. Everyone got a turn to stir.

My daughter, now grown, can’t recall what that snow cream tasted like, but she’s certain it was perfectly delicious. Snow cream might be the sorriest ice cream you’ll ever try, but it’s guaranteed to be the best snow you’ll ever eat.

Fluffy, freshly fallen snow works best. Some North Carolinians advise waiting until the second snowfall so that the first one can clean the air. That might be prudent, but in places where even one snow is unexpected, it’s also risky, like hoping to pull two aces in a row from a deck of cards. No matter the timing, be sure to scoop from a part of the great outdoors that’s clean enough to eat off of.

Whisk together the milk, sugar, and vanilla in a large bowl and refrigerate while you get the snow. Bring in more snow than you think you’ll need, because it often melts more than you expect it will. Stir snow into the milk mixture until it reaches the consistency of an extra-thick milkshake.

Variation: Replace the milk and sugar with a chilled can of sweetened condensed milk.

Once you’ve tried classic snow cream, check out our video to discover a few twists on the tradition. Cheerwine, anyone?