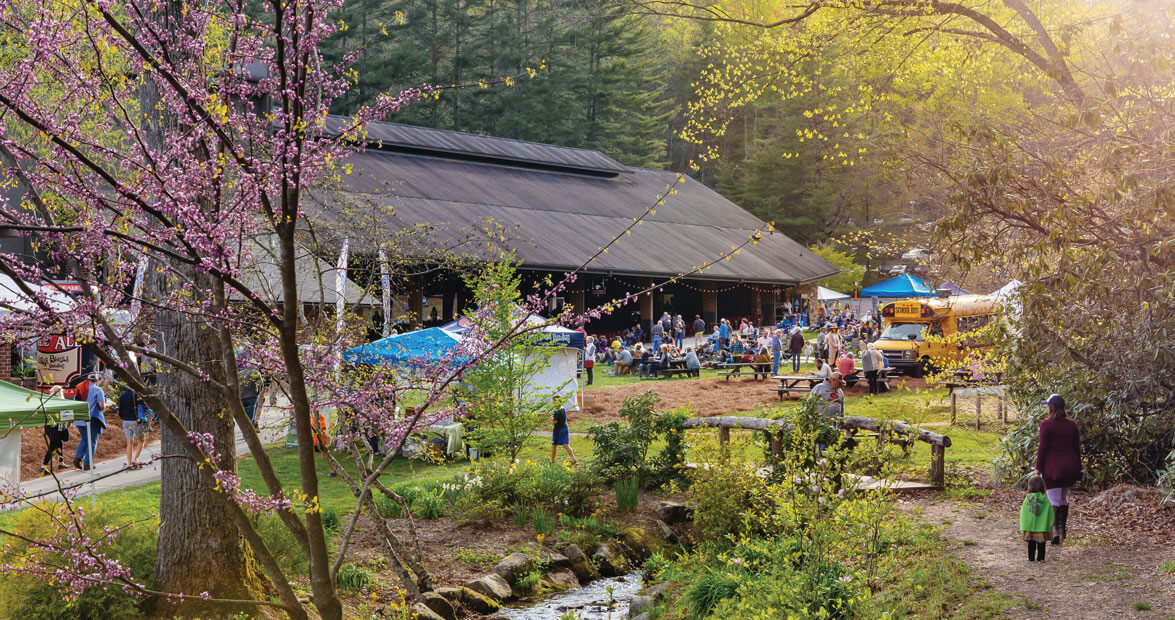 Some parents push their children toward relationships in the hope that those relationships will result in marriage or job offers, but not Cindy Platt. Her reasons for encouraging her three children to forge new relationships were altruistic. It was at her urging that her youngest child, Woody, the lead singer of the Grammy Award-winning bluegrass band Steep Canyon Rangers, reached out to John Felty, a musician and concert producer in the Platts’ hometown of Brevard.

“Woody’s mom was the instigator in us joining forces,” John says. “Woody called me up and said, ‘My mom thinks that you and I should create a bluegrass festival and make it a fund-raiser for the Boys & Girls Club.’” Woody and John wasted no time creating the Mountain Song Festival, a three-day celebration of bluegrass that features marquee musicians like Robert Earl Keen, Shannon Whitworth, Tim O’Brien, and Sam Bush and bands like the Taj Mahal Trio in Brevard each fall. (The Steep Canyon Rangers are the host band.) Fourteen years later, the Mountain Song Festival has raised nearly $1 million for the Boys & Girls Club of Transylvania County — further proof, as if any of us need it, that mothers know best.

Woody and John, cofounders of Mountain Song Productions, figured that if they could have that much fun and raise that much money with one music festival, they ought to try two. John had experimented with a smaller version of a songwriter-focused festival years earlier. The timing seemed right to launch it for a bigger audience. 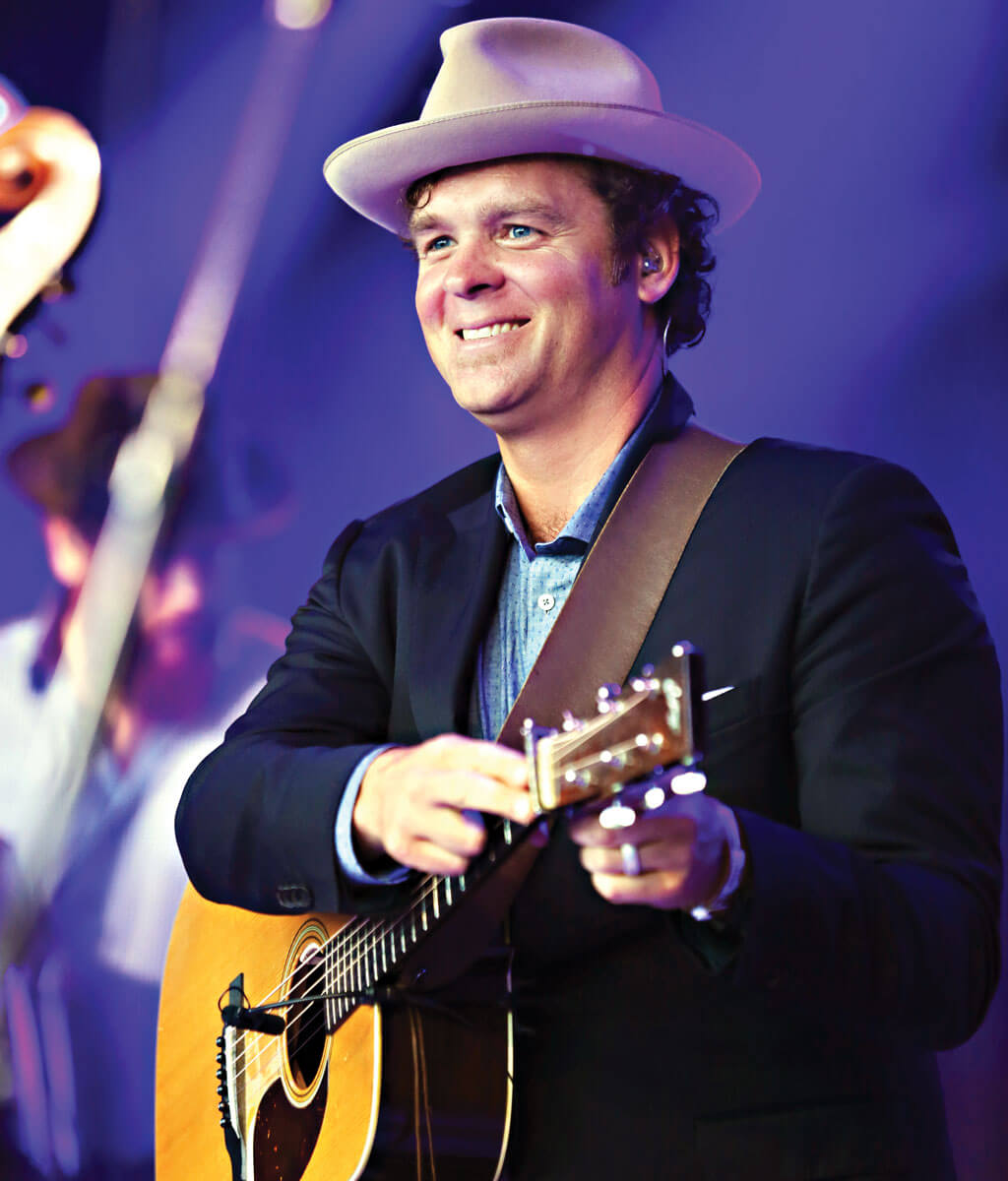 So on a crisp afternoon each April, the Songsmith Gathering springs to life at the Brevard Music Center. From the amphitheater stage, where Yo-Yo Ma, Joshua Bell, and countless classical luminaries have performed, comes music native to these forested hills and hollers: ballads. Songs of broken hearts and timeless woes and simple truths.

The opening act is a Brevard local, Clint Roberts, whose music is heavy on electric guitar and harmonica, with lyrics that remind one of old country crooners like George Jones or Glen Campbell — if those crooners had grown up listening to Pearl Jam. Honey, I’ve been thinking, as you know I’m wont to do, Clint sings out. Maybe this here ain’t the time or place for the likes of me and you. These are songs with tales to tell. With each one, a new story begins.

These are songs with tales to tell. With each one, a new story begins.

While the Mountain Song Festival leans heavily on bluegrass, Songsmith highlights Americana music and songwriting. “A great song transcends genre,” John says, “and there will be plenty of great songs performed today.” The lawns around Whittington-Pfohl Auditorium are scattered with blankets and folding chairs that will stay occupied long after the blue sky turns dark. Folks have come to hear singers and musicians who are also accomplished songwriters: They’ve written songs covered by artists like Brad Paisley, the Dixie Chicks, Bonnie Raitt, and Bon Iver. They’ve had their music performed by Willie Nelson and Carlos Santana. But here, they perform it in their own voice, their own way.

When the food trucks roll in — Brevard’s Rollin’ Smoke BBQ and others — the smells of springtime mingle with smoke. Texas troubadour Beth Wood takes the stage, acoustic guitar in hand, and sings, It’s an interstate world. I am a back-roads girl … Surrounded by woods, her words match this place.

Tucking into plates of ribs and brisket, Walter and Carol Wilson, a retired couple originally from Georgia, explain that they heard about this gathering through the Mountain Song Festival. “When we found out that Woody Platt has a role in Songsmith, we said, ‘Well, I guess we need to go to that, too,’” Walter says. He nods toward the main stage and lifts another forkful of brisket. “I’m glad we did.”

Another, more intimate stage has been set up by the small lake on the property. Mia Rose Lynne, a Nashville transplant by way of California, is picking her guitar and singing, I stared you down, begging, ‘Baby, read my mind’ … Her gorgeous voice rolls across the lake as if carried by the breeze. Children run past, barefoot, dodging the crowds in front of the stage. Back here, on the lake, it seems as though Mia Rose is the only musician for miles around. 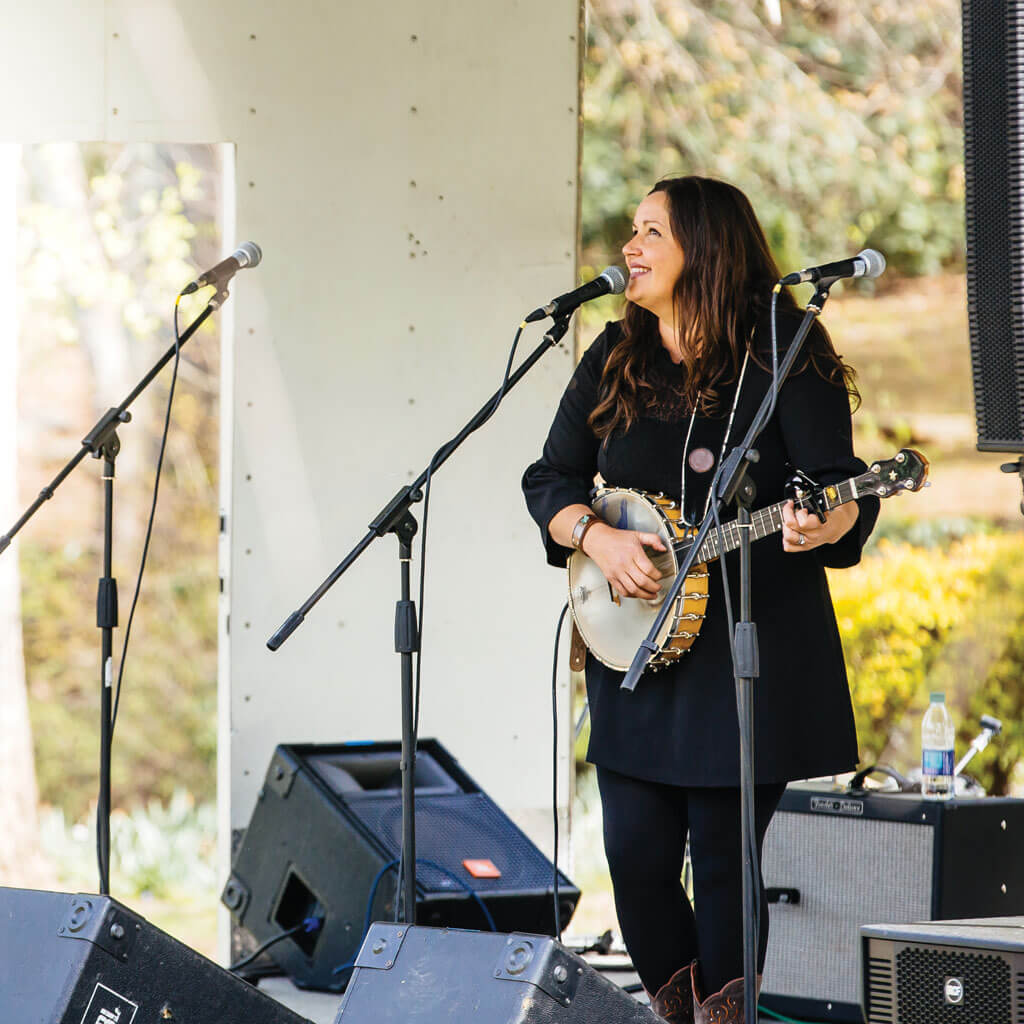 Cindy Platt’s husband, Al, and their oldest child, Parker, have planted themselves by the lake, too. Cindy, who passed away suddenly in 2013, would surely have been proud of what Woody and John have created — not once, but twice — to benefit her favorite organization, the Boys & Girls Club, whose local chapter was renamed in her honor a few years ago. “It’s something that she deserved,” Al says, “but it’s not something she would’ve advocated for on her own behalf.”

Al would know. The two were high school sweethearts in Atlanta and were married for more than four decades. They raised three children together and saw each other through the building of careers and communities. Al opened Platt Architecture in Brevard 35 years ago, and Parker works alongside him. While Al designed structures, Cindy designed community projects. She founded and worked with charities that served children in the area. She served two terms on the city council and spent four years as mayor pro tem. In 2000, she worked to open the Boys & Girls Club of Transylvania County, and in 2005, she received the Boys & Girls Clubs of America National Medallion.

“She had an infinite amount of patience and a will to make things happen,” Al says. “She was one of those fearless women who just wouldn’t take no for an answer.”

Parker laughs. “Like when she came to me and said, ‘We need some young people involved in the Boys & Girls Club, so you need to join the board.’” Nothing seemed too daunting for his mom, he says. “She’d say, ‘If we fail, so what? At least we tried.’”

“You can learn a lot from a woman like that,” Al says. After Cindy’s death, a memorial event was held at Brevard College to honor her life. The theater seats 700 people. It was standing room only.

“She was one of those fearless women who just wouldn’t take no for an answer.”

As the sun starts to drop behind the hills, the festival crowd settles in for the evening shows. John watches from the wings of the amphitheater as Sarah Siskind takes the stage. She’s been here a few days already. The Thursday and Friday before the crowds arrive and the shows start, Songsmith hosts a songwriting school, offering classes with titles such as “Extreme Noticing,” “Beating Writer’s Block,” and “Inspired by Life.” The classes, which are open to songwriters of all levels, are taught by Sarah and Beth Wood. Both of them, John says, “have a great gift for helping people get out of them what is inside of them and put it in a song.”

Sarah has written songs for some of the best-known recording artists in the country. Her own music has appeared on the television shows Nashville, Pretty Little Liars, and The Wire, among others. “In this business,” John says, “it takes that kind of drive and her kind of fearlessness to succeed.”

That lesson seems to fan out into the night: It’s found in Cindy’s legacy of working hard for the local children who need help the most, and in the performers, and the aspiring songwriters, too, who have come to soak up their words. Dusk creeps around the edges of the amphitheater, and the stage lights form a perfect halo above where Sarah stands behind the microphone, her guitar in hand. Everyone, John included, is lost in her voice, her song. You can learn a lot from a woman like that.