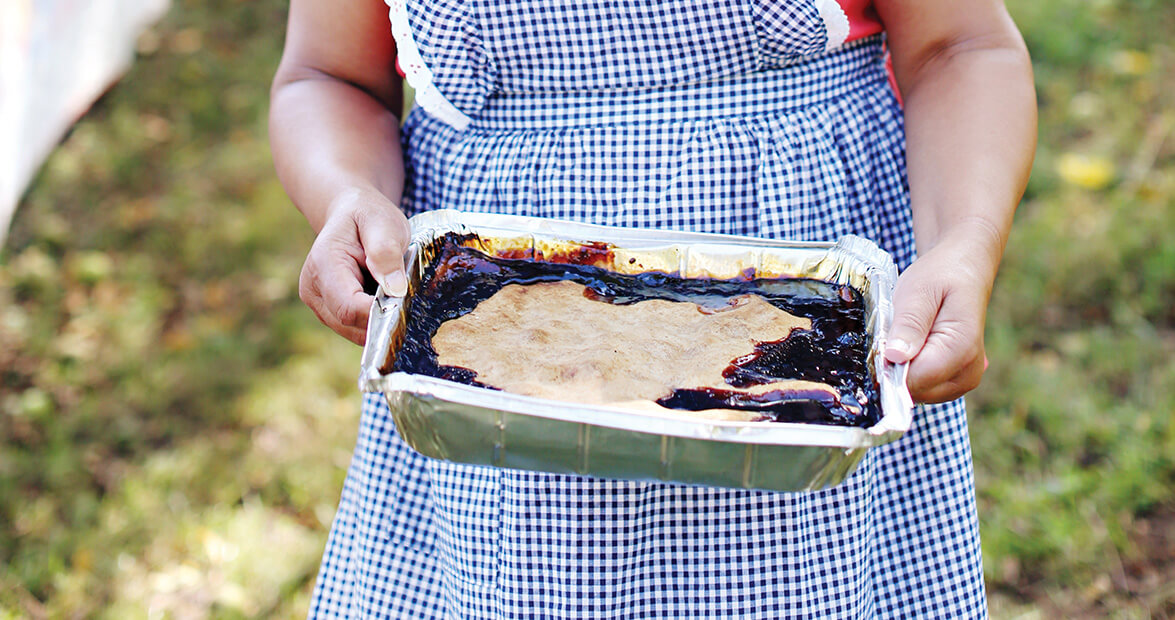 One cook’s cobbler is another cook’s sonker — but only if you happen to live in Surry or Wilkes counties. This deep-dish pie with the funny name appears to be peculiar to this part of the state.

“I had never heard of a sonker until here,” says Carmen Long, who has worked in Surry County for nine years as a North Carolina Cooperative Extension Agent in Family and Consumer Services. Before that, Long worked for 17 years in Alleghany County, the next county to the west, and specifically in the town of Sparta.

Had she ever heard of sonker in Sparta — just 33 miles from Surry’s county seat, Dobson? “No. Never,” Long says.

Although much debated, sonker is a deep-dish pie, juicier than cobbler, and typically served in a rectangular baking dish. It was a dessert large enough to feed a big family or farmhands who’d spent the day working in the fields. It was often baked in a bread pan that fit inside a wood-burning stove.

And that’s where the consensus ceases.

There’s debate about where the name came from. The late Cratis Williams, a special assistant to the chancellor at Appalachian State University, grew up eating sonker in an eastern Kentucky community settled by people from Wilkes and Surry counties. Williams wrote the introduction to a pamphlet of sonker recipes that the Surry County Historical Society published in 1980 — the first year they held the annual Sonker Festival. He wrote that the word “sonker” descended from a Scottish word for a small, grassy knoll that could be used as a seat, and later was used to describe a straw saddle.

“I suspect,” Williams wrote, “that the appearance of the irregularly shaped piece of dough used in the pie suggested a grass saddle to some imaginative cook and the name of the pie came into being.”

Others suggest that the name stems from a twisted pronunciation of “sunk,” because the dough was sunk down on top of the fruit. Regardless of its origins, the name didn’t catch on in North Carolina beyond these rural counties, north and west of Winston-Salem.

But even in this bastion of sonker, the dessert defies definition. Almost any kind of fruit can be used — strawberry, blueberry, blackberry, raspberry, cherry, peach, dewberry — as well as a vegetable, or two: Rhubarb works well, and one of the most popular varieties is sweet potato.

The debate continues when it comes to the crust. Some sonker recipes call for lining the bottom of a rectangular baking dish with pastry. Others say only to line the sides. Many specify a lattice-work crust on the top. Some have a layer of pastry in the middle. One recipe omits the crust, instead pouring a batter made of flour, sugar, and milk on top to bubble up between the fruit.

And then there is the “dip,” a sweet, thickened milk flavored with vanilla extract or spices, such as cinnamon or allspice. It is most often served alongside the sweet potato sonker. “There’s no two families who have the same recipe for the dip,” says Annette Ayers, a Surry County native and president of the historical society that runs the annual Sonker Festival in Lowgap. 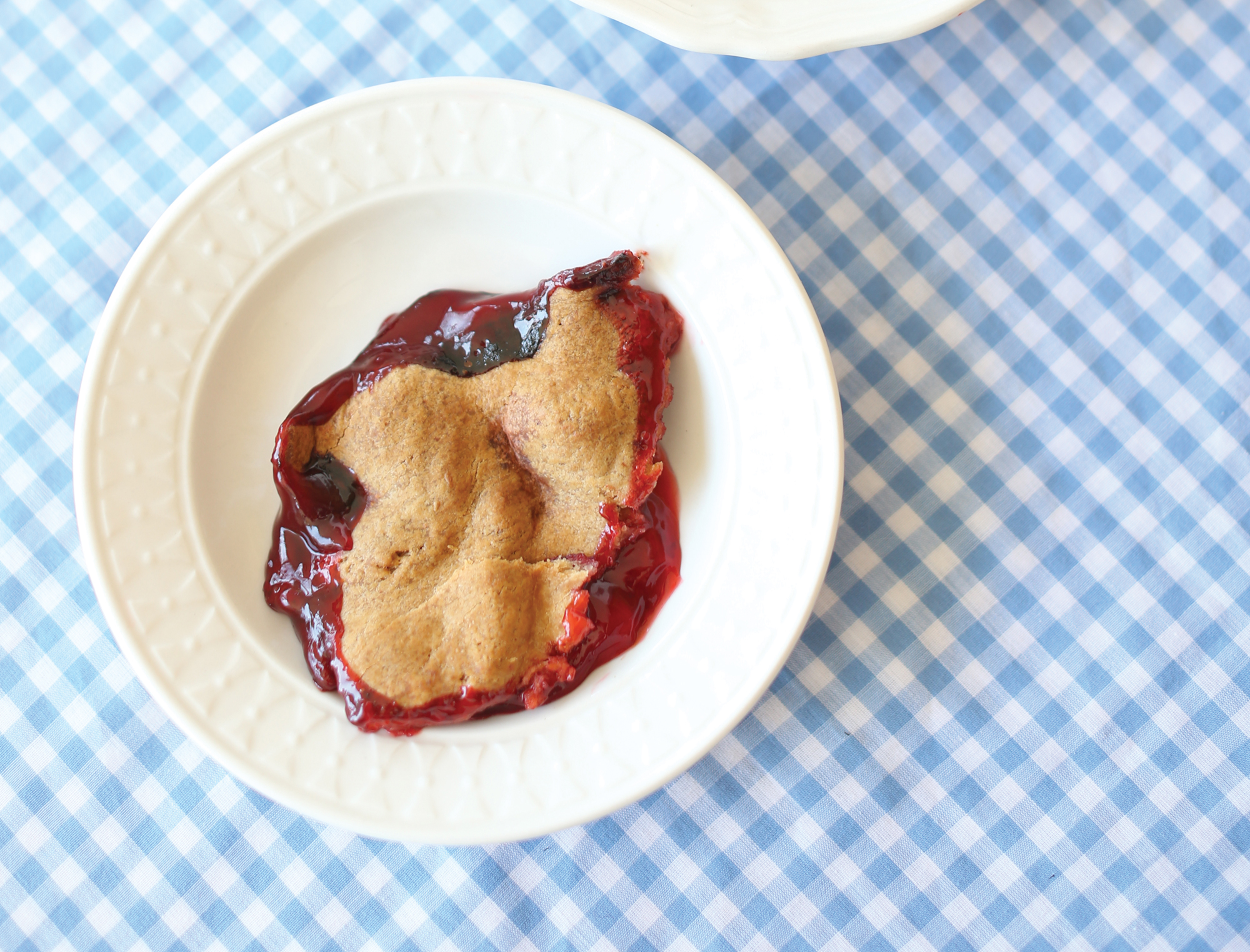 The sonker differences continue from family to family.

Emma Jean Tucker, 70, grew up in Mount Airy and helps organize the Sonker Festival. She says that her family called all deep-dish fruit pies cobblers and only used sonker to describe the sweet potato kind, which was the only one served with dip. “Some people pour it over any sonker,” Tucker says.

Over in Siloam, an unincorporated area in southeastern Surry County, Mae Crissman, 88, only ever heard of sonker. “When we were growing up, I never heard cobbler mentioned,” says Crissman, who has spent her whole life here and lives on the same road as most of her family.

On a recent afternoon, Crissman and her 83-year-old sister, Geneva Mabe, were making a peach sonker to serve after a lunch of chicken stew.

The sisters’ sonker-making skills are very much in demand. Every February, the owner of Pine Hill Farm Supply pays them to make enough sonker to feed more than 100 people for his customer appreciation dinner. Copeland Ruritan volunteers make the dinner, and the sisters make the sonkers.

The women, both wearing blue aprons, work in tandem. Crissman empties peach halves from a quart of homemade canned peaches into a bowl. Mabe uses a biscuit cutter to chop up the peaches to a fine dice. Crissman adds a cup of sugar to the peaches as well as some of the peach juice and water. The peaches go into a pot and onto the stove, where Mabe watches them. 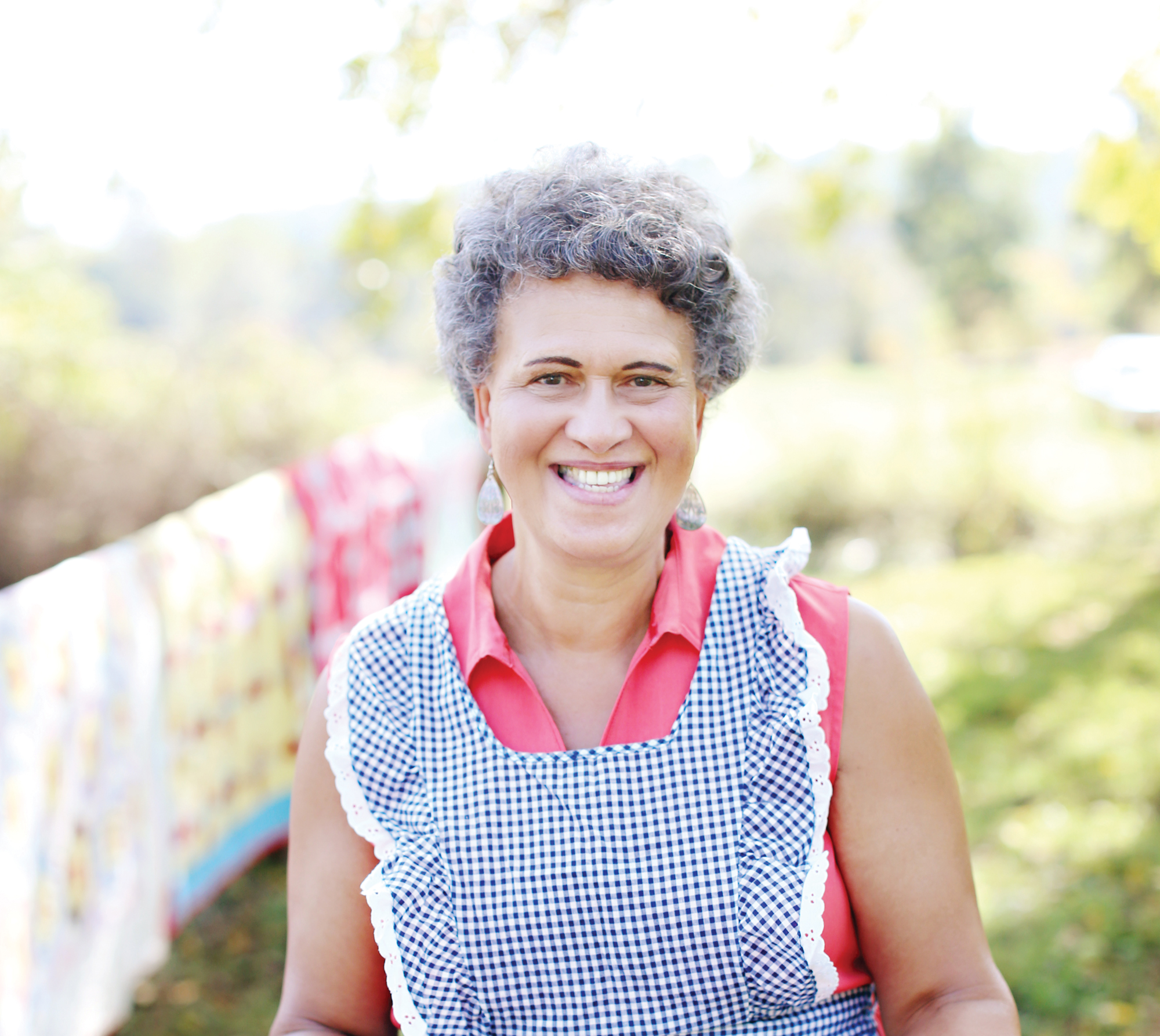 With a wooden rolling pin, Crissman rolls out the crust on a cutting board. She cuts wide slices of pastry to line the sides of a 9-by-13-inch glass baking dish, leaving the bottom of the dish bare. When the peaches are ready, she scoops them into the baking dish and then tops them with pastry, creating a lattice design. She scatters a handful of sugar on top, and Mabe dabs slices of butter as the finishing touch.

“This is the way our mama did it,” Mabe says.

Crissman’s daughter, Joy Hemmings, points out that the glass baking dish is a modern adaptation. From a low kitchen cupboard, Hemmings pulls out a battered, round aluminum “pudding pan,” four inches deep and nine inches across. This is what Crissman’s mother made her sonker in.

“They were wonderful,” Hemmings recalls.

But other women in the kitchen — Crissman’s daughter-in-law, Pat Crissman, and Marion Venable, a neighbor and authority on Surry County history — say their grandmothers always made their sonker in shallow, rectangular pans.

And, so it goes, each family in Surry and Wilkes counties has its own sonker story.