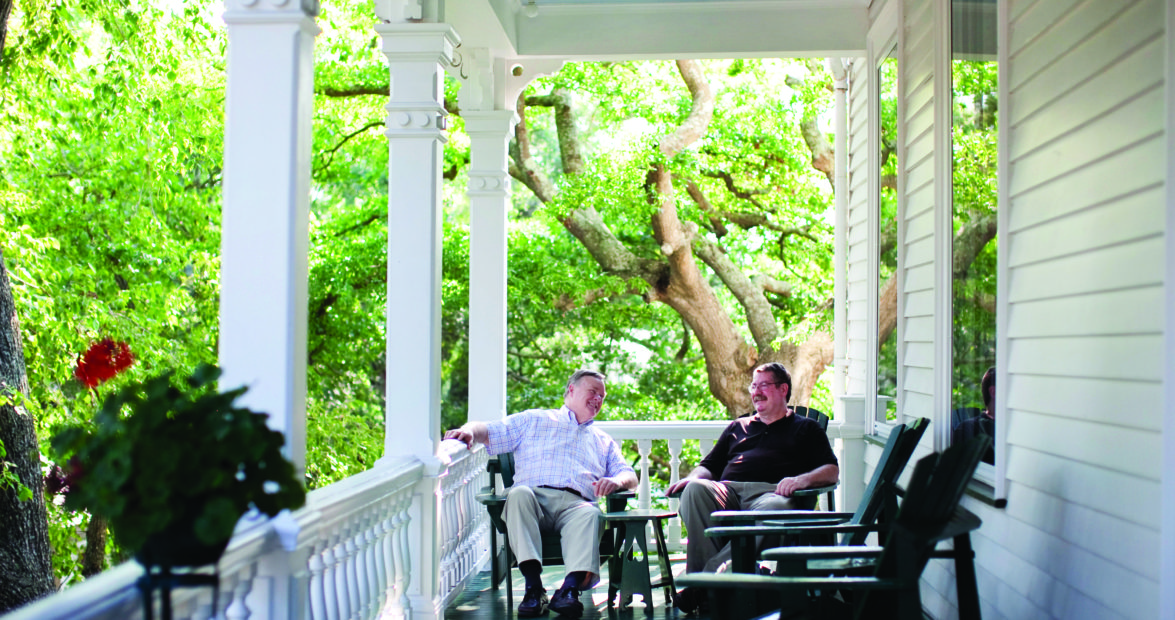 In my mind, I can see them. They slip in from the past. It’s early evening, near dark, and the whole family has drifted out of the house and settled in seats on the front porch. The father rubs his round belly. The mother wields a fly swatter. Three of the children jam into the swing, while the littlest ones climb onto laps. A dog thumps its tail on the floor. In the closing hours of the day, the family will take in the night air and let supper settle. They will talk some, perhaps sing or tell tales, and they’ll catch up on the latest with any neighbors who happen by.

Let your imagination wander back several decades — to the 1930s, say, or the ’20s, or earlier — and you’ll see them, too: the whole crowd, all of them collected on the front porch to while away the time before sleep. Same as last night. Same as tomorrow night. They have no television and likely no radio. Certainly no Internet, no portable electronics. To get what passes for entertainment, they have that covered stretch between the house and the yard, a place not in and not out, somewhere to go without having to go anywhere.

We can see them, but only from a vague distance. Most of the porch people have left us. And I wonder: Did they take simpler times with them? Did they carry away the notion of filling the day’s slow hours by simply sitting and letting the world breathe?

“You have to kind of live it,” says Chuck Pennington, co-owner of The Verandas bed and breakfast in Wilmington’s Historic District. The 8,500-square-foot Italianate house has the perfect front porch — a high, wide expanse equipped with wicker chairs behind a white-picket railing. The place invites guests to return to those long-ago nights of porch life.

“It’s just a total life-enriching kind of experience,” Pennington says. “You sit and stop. You don’t have the BlackBerry. You don’t have 30 million emails. It’s a quality of life that people have lost.”

He’s right. People stay indoors now, near walls of wired components and flashing blue screens. These days, we escape by looking in, not out.

Except for a few souls who haven’t given up on the front porch.

There’s this old man I see when I ride my bicycle out on the coast roads of Carteret County. He sits in a little chair beside the storm door of a small, white house along N.C. Highway 12 on Cedar Island. Over the years, we’ve kind of gotten to know each other — or at least I think he recognizes me as I pedal by, tired and sweaty. He waves, and so do I. I shout a greeting, and I hear his in return. He keeps sitting, and I keep riding.

Of course, the old man might not distinguish me from anybody else. Maybe he’s the most neighborly man on the outer reaches of Carteret County, the grand greeter of Cedar Island, and he occupies his front-porch throne and raises a friendly hand toward everybody, foreign or familiar, on two wheels or four.

Then there is Shawn Johnson, a 17-year-old who spends time on the front porch of his aunt’s house on Wooster Street in Wilmington. I found him out there one day, sitting alone, sunk into a patio chair. He held a cell phone, which he didn’t check — no calls, no text messages. He had his feet reared high on the metal railing, the toes of his sneakers poking over the edge.

“I’d rather be outside to feel the air and see people, see how things have changed,” he said, sounding like the youngest old man I’d ever met. “We’ve been so occupied with technology and stuff. I think we need to have some outside time, to get away from some things. You can be more in tune with a conversation outside than you can inside.”

The house once belonged to Shawn’s grandmother, who is gone now. Shawn remembers all the time she spent on her porch, watching traffic roll toward the Cape Fear River and visiting with anyone who came along on foot. Shawn has made that his way, too.

“Sometimes, you’ve got to get out and talk to somebody, look around,” he said. “It kind of relieves your stress, lets you think about things. I guess you could think in the house. I’d rather think outside.”

Shawn would fit right in with my parents. They live in Clinton, the seat of Sampson County, and after supper they often take to the green rocking chairs on their front porch. From there, they survey the low-key scene: a neighbor mows the lawn, another neighbor walks a dog, still another cruises past on the way to who knows where. Over there, a man pulls weeds on his surgically repaired knees. Here comes a man moving with the aid of a walker, then a mother and daughter lost in conversation, then a woman striding a power pace.

My parents watch the routine from their perch on the porch. They say hey to everybody within earshot, and those who pass say hey back. (In Clinton, no one says “hello” unless they’re answering a telephone.) Folks drift away from the street and up to the porch to trade news: who’s sick and who’s on the mend, who’s got a new baby and who’s got a new car, and it’ll soon be time for collards. Everybody agrees: We sure could use a good rain.

This is old-style social networking, a throwback to the pre-computer age, when families made a habit out of doing nothing special. They just sat on the porch and greeted folks one passerby at a time. These days, that’s pretty special.

We have a picture of my older brother on that porch. Somebody snapped it years ago, when he took a trip up from Florida to visit my parents. We forgot about the photo until March of this year, when we found it in his briefcase, three days after he died of a heart attack that came without a hint of warning. In the picture, Nick sits in one of the green rockers while wearing a baseball cap and shorts. He gives the lens his self-satisfied grin. He appears happy. It was the last time he came home.

My own front porch is just a stoop, a puny concrete pad rimmed with bricks. It makes my house look less like a box, but the porch is too small, not as big as a minute. If I put a rocking chair out there, I’d tumble onto the lawn.

Clearly, the contractor who built the houses on my street carried no nostalgia for those long-ago Carolina nights when families waddled away from their supper tables and headed for the front porch, everybody with a sweaty glass of tea or a plate heavy with pound cake. Perhaps someone would bring a guitar, someone else a rolled newspaper for mosquitoes. And there they would sit, the whole bunch rowed up on the porch, everyone lazy and immobile, stuffed with fried chicken and creamed potatoes, biscuits and beans.
They would talk low, telling jokes or stories or planning the next day’s work in the fields. Or maybe they would just sit silently and take in the night — listen to the breeze in the leaves and the chirp and whir of a million insects coming alive on the dark ground beneath a star-speckled sky.

I can see the people now — those from long ago up on a big front porch alongside Chuck Pennington, Shawn Johnson, and my parents. There’s the old man from Cedar Island. There’s my brother. They cross their legs at the ankles and stir the air with paper fans from a funeral home. The porch swing creaks and groans. They can smell tomorrow’s rain.

Finally, when the bugs get too hungry or the humidity too thick, everybody rises, slow and sated, and one by one they leave the front porch and wander inside, ready for sleep.