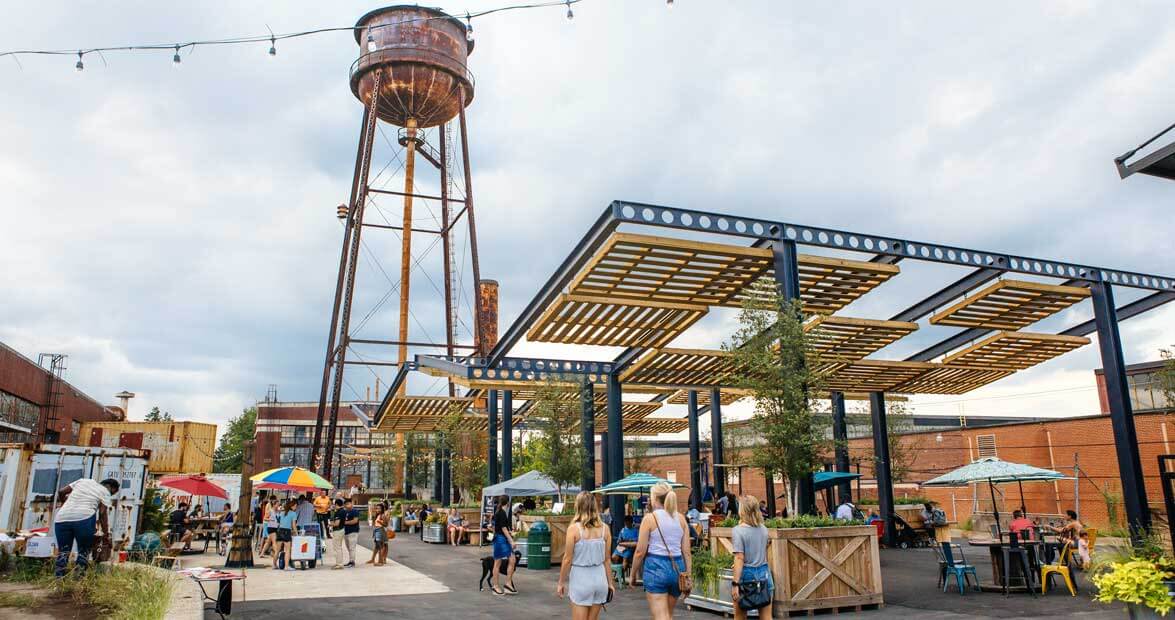 For a very long time, there was a large, impenetrable chunk of land a mile north of Uptown, surrounded by barbed wire fencing, full of long, dark, cavernous buildings constructed of steel, wood, and brick. In the 1920s, Henry Ford built Model T’s inside the oldest building, which still stands. Then, later, the Army built more warehouses, blacked out the windows, and stored munitions here during World War II, installing special lighting and wooden block flooring to keep a burst bulb or a dropped explosive from, you know, blowing up the whole place. Later, they built Hercules missiles here. Most recently, Eckerd Corporation and Rite Aid used it as a distribution center. But after that tenant left in 2016, the place sat empty. Even before that, it was a forgotten-about expanse the size of 46 city blocks. It was dormant, as the rest of Charlotte rose up to the south.

But when Prism Supply was looking for a place to show off its motorcycles, the owner, Jake Hindes, talked to the new landlords at the place, which had been renamed Camp North End. Sure, they said, you can go into the spot where the Ford assembly line used to be. 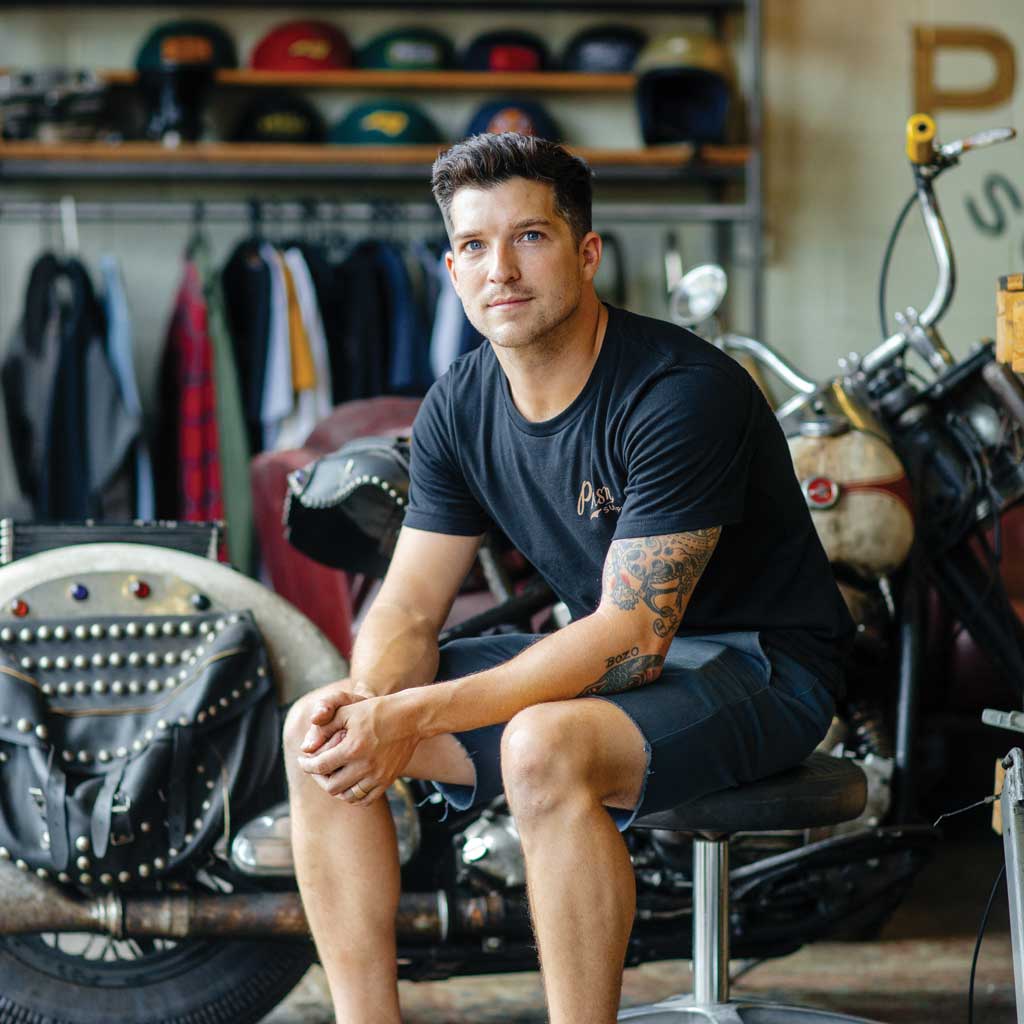 Jake Hindes is the owner of Prism Supply in Camp North End. photograph by Tim Robison

And so a very large motorcycle show fit into a single corner of the vast building, tiny in context. By this time, Jake had already decided to move his whole business here. There was nothing else like it in Charlotte. 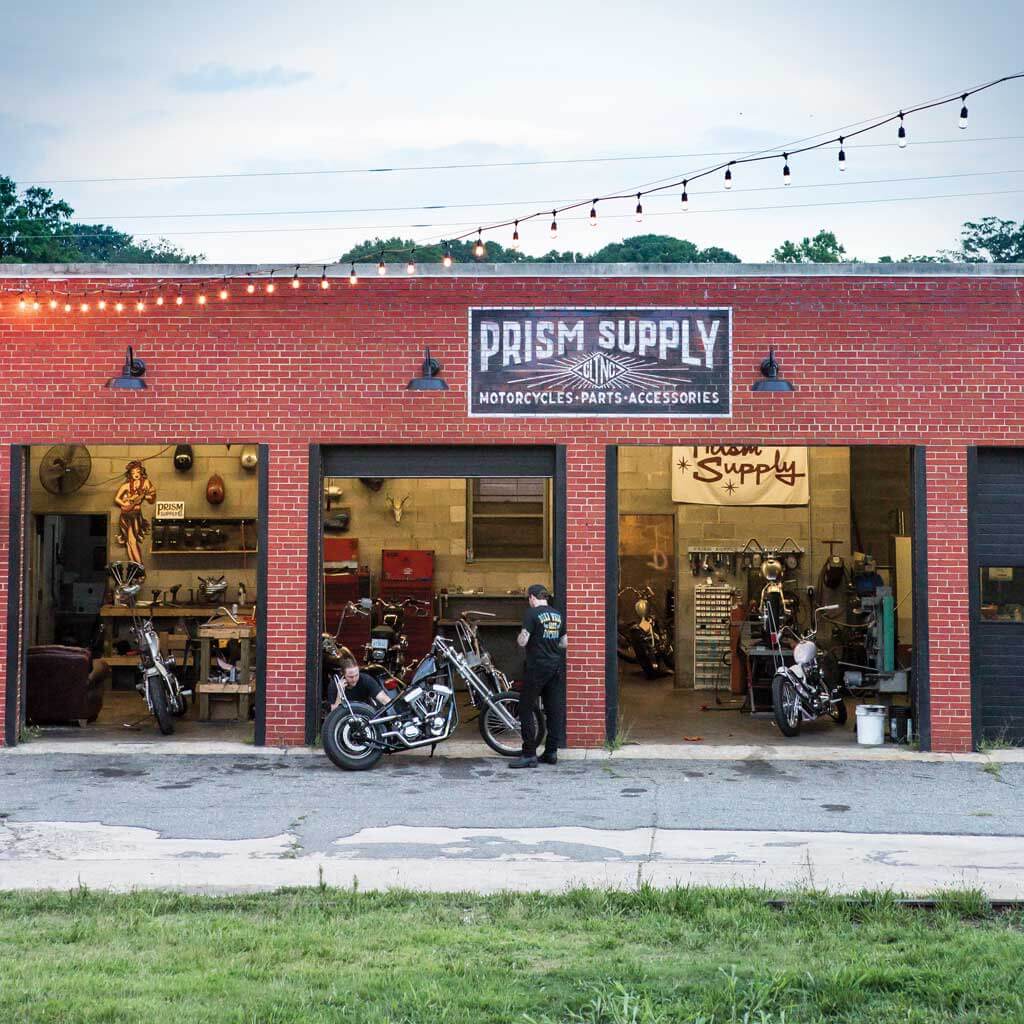 That’s the sort of story that keeps happening here, a mile north of Trade and Tryon, where the skyscrapers of Uptown are still close enough to see their individual windows. Camp North End is a work in progress. The first five years, explains Varian Shrum, the community manager, are about getting small businesses in place and people back on the property. Already, there’s a co-working space, a coffee roaster, a hair salon, an incubator for black-owned businesses, and a small group of Airstream trailers that function as tiny offices. Goodyear Arts, the nomadic gallery space that previously took up free residence in soon-to-be-demolished buildings all over town, has found a long-term (and free) home here. 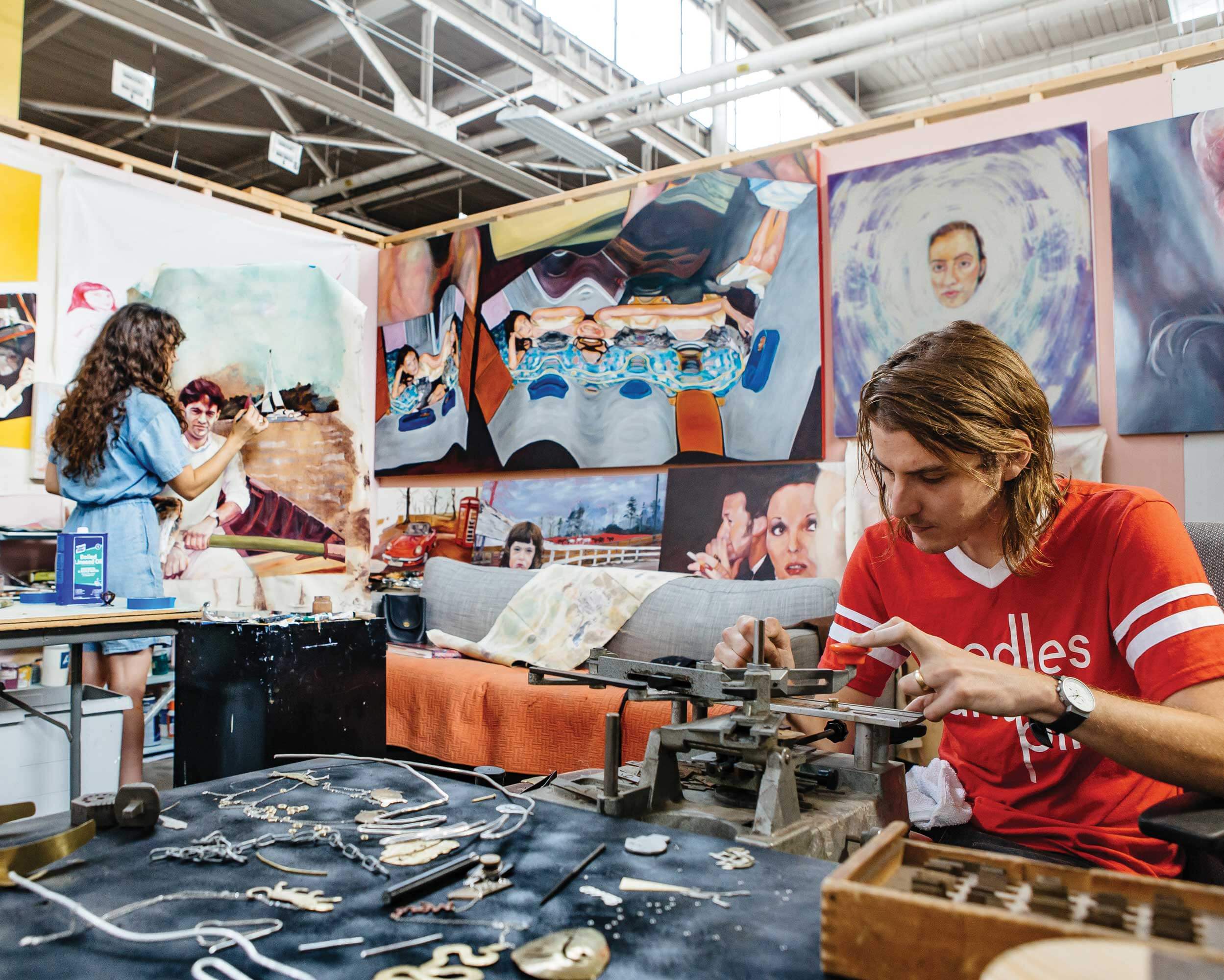 Goodyear Arts is open to artists to both create new pieces and show off what they’ve made. photograph by Tim Robison

Everything is within view of a tall, industrial water tower and a large boiler house with the boilers still in place. That equipment is meant for gawking at now, not heating. 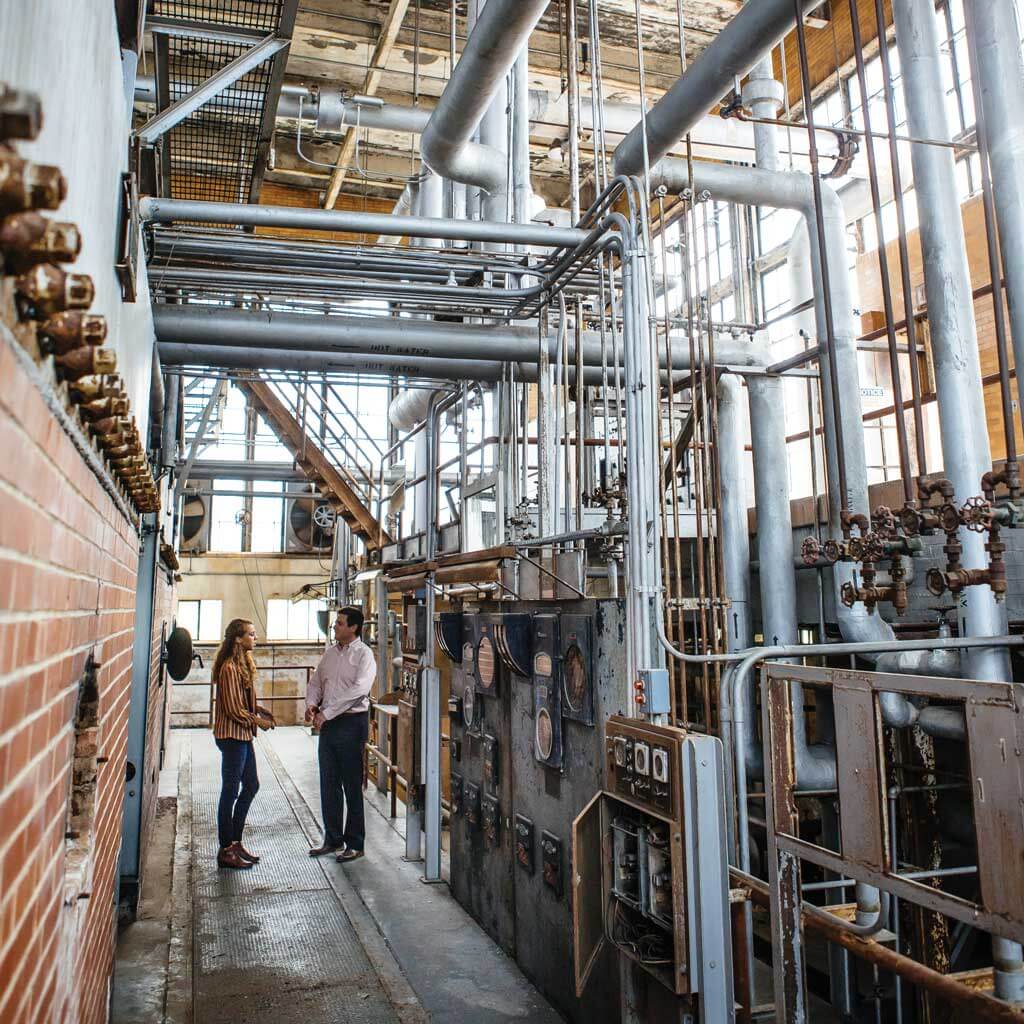 The old boilers are still in place at Camp North End, although the building that houses them is off-limits to all but employees. photograph by Tim Robison

As businesses grow, they can move into larger and larger spaces without having to leave, because here, there is nothing but room.

The developer is cutting holes into buildings so city streets can run through, making new pathways for people, bicycles, and cars.

For such a large space, there are meaningful details everywhere. The murals on the doors of the old Ford factory are painted by high school students and nationally showing artists. There’s a courtyard where you can relax beneath a large shade structure created from steel and old pallets, surrounded by shipping containers. People come to use the Wi-Fi and work, or race drones, or listen to music, or take part in an art workshop, or take a dance class, all in the shadow of a factory that’s sitting empty, waiting to be used. “There are old buildings in Charlotte, but they don’t create a place,” Varian says. “Here, you can be surrounded by them.”

The point, says Damon Hemmerdinger, who bought and developed Camp North End, is that people are asking for this sort of thing in Charlotte. He explains this as he walks through an old Army warehouse, raising his voice over the saws, drills, and heavy equipment giving it a facelift. Durham has the American Tobacco Campus. Greensboro has Revolution Mill. Now, Charlotte has this, and “you just can’t get this in Charlotte,” he says. Damon admits that his family’s company, ATCO, bought this property for a low price, which means that he can be slow and deliberate in building it out over 20 years. Less debt means more control.

So the freestanding restaurant will come later; for now, a team of five munching goats keeps the kudzu at bay, and construction workers hammer away at the place where offices will go, and you can still hear the cabinetmakers and plastic recyclers who occupy the industrial part of the property. Jake Hindes, stepping out from his garage, where his employees are turning wrenches and working on custom motorcycles, explains why he’s here. “It feels a lot more artistic,” he says. “Everything you need is in-house.”