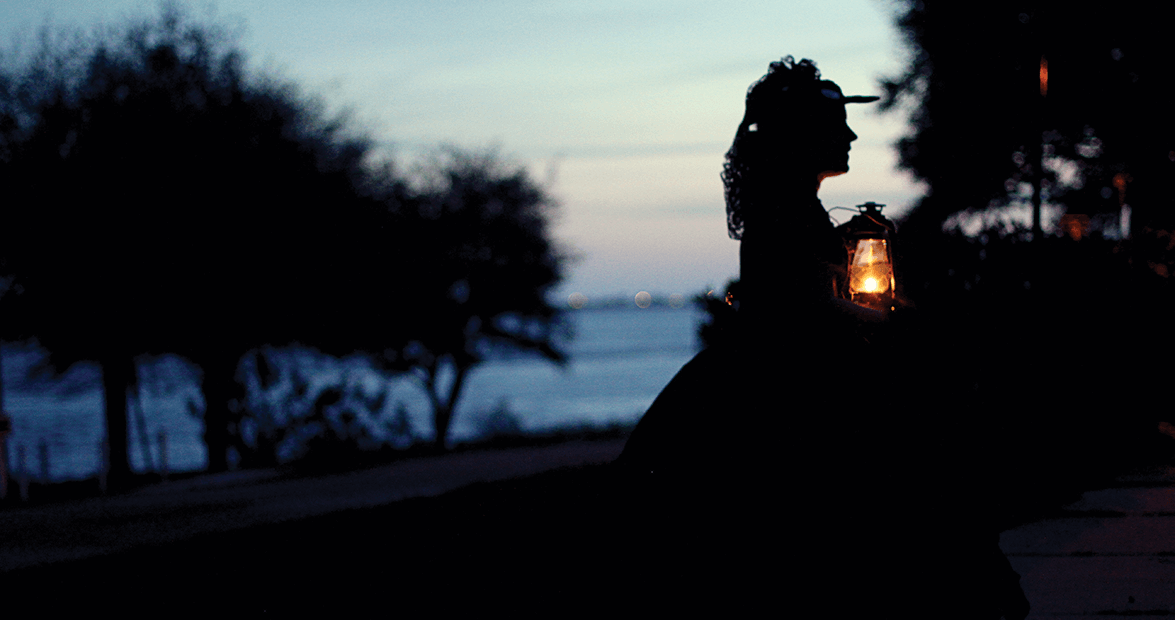 Ten years ago, in the middle of the night, a woman wandered alone through the streets of downtown Southport. Strolling past Civil War-era wrought iron gates and looming oaks, she was the perfect formula for a scary story — a whole town’s worth of stories, it turns out.

Katie Compton doesn’t consider herself a paranormal person, but then again, buying a hoop skirt from the local flea market and starting your own ghost tour isn’t, per se, normal.

After graduating college with a degree in Southern antebellum history and oral interpretation of Southern literature and culture, and thinking better of selling plasma or making dog treats for a living (her dog wouldn’t even sniff the biscuits), Compton surrendered to a sleepless night. She threw on jeans and a T-shirt, and set out into the streets of her hometown to investigate the moonlit setting and map out a haunted route.

Today, the Old South Tour Company draws an average of 50 people a night for its Walk by Lantern Light tour. And as all seasoned tourists know, a great tour guide is everything — though the woman decked out in the black mourning gown would credit the tour’s popularity to Southport’s rich history.

“I let the graveyard speak for itself,” Compton says. “It’s creepy Southern gothic at its finest.”

Even so, Compton recognizes that storytelling — balancing historical content and town folklore — is an art. As a historian, Compton uses primary documents for her tour research, gleaning much of her material from the North Carolina Room in the state archives. But she admits that her best resource is the town residents who sit on their porches. They are a crucial part of the oral tradition, Compton says.

As a part of this tradition, ghost tours make history fun and accessible. “You get a 60-year-old history buff and his 12-year-old grandson who hates his social studies teacher to both be engaged.”

On most evenings, before Compton dons her signature gown and leaves for the nightly tour, she tucks in her 2-year-old son, William, and tells him a bedtime story. After it ends, a dramatic hush fills the room. William breaks the silence, echoing her tour-goers’ sentiments: “One more, Mommy,” he says. “Tell one more.”

Rachael Duane is the editorial assistant at Our State. She is a self-proclaimed scaredy-cat.

Ghost Hunters of Asheville
You’ve heard of ghost hunting, but have you operated an electromagnetic field meter and held a dowsing rod? For a hands-on ghost tour, meet at the Battery Park Book Exchange & Champagne Bar for the Downtown Spirits Tour. Or, venture through the haunted alleys of historic Montford during the Haunted Montford Stroll, which meets in front of the Nine Mile Restaurant — and hopefully, returns.
(828) 779-4868 or ghosthuntersofasheville.com.

The Haunted Housewives of New Bern
Meet the spirited female characters of New Bern’s historical district at 18 sites around town. Stops include theatrical performances in the New Bern Civic Theatre and a candlelight walk through Cedar Grove Cemetery. After the tour, head over to Agony Alley for kid-friendly games and activities at the historic Attmore-Oliver House.
(252) 638-8558 or newbernhistorical.org.