I first visited a Vollis Simpson whirligig years ago near dusk, and what memory and a single dim photo bring forward is what it felt like to look up. I was at Simpson’s old workshop, about 11 miles outside of Wilson. Beneath the darkening sky, the things were so big. The ones that were still there weren’t turning anymore; they were rusting and deteriorating. But they stood out against the twilight — static, looming, epic. 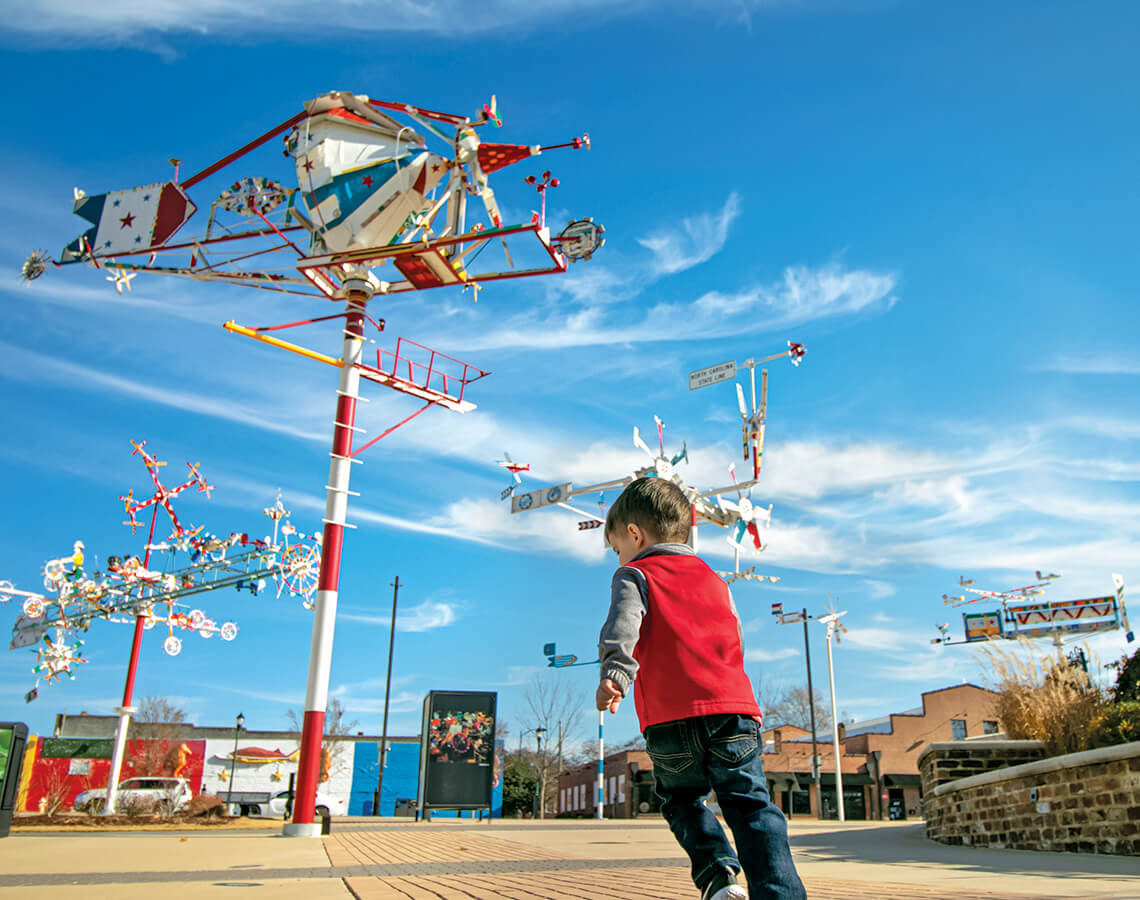 Children love to run and play beneath whirligigs like Time Machine, with its huge fiberglass cone. Many of the poles throughout the park once hoisted billboards and other road signs. photograph by ALEXANDRA BLAZEVICH

Not every skyline needs to be buildings or mountains. If it makes a mark against the sky, it’s a skyline. I haven’t forgotten that moment, nor have I forgotten my glimpse of the few whirligigs that were in various stages of restoration and installation at the then-unfinished Vollis Simpson Whirligig Park and Museum in downtown Wilson. 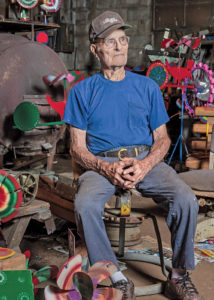 So you may imagine my delight when, during this time of Covid-19 — a time when museums are proscribed and parks are overrun and every block in our Raleigh neighborhood is tapped out and overvisited — a friend suggested a return trip to Wilson to see the whirligigs again. The park is outside, and with masks and social distancing, my wife, June, and I could actually spend a couple of hours in the sunshine, enjoying something together.

After an hour in the car, we pulled into Wilson on a chilly Saturday and parked by Casita Brewing Company, which, combined with several food trucks, promised sustenance later. We live on the edge of the Piedmont, and Wilson is the closest city in the Coastal Plain, which starts at the fall line — the border where rivers take their last tumble as the rocky hill country gives way to the softer, sandier geology nearing the shore. To find the boundary between the two, you can look at geological maps; you can seek waterfalls and rapids and old mills or their remains.

If you’re driving to the beach or taking a walk in this part of the state, at some point, you will lift your head and there will be Coastal Plain sky. The clouds above this flat country span a vastness that you don’t see anywhere else. Whether you’re looking at buttery yellow cloud tops vibrating against electric blue, diaphanous white puffs ranking away in a sweeping dot matrix, or continent-shaped gray masses that seem to cover entire counties, the even flatness of the Coastal Plain encourages you to raise your eyes.

On a long walk in Wilson once, I lifted my eyes above a tobacco field and saw a population of puffy cumulonimbus clouds that I was sure stretched to Canada. It was later that same day that I looked up and saw Simpson’s giant whirligig in the dusk, a three-story behemoth surrounded by trees at his old workplace.

That first whirligig experience was in 2015, and it came after I’d stopped for a bottle of soda pop in a Wilson convenience store across from a tobacco distribution hub. I told the clerk that I loved the way the air smelled. She narrowed her eyes: “I can’t tell if you’re being sarcastic,” she said. I assured her that I was not, and Amethyst — that was her name — briefly waxed lyrical about how good it smelled every now and then when they flavored the cherry cigars.

Talking to locals is, to me, the entire point of travel, so Amethyst and I chattered for some time, during which I learned about the custom of visiting Simpson’s former shop. An outsider artist who was nationally known for the gigantic sculptures he assembled from found materials and spare parts, Simpson died in 2013 at age 94, and the park that Wilson had designed to show off 30 of his whirligigs wouldn’t open until 2017. At that time, you could still drive into the hinterlands and see his old farm, with its moldering buildings and some of his whirligigs, still surrounded by trees and meadows.

Now, a few years later, the finished park is a place of astonishment. Spanning a city block, it comprises the requisite performance space and a pavilion so that you can get out of the sun. And there are explanatory panels telling you all about Simpson, and about Wilson, and about the whirligigs and their somewhat arbitrary names: Gunshot Bicycle Man, White Wind. But the point is the whirligigs, and the whirligigs are all you need.

Gigantic, sparkling whirligigs, mind you, that swing about in the wind, spinning like Ferris wheels, like bicycle tires, like enormous steel pinwheels. The wind was light, even delicate, so some of the larger wheels didn’t move. But not a single whirligig was completely still: On even the heaviest wheel, a glittering little metal propeller spun, rattling in the wind. Came a gust and the guy driving the Mule Train shook the reins, and the mules’ legs moved. Once in a while, the wind really picked up, and then, like a flock of birds, every whirligig seemed to inhale, cast about, and then slowly, slowly swing around so that it faced the wind. This was something like ballet, something like watching a murmuration of starlings, only gigantic and slow and made of industrial scraps. 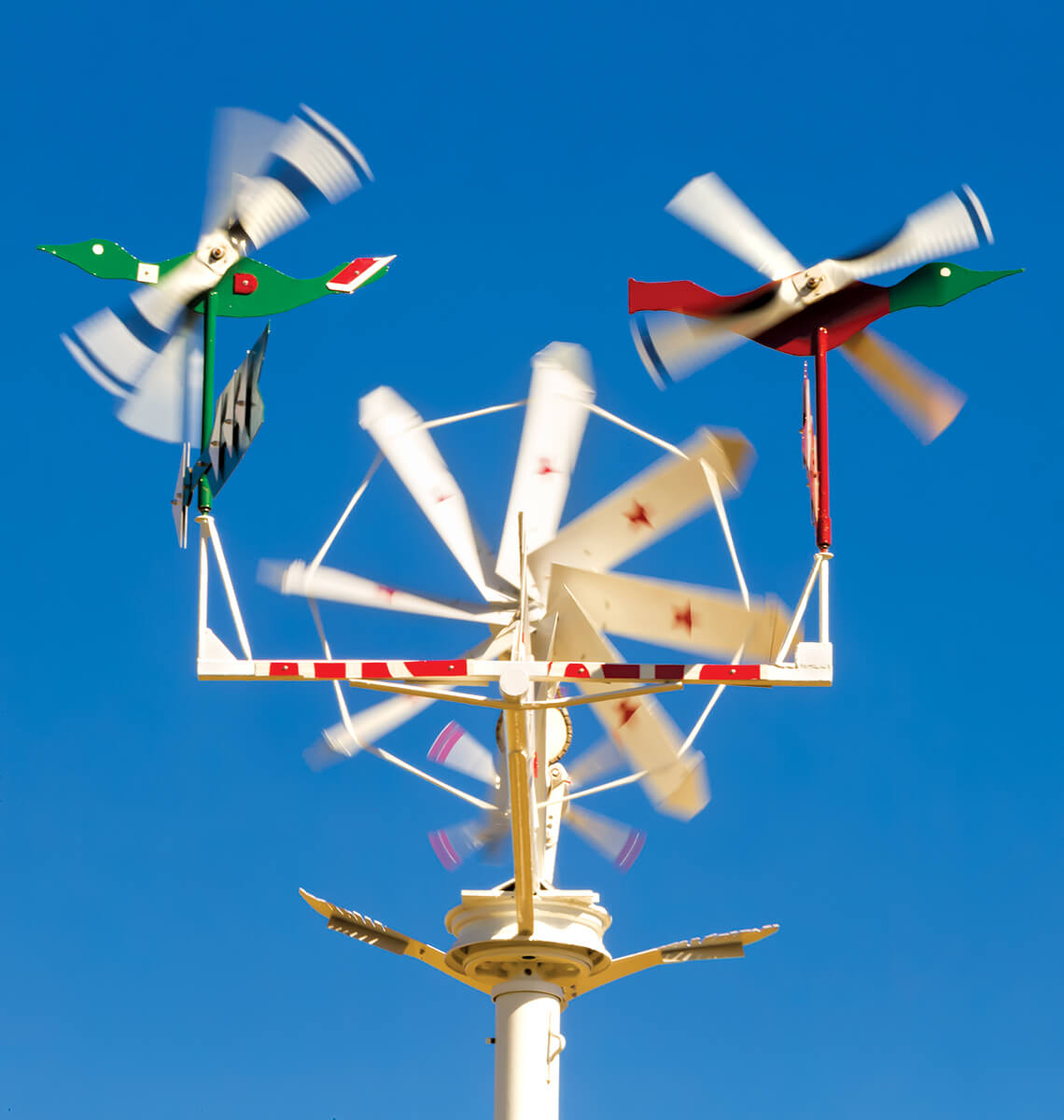 Simpson made lots of ducks with spinning wings. But he only made one with wings attached to springs and a sprocket connected to the fan blade, causing the wings to flap up and down. It’s on the back of this whirligig. photograph by JONATHAN FREDIN

Every whirligig has a detail, something delightful or bizarre. One has a spinning wheel powered entirely by silver diner milkshake cups. Another is made from a road sign indicating the North Carolina border. Green, blue, yellow, red; highway sign glitter, traffic cone sparkle. Watch for a while, and you’ll be delighted. Watch for longer, and you’ll be like a 7-year-old lost in the dust motes floating in a sunbeam. That’s better.

Beyond the whirligigs, the low buildings of Wilson march away, though across one street, an enormous, bright blue water tower provides a backdrop; in another direction stands an old rusting brown one. You begin to notice the roofs, the skylights, the shingles, the tar. You are looking around yourself, paying attention, observing your world in a new way — which is, of course, the telltale sign of successful art.