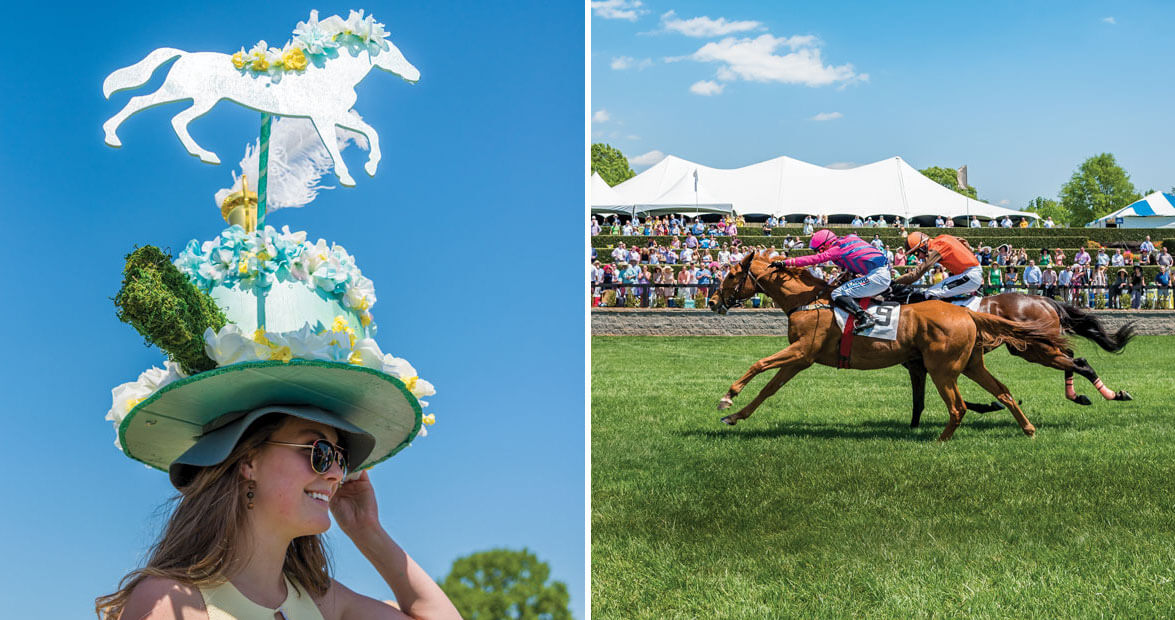 When the bugle sounds the “Call to Post,” jockeys steer their mounts to the starting line. The announcer’s staccato voice rises as thousands of brightly dressed spectators turn their attention to the track, sleek flutes of champagne and silver cups of mint julep raised in a toast to the start of the Queen’s Cup Steeplechase.

To enjoy this celebration in the town of Mineral Springs, you don’t need to know the storied tradition of the steeplechase — the first was a 1752 match between horsemen in Ireland, who raced cross-country between the tallest landmarks at the time: church steeples. Some 100 years later, after a track opened on the outskirts of Paris, Manet painted his famous panorama of horses racing and a fashionable crowd watching.

At North Carolina’s Brooklandwood Racecourse, the animals themselves are often an afterthought, an excuse for a daylong cocktail party. As founders Bill and Carrington Price put it, “The Queen’s Cup is a big tailgate party, and the horses are invited.” 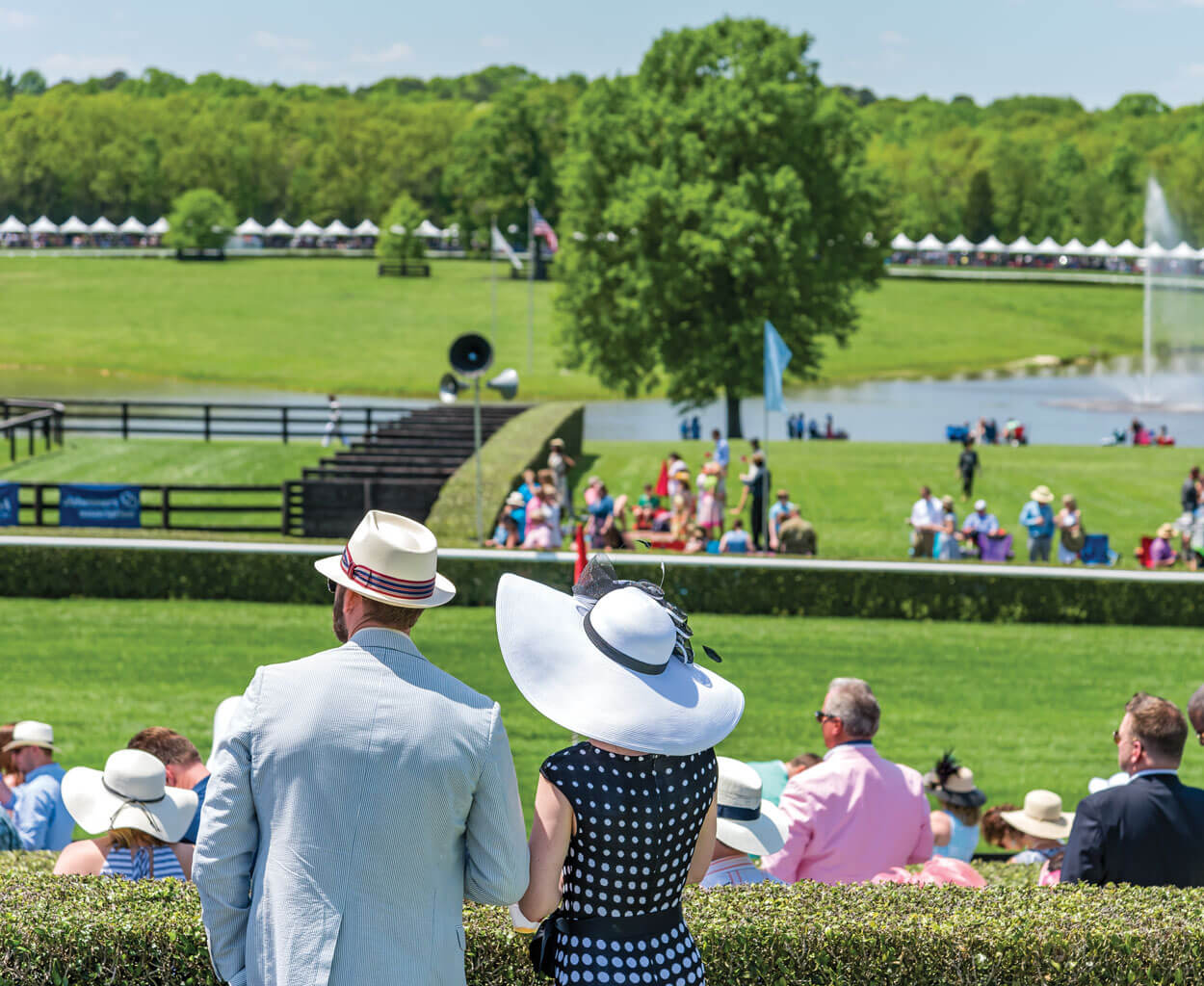 Member’s Hill provides the ultimate view of the track and the 70-acre infield. It’s also the best place to be seen by other race fans — so be sure to dress the part: seersucker for him, posh hat for her. photograph by Emily Chaplin and Chris Council

“Civilized” is how Stephanie Gretz describes the scene. “People behave themselves.”

Gretz, who with her husband was a founding member of the Queen’s Cup, watches the races from the exclusive Member’s Hill, a nine-acre berm with views of the entire track. Gretz buys a new outfit every year. Beginning in early March, she says, she recognizes “that look of desperation” on women at the mall as they search for the perfect dress and hat.

The races don’t start until 1:30 in the afternoon, but the entire day serves as a spectator sport. When Ashley Ireland walks in, people stare and take pictures. She’s wearing an enormous sea green hat, with artificial flowers festooning the brim and two prancing painted wooden horses tottering around on a spinning dowel up top. Ireland doesn’t know much about horse races, but she’s an expert at crafting. She spray-painted a lampshade and a circle of plywood for her unwieldy creation — winning the hat contest at her very first steeplechase.

Sean Colas and his wife, Jennifer, are horse enthusiasts who grew up in New Jersey and New York, respectively, watching the races at Meadowlands, Aqueduct, and Belmont. Now North Carolinians, for 12 years they’ve driven to the Queen’s Cup 20 miles southeast of Charlotte. 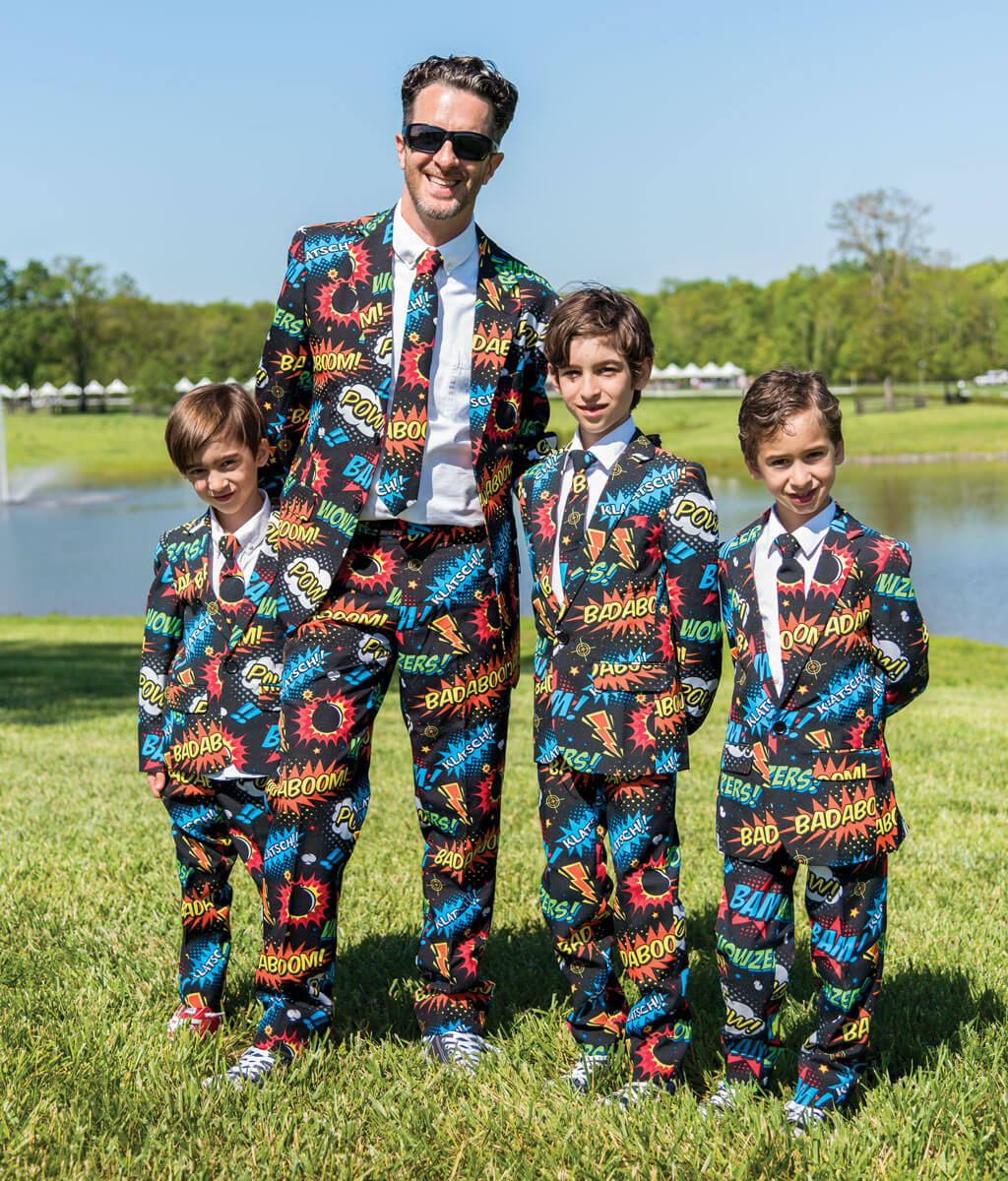 They spread a quilt near the track’s first turn, beneath a tall willow tree — “our tree,” as they think of it. They open beers, pull out baseball gloves and a Frisbee to entertain their three boys, and wait in the shade for the races to begin.

“For us, it’s more of a picnic-type atmosphere and there happen to be horses,” Sean says. “It’s an expensive endeavor over the years — new suits each year, the price of five admission tickets. But we love it.”

The racetrack, with lakes in the infield and lush woods surrounding the grounds, is tucked so seamlessly into the rolling countryside that it looks as if it’s always been there. Bill Price, who designed much of the course, raced as an amateur jockey in high school, and Carrington grew up going to steeplechases. When they moved to Charlotte, they were invited to “go to the races” and were excited — until they found out their host was taking them to a NASCAR race.

“For us, it’s more of a picnic-type atmosphere and there happen to be horses.”

After traveling to Tanglewood Park in Clemmons, Tryon, Southern Pines, and other towns to satisfy their passion for horse races, the Prices decided to start their own. The Queen’s Cup, which benefits the Alzheimer’s Association of Western North Carolina, opened on rented land in 1995. Five years later, it moved to its permanent location, most of which the Prices put into a conservation easement with the Catawba Lands Conservancy, preventing the property from ever being developed.

Several dozen horses compete for nearly $200,000 in purse money. Under North Carolina law, that’s all the money that’s supposed to change hands — betting on sports is illegal in the Tar Heel State. But you don’t have to look too hard to find a lot of “friendly wagers.” 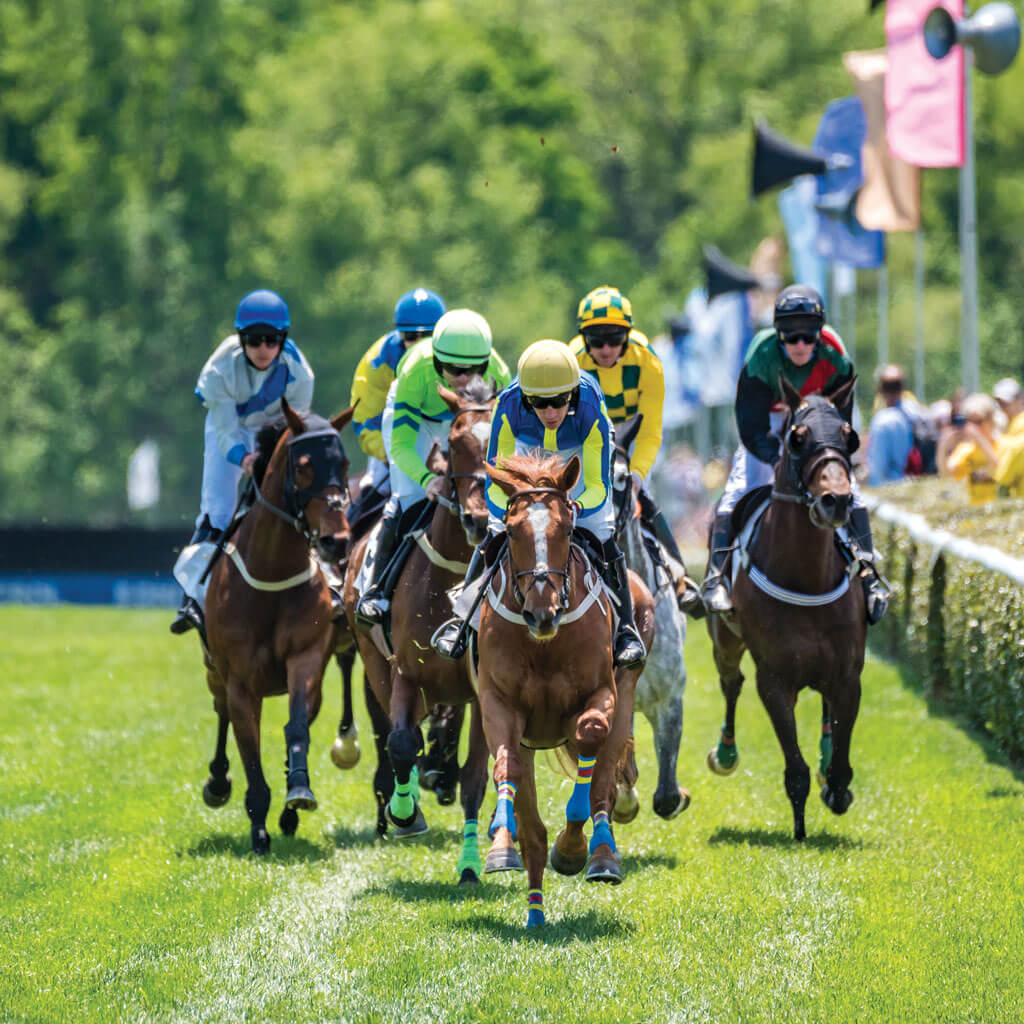 Over the years, the Queen’s Cup has attracted a few celebrities — among them, Princess Anne of Britain and novelist Dick Francis, former steeplechase jockey to Queen Elizabeth — but most of the more than 14,000 attendees come from in and around Charlotte.

When Shay and Meena Patel hear the announcer call the start of the second race — “The flag is raised … and they’re off!” — they rush to the fence. The horses appear to glide down the track as they round the first turn. They race neck-and-neck down the stretch, then sail into the air in front of the Patels’ rented tent, over one of six hurdles on the 2¼-mile course. Like “The Wave” traveling through the crowd at an indoor basketball game, cheers follow the horses as they sweep along the course and out of sight.

For Shay, the racing is the main draw. He and Meena grew up in England, home to the world’s most famous jumping race, the Grand National Steeplechase. They dress for the Queen’s Cup with a nod to their homeland: He sports a Union Jack bow tie; she wears a formal red fascinator. “I think it’s one of the most elegant events Charlotte has,” Meena says. “All of this is so English.” 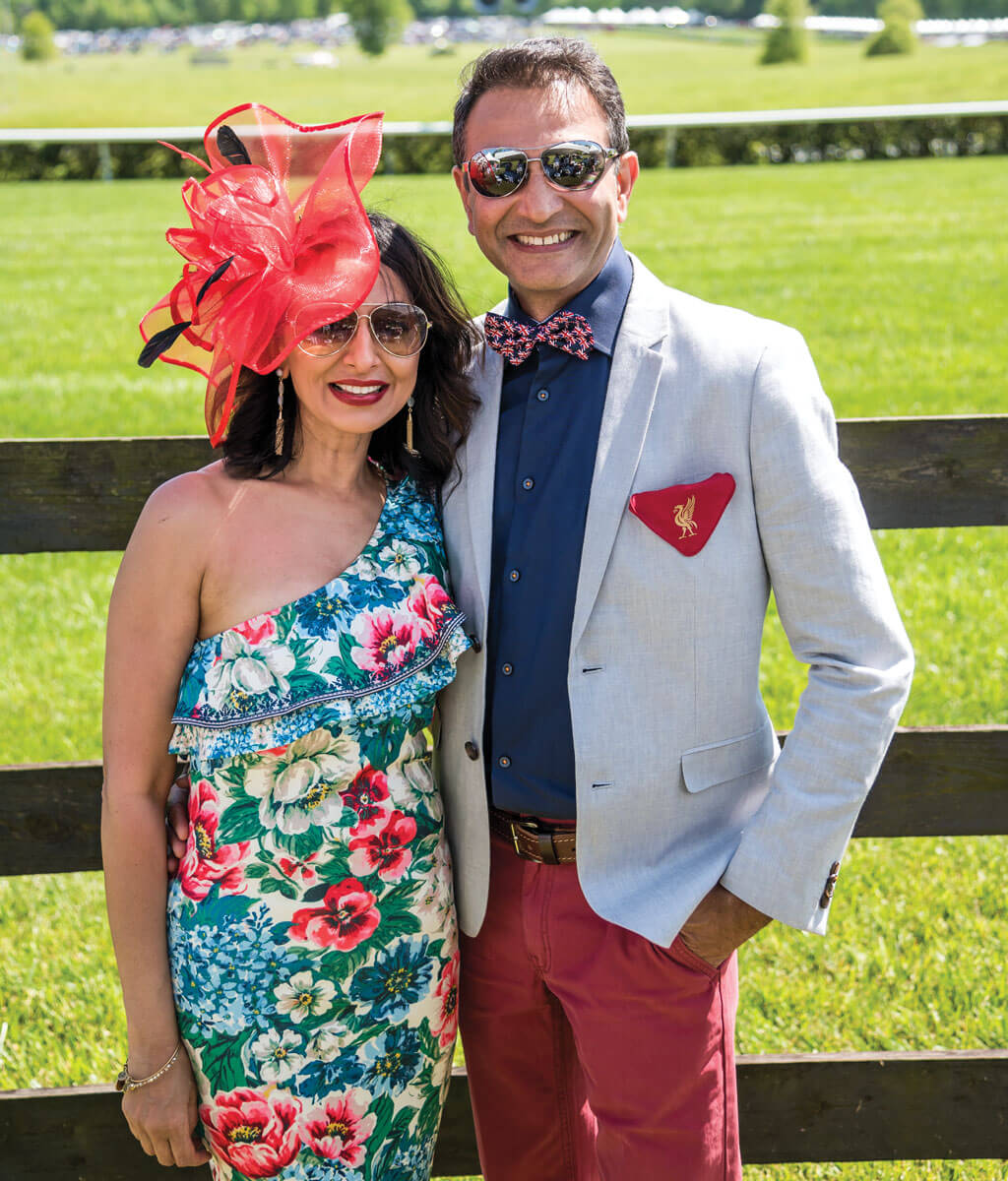 “Why go to England or the Kentucky Derby when we have this in our backyard?” asks Shay Patel, with his wife, Meena. photograph by Emily Chaplin and Chris Council

Nearby, a group of passionate horse riders call themselves “The Unbridled Guys.” The entrance to their tent includes a collection of riding boots with potted impatiens sprouting from the tops. The only downside to the steeplechase, Renae McGuire says, is that it comes only once a year (the last Saturday in April, rain or shine).

“I love the camaraderie here and the way the community comes together,” she says.

“Once you come, it’s hard not to come back,” her friend Cheryl Herberg agrees. She says that she’s surprised at how many people don’t know about the Queen’s Cup. “It’s probably the best-kept secret in the state.”