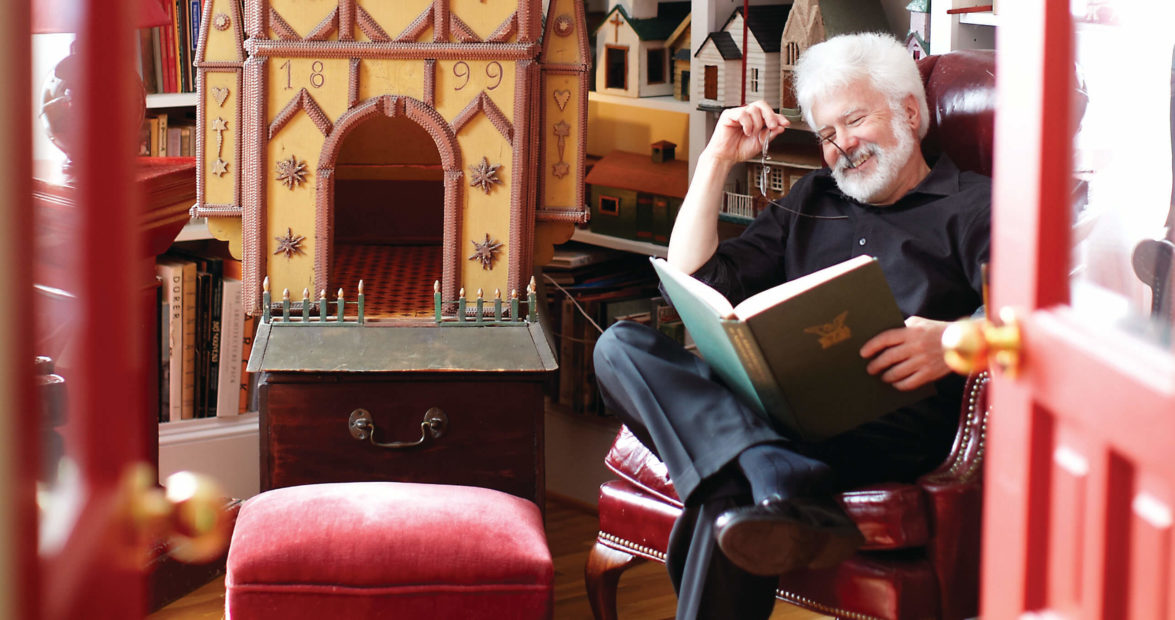 W. Steven Burke owns hundreds and hundreds of houses. He also owns a number of buildings, many of which you may have seen before and not even known that Steven Burke owns them. The Empire State Building, for instance: he owns that. The Home Moravian Church in Winston-Salem is also his. He owns churches, banks, castles, factories, entire city blocks. His real estate holdings are vast, multifarious, practically endless; he himself may not know all he owns. One can imagine him surveying his kingdom, imagine him touring it, making sure it’s safe and secure, only to come upon a lighthouse, say, or an ice rink, or a diner, or something else that causes him to pause briefly and wonder, Now where did that come from? But he’d only wonder for a moment, because in his mind he has a list of everything within his purview. Oh yes, he might think, I remember where that came from now: eBay. eBay is where much of his property derives, as well as from friendly antique dealers who know what he likes.

Burke possesses all these things and more, but he is no tycoon, nor is he an entrepreneurial magnate. He probably has less in common with Donald Trump than anybody on the planet. The home he lives in is modest but elegant. He’s president and CEO of the Biofuels Center of North Carolina. The world he owns — the world he has, in fact, created — is a miniature one. The houses, churches, and buildings are one-hundredth the size of their real world counterparts. In fact, were his holdings to occupy the space their authentic inspirations do, North Carolina would have another entire town on its hands. We could call it Burkeville. Or Burkesboro. Burkington? As it is, though, his collection fits snugly within his house.

He — W. Steven Burke — is an appropriately short man with warm, piercing hazel eyes, a thick mop of purely white hair, and a well-trimmed beard to match; he’s been alive for six decades or so. He’s a dapper fellow, unfailingly polite, extremely articulate, and immensely well-read. He fully justifies the ‘W’ before his name. To do that, to have the abbreviation at the beginning rather than in the middle, is a gutsy move, but he pulls it off without breaking a sweat. It is perhaps this same bravura that turned him not only into a collector, but the collector: a collector of things that have never been collected before. Things which, before he began amassing them in 1985, had no collective name at all.

Burke calls them “American Folk Art Buildings.” This works well enough, as long as the word building may also be used to describe Ferris wheels, lighthouses, windmills, and roller coasters. A clunkier way to describe what he has brought together would be diminutive, potentially habitable three-dimensional art things — only potentially habitable because you’d have to be just shy of an inch tall to inhabit most of them. But many are built with such precision of detail and form, inside and out, that a tiny, tiny person would be right at home.

Like all great collections, in the beginning there was only one. In 1985, flush with an almost $200 tax refund check, Burke bought his first diminutive building. He liked it enough, and when he saw another at the Woman’s Club of Raleigh Antiques Show three months later — a beautiful little red American barn — he bought that, too.

And this is where the mystery begins. It’s a question even Burke can’t really answer: the “why” of it. Not why he bought the third or the fourth or even the fifth Folk Art building. The question isn’t even, why didn’t he stop at three or four or five? Or 25 or 30? Or, say, 257? The question is, what compels a normal man to maintain what may be arguably termed an obsession with these small, beautifully rendered historical and evocative objects?

Not even Burke knows. He can easily explain his lifelong interest in architecture. And yes, there in his portable, paperless brain, an encyclopedia of architectural knowledge resides. At one point during a visit, he easily rattled off a series of English architectural styles, from Gothic to Georgian. In movies that feature an English country house, Burke can tell his partner, Randy Campbell, where in England the country house is.

Burke also believes people have an inherent interest in making big things small. From childhood, when we play with toy cars and trains, Army men and dolls, airplane models and Betty Crocker kitchens (and remember those volcanoes we made for science class?) — realistic mini-creations absorb us. Which is true enough. But that still doesn’t explain why Burke didn’t stop buying his houses when he came to a big round number. Say 500. Even Steven, who has an answer for every other question, doesn’t know the answer to this. Why aren’t 500 houses — or, say, 600 — enough?

It may be because the question itself is wrong. Enough is not a word a collector understands. A love of things, or some thing, however that love manifests itself, is not something that can be quantified. It is a blessing and a curse. A blessing because of how wonderful it must be to love something so much that you can’t have enough of it; a curse because no matter how small the thing you collect is, you never stop loving it, and adding more and more of it takes up space. A lot of it.

Between 1985 and 1992, Burke bought about 50 houses. By then he had so many, he had to build a real house for them. A house where he and Campbell could live comfortably as well, but Burke designed his house — designed it himself — with his houses in mind. He built a home, in other words, to house his houses. Now they are everywhere. You can’t turn around without seeing one, or bumping into one, in every room, against every wall, and on almost every bookshelf. He’s built two other, smaller houses since, in the yard behind the main house; one is an office, in which a hundred or so houses are, and another is nothing more than a storage unit for the remainder of the collection (not counting the ones that ended up in the attic).

At this writing, he has about 950 American Folk Art Buildings.

Unlike paintings, or sculptures, or any other kind of handmade, dimensional art, the very existence of these buildings begs the question: Why? Why were they ever even built?

Not as dollhouses, Burke says. Not one of his buildings is or ever was a dollhouse. Some of them were probably built to accompany a train set; some were Christmas houses. Others were made to document an existing house or building (churches, main streets, the house you grew up in); still others were made for the same reason most art is: pure, unapologetic pleasure.

Still, these buildings are the Easter Island of folk art: they present one mystery after another. We know approximately when they were built: from about 1890 until just after World War II. But for rare exceptions, these buildings were not dated. They also weren’t signed, so we don’t know who made them, or where.

All we know for certain is that if it weren’t for W. Steven Burke, this unique form of American folk art might have never been discovered at all. And like many great discoveries, this one was made by accident. All Burke did was see something he liked, something he liked enough to want two of.

It’s like this: God told Noah to build an ark. Noah did that, and he didn’t sign it or date it either. But after it was finished, he became the first collector there ever was, and he learned, as Burke has learned, that all you need is two of anything: from there, they start to multiply, until after a while, you just stop counting.