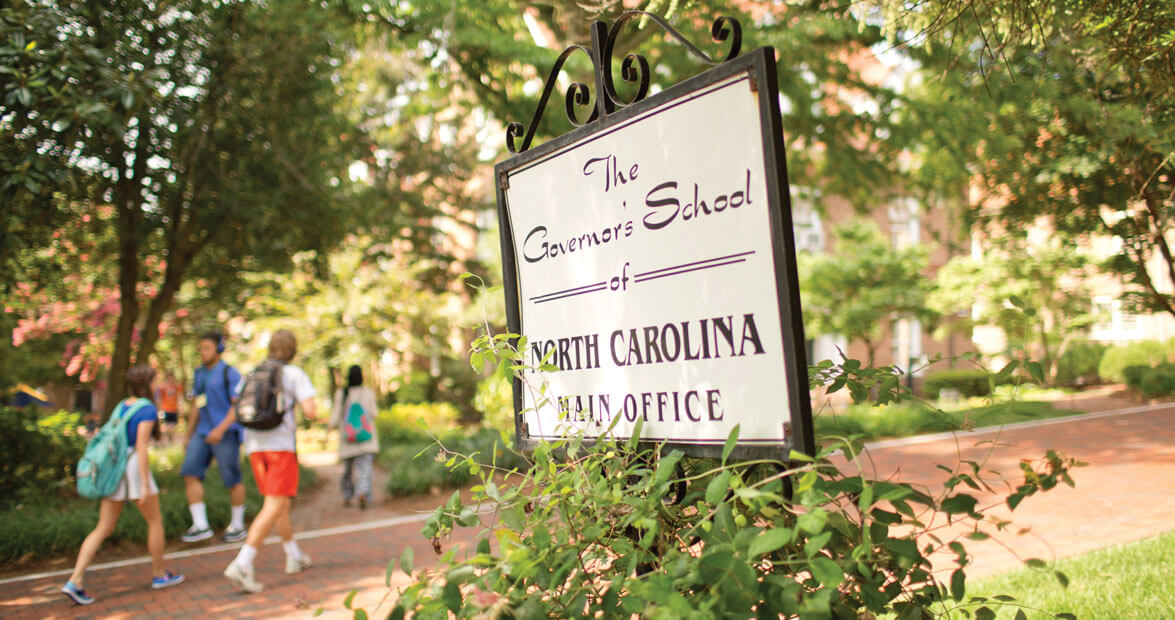 John Coffey was a pretty good painter when he was a student at Raleigh’s Broughton High School.

So good that he won awards for his work. It wasn’t until he attended Governor’s School during the summer of 1971, however, that he realized art wasn’t just a sideline to academics. As the art student sat in front of a canvas every morning, finishing at least 10 paintings that summer, he began to conceive the possibility of pursuing a career in visual art.

“I do think it probably was a turning point of my life because it happens right at one of the most impressionable times, when you’re trying to develop an identity,” says Coffey, the deputy director for art and the curator of American and modern art at the North Carolina Museum of Art in Raleigh. “Just to be able to spend time away from your normal and predictable life and to be put in a group of kids who are as bright if not brighter than you, it was both humbling and exhilarating.”

Founded 46 years ago by Gov. Terry Sanford in an effort to foster the best and brightest high school students across the state, Governor’s School of North Carolina offers a community of learning for six weeks each summer on the campuses of Meredith College (Governor’s School East) in Raleigh and Salem College (Governor’s School West) in Winston-Salem. With 400 students at each location, every school district in the state is represented, infusing the campuses with a variety of backgrounds, experiences, and viewpoints.

Walk around either campus while students are in session, and it soon becomes obvious that Governor’s School is not a traditional high school. Here, math students might study geometry by conducting experiments with bubbles, while theater students write their own scripts. It’s common to find students discussing geopolitical structures of the 21st century rather than watching television. And a good Sunday afternoon might include a drawing marathon capped off with an Alfred Hitchcock film.

Carnegie agreed to fund half of the school ($225,000) for three years. Sanford then asked Henry Ramm, general counsel of R.J. Reynolds Tobacco Company, to help raise the balance. So Ramm held a luncheon with Sanford for Winston-Salem’s business elite and philanthropy officials.

“The governor made his talk … and asked them if they could help support it,” says Ehle, who attended the luncheon with Sanford. “Henry then got up at the end and said, ‘I know the governor wants us to agree to $225,000.’ There was a long pause, and then one of the Reynolds [Charlie Babcock] spoke up, and he said, ‘Henry, let’s just tell the governor he’s got it and after lunch divide it up.’”

During the summer of 1963, 400 rising high school juniors and seniors from North Carolina came to Salem College for the first session of Governor’s School. In 1978, Governor’s School East opened at St. Andrews Presbyterian College in Laurinburg and later moved to Meredith in 2000.

Randolph Foy attended Governor’s School as an orchestra student in 1967 and began teaching there in 1971. “Surprisingly, the program is so similar and has been over the years,” says Foy, who is also associate director of the Department of Music at North Carolina State University and director of the Raleigh Civic Symphony and Chamber Orchestra. “You have to wonder whether [any] differences are simply societal, that the program was different because the world was very different then.”

Nominated by school systems and private schools across the state, students selected for Governor’s School must score in the 92nd percentile or higher on an aptitude test and an achievement test, in addition to having a strong academic record. Students nominated in the arts must also audition.

“Another aspect that really existed from the beginning is the idea that it was supposed to be supplemental, that whatever was offered was supposed to be not what they would normally get in their high school,” explains Foy. “I think it’s remarkable that that curricular format seems to work so well.”

With the majority of the faculty having a master’s degree or higher, the Governor’s School curriculum covers three areas. Area I focuses on the discipline for which the student is nominated, which can be academics or the arts. Area II is philosophically oriented and mixes students of all disciplines together as it focuses on integrative concepts, ideas, and theories related to Area I. Psychologically and sociologically oriented, Area III also mixes students together as it explores how students can take what they learn in Areas I and II and apply that understanding to their social worlds. Although students attend class six days a week, there are no grades or tests.

“We have the privilege of not having to test them, except in the classroom context in asking that their arguments be thoughtful,” explains Lucy Milner, the on-site director at Governor’s School West. “They become more confident of their abilities to ask the right questions, to handle the material on their own. They cease to be passive learners.”

Buddy Spong, former chairman of the school’s board of governors and the chairman for the Governor’s School Foundation, attended in 1968 as a social studies student. “Even 40 years later, I will still tell you it probably was the single thing that changed the way I looked at the world,” he says. “I came from a country background, a home and community that was, frankly, at that point, racist and sexist. It really challenged me to break free of that.”

An important component of the curriculum is the Governor’s School Speakers Series. Past lecturers include historian Tim Tyson, theoretical physicist Neal Weiner, and critical theorist Svi Shapiro. Instead of presenting a canned speech about their careers, speakers challenge students with new perspectives. Last summer, Darryl Hunt, a Winston-Salem man who spent almost 20 years in prison for a crime he didn’t commit, spoke after the students watched The Trials of Darryl Hunt, a critically acclaimed documentary about his experience.

Optional seminars are held in the afternoons and evenings by the faculty, tackling current events, poetry, politics, salsa dancing, and more, while concerts, exhibitions, and performances by students also pepper the schedule.

“What we say to the students is that we don’t really care what you think when you leave here. We care that you think while you’re here,” says Michael McElreath, on-site director for Governor’s School East and assistant professor of history at Meredith College. “We want you engaged and thinking hard and participating in the conversation, and where you wind up in the end is really up to you.”

At the end of the session, students evaluate their experience. While the marks are consistently high, the appreciation for the school runs deeper than an evaluation form can illustrate. For many students, Governor’s School is a place where they can voice opinions freely and simply be themselves for the first time.

“I was the quiet, shy, reserved, no-friends, pencil-neck geek, and in six weeks, I became outgoing,” recalls Jim Hart, who attended Governor’s School West in 1979 for natural science and is now the president of the Governor’s School Alumni Association. “It has really changed me in terms of being able to take charge of the situation, to speak to people, to not be afraid to make my opinion known, to take the lead on a project.”

North Carolina Insurance Commissioner Wayne Goodwin attended Governor’s School West 25 years ago for math and says the program was a factor in his decision to go into public service. “I remember this was the summer of ’84, doing the political polling during the presidential election that year,” recalls Goodwin. “Everybody was talking about their own opinions and ideas and what they were going to do if they were in positions of authority, and really just 10 short years later, I was in the Legislature.”

Then there’s the excitement of living in a college environment before you’re in college. Betsy Hackney, who attended in 1969 for social studies, credits the school for making her more tolerant and open-minded. But one of her most vivid memories is watching the moon landing with fellow students in the basement of her Governor’s School dorm.

“It’s just great when you run into someone and find out they went to Governor’s School,” says Hackney, who works at the Thurston Arthritis Research Center at the University of North Carolina at Chapel Hill and whose husband, Joe Hackney, is speaker of the North Carolina House of Representatives. “It’s sort of like this secret club where you have this instant rapport because I’ve rarely met anyone who didn’t have an eye-opening experience.”