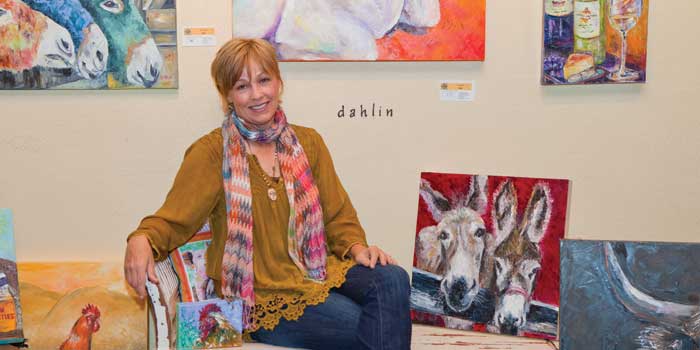 When Susan Dahlin cleaned out her father’s studio a decade ago after he died of lung cancer, she added his palette knives to the items she’d already collected: his easels, brushes, and Grumbacher oils.

From childhood, Dahlin painted alongside her father. Strong-willed, eccentric, an immigrant from Norway, Finn Dahlin nurtured his daughter. Many times, Dahlin saw Finn, knife in hand, scraping away what he didn’t like from a carefully planned composition.

Unlike her father, an engineer with no training as an artist, Dahlin intended to become a painter. But after studying fine arts for two years at Penn State University, she switched to broadcasting. During her 20-year career as a television host and executive producer at WRAL-TV in Raleigh, painting remained an avocation. Today, she spends her days working at Moondog Cottage, a studio she shares with two other female artists.

Nights, though, are for painting.

Alone in her studio, Dahlin slips into the colorful world she likes to paint, full of animals and architecture. Classical music from her father’s 300-album collection surrounds her. Time slows; she relaxes.

Then, she picks up the palette knife. Dahlin dislikes brushes; their constraints prompted her to experiment with her father’s knives. She uses them to apply paint to board or canvas. From the first, she loved the freedom the knives gave her. They let her push paint around, explore, and blend colors applied directly from tubes of the vibrant Charvin oils from Paris.

While she paints, her father is a presence. She hears his counseling voice: That’s a good mistake. Don’t make that a straight line. The hardest thing for any artist, she says, is knowing when to leave a painting. Tweak too long, and it loses its life. It’s finished, her father sometimes tells her. Stop and sign it.

While she heeds those messages, Dahlin stakes out her own territory as a painter. She doesn’t like painting people or long-distance views. Unlike her father, a portraitist, she prefers pets to people. She paints cows; the pale, turquoise Ball Mason jars country women used to store food for winter; the Coke crate in which she stores her tubes of paint. Her aim isn’t realism, but impressions.

After Dahlin and her husband bought a log house high on an Ashe County mountainside a few years ago, she began dividing her time between the cabin and her home in Raleigh. But she spends most nights in the mountains, palette knife in hand, working at one of the easels she retrieved from her father’s studio. The Charvin oils weaned her from his paints, but as each painting nears completion, she pulls out one of his old tubes and applies a little color from it. It’s a way, she says, “to stick a little bit of Dad in every painting.”

Elizabeth Hunter is a freelance writer living in the Bandana community of Mitchell County, and a contributing editor and columnist for Blue Ridge Country magazine.