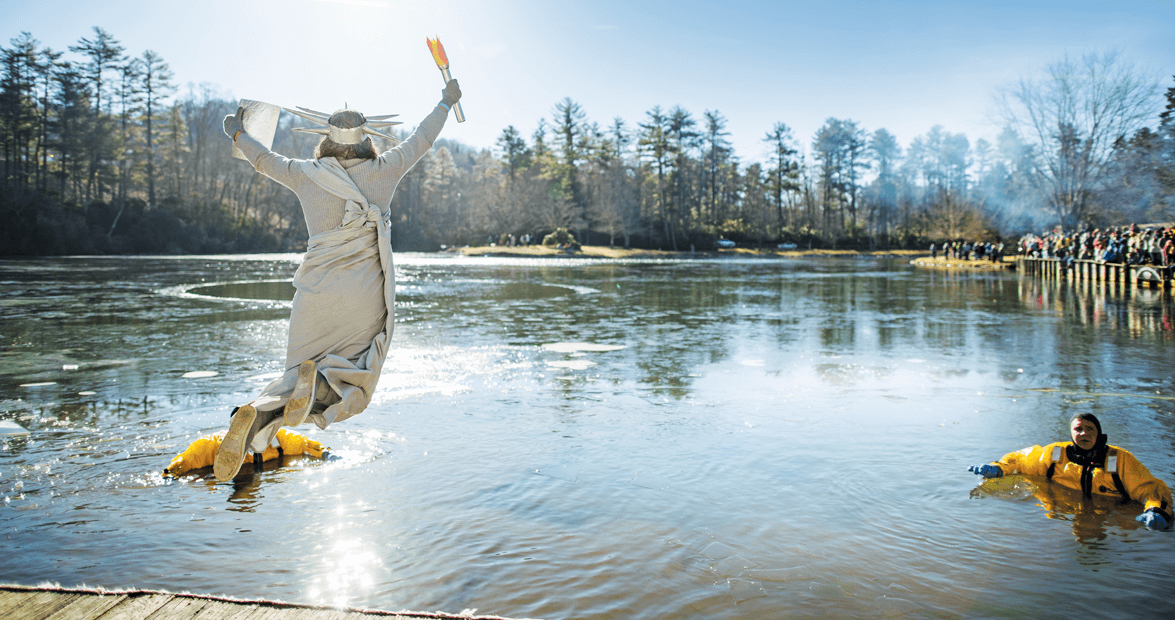 On a bright Saturday morning in January, Tracy Brown stands on the dock at Chetola Lake, wrapped snug in a navy blue jacket, puffy gloves, and a black ski cap covering his bald dome. Toilet plunger in his right hand, he’s cracking jokes with a pair of photographers before the 100 or so participants arrive for Blowing Rock’s annual WinterFest Polar Plunge. The mercury hovers in the high 20s, and the water temperature is just below 30 degrees. A couple of burly men in yellow “dry suits” thrash about on the shoreline, breaking up chunks of ice to make space for the plungers to jump in.

“This isn’t so bad, really,” Brown says. “We’ve had it before where there’s been four to six inches of ice. They had to take a chainsaw and actually stand on the ice to cut it out.” When he laughs, Brown’s raspy cackle skitters across the icy lake. He waves his hand in the direction of the men in dry suits: “They’ll just bust it up a little bit, and then the fire guys’ll come in and sweep it away.”

Brown is the executive director of the Tourism Development Authority for a town in which tourism is everything. Each January, WinterFest draws some 3,000 people to Blowing Rock. The village of about 1,300 also hosts a food and wine festival in the spring, a symphony performance in July, and six monthly Art in the Park events. At its heart, Blowing Rock is a town of service-industry workers whose collective job is to ensure that visitors have good food in their bellies and plush pillows to rest their heads after exploring the natural wonders in this neck of the woods: Grandfather Mountain is 11 miles to the southwest; Appalachian Ski Mountain is three miles to the north; and Blowing Rock’s namesake, a huge metamorphic rock, overlooks Johns River Gorge two miles south of town.

The rock got its name from the legend of a lovestruck Cherokee brave who leapt from the cliff to his death, only to be revived by the Great Spirit, who blew him back up to safety. A dramatic tale, for sure, but one that’s somewhat based in science: The powerful winds that blow through the 3,000-foot-deep gorge create an unusual updraft that can make snow appear to fall upward.

“We’ve had it before where there’s been four to six inches of ice.”

In the late 1800s, travelers arrived to glimpse the mysterious overhang, and the adjacent village became an oasis for the wealthy and a refuge for weary Civil War soldiers. The first white settlers in the area, the Greene family, lived on a tract of land that became the site of the grand Queen Anne-style Green Park Hotel in 1891, two years after the incorporation of the town of Blowing Rock, population 300. By 1933, the Blowing Rock formation was a major tourist attraction, one of the state’s first. The Green Park alone lured powerful visitors over the years, including John D. Rockefeller, Calvin Coolidge, Herbert Hoover, and Eleanor Roosevelt.

Not likely that any of those notables would have participated in The Plunge. 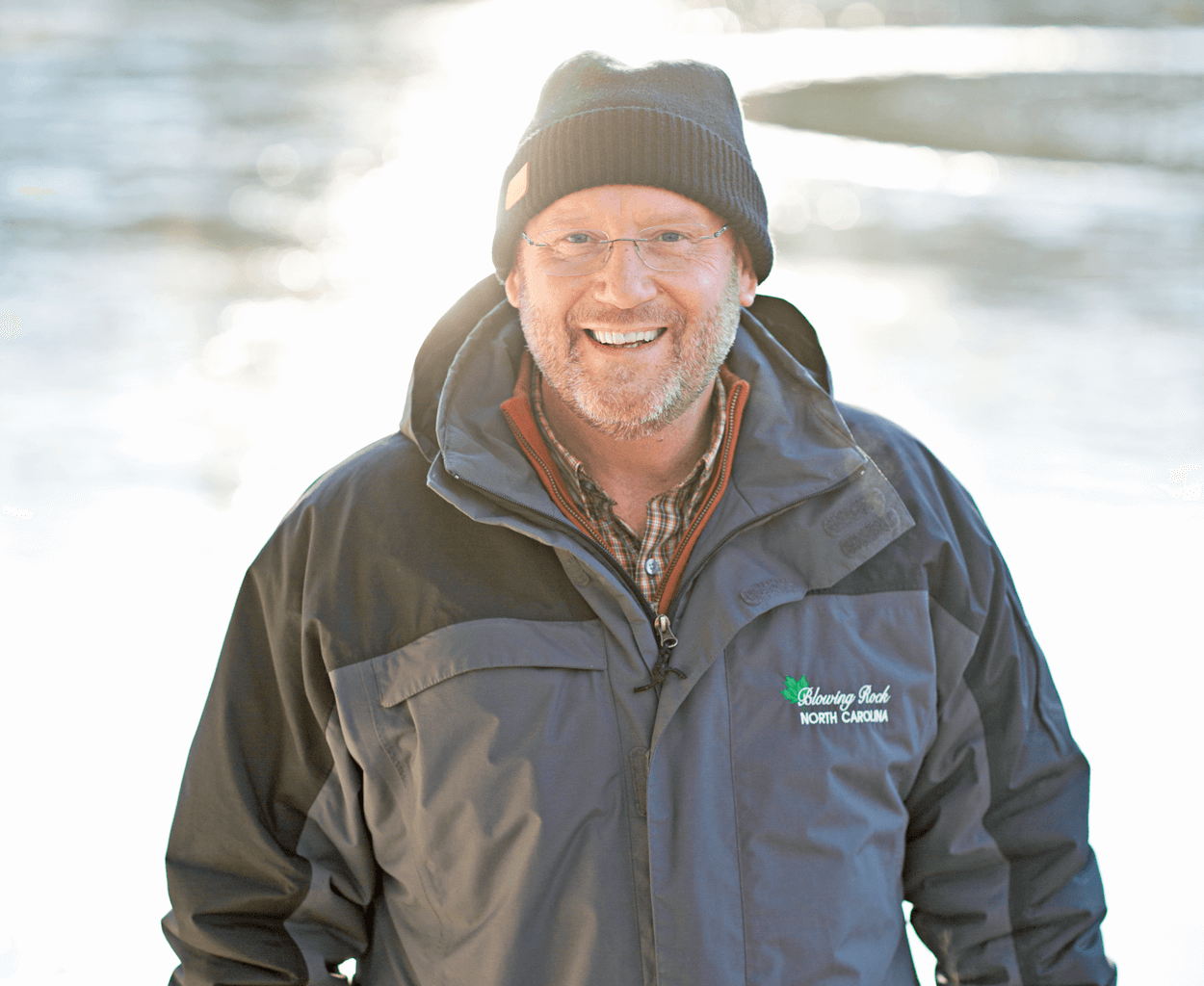 Blowing Rock’s executive director of tourism, Tracy Brown, no longer takes The Plunge himself. But he still cheers on the brave costumed characters who take a dip in Chetola Lake every January. photograph by Revival Creatives

On the dock at Chetola Lake, Brown is regaling folks with stories of the 15 times he’s personally taken The Plunge, including the inaugural one back in 1998. That year, he jumped alongside the town’s mayor, fire chief, and chamber director; a couple of local radio hosts and a math professor from Appalachian State University; and Brown’s physician, Dr. Charles “Bunky” Davant.

Now, at 53, Brown has put his polar-plunging days behind him. “I was getting my physical a few years ago, and Bunky, he says to me, ‘Brother Brown, it’s probably time you give up this jumping-in-the-lake business.’

“He says, ‘Son, after I did it the last time, I couldn’t talk for two weeks.’” Brown lets out another raspy cackle, and then he becomes uncharacteristically quiet.

Not every WinterFest event is so brutal. Later in the day, hundreds descend on Blowing Rock’s downtown shopping area, which stretches from the Art & History Museum on Main Street north to the wooden gazebo in Memorial Park. There, sculptors from Charlotte transform glistening blocks of ice into birds and bears and other Blue Ridge critters. A miniature John Deere tractor carts wagons full of bundled-up hayriders past the Chamber of Commerce, where the festival’s mascots, a snowman named Chilly and his wife, Crystal, pose for selfies with toddlers and their parents.

The experience is a total shock to the system. “Your brain just goes womp womp womp.”

At the end of the street, a K-9 Keg Pull showcases Chihuahuas dragging soda cans, a retriever lugging an actual beer keg, and a collie in reindeer antlers. Mayra Ward’s husband, Ricky, and their 2-year-old daughter, Olivia, have flipped the script: Ricky dons a baggy gray costume with floppy ears that makes him look like a disheveled Weimaraner in a community theater production; Olivia is dressed as a sad-eyed basset hound. The Wards arrived in Blowing Rock 11 years ago from Greensboro to visit Kilwins, a chocolate and ice cream shop on Main Street. They never left. 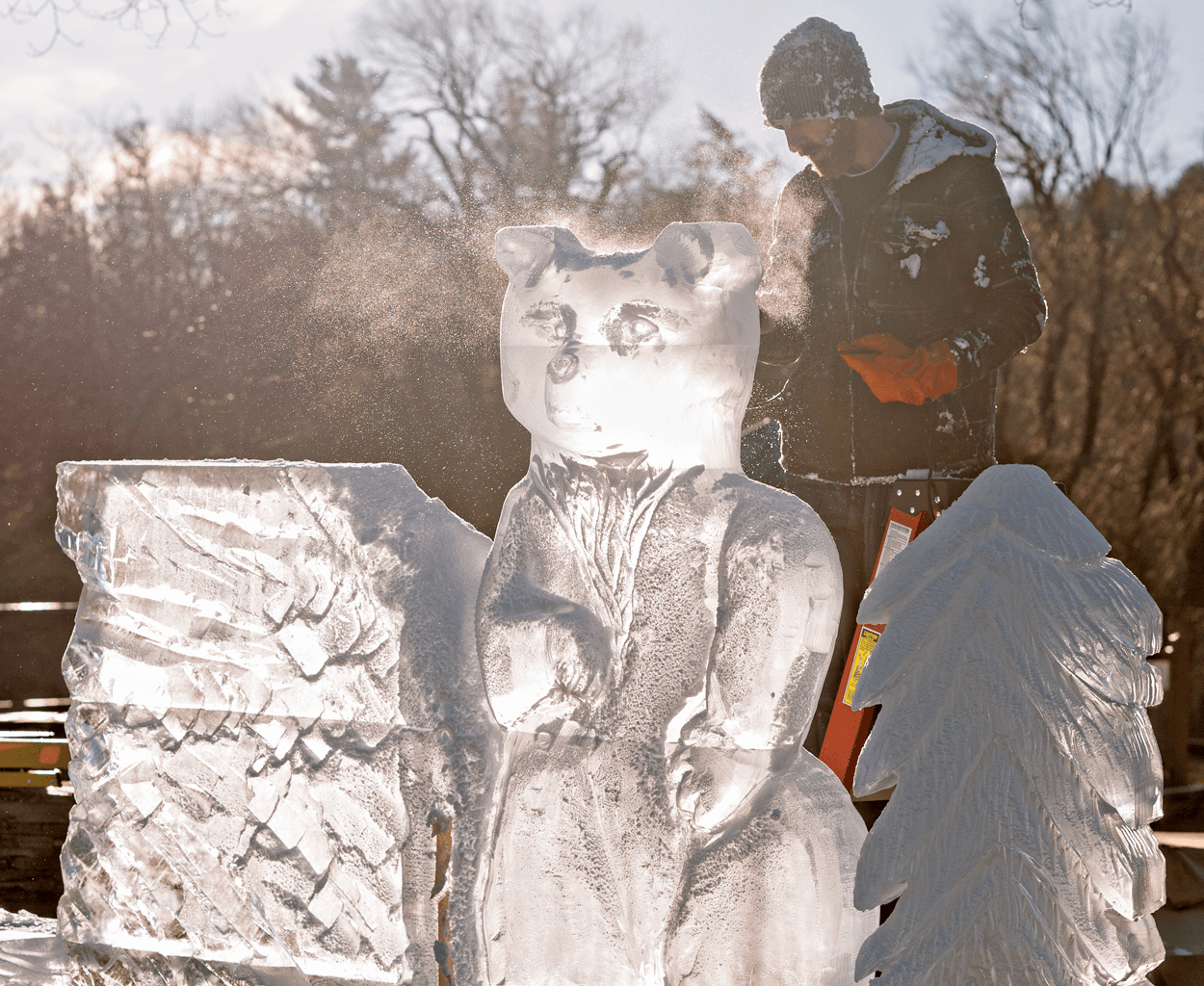 “A lot of people save their vacation days specifically for WinterFest weekend,” Mayra says. There’s plenty to do: The four-day festival includes wine tastings, a beer garden, arts events at the museum, a chili cook-off, and s’mores at Chetola Resort. But the centerpiece of WinterFest is The Plunge.

Back at Chetola, the contestants, all costumed and carrying toilet plungers, gather around for a rundown of the rules. The folks dressed as food — including a banana, a watermelon slice, peas, eggs, and bacon — are advocates for housing and hunger relief from Hospitality House of Northwest North Carolina, whose community kitchen serves 12,500 meals a month. For five years, The Plunge has been a fund-raiser for the food pantry and shelter. 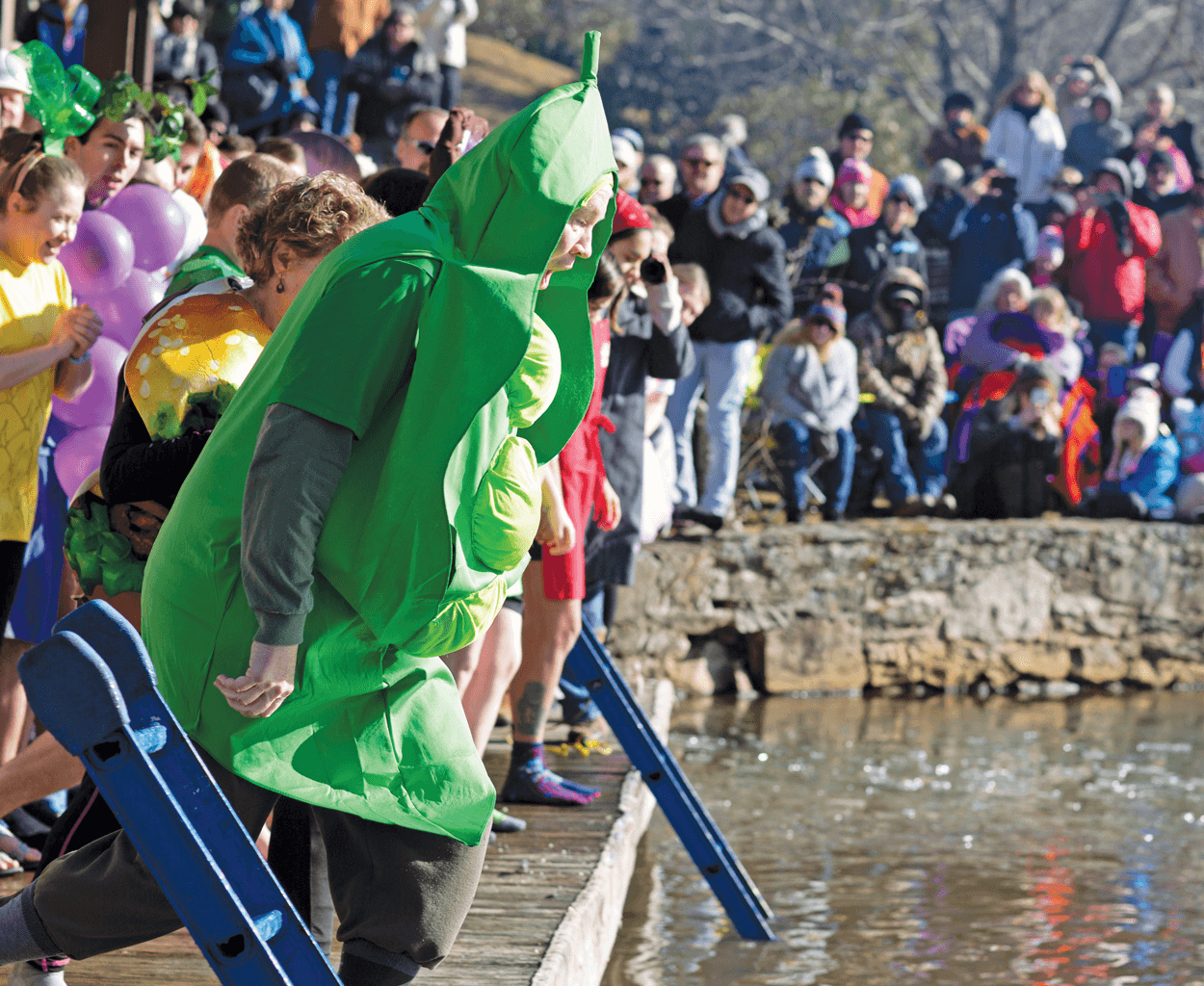 For five years, Hospitality House of Northwest North Carolina has made The Plunge part of their fund-raising. Last year, Todd Carter, director of development, and his team dressed as fruits and veggies and raised money to expand their food pantry. photograph by Revival Creatives

“We theme our costumes each year, and this time the money is benefiting the food pantry expansion. It only seems right that we would make a big spectacle of it,” says the organization’s director of development, Todd Carter, his face and body wrapped in a pea pod. He waves a hand in the direction of his 18 colleagues. “Our staff therapist” — he reaches for the arm of Jenna Crawley, dressed as a watermelon wedge — “tells us every year that making The Plunge is really good for team building and our mental health.” Crawley nods knowingly, and Carter grins. “We choose to believe her,” he says.

Just before 10 a.m., the plungers begin their march to the lake as the music of Arnaud’s “Bugler’s Dream” — the familiar Olympic Games theme — blares from the PA system. One after the other, they leap into the lake and scramble out, running like mad back to the warmth of the resort. As Brown puts it, the experience is a total shock to the system. “I’m telling you, man, your brain just goes, womp womp womp womp, and then your body immediately says to you, ‘Get out! Get out now!’”

But next year, you just know they’ll all be back for more.