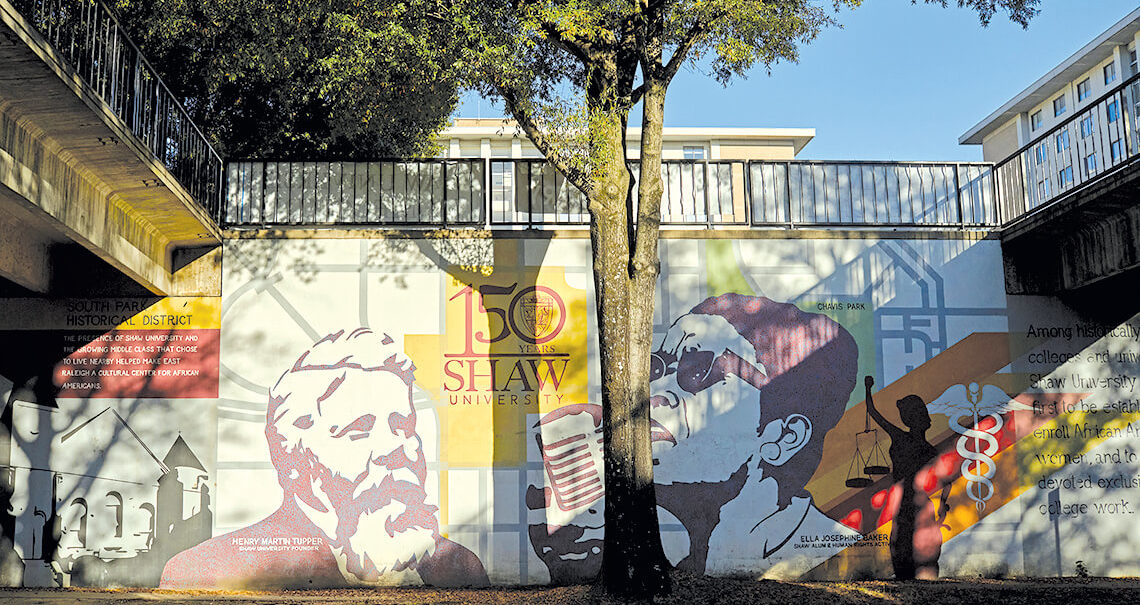 It’s an unusual sight for an early afternoon on the streets of Raleigh: A young woman in a mustard-colored dress walks the perimeter of the Shaw University campus, a tall crown atop her head and a garnet-and-white sash across her chest. The stones in her headwear grab and scatter the light, catching the attention of passersby who pull out their cell phones to snap a quick picture. Drivers along East South Street idle for a moment to take in this brief scene of pageantry before continuing toward the intersection.

Biancé Wilburn is Miss Shaw, the campus queen. Her role for the academic year is to contribute to several philanthropic and educational endeavors meant to carry forward the university’s long-standing tradition of serving the community — on campus as well as in Raleigh at large. It’s a challenge to fulfill her duties during an unusual year, when students can’t gather in large numbers, but she is bolstered by her love of her school. 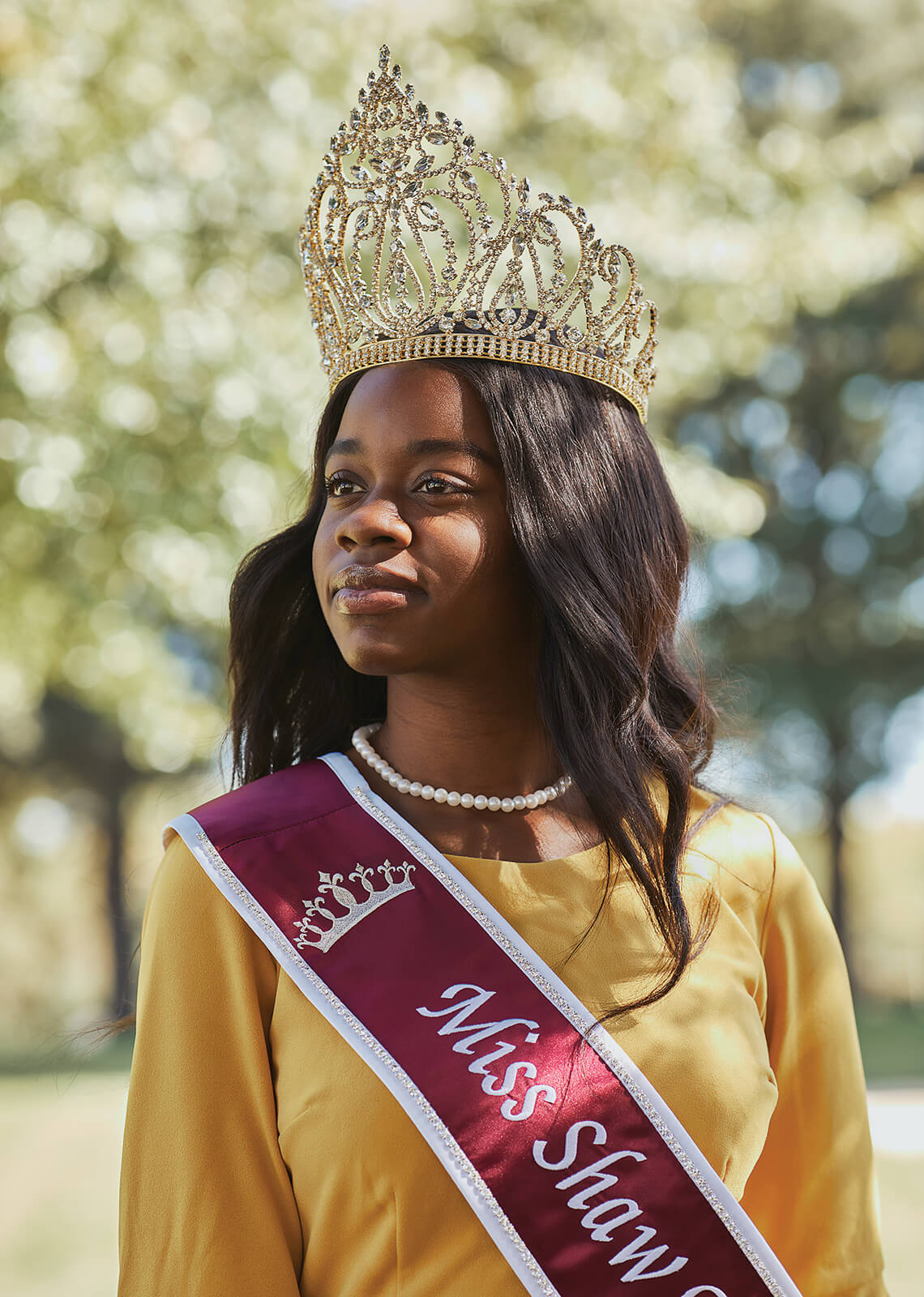 Wilburn hails from Los Angeles, and she came to North Carolina specifically to attend Shaw University. “Shaw took a chance on me, so I took a chance on Shaw,” she says. In high school, Wilburn didn’t believe she would attend a four-year university. And then she heard from Shaw. “I didn’t have enough courage in myself,” she says. “If they hadn’t invested in me, I wouldn’t have made it this far.” Now that she’s a senior and has spent almost four years here, she’s fallen in love with the region. “The fact that you can get up and say good morning to people and they genuinely say it back is like” — she pauses, then continues enthusiastically — “wow, I’ve only seen that on TV.” She laughs, adding, “And the air is fresh. I come from so much smog.”

Her story is not unusual. Many in Wilburn’s court today came to this famed institution — known as an HBCU, for historically Black colleges and universities — because it represents excellence and opportunity. Others came for Shaw’s history. “When I was looking at my options,” says Student Body President Ian Finley, “I liked the diverse background of Shaw and the role it played in history in helping Black folks get an education back in the days of slavery. Shaw is the oldest HBCU in the South — we opened in 1865. All the people who founded this place and why they did it, it connected with me.”

The campus bell chimes, signaling the end of their celebration of school pride. And with that, Miss Shaw and her court make their way back to the dormitories to take off their regalia and transform back into students — just in time for class.

Across the bridge spanning South Blount Street, away from the main residence halls where the students now stay, sits the James E. Cheek Learning Resource Center. The building is named for the 1955 Shaw graduate who became the 13th president of Howard University in Washington, D.C. Inside this library’s illustrious walls, archivists from the university and community work to catalog all that has been collected during the institution’s existence. 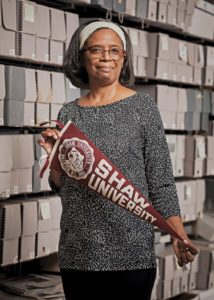 Originally called the Raleigh Institute, Shaw was founded by Henry Martin Tupper. Not much is known about him, but historians do know that Tupper served as a Union Army soldier during the Civil War. A minister, he was injured in the Battle of Jackson, Mississippi. He promised God that if he survived, he would spend his life educating freedmen. After the war, Tupper made his way to Raleigh with his wife, Sarah Baker Leonard, and began teaching literacy and Bible study classes to Black men in December 1865. The institution he started was the first Black college in the region. It would later become the first college of any kind in the nation to offer a four-year medical program, and the first HBCU to admit women into degree-granting programs.

In the beginning, classes were held in sharecroppers’ cabins. Students contributed to the school’s construction by crafting the bricks that would be used to build new classrooms. Several bricks from one of the oldest buildings, Shaw Hall, sit in a slate-gray box in the archives, wrapped in muslin, a testament to what those seeking knowledge were willing to do to craft better futures for themselves. 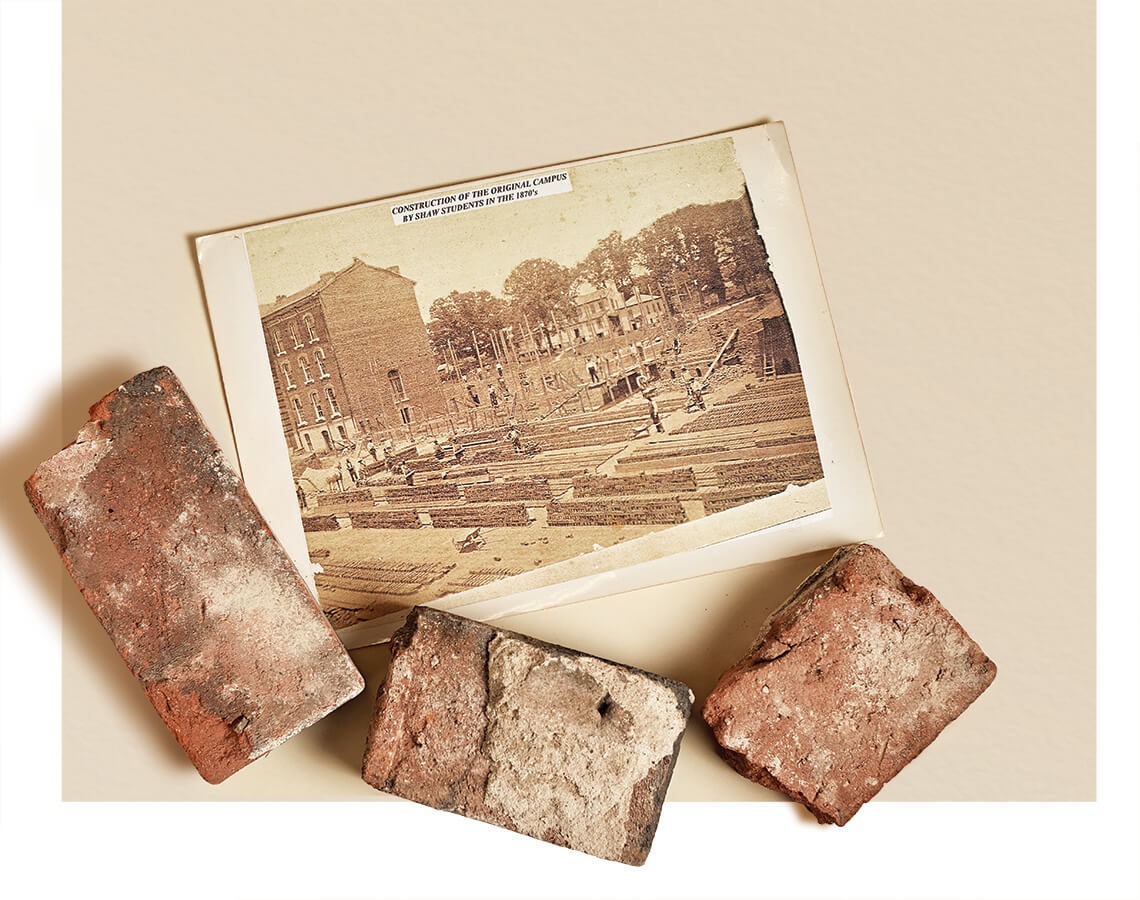 Among the Shaw University archives are bricks used to construct early buildings like Shaw Hall. The bricks were made by original students whose classes were held in old sharecroppers’ cabins. photograph by Alex Boerner

Preserving Shaw’s history is only one part of the archivists’ mission. Another is to transmit what they know to students to help them shape their educational inquiries, and to inspire them as they forge their own paths. One path that many Shaw alumni have chosen over the school’s more than 150 years is the pursuit of civil rights. “They have had a history of social activism on campus. That is one of Shaw’s legacies,” Treadwell says. From its earliest years, the campus has been at the center of political mobilization and civic activism in the region.

Among Shaw’s best-known alumni is the late activist Ella Baker, who graduated as class valedictorian in 1927 . After leaving Raleigh, Baker worked as a field secretary and later a branch director for the National Association for the Advancement of Colored People (NAACP). In 1957, she served as associate director for the Southern Christian Leadership Conference. Baker returned to Shaw in 1960 to found one of the era’s major civil rights organizations, The Student Nonviolent Coordinating Committee, later known as SNCC. She was pivotal in creating grassroots campaigns throughout the South, teaching citizens how to advocate for themselves to achieve change rather than depending on just one powerful figurehead. “We like to say that Ella had her protesting chops sharpened here at Shaw,” Williams says. “Her first protest was that she didn’t want all women to have to wear cotton stockings, and she led a protest. The president actually kicked her out of school, but the dean of women stepped in, and she was allowed to graduate.” 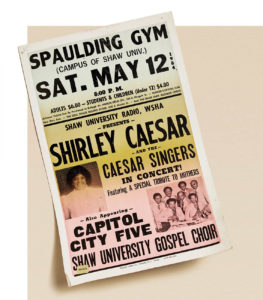 Over the years, Shaw’s archives have served other students who would become leaders. Gospel legend Shirley Caesar attended Shaw, as did Congressman Adam Clayton Powell Jr. Many alumni went on to establish or preside over other HBCUs. The founder of North Carolina Central University and the first presidents of Elizabeth City State and A&T universities all were Shaw graduates.

North Carolina A&T State University began on Shaw’s campus in 1891 as the Agricultural and Mechanical College, but the school grew and eventually moved west, to Greensboro, where it is now the nation’s largest HBCU. There, on the tree-lined streets of campus today, school is in session. In between classes, the swoosh of the swinging glass doors of the Dudley Building indicates that another curious student has arrived to take in a bit of its gallery’s curated art and history.

Today’s exhibit is Jeanne Moutoussamy-Ashe’s “Daufuskie Island: A Photographic Essay.” Moutoussamy-Ashe spent time on the South Carolina island to capture the folkways of the Gullah Geechee, descendants of enslaved people from Africa. When she saw that their culture was changing due to technology and interactions with the outside world, she decided to preserve what she could before the old ways vanished. Her exhibit shows that historians and artists share a common enemy: time. The libraries and galleries at North Carolina’s HBCUs show students that their racial legacies stretch far beyond our state lines.

“Black art and culture matter,” says Dr. Baker, director of A&T’s galleries and professor of history. “Just by experiencing all that these places have to offer, you can see the talent that grows out of these communities, particularly ones that have gone through so much, like the African diaspora has, and you can appreciate that expression. It humanizes a population.”

Back at Shaw, Alexi Sprague heads down the hall to the library’s archival back room. The air is thick with the heady scent of old paper and ink. When she opens Shaw’s yearbooks, they smell almost almond-like. Sprague says that she often picks up an archival box and thinks, What’s in this one? How can we tell students the story of what’s in here? Some of the things she’s pored over this year include scrapbooks from alumni documenting their time at the college, and Christmas cards that students long ago sent to one another — snapshots of collegiate life that are rarely documented, let alone seen by the public.

The stories in the archives and galleries at both Shaw and A&T — two HBCUs that grew together — are tales of struggle and triumph, of opportunity and a dedication to equal rights for all citizens. They’re reminders of the major roles that these institutions have played in the development and direction not only of North Carolina, but also of our country. And it all started in little sharecroppers’ cabins in downtown Raleigh. 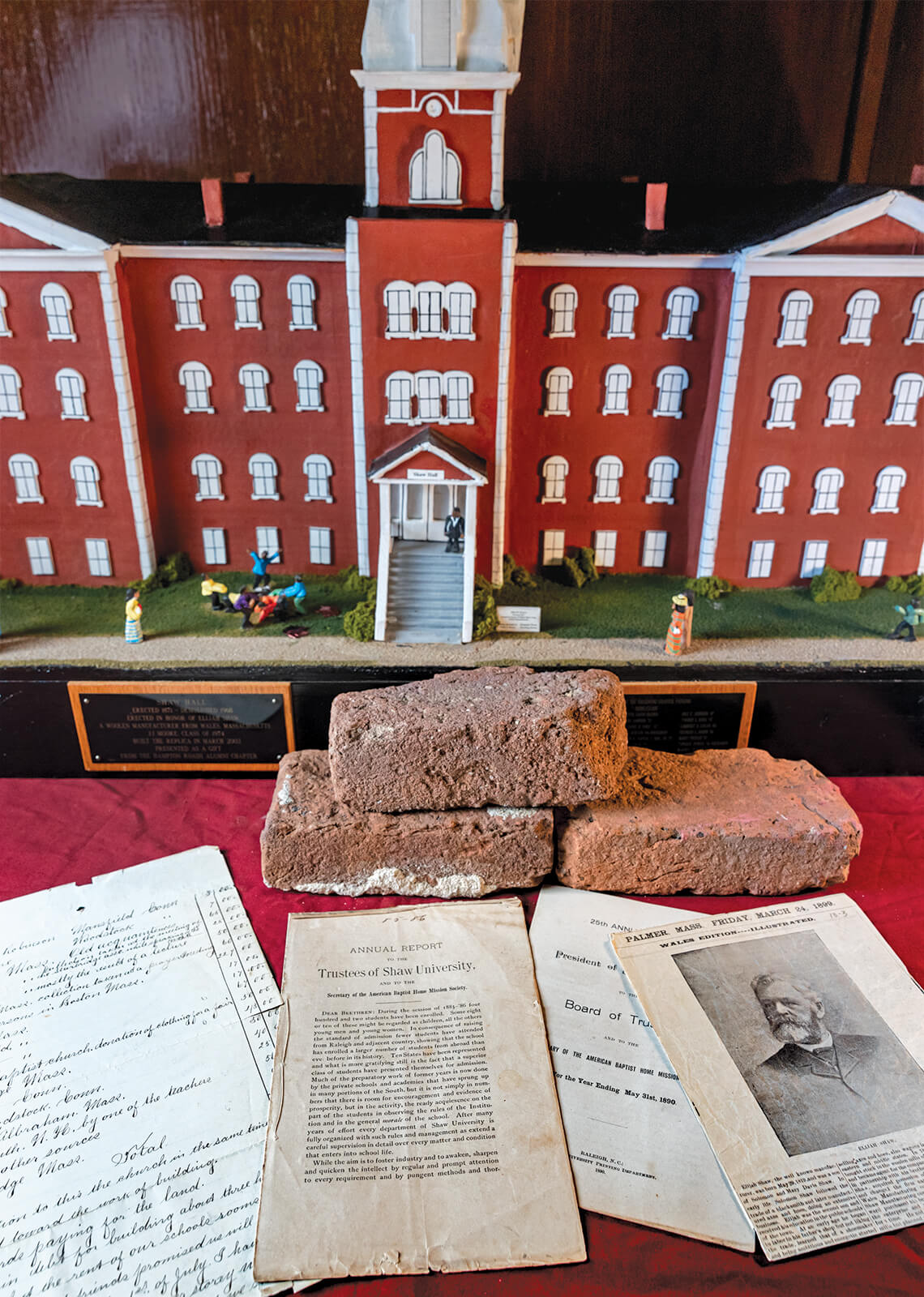 A model of the original campus, surrounded by items from the archives. photograph by Alex Boerner