Sometimes, in the middle of the night, Crystal Lloyd will get called out to a campsite because of a very particular noise. “Someone thinks there’s an assault or something occurring,” she says. Quickly, though, she realizes that the noise that’s alarmed the campers is not what it seems to be. “If you’ve never heard a fox at night, it is terrifying. It definitely sounds like a small child or a young woman is screaming.” 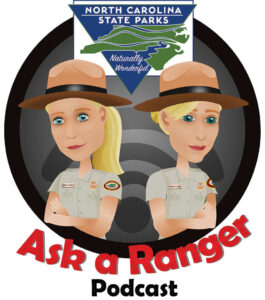 Her explanation calms nerves, but screaming foxes still freak people out. Luckily, Lloyd has a solution: Listen to an episode of her podcast, in which she demystifies sounds of the night and other topics related to being out in the woods. “I can play [a recording] for folks and be like, ‘Hey, did it sound like this?’ And they’re like, ‘Yeah, that’s exactly what it sounded like,’” she says. Listening means there’s one less bump in the night to worry about. “It’s not scary out here,” she tells her listeners. “It’s OK. They’re not going to bother you.”

Lloyd is a superintendent at Falls Lake State Recreation Area near Wake Forest. She’s also one half of the Ask a Ranger podcast. She and Jessica Phillips, the superintendent at Mayo River State Park in Rockingham County, talk about, well, what it’s like being a ranger. The parks. The wildlife. And, yes, screaming foxes. The show started in 2017, and they’ve been releasing an episode or two a month since then — more than 70 in all. The feedback has been positive. Mostly. “We’ve only had one one-star review,” Phillips says, chuckling. “It was from this young man whose parents made him listen.”

Ranger Jess and Ranger Crystal, as they call themselves on the podcast, met in a very ranger-like way: at a wildfire. In 2016, the Party Rock Fire was burning near Lake Lure, and rangers from across the state were called in to help. Lloyd and Phillips were roommates for a week as they cut fire lines and hacked at rhododendrons. At the time, Phillips was working at William B. Umstead State Park near Raleigh, and Lloyd was a few miles down the road.

A short time later, Phillips was kicking around the idea for a podcast. Part of being a ranger involves being an informal educator. After all, people are always asking about the trees, the plants, the animals, and the history of whatever park they’re in. Plus, there are a lot of folks out there who’ve simply never checked out a state park. “If you don’t like the outdoors, or you’re afraid of something,” Phillips says, “we could bridge that gap and give you your first ‘outdoor experience.’” 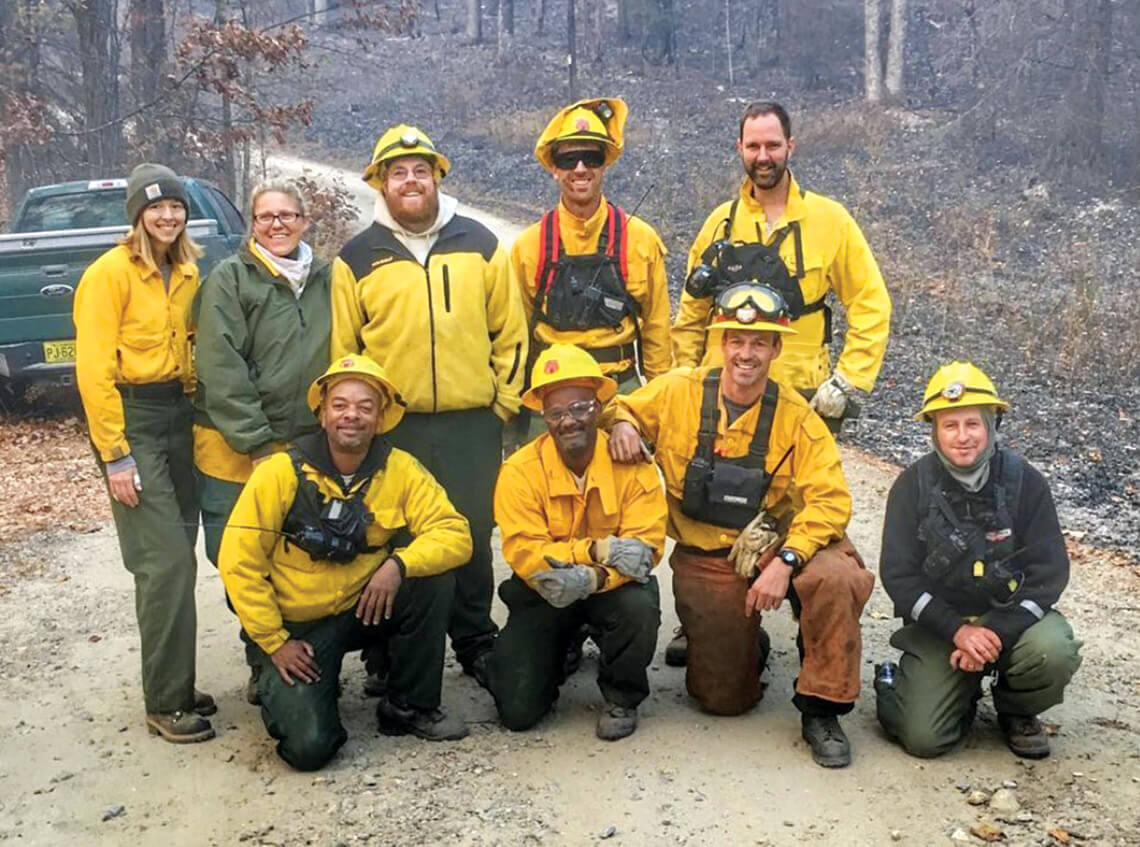 Lloyd and Phillips first met six years ago while helping to fight a wildfire at Lake Lure (Lloyd at far left and Phillips right by her new friend’s side). Photography courtesy of CRYSTAL LLOYD

Podcasts and nature go together surprisingly well. They help hikers pass time during long, tedious portions of trail. They’re also perfect for a jog or a walk. You are literally inviting someone’s voice into your head through your earbuds.

Phillips and Lloyd’s first show was called, simply, “What Does a Park Ranger Do?” They’ve since traveled to the North Carolina Zoo. They’ve done how-to pieces on hiking and camping. They’ve talked about animals like eels, coyotes, and snakes. They’ve told ghost stories. They interviewed Dwayne Patterson, director of North Carolina State Parks. They talked to a ranger in Japan to see how parks work there. They’ve also gotten into history, devoting one episode to a man who grew up in a segregated park, Reedy Creek, that was eventually integrated and absorbed into Umstead.

The Ask a Ranger podcast isn’t always polished, but that’s part of its charm. An episode on beetles featured a lot of What’s that? and Why is that? “Probably selfishly, Jess and I lean toward topics that we want to know more about,” Lloyd says. “We don’t necessarily come in with a set of questions.”

At first, the two considered riding around state parks in a van, but the pandemic has made in-person interviewing less viable. So they do more talking via Zoom, which has helped them expand their reach. “We were able to talk with a ranger in Scotland,” Lloyd says. “That was not going to be a trip that State Parks was going to send us on for a 20-minute interview.” Zoom has also helped the two stay connected, since Phillips’s job at Mayo River is more than 100 miles from Lloyd’s at Falls Lake. 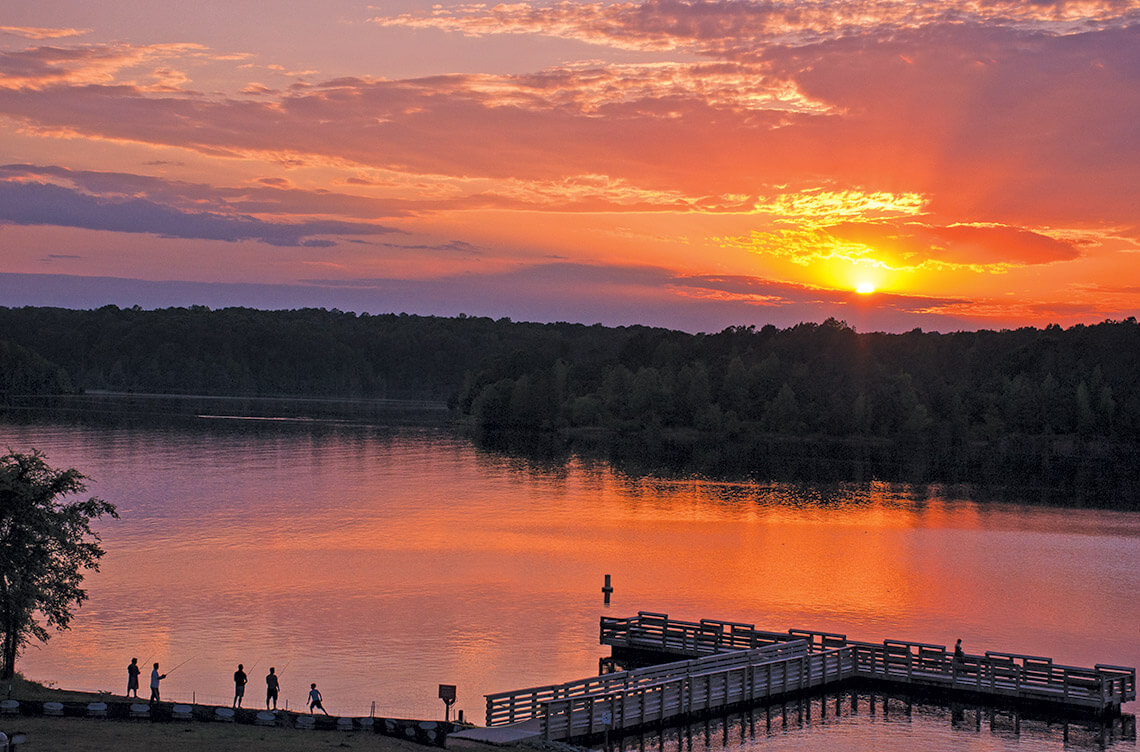 Falls Lake is a sprawling 12,000- acre reservoir just north of Raleigh and east of Durham, where the sunsets are dramatic and time moves just a little more slowly. photograph by Ginny Williams

Last year, Lloyd and Phillips were both promoted to superintendent, which means more responsibility, more time in the office, more planning and managing, and so on. It’s not always exciting to be a ranger, but making Ask a Ranger keeps reminding the two why they chose this kind of work. “I’ve had several of those days when I’m like, ‘Why am I doing this? It’s like 90 degrees out. I have to clean this bathroom. Like, why?’” Lloyd says. “And then you’ll have a moment: Being at the lake, it’s normally the sunsets that catch me and bring me back. I forget that the lake is beautiful.”

Who wouldn’t want to talk about that?

Listen Up: You can find rangers Jess and Crystal at ncparks.gov/ask-ranger, and in our monthly “Outdoors” newsletter, where they share state park secrets. Sign up at ourstate.com/newsletters.