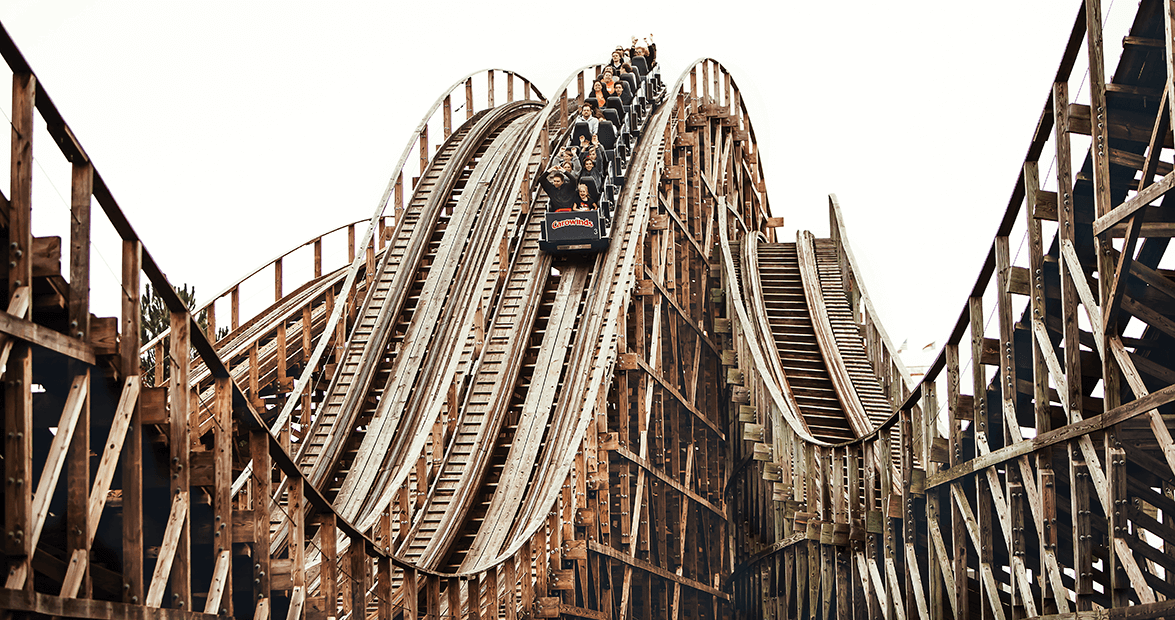 1. Wooden roller coasters should give you a headache. Thunder Road will jostle you around. The cars run over a rough track meant to simulate a ride in the bed of a rusty old pickup on a pockmarked country road. Hold on, son. Gonna hit some potholes. Ain’t no reason to slow down. People have complained that Thunder Road is too old and too rough and not tall enough, but come on. Just look at it. This is no smooth-tracked Afterburn or gimmicky stand-up Vortex. This thing is going to mess you up in the most gentle possible way.

2. The best seat isn’t in the front; it’s in the back. That’s where the whip cracks. At some amusement parks, the back seat on wooden coasters is so popular, the railing that corrals the line has some extra switchbacks in it, just like it does for the front seat. A lot of kids will wait just a little bit longer to get their brains scrambled.

3. The whole point of a roller coaster is to make you feel unsafe. The Intimidator at Carowinds is basically a bunch of rolling seats bolted to a track. They barely even strap you in. There’s only a little restraint that folds over into your lap. That’s it. After that, it’s implied, you’re on your own. There’s no real need for a warning to keep your arms and legs inside the car at all times because there’s no car surrounding you. You’re going to be fine, and Logical You knows this. Then you drop 232 feet from the top of the first hill and start to climb the next one, and realize you’re going to break free and keep rising up on a perfect trajectory that will allow you to soar over the parking lot before crashing to earth on top of a tour bus. That never happens, but you leave each ride knowing you just barely won a battle with inertia.

4. Thunder Road was gimmicky. One of the less effective selling points was the location. The track ran back and forth across the North and South Carolina state lines without having the courtesy of letting you stop to buy fireworks or cheap gas. Another gimmick: The cars on one track of Thunder Road used to face backwards. That was fantastic. It only added to the headache factor because you had absolutely no idea when you were going to snap into a turn. After 2008, Carowinds turned the cars back to forward, which really made you feel like you could race the people on the other track. It was close enough to reach out and hold the hand of someone across from you. You couldn’t, thanks to a wooden guardrail. But still, it would have been sweet, unless you would’ve reached out to the wrong person, who’d refuse to let go, and you’d head into the corner and bam, your arm’s gone.

5. I saw a complaint online that said it was time for Thunder Road to go because the only good thing about it was the lack of a line. Now, wait. The whole idea of having a new roller coaster is that it, thankfully, makes the line shorter at other roller coasters. If you insisted on riding just the best coaster at Carowinds and nothing else, you would get two rides in and then the park would close. You need the short line. When everybody’s waiting in the summer heat for three hours for one ride on Fury 325, you can walk off another roller coaster and get right back on. I’ve been on some roller coasters that were so forlorn that they didn’t even make me get out of the car before sending me on a repeat trip up the hill. Those little rides are important. They’re the snacks between the meals. So you can walk right on Thunder Road? Treasure it. 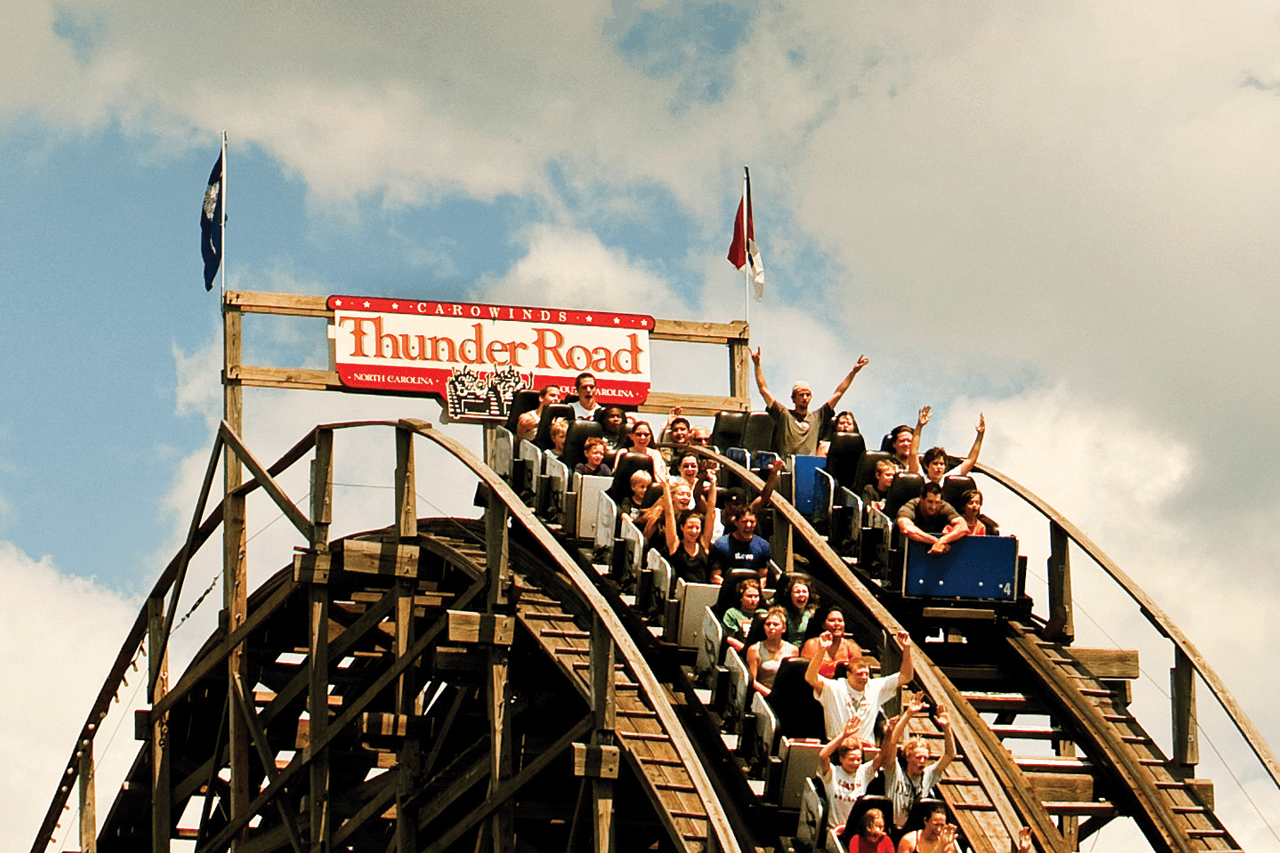 6. Repeat ridings are essential if you want to have a strong roller coaster photo game. Amusement parks were way ahead of the selfie craze. They put up a camera and a flash along the track. Somewhere past the halfway point, they’d shoot pictures, and then try to sell them to you at the end. You’re supposed to look excited, scared, or stupid. It’s a good system, but you can hack it by figuring out exactly where the camera is, and then practicing until you are able to create the perfect image. Hence, I once gave serious consideration to bringing a book to an amusement park as a kid — a thick hardcover one that I would’ve had to carry around all day — just to try to get a picture of me serenely reading Where The Sidewalk Ends on a roller coaster while everyone around me was freaking out. Instead, I convincingly fake-punched my best friend, Todd. Afterward, people pointed at our picture up on the screen above the photo booth cashier. We had earned some sort of respect. We still didn’t buy the picture.

7. Every time I go to Carowinds, I map out a strategy for moving through the park, one that will lead to the most rides. I’ve used roughly the same system since I was a kid growing up in Ohio. Cedar Point became my test lab. Todd and I would maximize its potential. What coasters do people hit first? When are they busiest? When do the most people eat lunch? At what point should we wait the longest? How long is too long a line? How many times should we walk off and walk back on The Magnum? We had a very good system. We’d walk to the furthest point in the park in the morning, avoiding the less savvy people who just got in line for the coaster near the front gate. Then, those people would inevitably get hungry and go to lunch at, say, 11:30. That’s when we’d get in line for the tallest coaster in the park. The lunchtime crowd wouldn’t want to ride a big coaster on a full belly, so they’d hit some of the more tame coasters while we jumped on the other big ones we missed. It went on like this. But I swear we got more rides in than anyone else.

8. The company that owns Cedar Point also owns Carowinds, which is the best possible outcome for roller coaster lovers. Cedar Point is an amusement park that sits on what amounts to a pinhead of land that sticks out from Sandusky, Ohio, into Lake Erie. The amount of land is finite. And yet somehow Cedar Point is crammed to the gills with more roller coasters than amusement parks twice its size. When those folks say that they’re taking out Thunder Road to make room for future expansion, I’m okay with that. I’m on to their game. They’re not going to let me down.

9. My buddy Todd used to have a recurring dream where he’d won some sort of contest, and the prize was the final ride on a wooden roller coaster. And during that ride, someone would light the coaster on fire, and he’d just be riding around, dodging flames and smoke and having the time of his life. I thought he was insane. But then I started having the same dream.

10. Thunder Road closes July 26. We featured it on the cover of Our State magazine last year, which is not quite like the Sports Illustrated cover jinx, but still. We’re sorry. I genuinely hate to see any roller coasters go. Thunder Road was always a good way to check back in to see what used to excite a previous generation. For anyone who’s ever rolled their eyes at their elders (Only three TV channels! Square dances!), Thunder Road was a genuine way to actually experience something exactly the way they did. It was also a good way to ease a four-foot tall child into roller coasters. It was the learners’ permit of rides. It was your mom and dad’s roller coaster. It was where everyone formed their love for thrill seeking before moving on to bigger and better things. You might not miss it now. But you’ll talk about it when it’s gone.