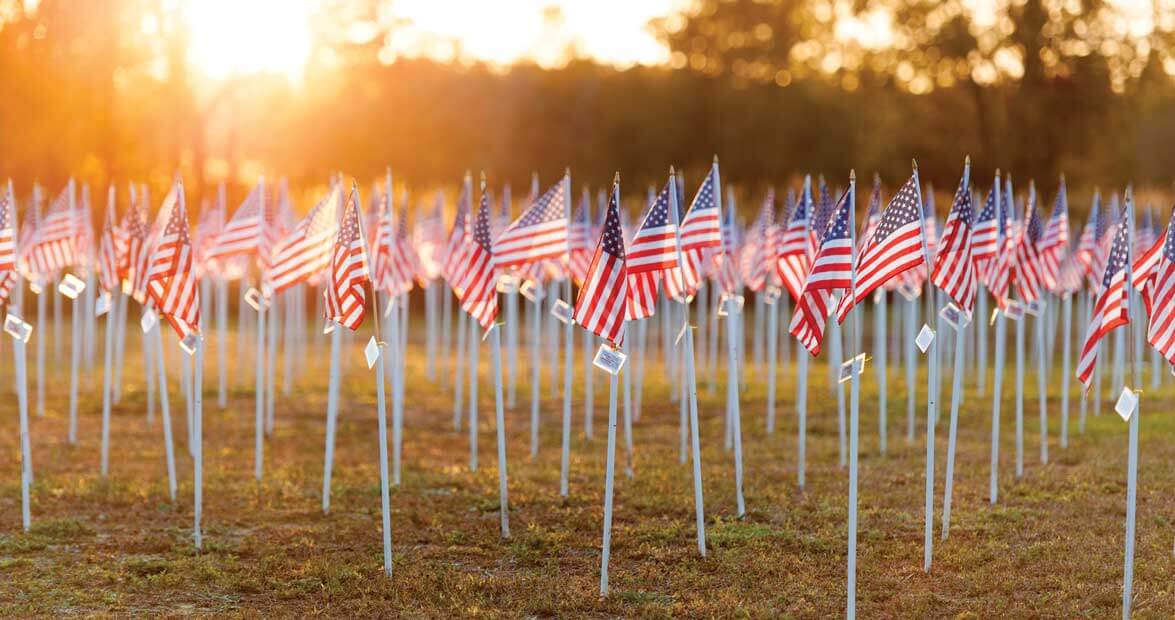 Feature Image: On patriotic holidays throughout the year, hundreds of flags — each tagged with a dedication to a veteran — flutter in the breeze at Veterans Memorial Park in Columbus County.

WHITEVILLE // Around a bend on U.S. Highway 701 in Columbus County, a field of red, white, and blue comes into view. On Veterans Day and other patriotic holidays, a committee including (right to left) veterans Tommy Avant and Randy Norris and Randy’s wife, Angela, meticulously plants more than 600 American flags in the soil. Each flag, dedicated in honor or in memory of a veteran, represents a donation toward the future of Veterans Memorial Park, which the Norrises and other organizers hope will someday include a community center; a museum; and a tribute to every veteran in Columbus County, displayed on a Wall of Honor. 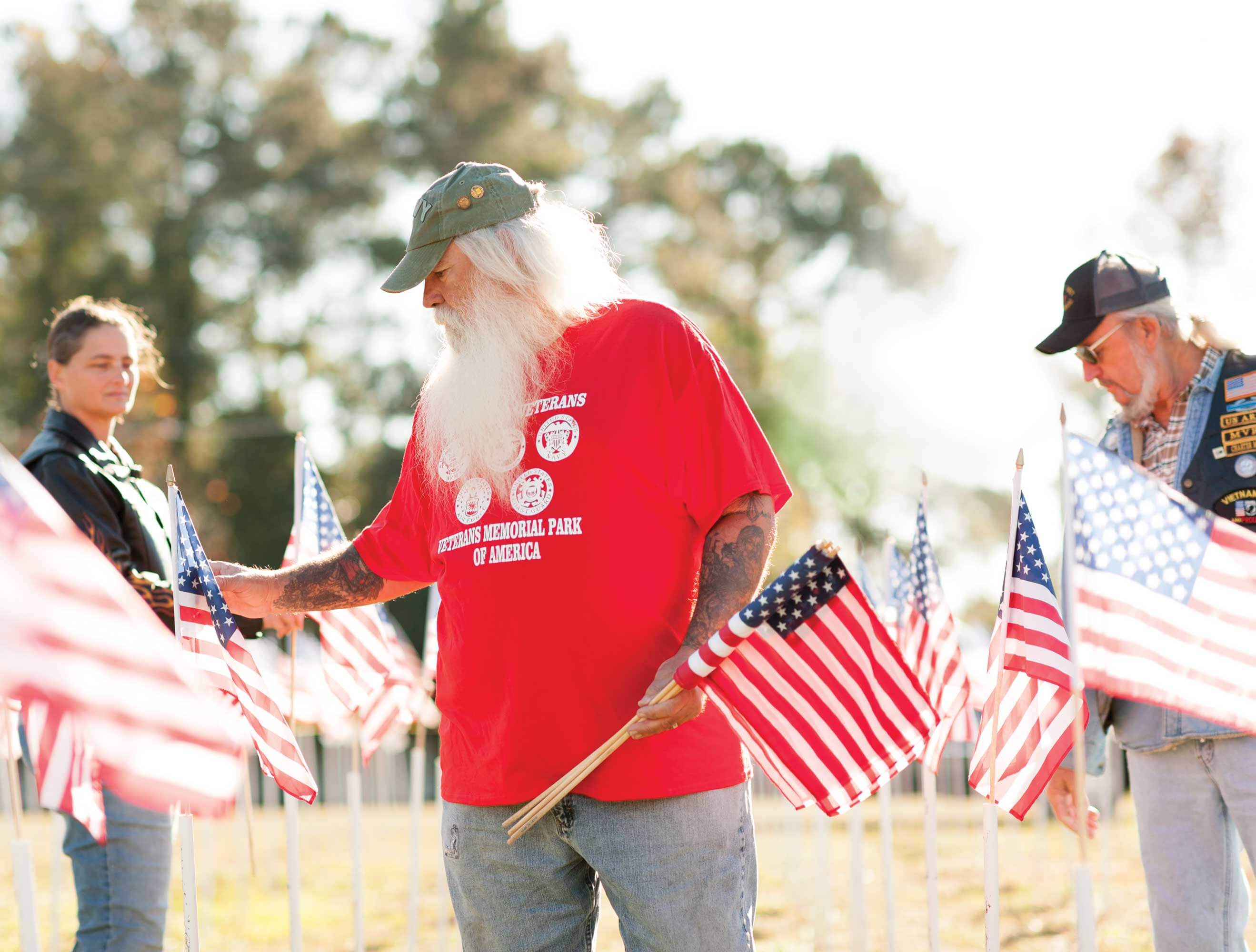 WARSAW // The first time a parade honoring veterans marched through this Duplin County town was nearly a century ago, in 1921, three years after the armistice that ended World War I. That year, Henry L. Stevens Jr., commander of Warsaw’s newly formed American Legion Post 127, organized a parade with a brass band, members of his post and other local servicemen, and schoolchildren on foot and float. The event has continued through the decades — the town has never missed a year — and is believed to be the oldest consecutive Veterans Day parade in the country.

In 2016, the General Assembly recognized it as the state’s official Veterans Day parade. When paraders march through town again on November 3, it will be for the 98th time, a tradition that continues to be carefully preserved and passed down across generations. 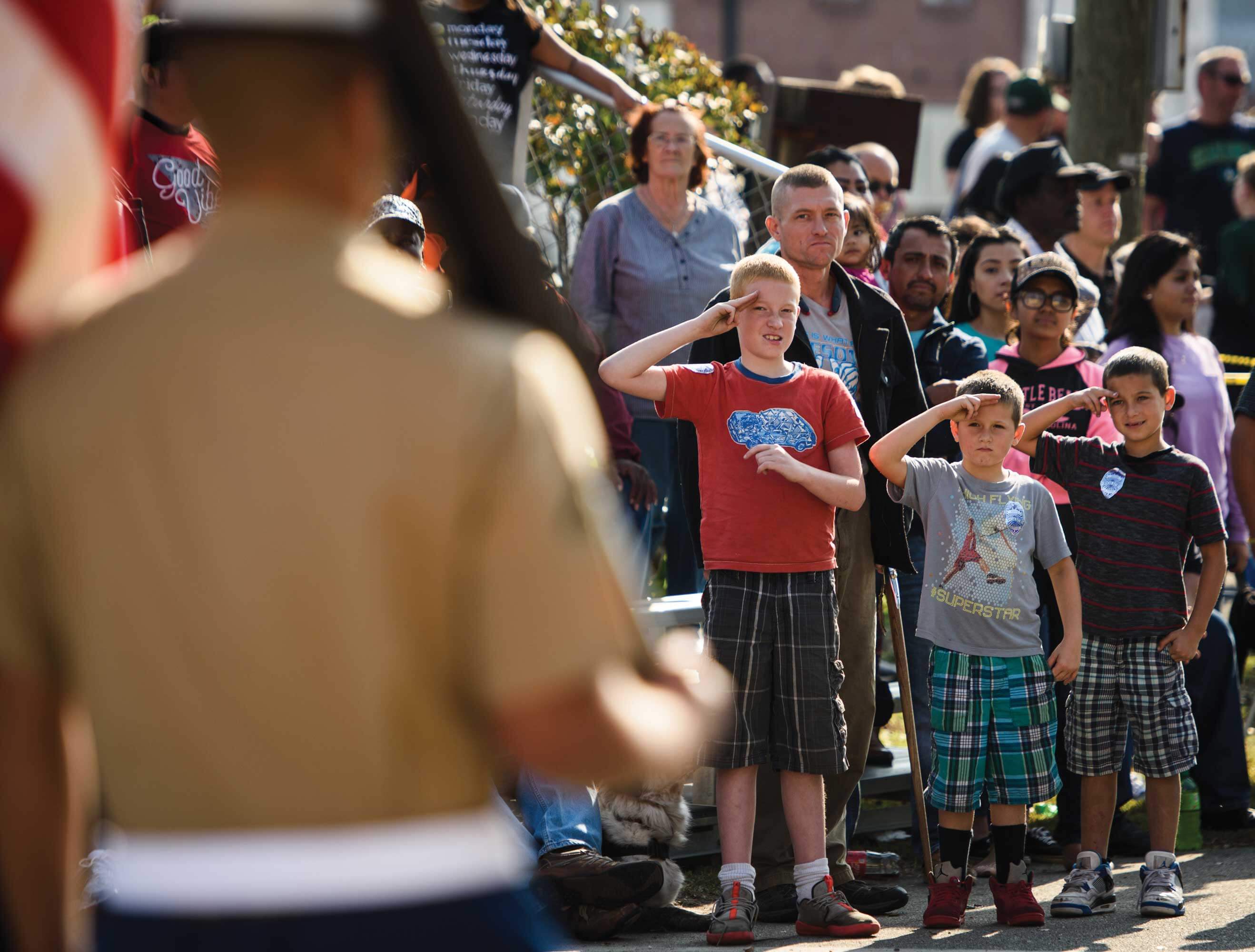 As a Marine Corps Color Guard led the parade down Front Street last year, hundreds of spectators lined the sidewalks, cheering them on. 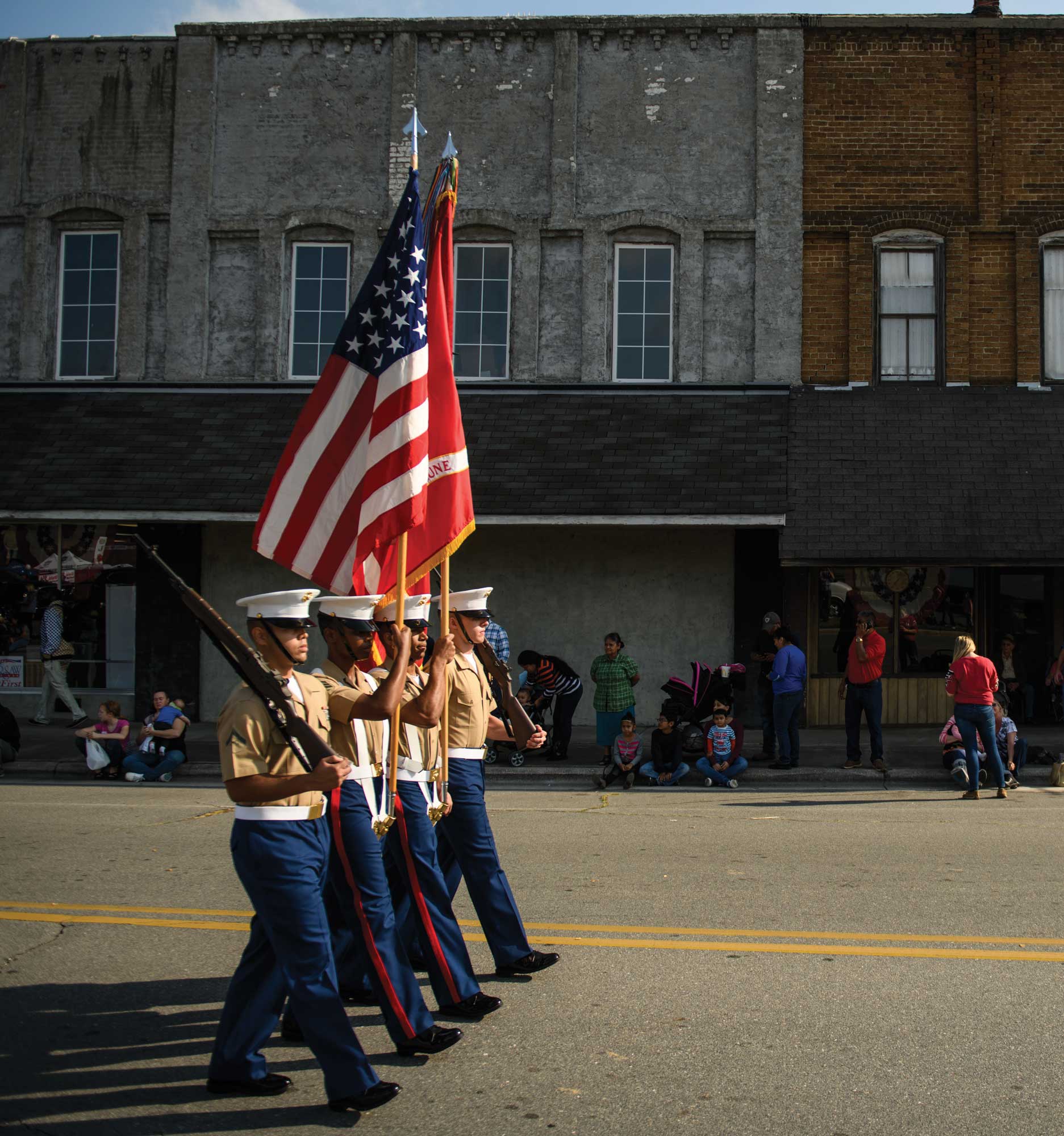 The town of Warsaw is home to about 3,000 residents, but on the first or second Saturday every November, nearly 10,000 people from across the state turn out to show their appreciation. The day’s events include vendors, rides, food, and music, but attendees never forget the reason they’ve gathered: A VFW memorial service, a visit to the Duplin County Veterans Memorial Museum, and the parade itself offer opportunities to learn about and support service members past and present. 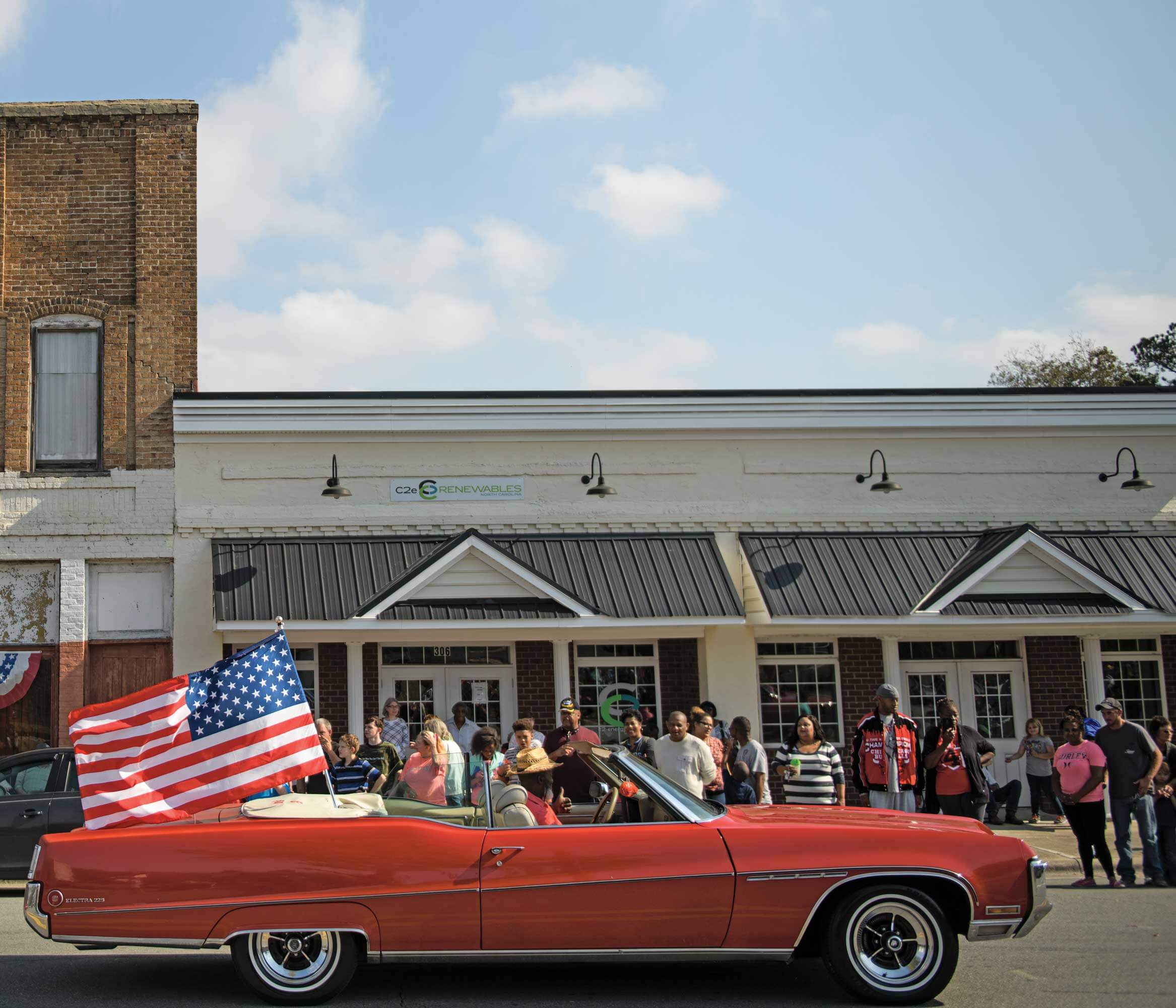 Every year, JROTC squads from high schools across North Carolina march through downtown Warsaw alongside current and former members of the military.

Last year, the U.S. Army JROTC of Union High School in Rose Hill participated in the Veterans Day parade with instructor Lt. Col. Vencent W. Tripp, who retired from the Army after 28 years of service. Military personnel from around the country are stationed at North Carolina bases — including Fort Bragg, one of the largest military installations in the world — but the strength of the state’s JROTC programs shows a homegrown admiration for shared values of citizenship, patriotism, and service. 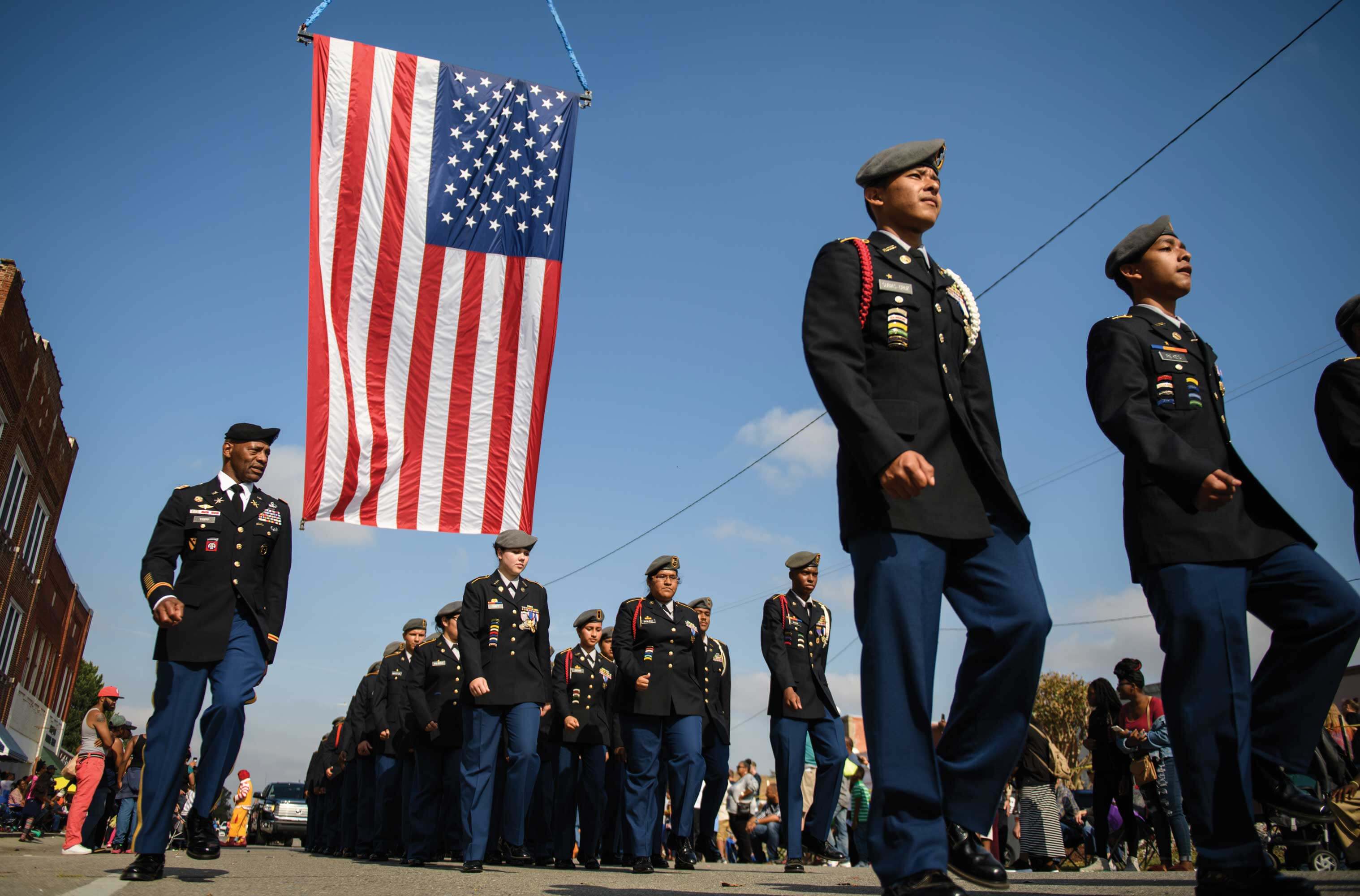 ROXBORO // During World War I, amid the chaos of the Battle of Ypres in 1915, long-dormant poppy seeds were churned to the surface and bloomed — an image captured in John McCrae’s famous poem “In Flanders Fields.” Poppies soon came to symbolize remembrance of soldiers killed in battle.

In observance of the centennial of Armistice Day — the end of World War I and the precursor to Veterans Day — two garden clubs in Roxboro worked together to plant poppies along a stretch of NC Highway 57 dedicated in honor of First Lt. Guy Jennings Winstead, one of more than 86,000 North Carolinians who fought in the Great War. 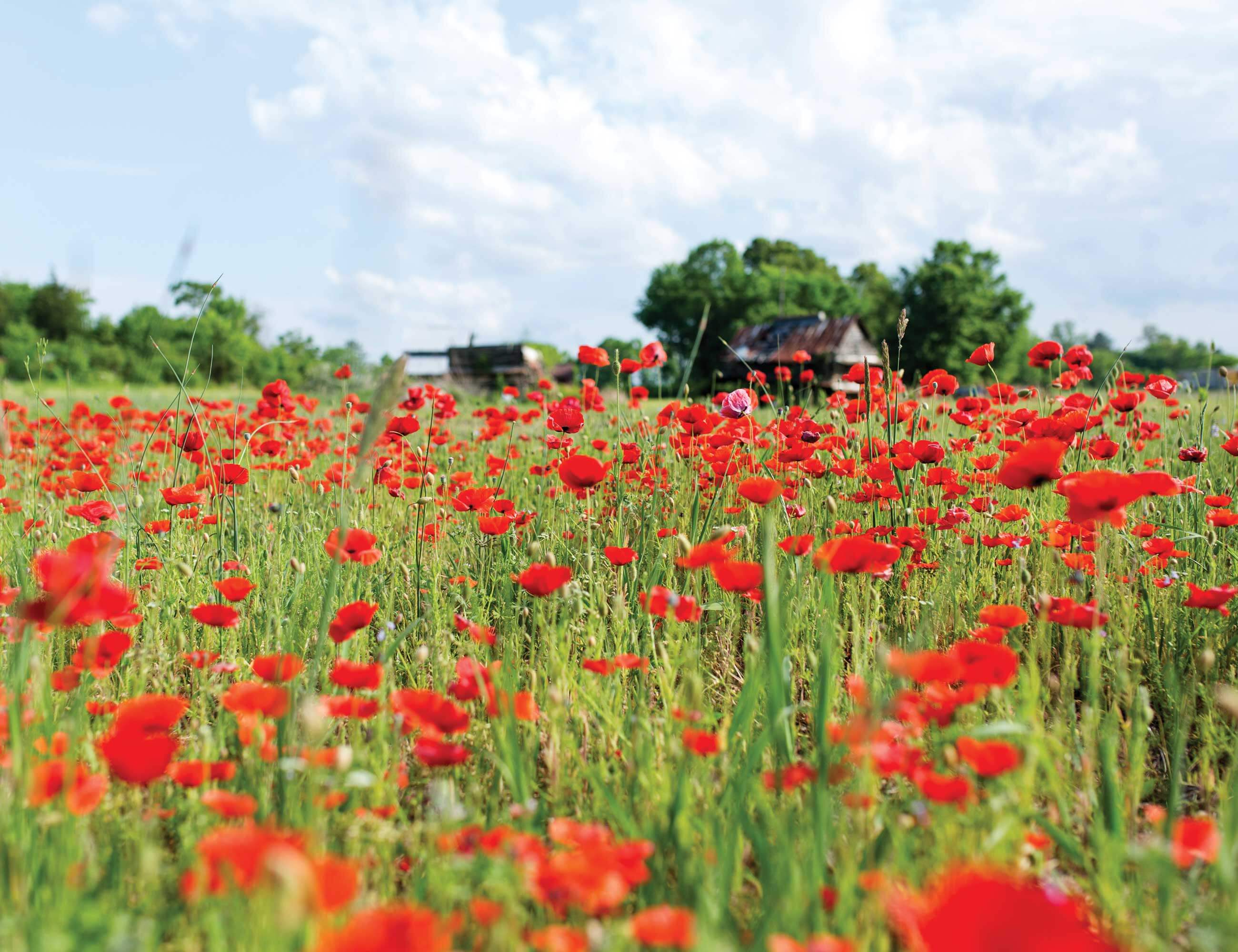 This year’s parade has been cancelled due to Hurricane Florence, but will return in 2019.

MOREHEAD CITY // The procession that marches down Arendell Street every November is believed to be the largest Veterans Day parade in the state. Just 30 minutes long when it began in the mid-’90s, Morehead City’s Veterans Day parade has grown to fill nearly two hours.

Last year, the event featured more than 2,000 participants, including members of the Second Marine Aircraft Wing Band, based at nearby Marine Corps Air Station Cherry Point. As the players marched in formation behind their drum major, Gunnery Sgt. Monica A. Preston, brass horns gleaming in the sun, they proudly represented the Marine Corps through music. 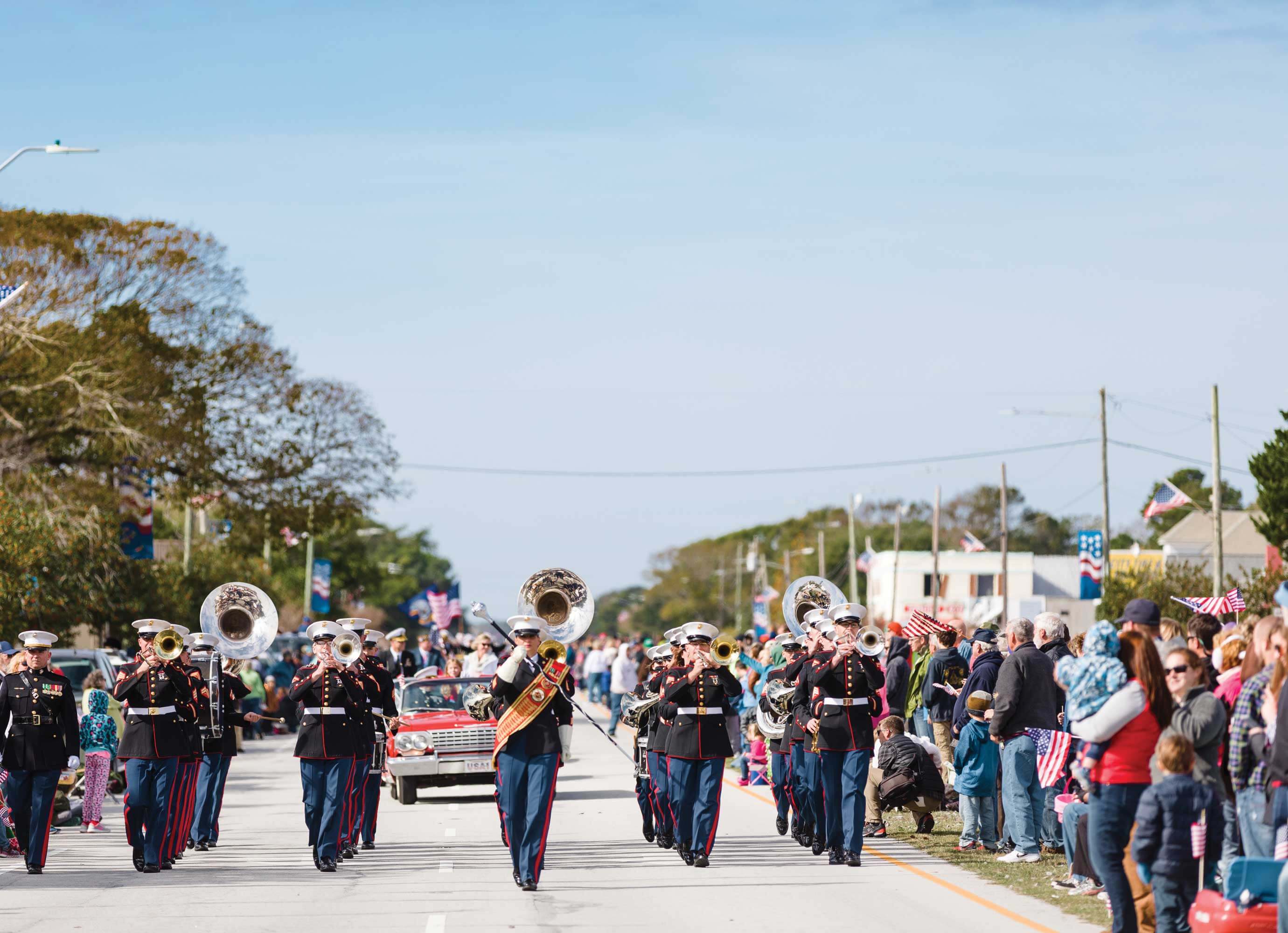 The parade is a point of pride for the thousands of spectators who line Arendell Street — and even more so for the participants. 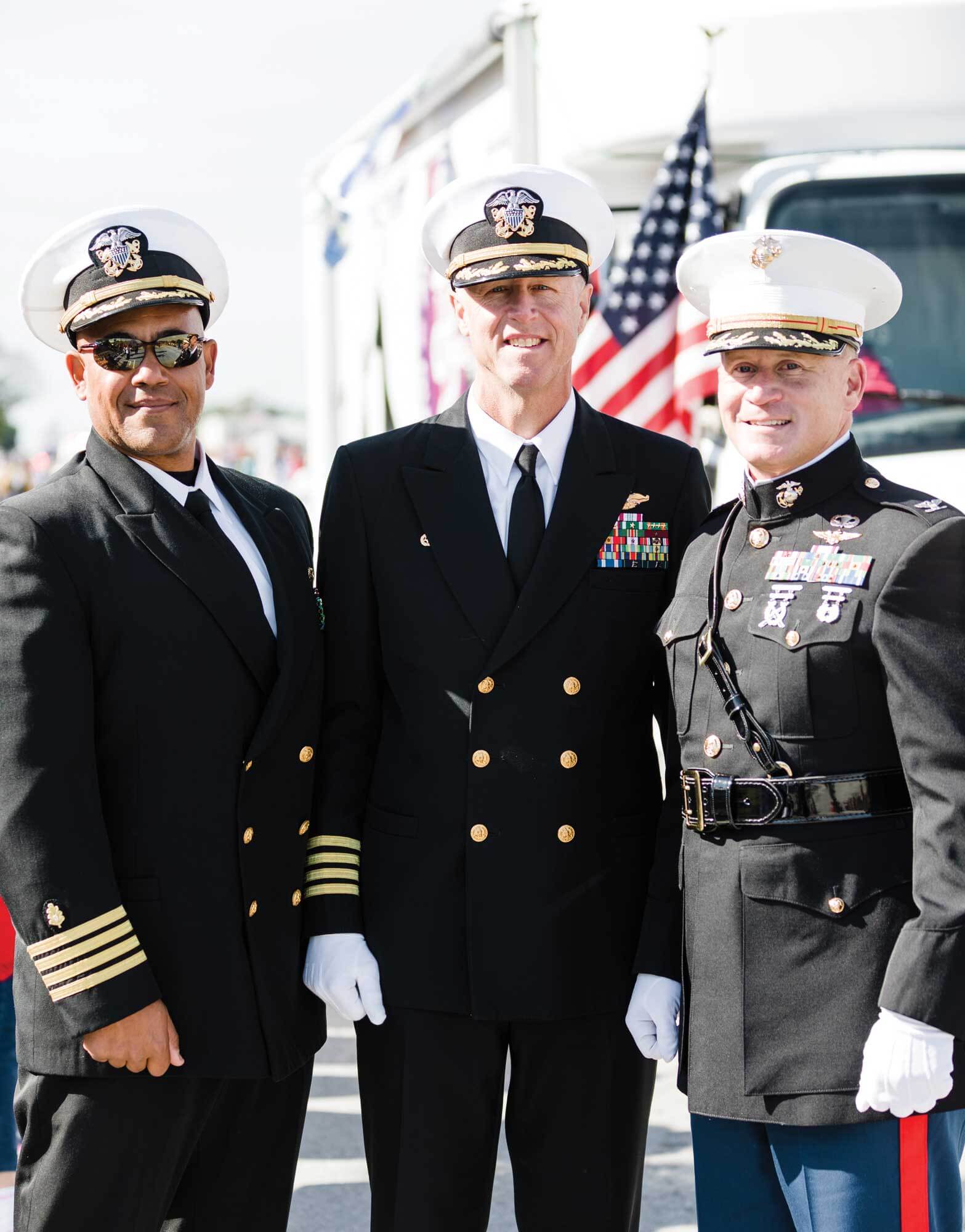 Civilian participants included Carrie Baker and Larrington Chadwick, who rode with The Kindness Crew, a volunteer organization based in Down East Carteret County. 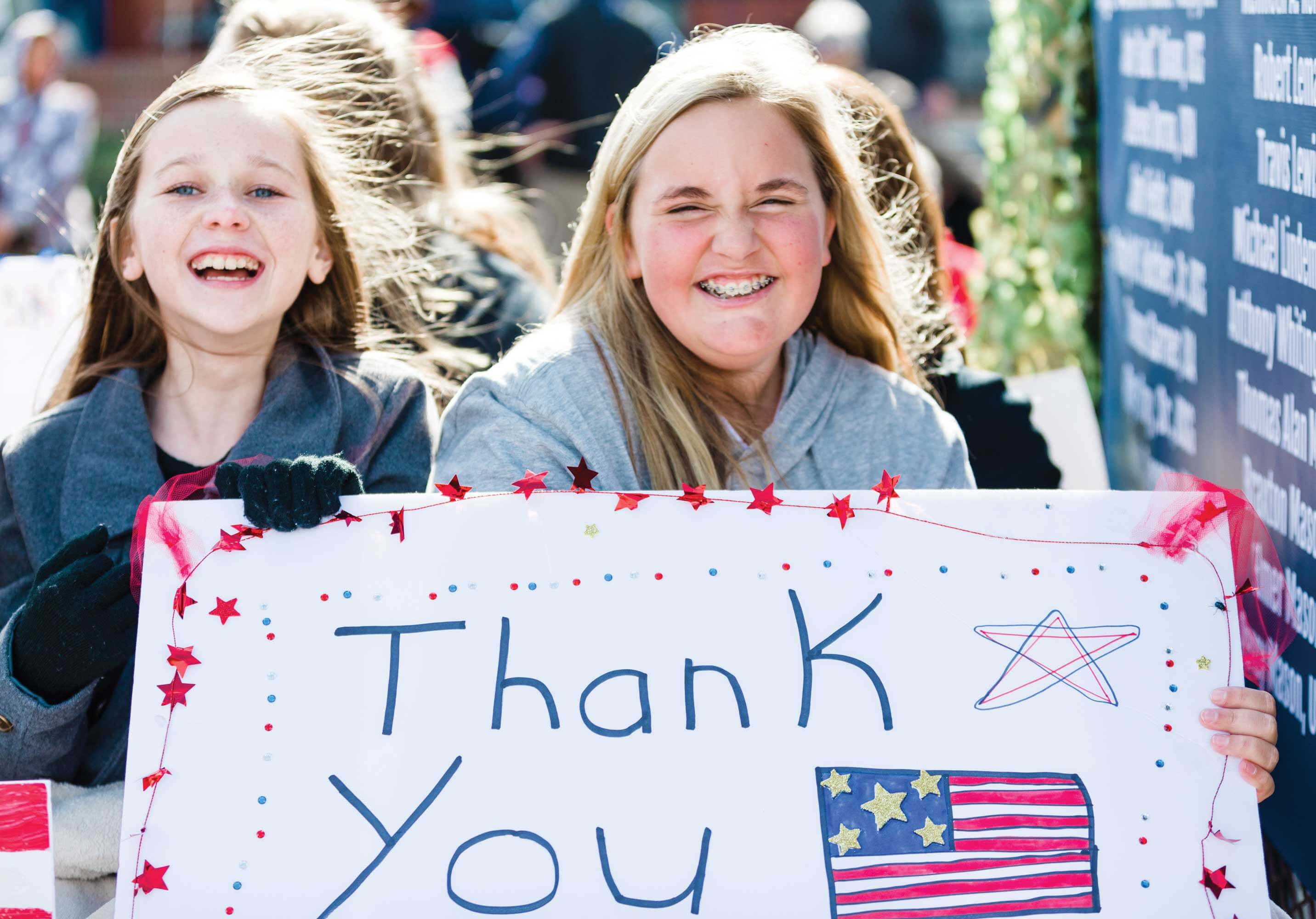 Veteran Joe Beam of Cedar Point, who served in the Marine Corps during Vietnam, paraded on behalf of VFW Post 9960 in Swansboro. 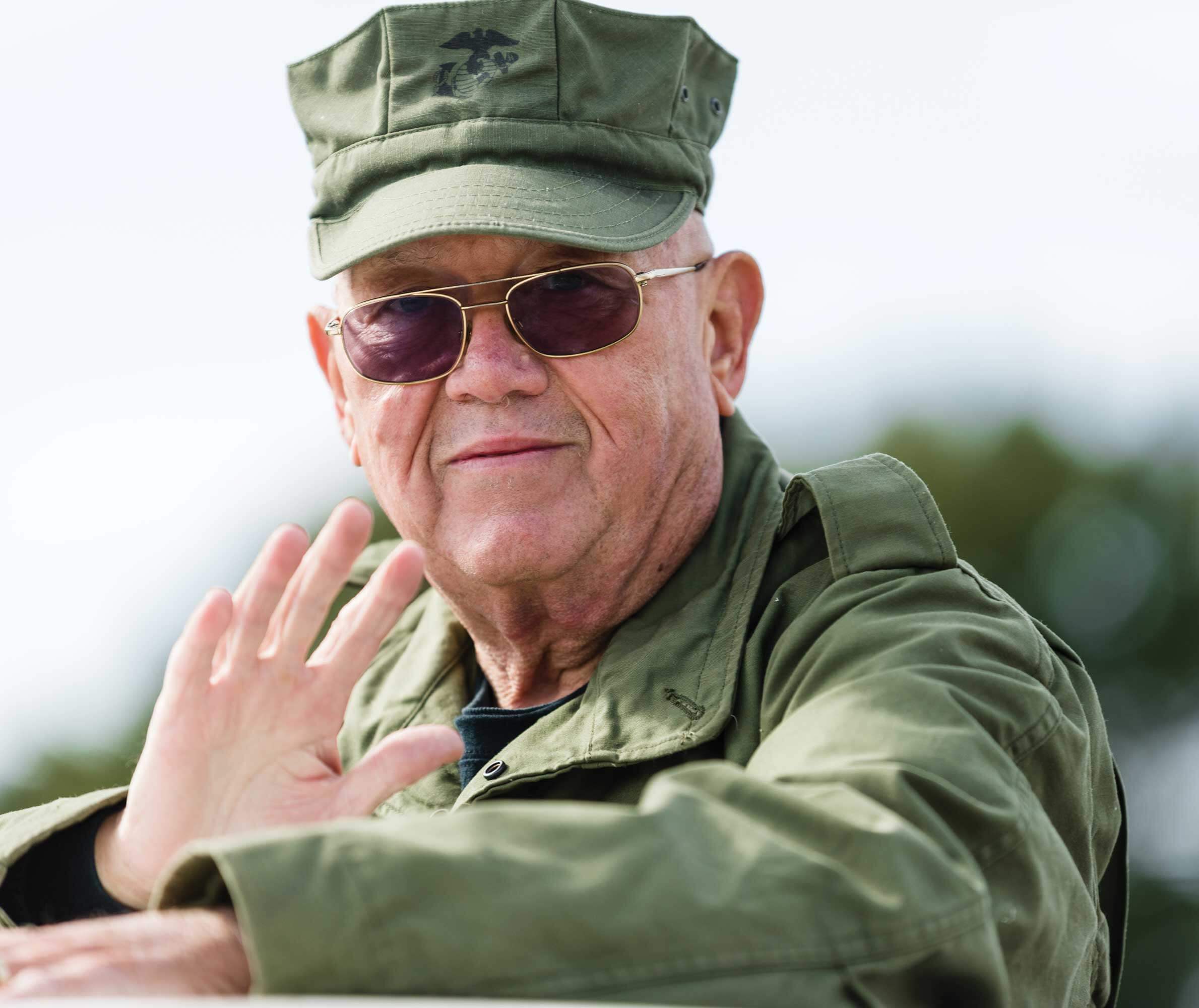 Every year, residents of Carteret County and visitors from across the state eagerly anticipate the parade’s sights, sounds, and spirit of patriotism, embodied by the Marching Mariners of East Carteret High School in Beaufort, the color guard from Croatan High School in Newport, and members of American Legion Post 99 in Beaufort, riding in a trailer pulled by the Crystal Coast Tractor Club. 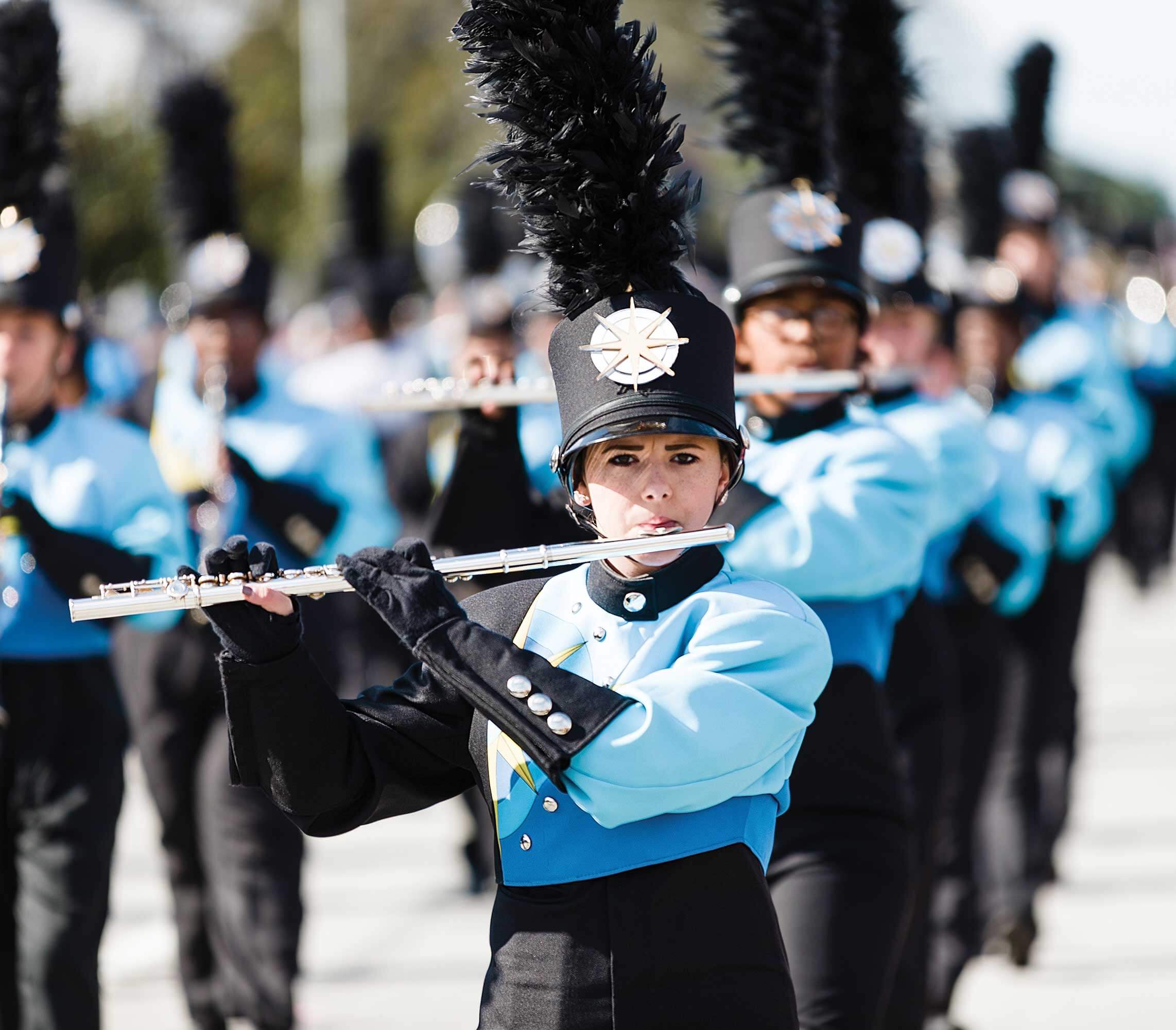 Unfortunately, this year’s parade has been canceled due to damage from Hurricane Florence, but military members and civilians alike look forward to rebuilding and preparing for next year’s celebration.

KERNERSVILLE // A 57-foot granite obelisk reaches proudly toward the sky, surrounded by flags and educational signposts, engraved pavers and five monuments representing branches of the military: Air Force, Army, Coast Guard, Marine Corps, and Navy. Dedicated in 2014, the Carolina Field of Honor at Triad Park — the largest veterans memorial on the East Coast outside of D.C. — has been the passion project of Bill Moss, a Marine and founder of the North Carolina War Memorial Foundation.

In a park shared by Guilford and Forsyth counties, the foundation created a sacred space to reflect and pay respects to the men and women of the Armed Forces, especially the more than 150,000 who live in the Triad. 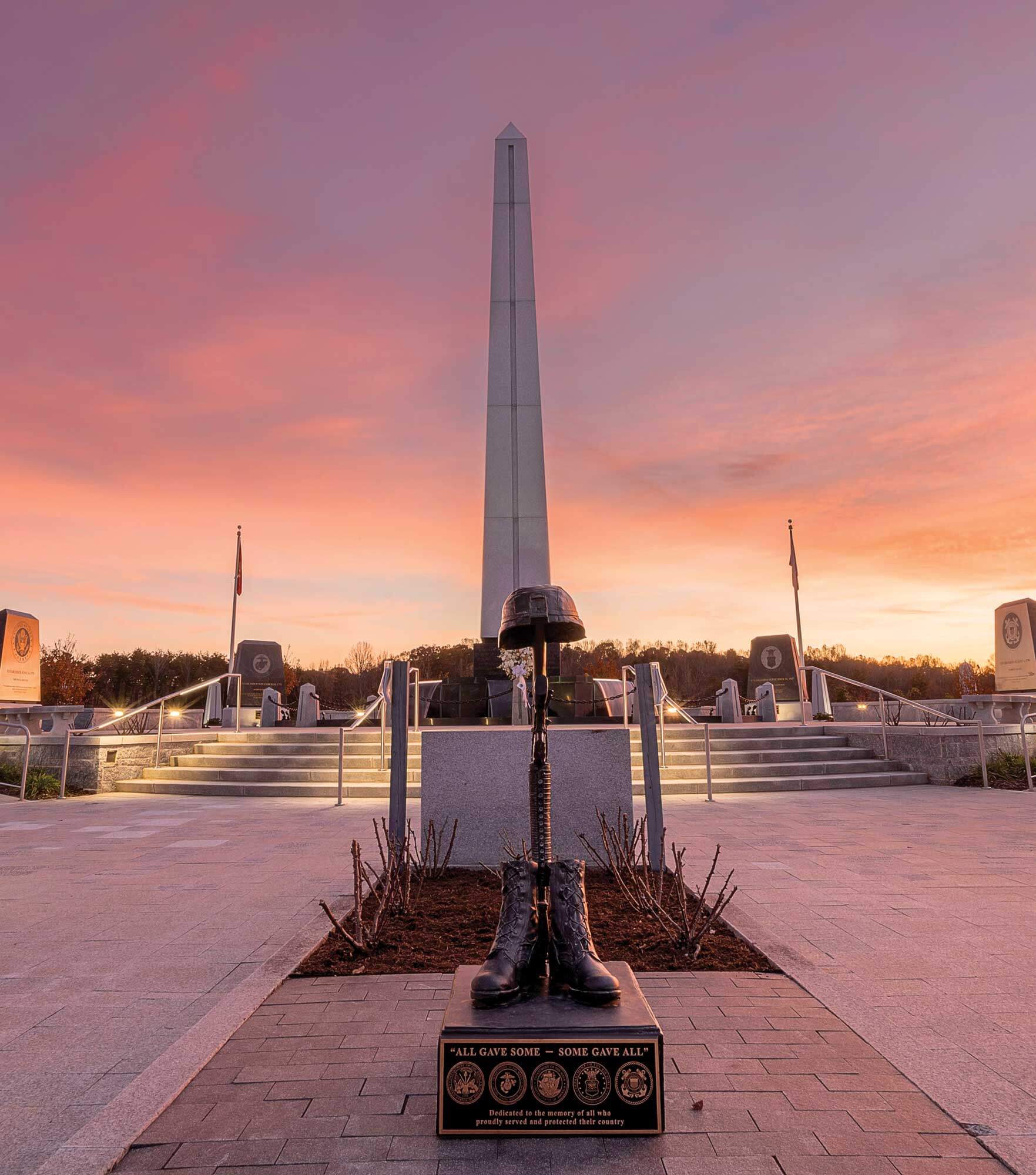 On Veterans Day, the power of this place is deeply felt, in the bagpipe music that opens the ceremony and in the taps call that closes it. And in the solemn moment, last year, when Moss (left) and keynote speaker Gen. David Rodriguez laid a wreath at the Fallen Soldier monument — a symbol of remembrance. 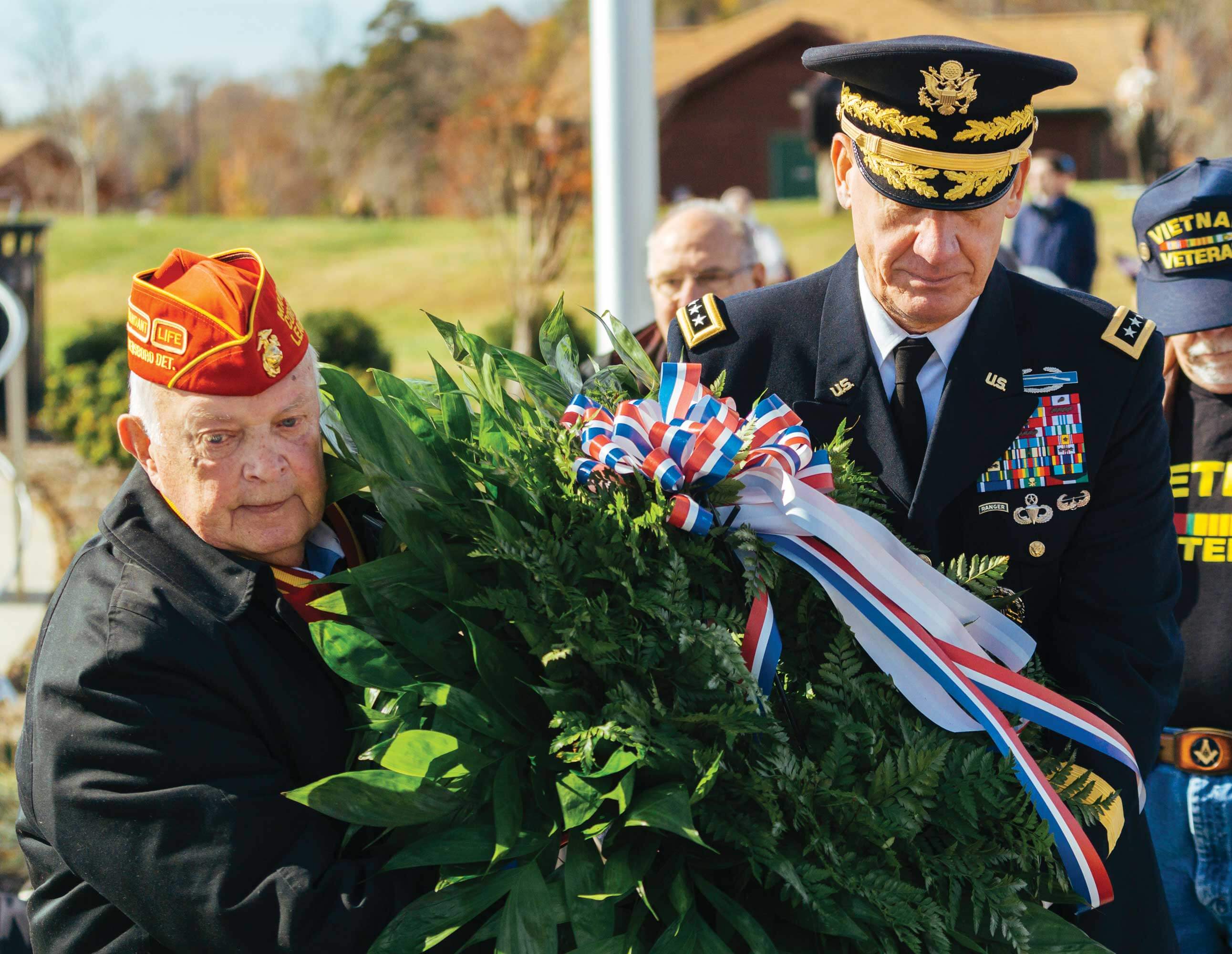